Thanksgiving is one of the most exciting times of the year. Not only do we get to feast on a delicious dinner, complete with turkey, potatoes and amazing desserts, we also get to spend time with family. We all celebrate it in different ways, and as the following photos of Vintage Hollywood stars show, some do so in rather strange ways. 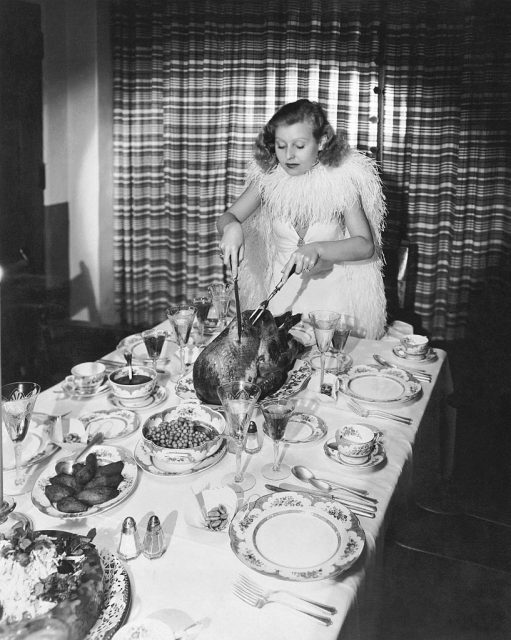 Celebrities always go overboard when it comes to dressing up for special occasions, and Lillian Harvey was no exception. Here she is carving a Thanksgiving turkey while dressed in a gorgeous dress and boa. Hopefully, none of the feathers got into the food! 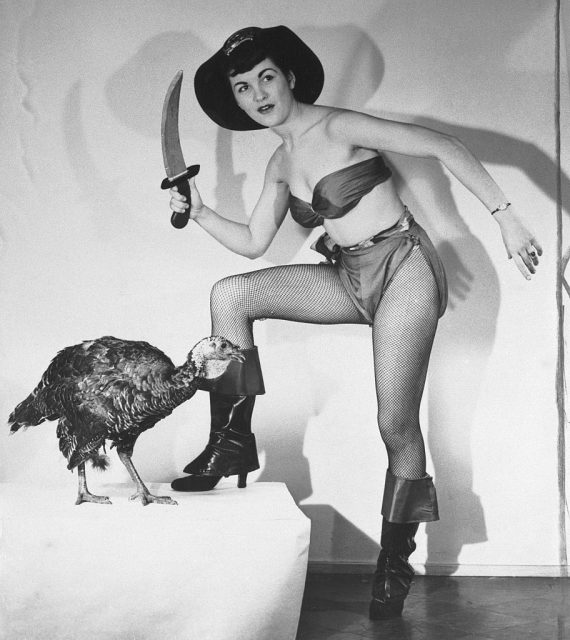 Who says you can’t get dressed up to massacre a turkey? Miss Ohio 1949, Flo Bondi, dressed up as a pirate to perform the task, complete with swashbuckling boots and a sword! 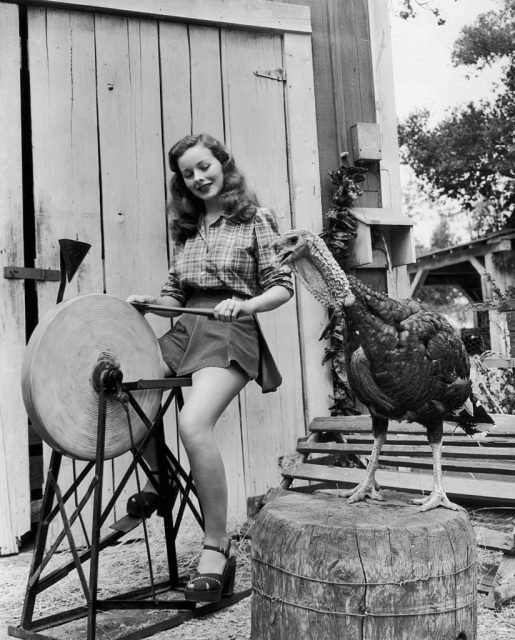 Here we see actress Jeanne Crain sharpening an ax before using it to slay this turkey, who appears to be none-the-wiser. Poor thing, here it thought it was just arriving on set to take a few pictures…

Also, if you ask us, Jeanne looks far too excited about sharpening that blade. 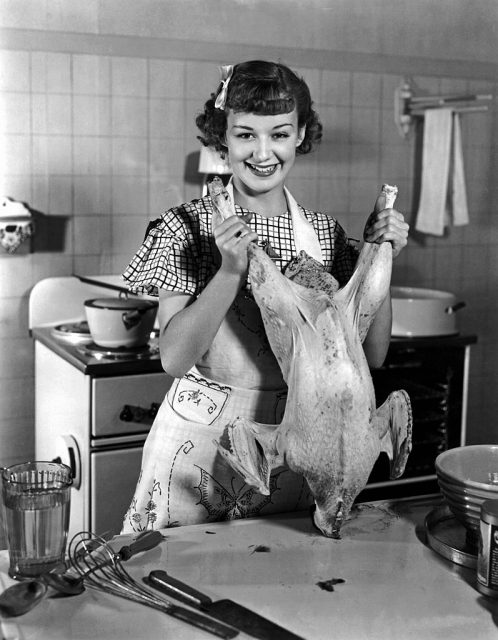 Here we have Anne of Green Gables actress Anne Shirley prepping a turkey for Thanksgiving dinner. We’re honestly not sure what to make of this picture… It’s unnerving for a reason we can’t quite put our finger on.

Dogs are so out – turkeys are our pet of choice 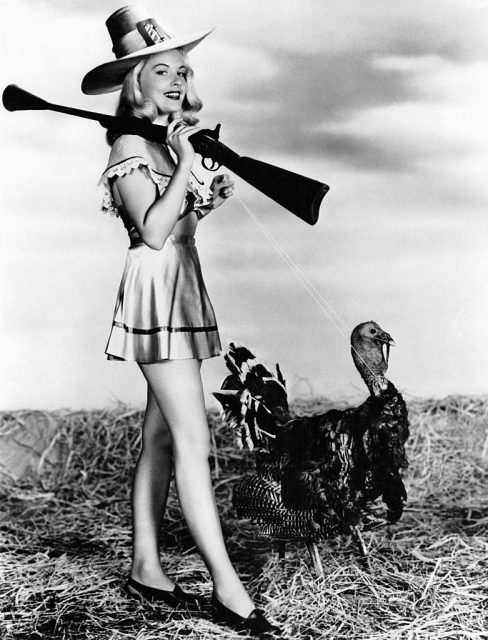 The majority of normal people own a pet dog that they’ll take for regular walks, but not Barbara Bates. The star of All About Eve decided to switch things up in 1950 by taking a wild turkey for a stroll. By the looks of the shotgun in her hand, it may have been the bird’s final walk before, you know… 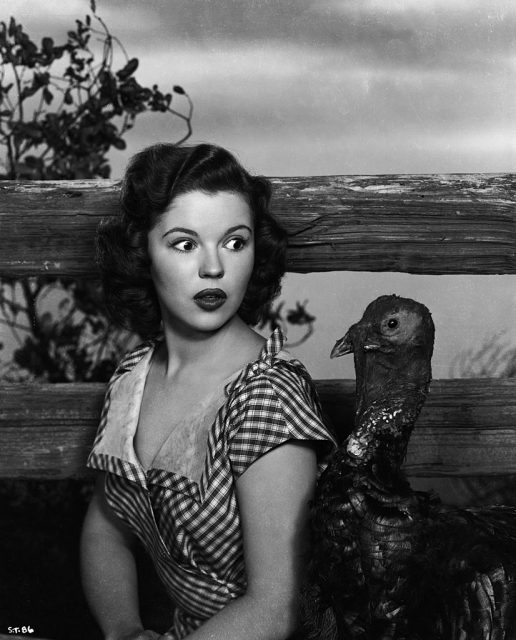 Judging by Shirley Temple‘s face in this picture, we’d say this turkey snuck up on her during the photoshoot. We can’t fault it, though – who says only actresses deserve the spotlight?!

A little weary of the turkey 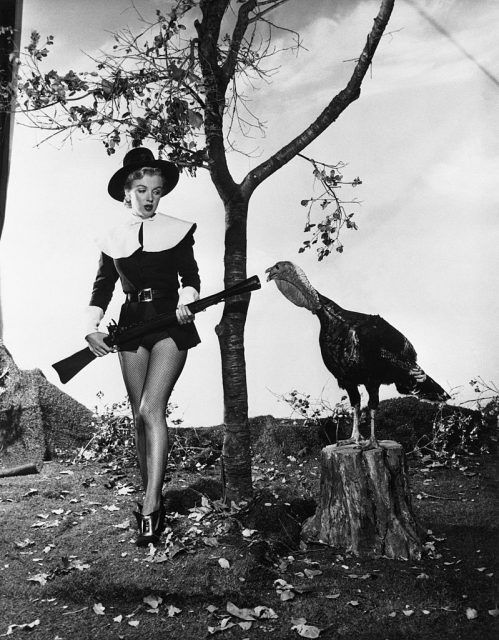 We’re not quite sure wearing heels while hunting a turkey is the most effective way to nab your prey, but that’s exactly what the blonde bombshell herself, Marilyn Monroe, wore for this outing. By her expression, it appears she may have been regretting her decision… 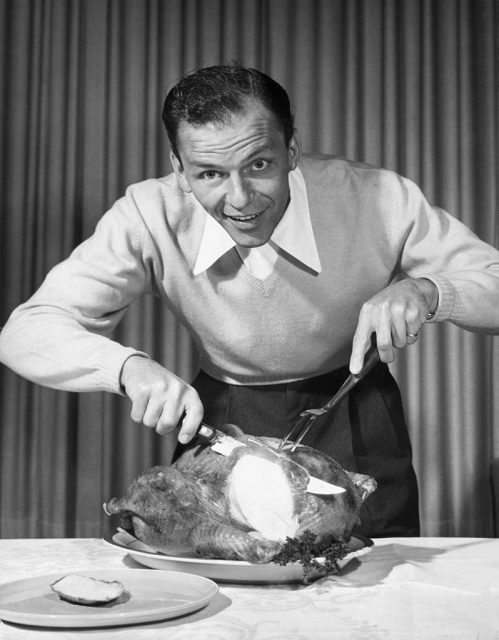 It looks like crooner Frank Sinatra is ready to tuck into a delicious-looking turkey dinner – he even dressed up for the occasion! We bet everyone on set was lining up with their plates. 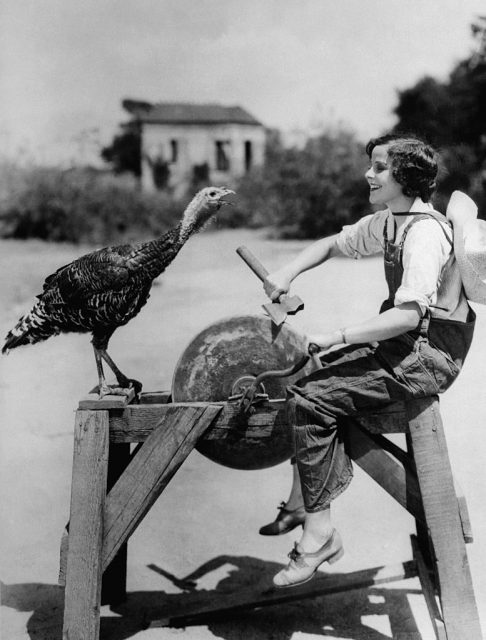 Does anyone else think it looks like this turkey is yelling “NOOOOOOOO” to Barbara Kent while she sharpens her ax? On the flip side, she looks like she’s laughing at its despair, so… Guess it was out of luck.

Why ride a horse when you can ride a turkey? 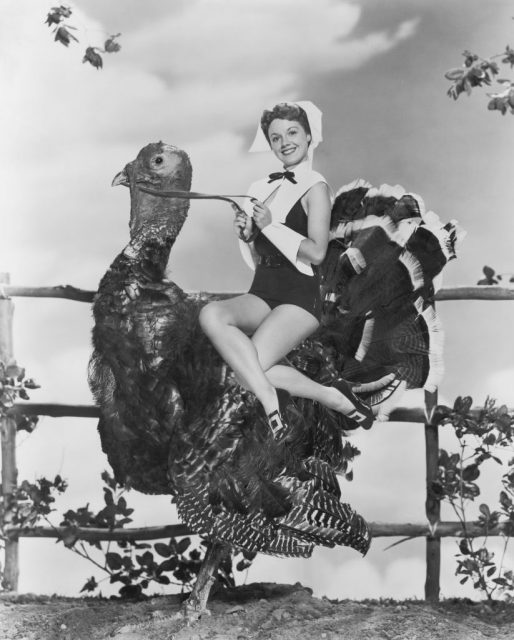 This is definitely one of the stranger publicity photos to be released during the 1900s. Here we see actress Virginia Gibson riding an unusually large turkey, while dressed as a pilgrim… If this doesn’t scream “Thanksgiving,” we don’t know what does!

Stand still and maybe it won’t see you 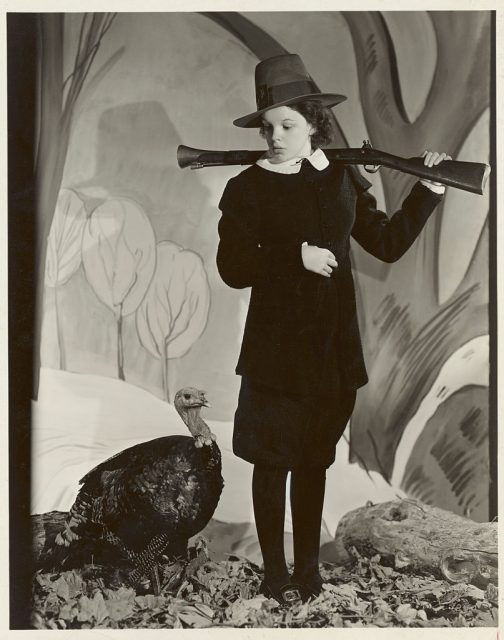 Here we see famed child actress Judy Garland dressed as a pilgrim and looking wearily at a turkey. Considering she stood up against the Great and Powerful Oz in 1939’s The Wizard of Oz, we think she could take that animal, no problem.

Animals are the best co-stars 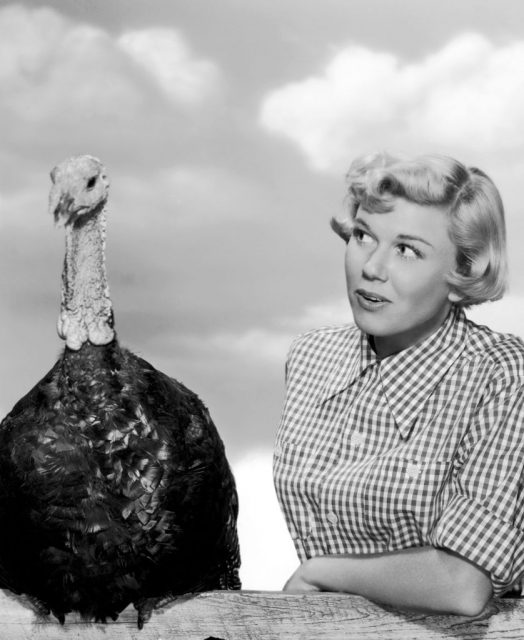 One of the best things about working on a film set is when you get to star alongside animals. Sure, humans are able to memorize their lines and act on cue, but there’s something so cute about seeing an animal work its magic for the camera. Here we have Doris Day alongside her turkey co-star on the set of By the Light of the Silvery Moon. 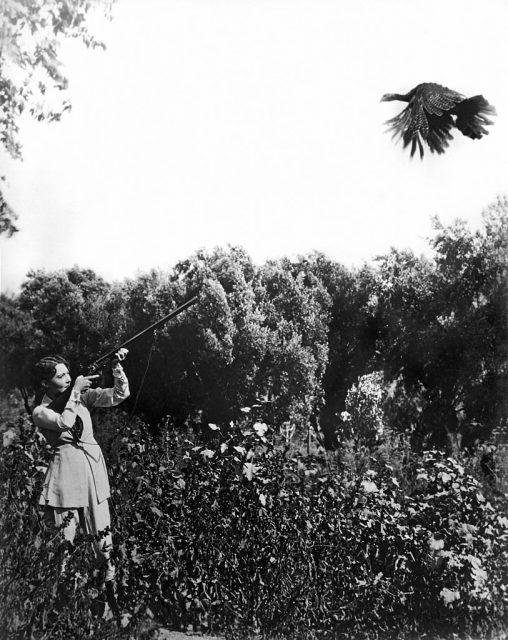 Aiming a shotgun at a moving target isn’t the easiest thing, but actress Dorothy Sebastian seems to know exactly what to do. Just look at her form and the precision of her aim – we wish we could find out if she managed to shoot the bird down! 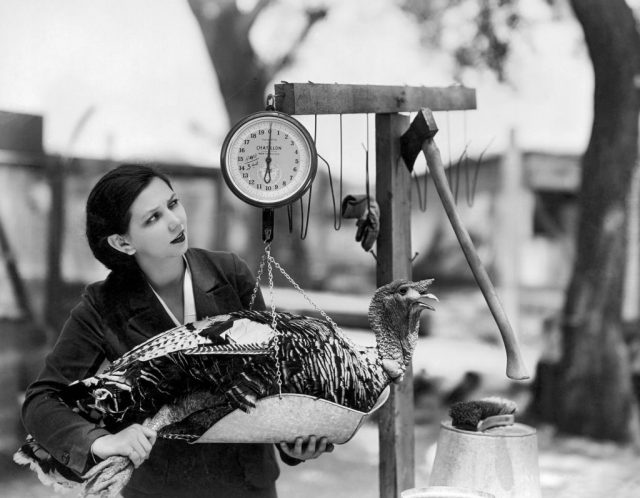 We think the alt image description of this photo says it all: “Hal Roach comedienne, Patsy Kelly (1910-1981) is getting ready to put an end to Tom the Turkey.” Poor Tom… At least he lived a good life. 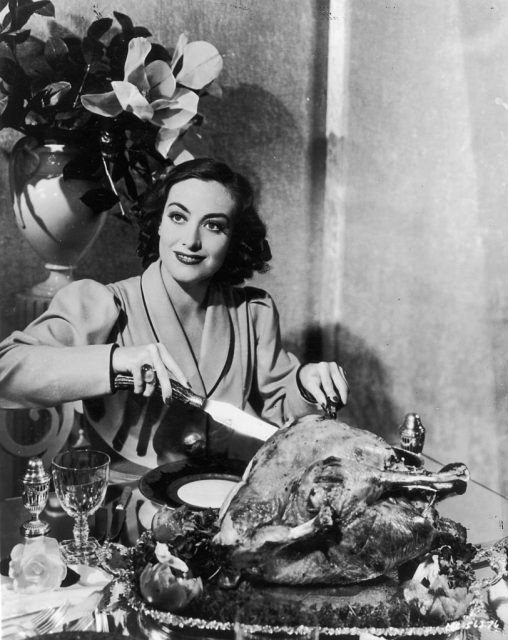 There’s nothing better than digging into dinner after a day of cooking. However, by the look on Joan Crawford‘s face, it would appear she’s thinking, “Why the hell am I carving this turkey when I’m rich enough to hire someone else to do it?” 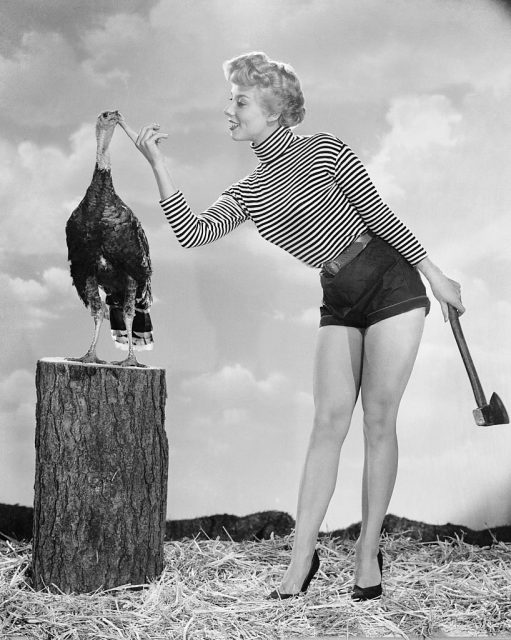 More from us: Vintage Snapshots of Women Posing with Pride Next to their Christmas Trees

Closing out our list of awkward celebrity photos is this one of actress Adelle August, who appears to be befriending a turkey before preparing it for Thanksgiving. Too bad it couldn’t see the ax hidden behind her back.

« Steve Martin, John Candy And A Whole Lot Of Trouble! Facts About ‘Planes, Trains And Automobiles’
17 Colonial-Era Items That Most Modern Americans Would Have No Idea How To Use »