In Colonial America, people were always coming up with new methods or devices to make a harsh life a little easier.

Here are some of the weirdest items Colonials used back in the day.

Colonial Americans lived off the land, with the men tending the fields and bringing home meat for the table.

A shingle froe might look like a short pickaxe, but its purpose was to cut wood rather than stone. Specifically, it was used to cut straight pieces of wood to be used as roof shingles. The froe would be lined up along the direction of the grain of wood and then hit with a mallet. 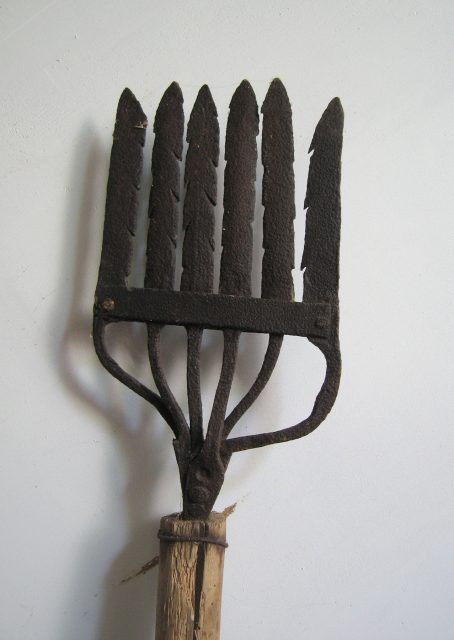 If you wanted fish for dinner, you might employ a gig ”“ a short-handled multi-pronged spear. The tines had extra barbs on them to make sure whatever you speared wouldn’t wriggle away. It could be used to catch fish, frogs, and eels. 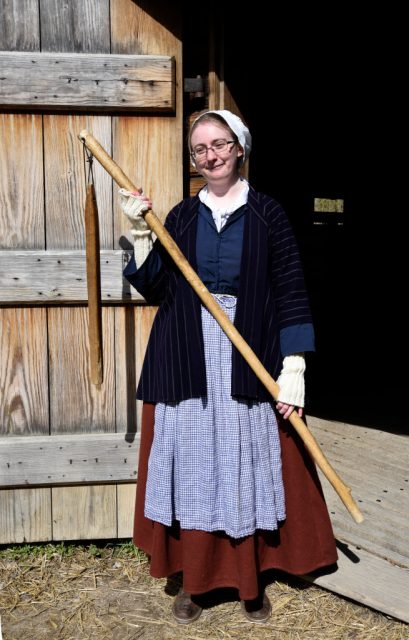 A guide in period costume stands at the entrance to the recreated 16-sided barn at Mount Vernon, the plantation owned by George Washington, the first President of the United States, in Fairfax County, Virginia, near Alexandria. The guide is holding a flail, an early threshing tool used to separate wheat from chaff.  (Photo Credit: Robert Alexander/Getty Images)

This strange-looking device was an essential tool in Colonial times. The farmer held a long piece of wood, at the end of which was a leather strap or chain attached to a smaller piece of wood (known as a swingle, swipe, or swipple).

The flail was used to beat (or thresh) grain so that the seeds could be separated from the husks.

While the men were out tending the land, women would stay at home and make clothes, food, and other homely items. 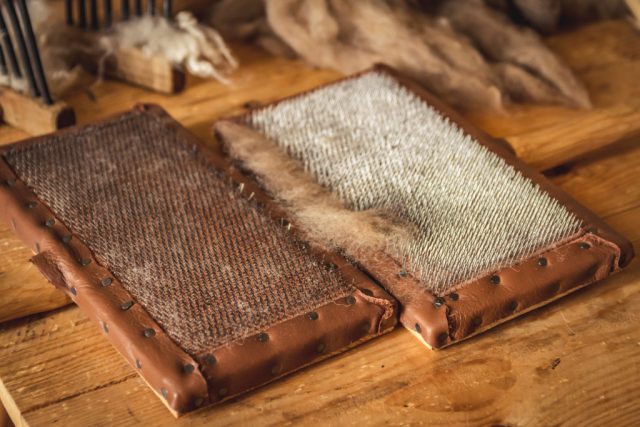 With no pre-made fabrics available, Colonial women had to make their own, right down to spinning the individual threads.

When wool was taken from a sheep, it would be full of tangles and debris. By pulling the wool back and forth between two cards of wire teeth, the wool was softened, cleaned, and left with all the strands pointing in the right direction, ready to be spun into thread. 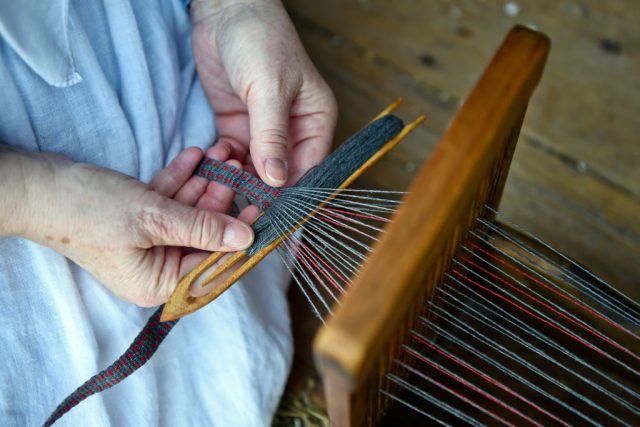 Zippers hadn’t been invented yet, so Colonials used handwoven tape to fasten their clothes. Women would use a tape loom to weave narrow bands of fabrics that could be used to tie up aprons, hats, bags, and clothes. 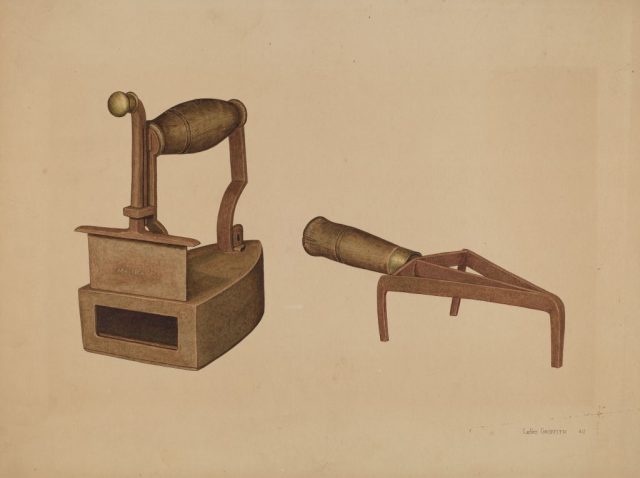 Once you’d made your clothes, you might want to iron them. The iron itself was simply a large lump of metal that was heated in the fire, so putting it down on a surface would likely leave a permanent mark.

To address this, trivets were invented instead, allowing women to put the iron down without damaging their surfaces.

Education and playtime for the children

Childhood looked a lot different from how it is today. 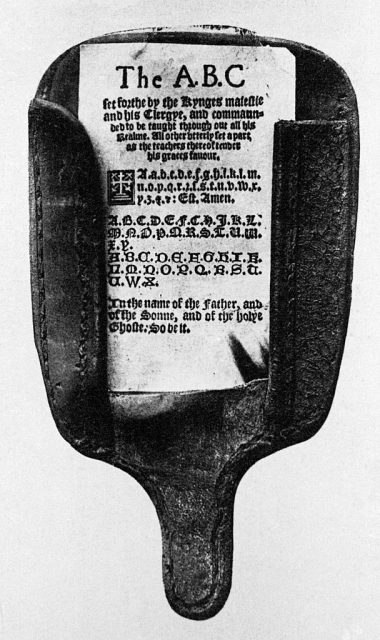 A one page primer with a horn covering once used to teach reading basics. (Photo Credit: Bettmann / Contributor)

Despite its misleading name, a hornbook wasn’t a book at all but a board used to help children learn the alphabet, numbers, and the Lord’s Prayer. The information would be written on paper, attached to a board made of wood or leather, and then a thin layer of transparent horn was fitted over the top to prevent damage to the paper. It could then be used for generations of children over and over again. 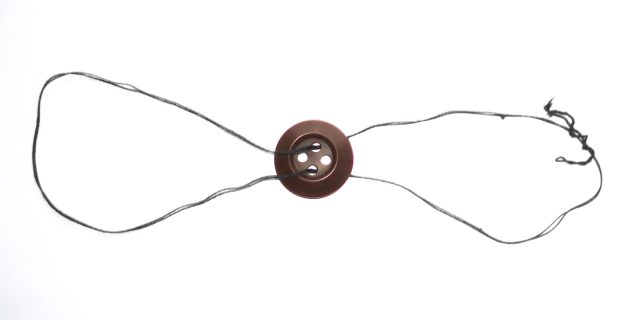 Toys for children were far simpler in that time, often made from materials found in the home.

One example is a whirligig, which was a piece of string threaded through a disc (such as a button or a piece of bone or clay with two holes in the middle). Pulling the string tightly and then releasing it would set the central disc spinning, providing hours of entertainment. 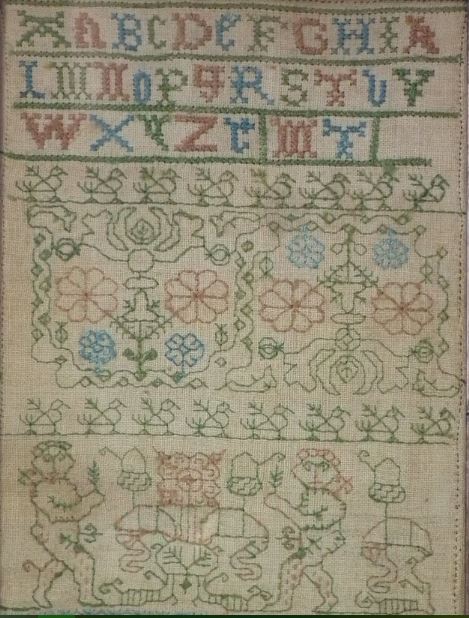 If a woman wanted her family’s clothes decorated, she would have to embroider them herself. Consequently, young girls were taught how to embroider from a young age through the use of samplers. This was a piece of cloth that a girl would decorate with a variety of stitches and patterns.

Samplers would be stitched with everything from a biblical scene to a poem or simple numbers and letters.

If you sat down at a Colonial dinner table, you might find quite a few differences. 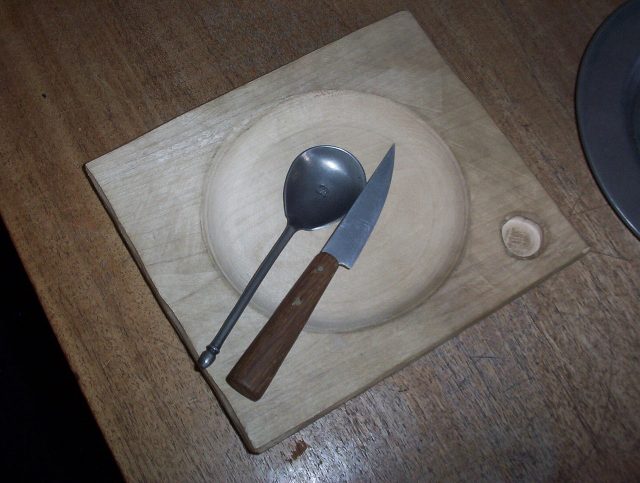 Before china plates, there were trenchers. These were rectangular dishes made of thick wood, slightly hollow in the middle so your food wouldn’t leak over the edge.

Basically, everyone in Colonial times was eating off cheese boards… 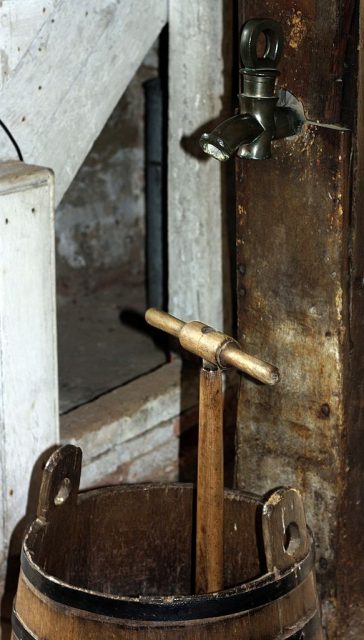 There was no popping down to the local store for some pre-packed butter ”“ you had to make your own! A churn was used for just this purpose. Cream or whole milk would be poured into the container where it would then be ”œagitated” or ”œchurned up” using a pole. 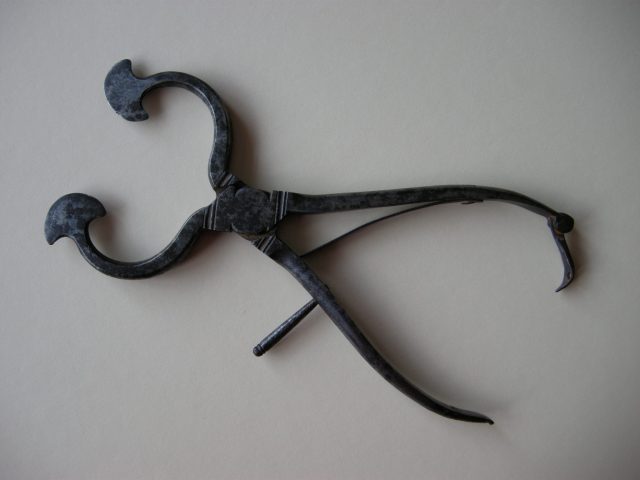 In Colonial times, sugar didn’t come in bags but in large cones or blocks. Sugar nips (also known as sugar shears or sugar cutters) were pincers with blades that would be used to detach a small amount of sugar from the larger block. It could then be stirred into tea like a sugar lump or ground in a pestle and mortar to use in cooking. 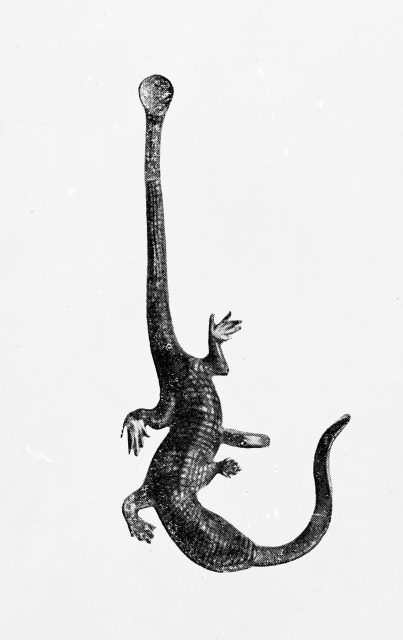 Toothpick and ear-scoop in from of a lizard (Photo Credit: Wellcome Collection gallery, CC BY 4.0)

After you’d finished eating, you’d want to take care of your pearly whites by employing a metal tooth picker. Rather than the disposable wooden ones we have today, these were made to last and be used repeatedly.

As well as getting bits out of your teeth, this device could be used to get dirt out from under your nails or wax out from your ears (let’s hope they washed it in between).

For when the night draws in…

No TV, central heating, or electricity made evenings in a Colonial home very basic. But there were a few devices that could add a bit of luxury or warmth. 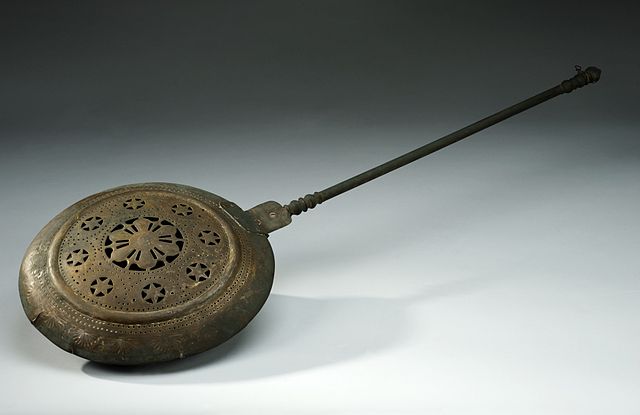 If blankets alone weren’t enough to keep you warm on a cold night, you might try a warming pan.

The circular pan could be opened and hot coal put inside. The pan was then closed and rubbed over the sheets, warming them up nicely. The long wooden handle would protect the fingers from being burned on the hot metal.

You had to be careful not to leave the warming pan in one place too long though, or it could end up scorching the sheets. 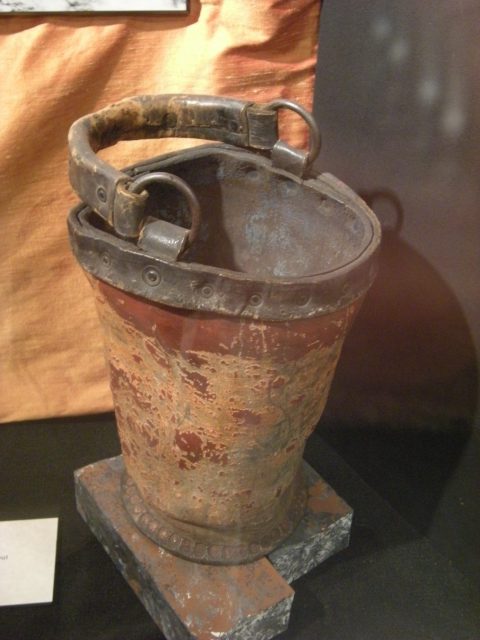 With warming pans and candles everywhere, the chances of an accidental fire would be high. Without a fire department or handy extinguishers, every house kept a fire bucket. These were often made of heavy leather.

As well as being used to put out small fires, these buckets could be used to tackle big fires. In the event that a fire got out of control, local residents would form a bucket chain and pass buckets of water along it to help extinguish the blaze. For this reason, fire buckets would be kept by the door.

There are other interesting bits of Colonial life that are still around today but not often used in the modern world. 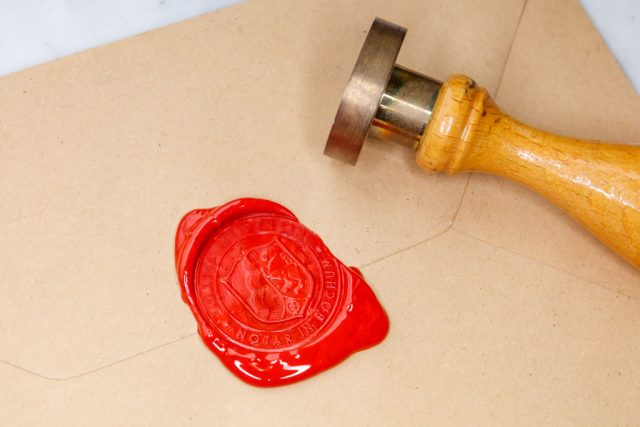 In this photo illustration, a seal out of sealing wax with a stamp on a document cover is seen (Photo Credit: Mario Hommes/DeFodi Images via Getty Images)

If you had an official document or package you wanted sealing, then you’d use a stamp. These were small pieces of metal that had an image or crest engraved into them in reverse.

Sealing wax would be heated up and poured onto the correct area. The stamp would then be pressed into the wax and kept there until the wax cooled and set. When the stamp was taken away, an impression of the crest or image would be left in the wax (the right way round).

More from us: 16 Everyday Items With Unexpectedly Strange Backstories 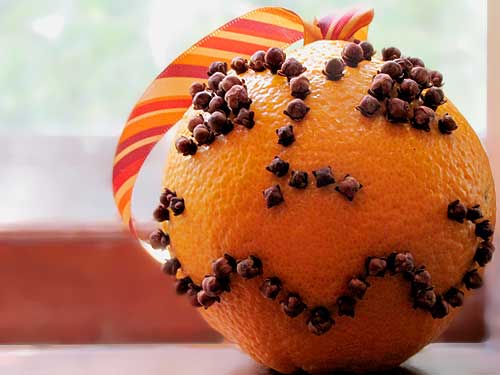 Pomanders were made by pushing cloves into oranges and apples, and they have been around in one form or another for many centuries.

They had many uses in Colonial America, ranging from window decorations to charms to ward off witchcraft. However, perhaps their most enduring use was simply as a way to fragrance a room (one that would stink thanks to the uncarded wool and the tallow candles). They could even be hung in closets to prevent clothes from smelling damp or stale.

« Awkward Vintage Photos of Classic Hollywood Stars Posing With Turkeys
Did The Movie Get It Right? What 12 Titanic Passengers Looked Like In Real Life »