Did The Movie Get It Right? What 12 Titanic Passengers Looked Like In Real Life

Many people thought that James Cameron’s Jack Dawson was a real person because a Titanic headstone in Halifax, Nova Scotia bears the name “J. Dawson.” Despite this controversy, Jack Dawson is a fictional character made up by Cameron for his movie. However, many characters in Titanic are based on real-life people. Here, we see what Titanic passengers looked like in real life when compared to their movie counterparts. 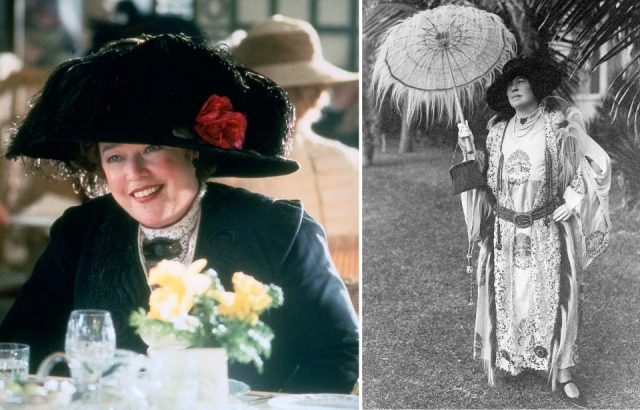 In the Titanic movie, actress Kathy Bates played Margaret Brown. Brown lent Jack Dawson (Leonardo DiCaprio) her son’s tuxedo for a first-class dinner in the movie. When the Titanic was sinking, Margaret Brown was in Lifeboat No. 6 with Rose’s mother, Ruth DeWitt Bukater, when she says that there is plenty of room in their lifeboat and that they should go back to look for survivors. Ultimately, Quartermaster Robert Hichens tells her that any survivors will flood their lifeboat.

The real Margaret Brown is now known to history as the “unsinkable Molly Brown” for her actions on the night of April 15, 1912. Like in the movie, Brown ended up in Lifeboat No. 6, and she encouraged the real Hichens to go back and search for survivors. And like in the film, her urges were met with opposition from Hitchens, who believed that the lifeboat would be pulled down due to suction or the people in the water swamping the boat. Once the Carpathia rescued her lifeboat, she helped console other passengers and distributed extra blankets and supplies to survivors. By the time the Carpathia reached New York harbor, Margaret had helped establish the Survivor’s Committee and had raised almost $10,000 for survivors of the Titanic disaster. 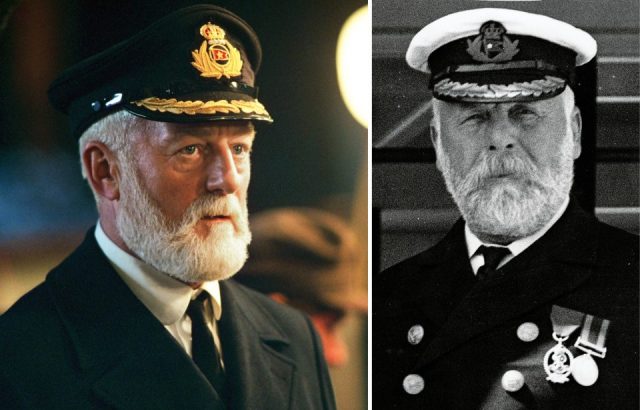 The Titanic was under the command of 62-year-old Edward Smith, who had 40 years of experience. During his entire career, Captain Smith had hardly ever been involved in an accident. In 1911, Smith took command of the (then) largest ship ever built, the RMS Olympic. However, on September 20, 1911, the Olympic collided with the British warship HMS Hawke while under Smith’s command. Both ships were severely damaged, but Smith was still put in command of the Titanic.

The maiden voyage on the Titanic was supposed to be Smith’s last before retirement. Despite Titanic radio operators receiving warnings about icebergs from other ships, Smith did not issue a decrease in speed. There are many conflicting reports about Smith’s final moments before the ship went down. Some newspapers reported that he shot himself with a pistol as the ship was going down, while other witnesses claimed to have seen Smith dive into the sea. Some people said that he was swept off by a wave, while others avowed he made it to an overturned lifeboat but lost his grip and fell back into the sea. Ultimately we may never know how Edward Smith met his end, as his body was never recovered. 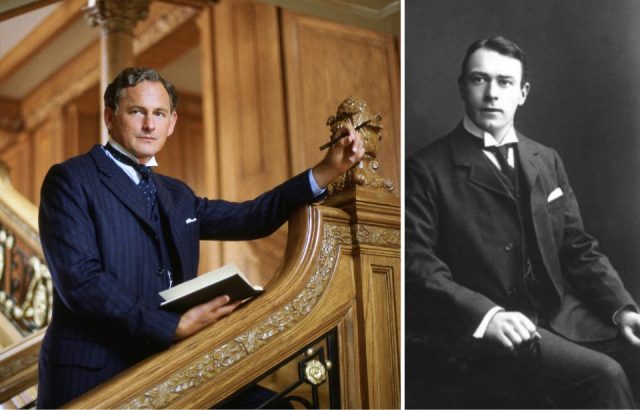 Actor Victor Garber played British shipbuilder Thomas Andrews in James Cameron’s Titanic. In the film, Andrews was a friend to Rose DeWitt Bukater, even going as far as telling her that the ship was doomed to sink after it hit the iceberg. In the movie, we see him giving his lifejacket to Rose in the first-class smoking room. The last time we see Andrews in the film is when he is looking at the clock in the first-class smoking room, with the time reading about 2:10 am.

The real Thomas Andrews was the chief designer of the Titanic. He had argued for more lifeboats to be on the ship as well as for better safety measures. If his proposal had been accepted, there would have been enough lifeboats on the ship for everyone. Like in the movie, Andrews was reportedly last seen in the first-class smoking room. However, other reports claimed he was on deck throwing chairs to those in the water. Thomas Andrews’s body was never recovered. 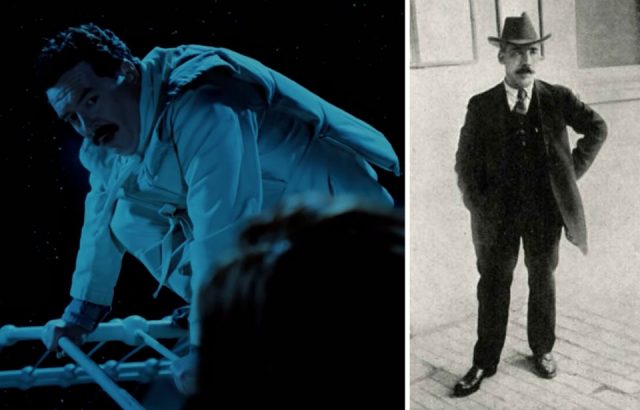 Charles Joughin wasn’t a central character in James Cameron’s Titanic, but his story is iconic nonetheless. When the ship was vertical, Joughin was on the other side of the railing with Rose and Jack. Rose and Charles made eye contact as the ship was being pulled into the water.

The real Charles Joughin was one of Titanic’s most unlikely survivors. He was the chief baker on the RMS Titanic. On the night of the sinking, Joughin was in his room drinking whiskey. When the evacuation order came, he arrived on deck and helped put women and children into lifeboats. He then returned to his room, drinking as much whiskey as possible, preparing for the worst. He then returned to the deck where he started throwing wooden chairs into the water, hoping to help the people already in the water.

Similar to the movie portrayal, Charles Joughin actually did hang onto the rails of the Titanic while it was vertically sticking up in the air. After the ship sank, Joughin treaded water for two hours until the HMS Carpathia saved him. Joughin survived because he was the last person to leave the Titanic, meaning he spent less time in the freezing cold water. However, the main reason he was able to survive for so long in the icy water was because of the alcohol he consumed prior to entering the water, which gave him a false sense of warmth.

John Jacob Astor was the wealthiest passenger aboard the Titanic. Initially, John Jacob Astor was skeptical of the necessity of getting into a lifeboat, saying, “we are safer here than in that little boat.” However, by 1:45am, he had changed his mind and helped his wife into Lifeboat 4. His wife was pregnant, and he asked if he might join her in the lifeboat, as she was in “a delicate condition.” Ultimately, he would perish in the disaster. His body was recovered on April 22, 1912. 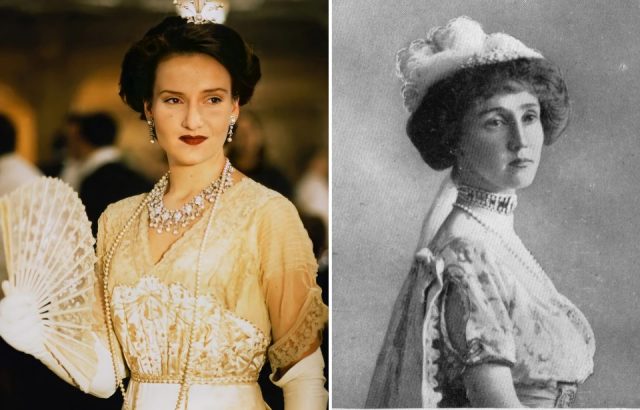 Lucy Noel Martha Dyer-Edwards, also known as the Countess of Rothes, had a minor role in James Cameron’s Titanic but was ultimately a heroine of the disaster. The Countess found herself in Lifeboat 8 and ended up helping to command the boat. She was handed the tiller, which enabled her to steer clear of the sinking liner. She also assisted in rowing her lifeboat to the Carpathia, all while comforting others and trying to keep the morale high. 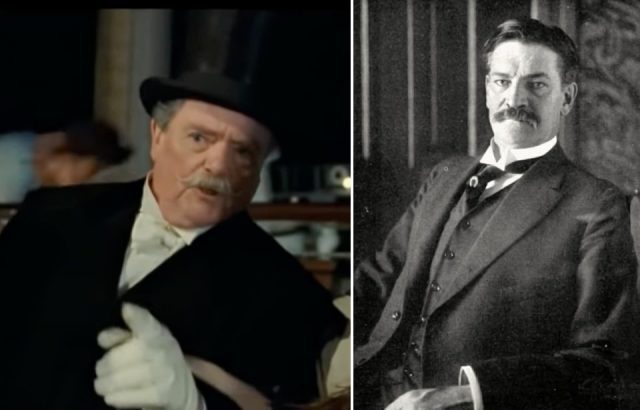 In the movie Titanic, we last see Colonel Archibald Gracie offering to escort Rose to find more lifeboats. In a deleted scene from the movie, we learn that Gracie survived the sinking of the Titanic, as he is seen on the RMS Carpathia.

Like in this deleted scene, the real Colonel Archibald Gracie IV would survive the sinking of the Titanic. After all the lifeboats were gone, Gracie made his way to the stern of the ship. When the ship went down, he was pulled under the water with it but managed to make it back to the surface of the ocean. He then swam to upturned Collapsible Lifeboat B and balanced on it in knee-deep water with around 30 other men. By the time the Carpathia arrived, Gracie was suffering from hypothermia. Unfortunately, Gracie’s health never recovered, and he passed away on December 4, 1912. 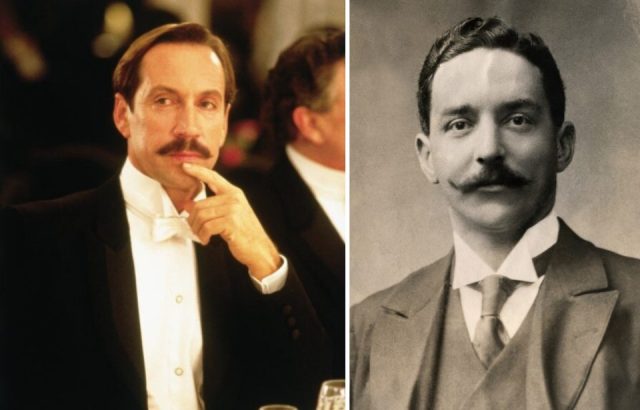 Arguably, J. Bruce Ismay was one of the villains in the Titanic movie. In the film, we see Ismay encourage Captain Smith to speed the ship up to arrive in New York ahead of schedule. During the sinking of the Titanic, Ismay jumped into Collapsible C, where First Officer William Murdoch noticed him do so but didn’t comment. He is portrayed as a coward for abandoning the ship while so many others perished around him.

In reality, Joseph Bruce Ismay did survive the sinking of the Titanic and was branded a coward for the rest of his life. Ismay was the chairman and managing director for the White Star Line, and it was normal for him to accompany his ships during their maiden voyages. It was Ismay who reduced the number of lifeboats on the Titanic from 48 to 16 (plus the smaller collapsible boats that would eventually save him). During the sinking of the Titanic, he did have a spot in Collapsible Lifeboat C, but there are accounts of him helping hundreds of women and children into lifeboats before he saved himself. The media plagued Ismay as a coward for the rest of his life, but he did help pay out thousands of pounds to victims and the relatives of victims. 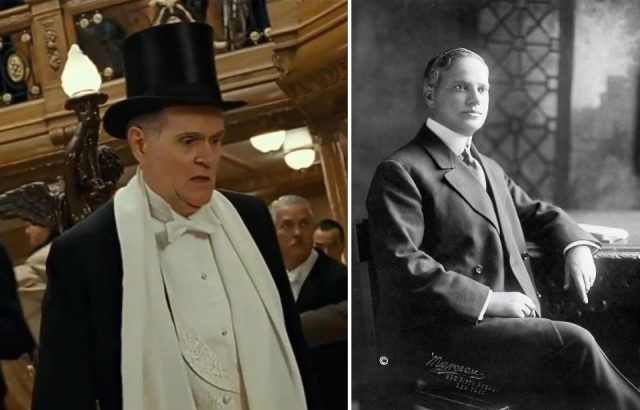 The last time we see Benjamin Guggenheim in the Titanic movie is while the Grand Staircase is flooding. He’s sitting in a chair, drinking a glass of brandy. Accounts of the real Guggenheim’s final moments are similar to those portrayed in the movie. After the Titanic hit the iceberg, Guggenheim changed into his finest evening wear, as did his valet Mr. Giglio. He was later heard saying, “we’ve dressed in our best and are prepared to go down like gentlemen.” This line is repeated by Michael Ensign, who played Benjamin Â Guggenheim in the Titanic movie. Although Benjamin Guggenheim died inside the ship at the Grand Staircase in the movie, he was actually last seen on Titanic’s deck watching lifeboats being lowered. 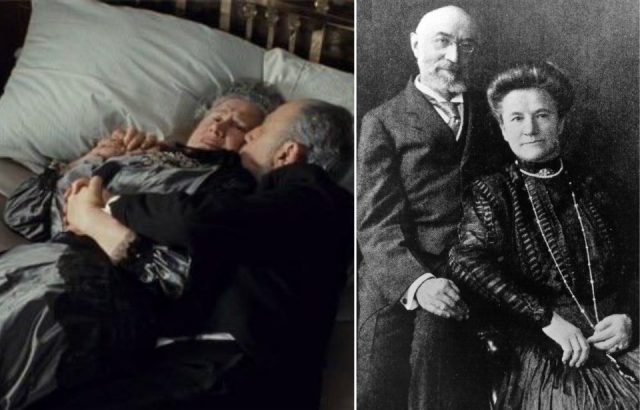 In James Cameron’s Titanic, one of the most tragic scenes depicts an elderly couple in bed while water rushes underneath them. This couple is based on the real-life husband and wife named Ida and Isidor Straus.

Isidor Straus was the co-owner of the Macy’s department store. The couple were first-class passengers on the Titanic. While women and children were being put into lifeboats, Ida had an opportunity to save herself. Initially, she accepted a sport in a lifeboat, thinking that her husband would follow her. Although the officer offered Isidor a spot on the lifeboat, he stated he would not enter a lifeboat “until I see that every woman and child on board this ship is in a lifeboat.” Ida ultimately gave up her spot on the lifeboat, telling Isidor, “where you go, I go.” Isidor’s body was later recovered, but Ida’s was never found. 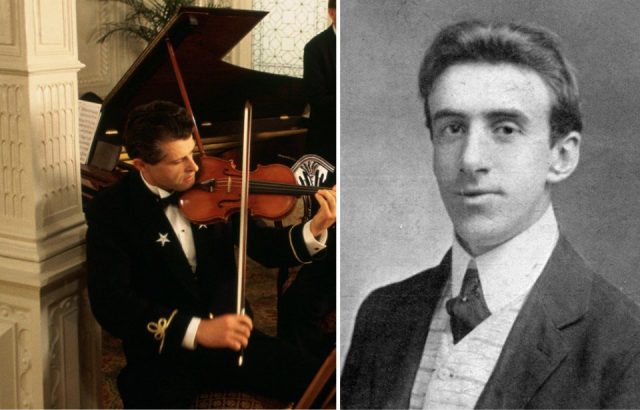 After the Titanic hit the iceberg, Hartley and his fellow musicians began playing music to help keep passengers calm while lifeboats were being loaded. Although it is not completely known what the final song Hartley played was, it is widely accepted that “Nearer My God To Thee” was the song, as depicted in James Cameron’s movie.

On May 4, 1912, Hartley’s body was recovered. Supposedly, Hartley’s body still had his violin case strapped to his back. In 2006, Hartley’s violin that he played on the Titanic was found and later was sold at auction for more than $1.7 million. 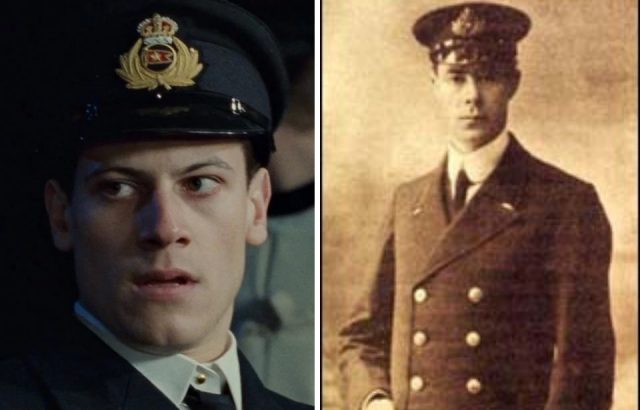 In the movie, Fifth Officer Harold Lowe is the only officer that went back to save survivors from the shipwreck. He is the officer who saved Rose from the freezing waters in the final scenes of the movie. The real Fifth Officer Harold Lowe was only 29 when the Titanic sank, and as in the movie, he was the only Titanic officer to go back and rescue people. In total, Lowe rescued four men from the water, but only three survived. 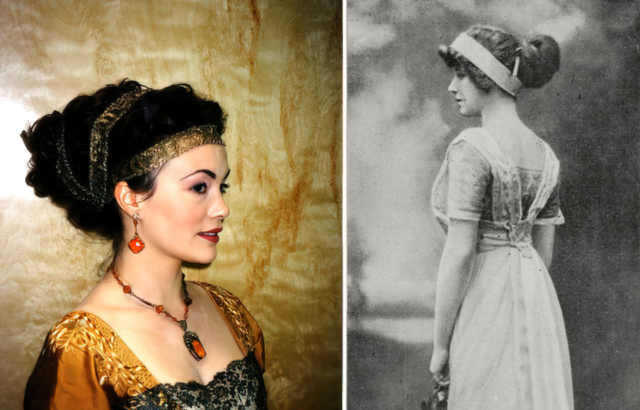 As previously mentioned, John Jacob Astor IV’s second wife Madeleine Force was also on board. The American socialite was played by actress Charlotte Chatton. Just as depicted in the movie, she was pregnant at the time of their voyage. In fact, she and John Jacob Astor were traveling back to America so the baby would be born there. Madeleine survived the sinking and gave birth to their son, John Jacob “Jakey” Astor VI, four months later. He became known as “The Titanic Baby.”

« 17 Colonial-Era Items That Most Modern Americans Would Have No Idea How To Use
Did You Know That Clint Eastwood Wasn’t The Original Choice For Dirty Harry? »