These Photos Show Audrey Hepburn’s Life On and Off Stage

Audrey Hepburn was born Audrey Kathleen Ruston on May 4, 1929. Widely considered one of Hollywood’s most famous actresses, she was a film staple during the 1950s and ’60s, and led a fascinating life. Here are some images that offer a glimpse at her time both on and off stage.

In the lead-up to the Second World War, Audrey Hepburn’s mother and father were members of the British Union of Fascists. They toured Germany, and after the two divorced, Ella attended the Nuremberg rallies and wrote enthusiastic accounts of the experience. Joseph was imprisoned throughout the duration of the conflict for receiving seed money to start a newspaper tied to Joseph Goebbels, Germany’s propaganda minister. 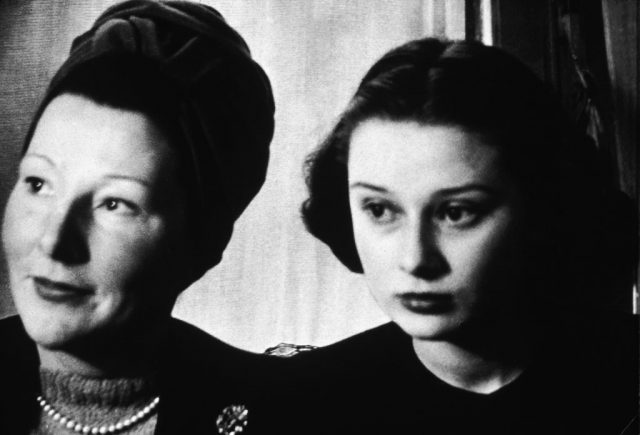 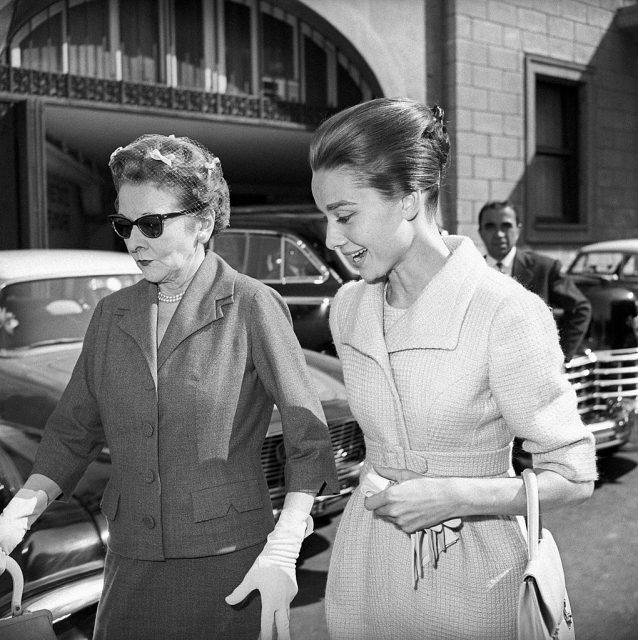 During WWII, Audrey Hepburn and her mother relocated to the Netherlands, as it was Ella’s belief they’d be safer in a nation that had pledged neutrality during the conflict. However, the Germans soon occupied the country, leading to a time of great hardship for Hepburn and the rest of those living in Holland. 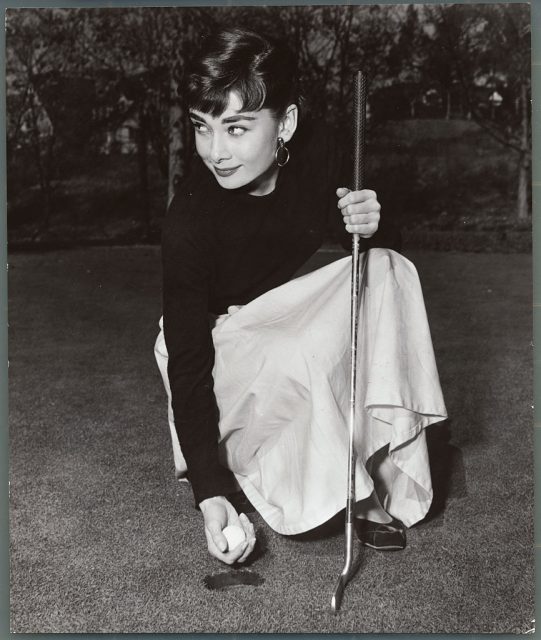 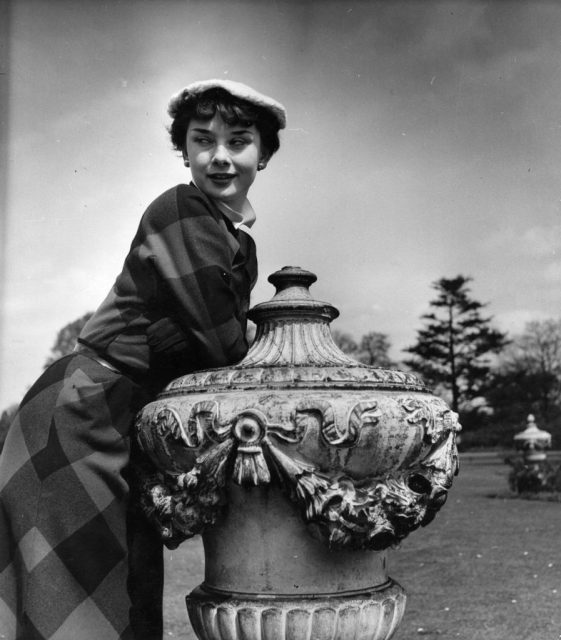 As to not arouse suspicion, Hepburn went by Edda van Heemstra Hepburn-Ruston. She spent much of her time aiding in the Dutch resistance, largely acting as a courier, moving messages and money between resistance members. This was because children were less likely to be searched by German soldiers. 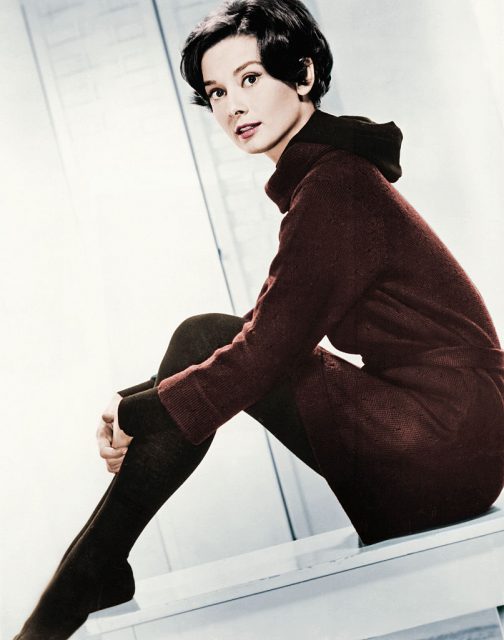 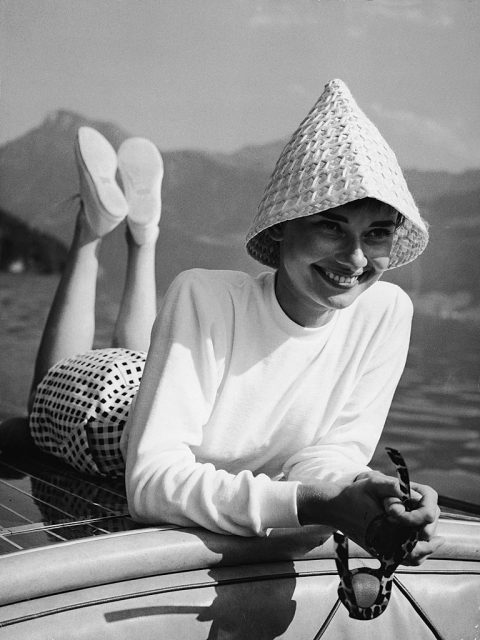 She also volunteered at a hospital at the center of resistance activities in Velp, and it’s reported her family hid a paratrooper during the Battle of Arnhem. During a screen test for Roman Holiday, she recalled performing ballet for audiences too afraid to clap, out of fear the Germans would catch them. 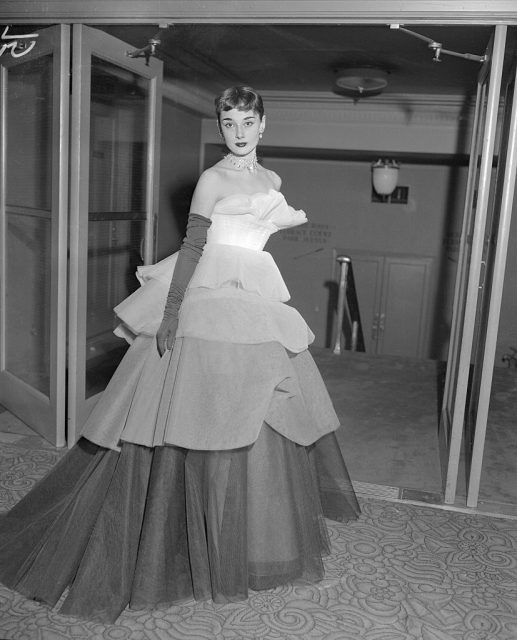 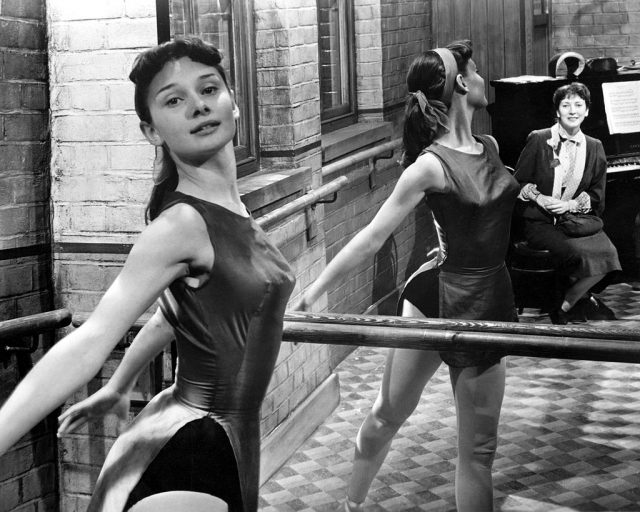 Hepburn and her mother were not immune from the suffering that came with the Dutch Famine. During the winter of 1944-45, millions nearly starved after the Germans cut off food supplies. As such, her figure was the result of being malnourished while a teenager, during which she also developed acute respiratory problems, anemia, and edema.

Following WWII, Audrey Hepburn continued to pursue her interest in dance, studying ballet in Amsterdam and later, London. It was there that she was noticed by a producer, who asked her to appear in the European movie, Dutch in Seven Lessons. More small roles followed, in 1949’s Sauce Tartar and Sauce Piquante in 1950. 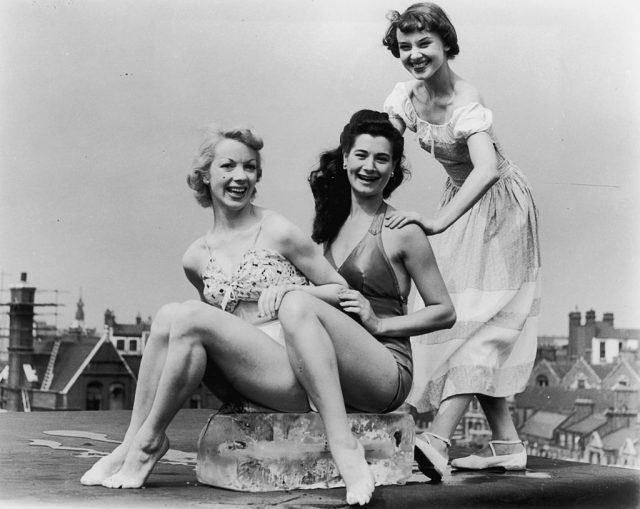 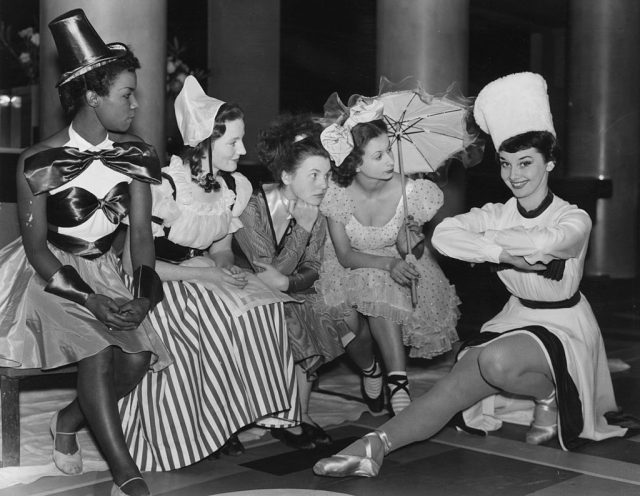 Hepburn made her feature film debut in 1951’s One Wild Oat. While uncredited, it led to other roles, and she eventually landed on Broadway for the production of Gigi. A few weeks later, tabloids reported she was being pursued by Hollywood executives. 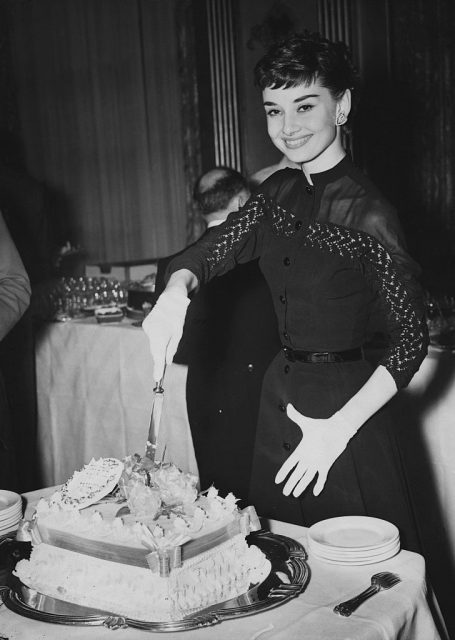 Hepburn cuting a cake at a reception in her honor at London’s Claridges Hotel, 1953. (Photo Credit: Hulton Deutsch / Getty Images) 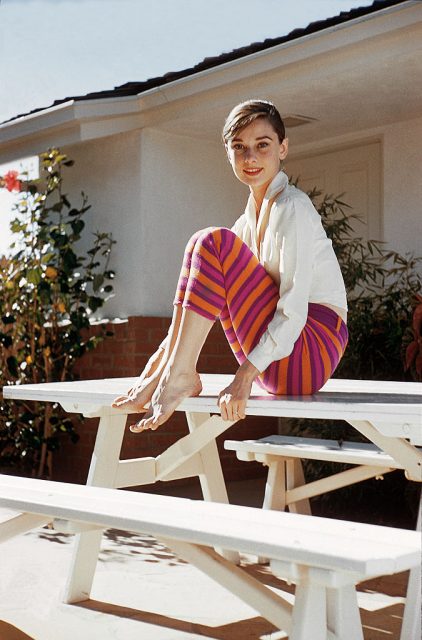 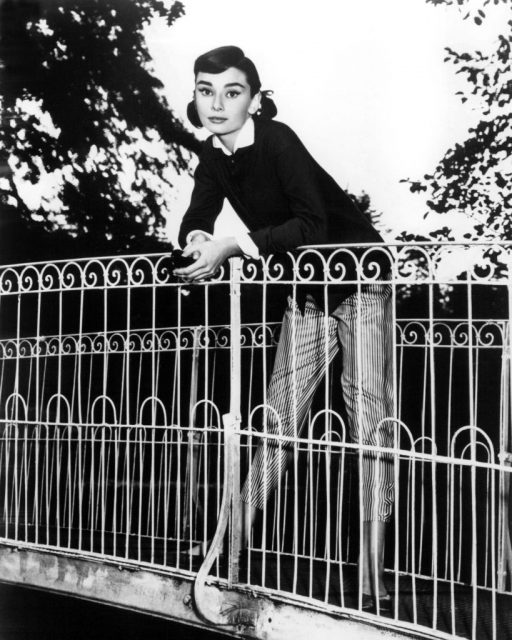 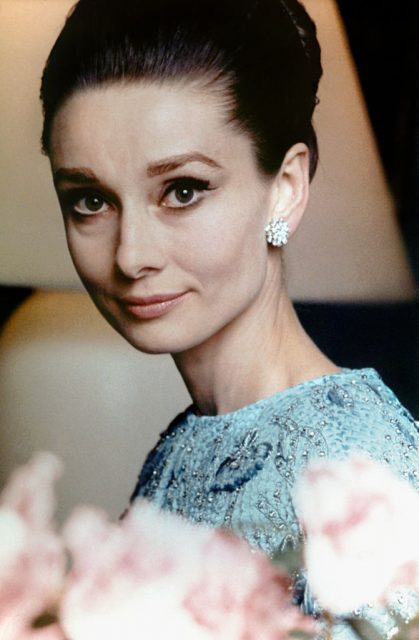 The success of Hepburn’s early films led to other roles, including appearances in 1954’s Sabrina, for which she was nominated for her second Academy Award; the film adaption of Leo Tolstoy‘s War and Peace; 1957’s Funny Face, alongside Fred Astaire; and as Sister Luke in The Nun’s Story, which earned her yet another Oscar nod. 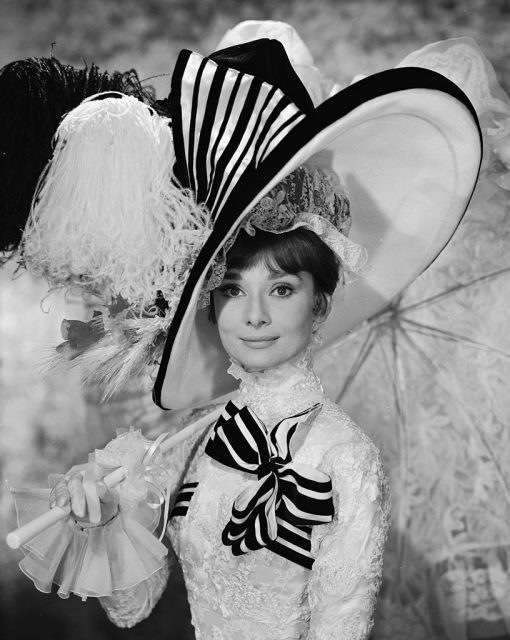 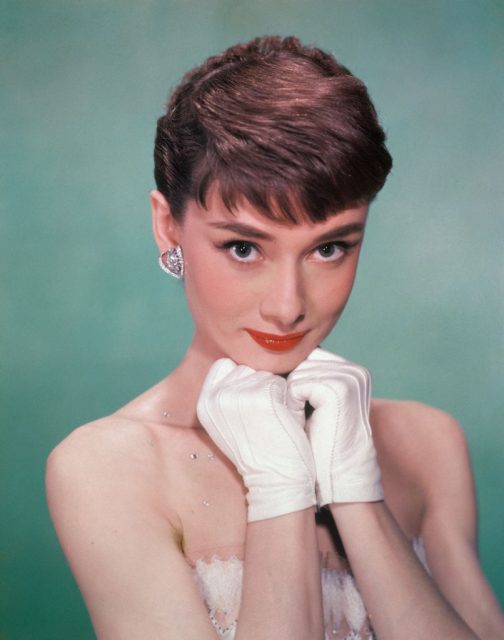 Her most popular role remains Holly Golightly in 1961’s Breakfast at Tiffany’s. In the film, she played a lighthearted, yet troubled party girl living in New York City who gets involved with a struggling writer, played by George Peppard. Not only did it cement her as a Hollywood legend, it secured her a fourth Academy Award nomination. 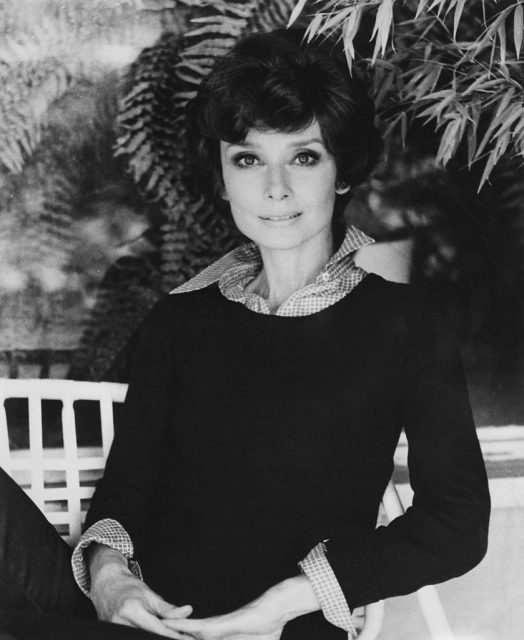 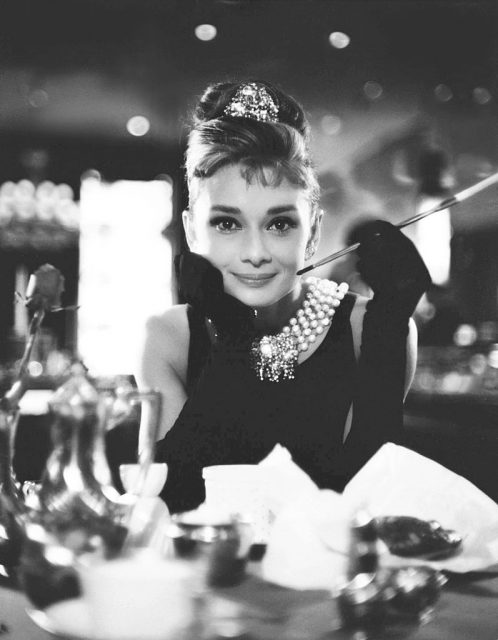 Following 1967’s Wait Until Dark, Hepburn largely retired from acting. While she worked sporadically during the 1970s and ’80s, she chose to focus on other interests. Her last role was in Steven Spielberg‘s Always. She starred in 31 movies throughout her career, and was one of the few stars to win an EGOT – an Emmy, a Tony, a Grammy, and an Academy Award.

Despite the majority of her films being released during the mid-1900s, Audrey Hepburn remains one of Hollywood’s greatest style icons. It all began with Roman Holiday, in which she was seen as an “alternative feminine ideal” that contrasted the curvy and more sexual appearance of the likes of Grace Kelly, Marilyn Monroe, and Elizabeth Taylor. Her cropped hairstyle, thick eyebrows, and slim figure were also much more attainable and easier to emulate. 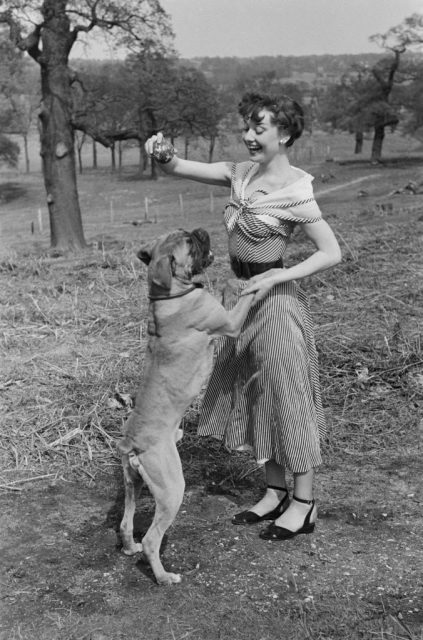 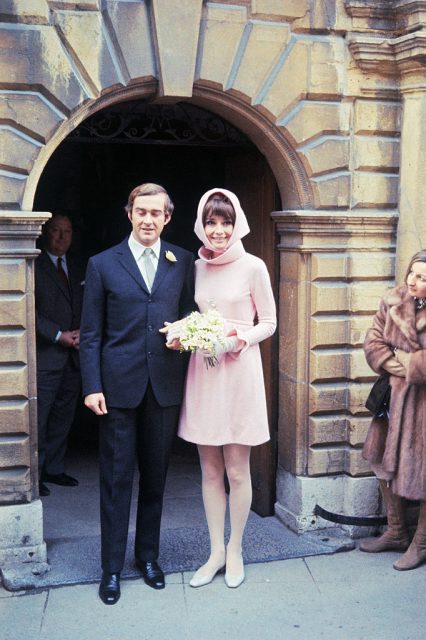 Hepburn and Andrea Dotti following their wedding ceremony in 1969. The had a son together, Luca, and divorced in 1982. (Photo Credit: Bettmann / Getty Images)

It’s widely known Hepburn was Givenchy‘s muse. He designed many of the outfits she wore in her movies, and in 1957 made her the face of his first perfume, L’Interdit. He dressed her in classy and elegant outfits, leading to the popularization of the little black dress and monochromatic colors. 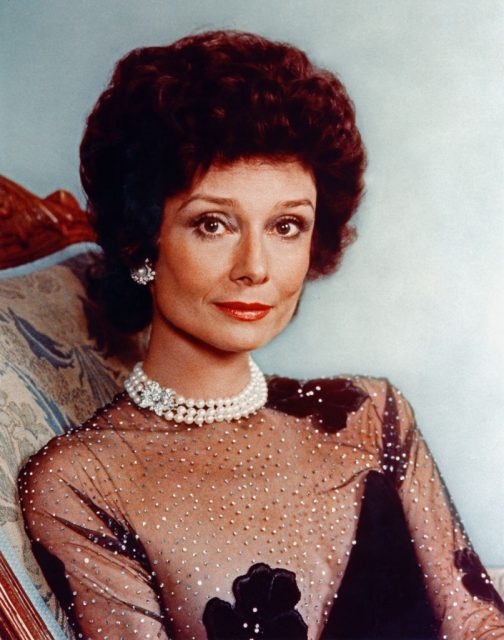 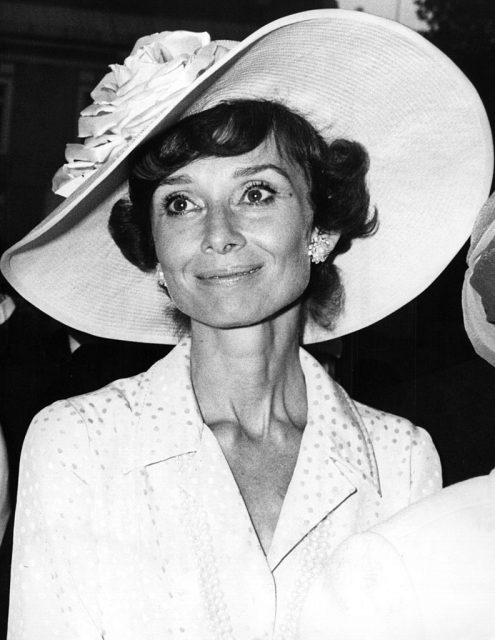 Despite being considered one of the most beautiful actresses in Hollywood – she was named one of PEOPLE magazine’s 50 most beautiful people in the world – Hepburn never considered herself as such. Her private style also contrasted that of her public image, as she preferred to wear black leggings and more comfortable, casual outfits.

Focus on her humanitarianism

In the 1950s, Audrey Hepburn narrated two radio programs for UNICEF, re-telling stories of war from children. This, along with her own experiences during WWII, spurred her to shift her life’s focus. After retiring from acting, she dedicated her time to UNICEF, becoming a goodwill ambassador in the late 1980s. 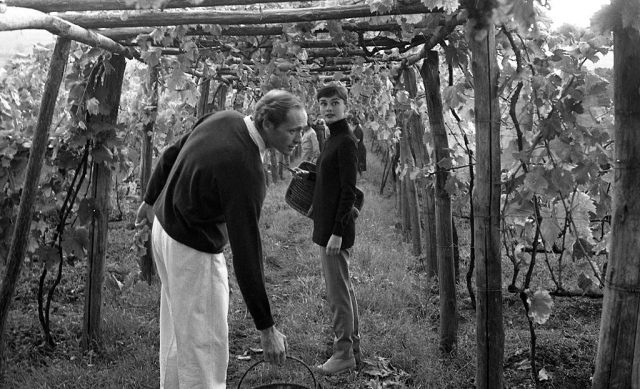 Hepburn and her first husband, Mel Ferrer, at an Italian vineyard. The pair web in 1954, and their marriage produced one son, Sean. They divorced in 1967. (Photo Credit: Dwayne DeJoy / Getty Images) 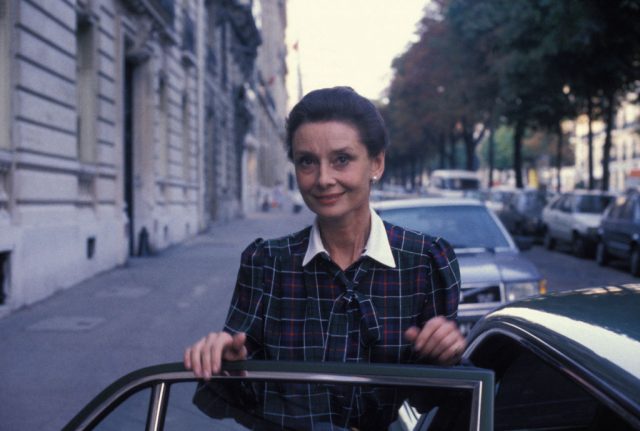 Hepburn traveled the world, trying to raise awareness about children in need. She made over 50 trips, visiting Central and South America, Asia. and Africa, among other locations. She was an eloquent speaker, participating in the World Summit for Children, giving numerous public interviews about UNICEF’s work, and testifying before US Congress. 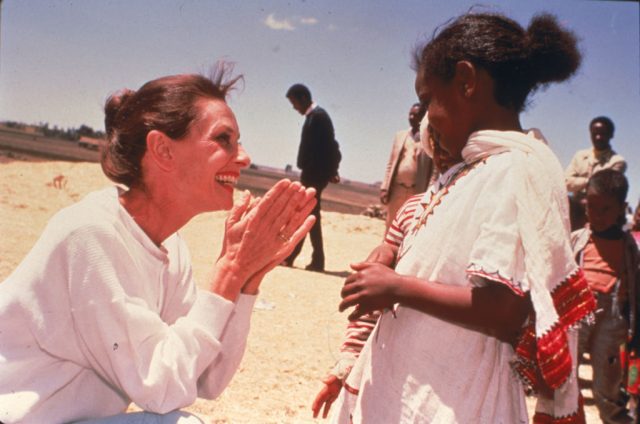 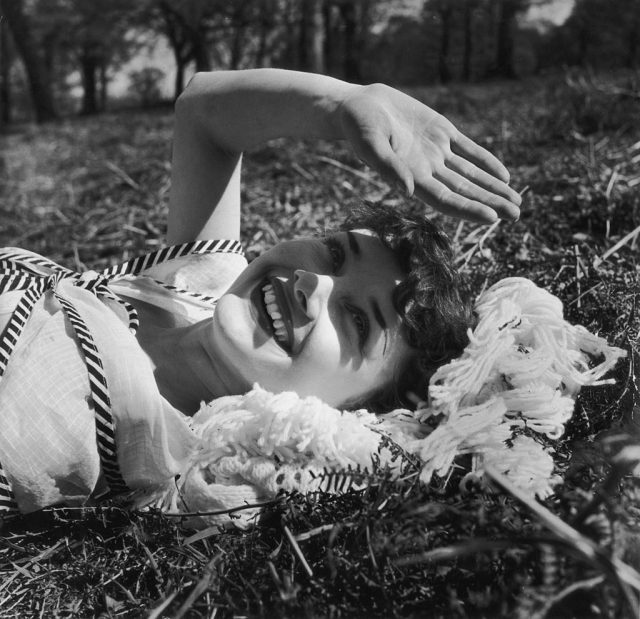 In 1992, President George H.W. Bush presented her with the Presidential Medal of Freedom, and a year later, she was posthumously awarded an Academy Award for her work. Before the award ceremony could take place, she died of colon cancer. 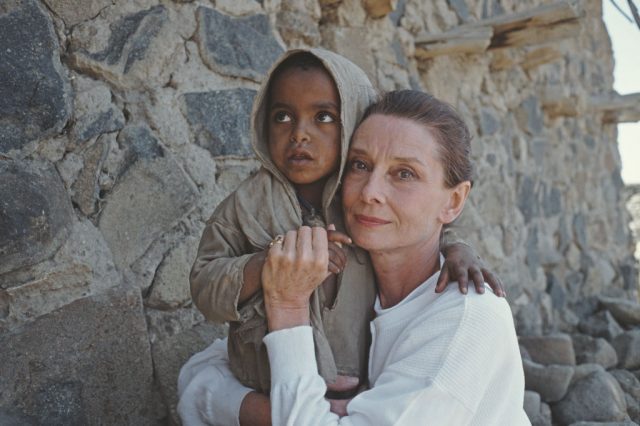 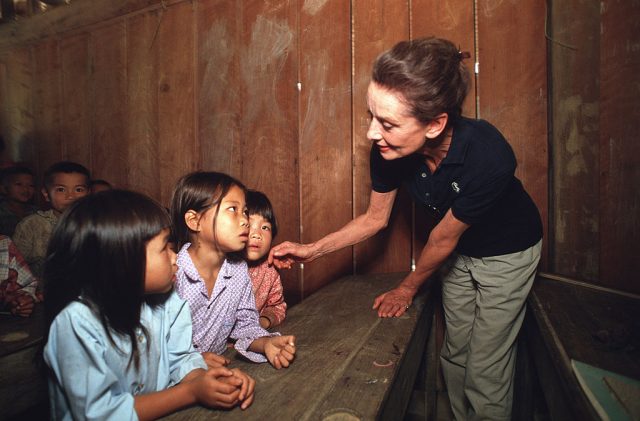 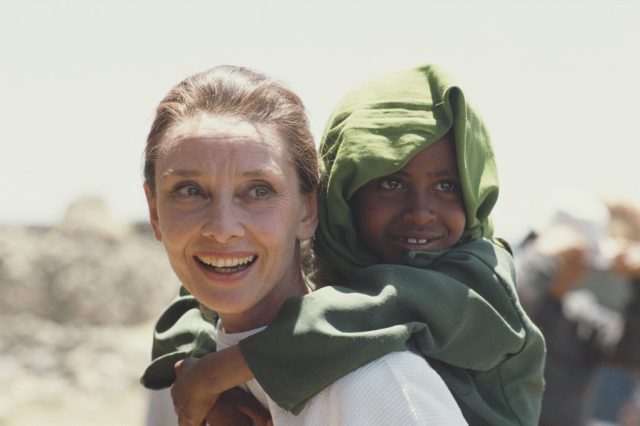 More from us: Photos Of The Greatest American Actress, Elizabeth Taylor

In 2002, at the United Nations Special Session on Children, UNICEF honored Hepburn’s legacy by unveiling a statue, called “The Spirit of Audrey,” at its headquarters in New York. Her efforts were also recognized through the United States Fund for UNICEF’s Audrey Hepburn Society.