A discovery made by Israeli archeologists truly sounds like it could be the plotline for the next Pirates of the Caribbean movie. Late in 2021, archeologists discovered the remains of two sunken ships filled with a trove of Roman treasures off the Mediterranean coast. 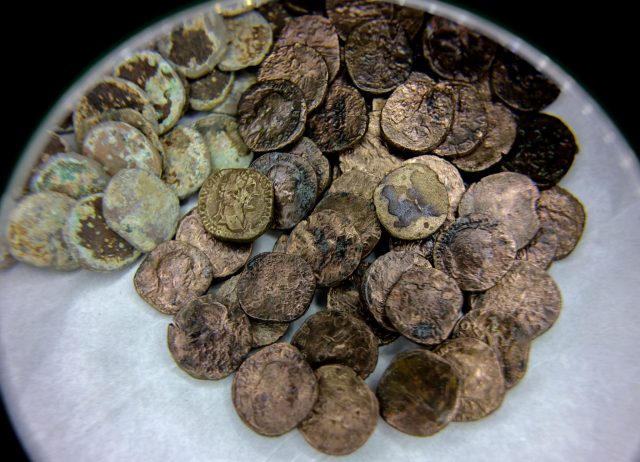 Coins from the Mamluk period that were recovered off the coast of Caesarea. (Photo Credit: AHMAD GHARABLI / Getty Images)

The ships’ cargoes and their remains were found during an underwater survey conducted by the Marine Archeology Unit of the Israeli Antiquities Authority. Over the past two months, hundreds of Roman silver and bronze coins were discovered, dating back to the third century. More than 500 silver coins from the Middle Ages have also been found scattered around.

The ships and coins were discovered in shallow water, at a depth of about four meters. The finds were made near the ancient city of Caesarea, and can be dated to the Roman and Mamluk periods- around 1,700 and 600 years ago, respectively. 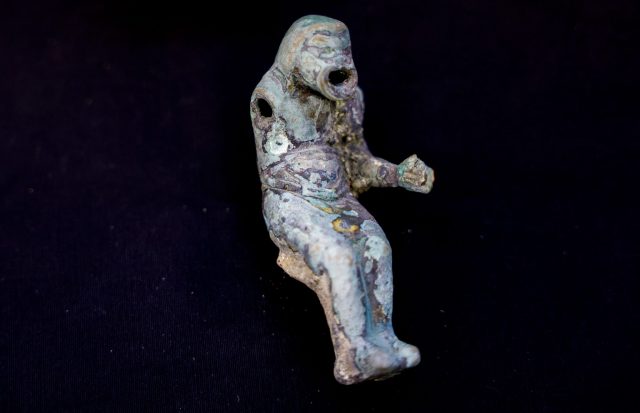 An ancient figurine of a Roman pantomimus recovered off the coast of Caesarea. (Photo Credit: AHMAD GHARABLI / Getty Images)

A number of ancient items were also discovered along with the coins. A bronze eagle symbolizing Roman rule was found in the sediment, along with a figurine of a Roman pantomimus in a comic mask, pottery vessels, and a number of bronze bells that were thought to help ward off evil spirits.

Metal items from the hull of a wooden ship were also uncovered. These finds include numerous large bronze nails, lead pipes from a bilge pump, and a large iron anchor that’s been broken into many pieces. 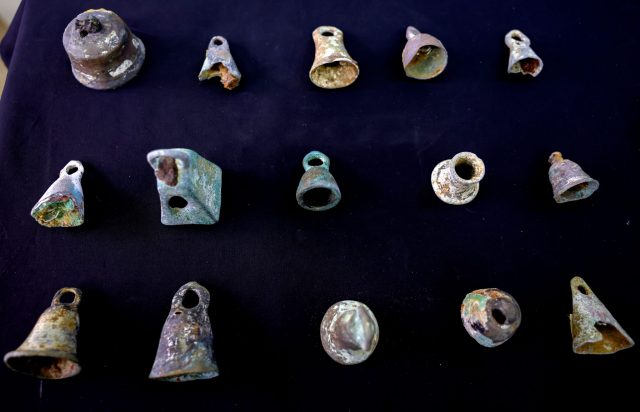 Jacob Sharvit and Drop Planer of the Israel Antiquities Authority Marine Archeology Unit explain that the ships were probably ruined in bad weather: “The ships were probably anchored nearby and were wrecked by a storm. They may have been anchored offshore after getting into difficulty, or fearing stormy weather, because sailors know well that mooring in shallow, open water outside of a port is dangerous and prone to disaster.” The fact that the large anchor is broken attests to the forces it withstood until it inevitably snapped in this storm. 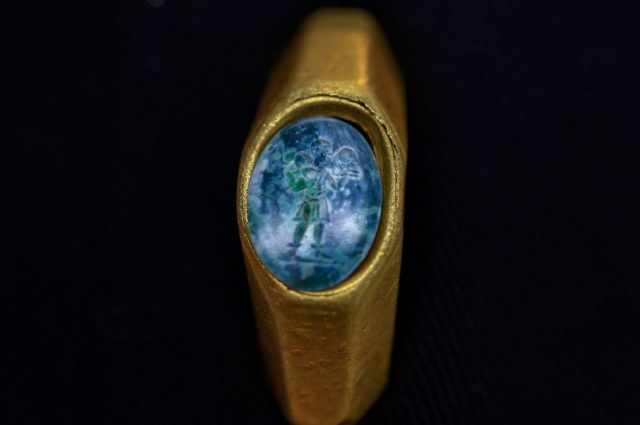 Jacob Sharvit believes the Roman ship originally came from Italy, based on the artifacts. However, it is unclear whether any sort of remnants of the original wooden ship could still be intact beneath the sand.

More from us: Sword Dating Back to the Crusades Discovered At the Bottom of the Mediterranean Sea

One of the most surprising treasures found beneath the surface is a Roman gold ring with a green gemstone carved with a figure of a shepherd carrying a sheep on his shoulders. Robert Cole, the head of the authority’s coin department, called this ring “exceptional.” He went on to explain that “on the gemstone is engraved an image of the ‘Good Shepherd,’ which is really one of the earliest symbols of Christianity.

« A Dinosaur Embryo Has Been Found Inside a Fossilized Egg. Here’s What It Means
8 Actors Who Turned Down the Chance to Play James Bond »