A Dinosaur Embryo Has Been Found Inside a Fossilized Egg. Here’s What It Means

Perhaps a real-life Jurassic Park is not that far off. A well-preserved dinosaur embryo was uncovered in Ganzhou, located in southern China. This 66- to 72-million-year-old dinosaur embryo has been described as “one of the best-preserved specimens of its kind ever found.” 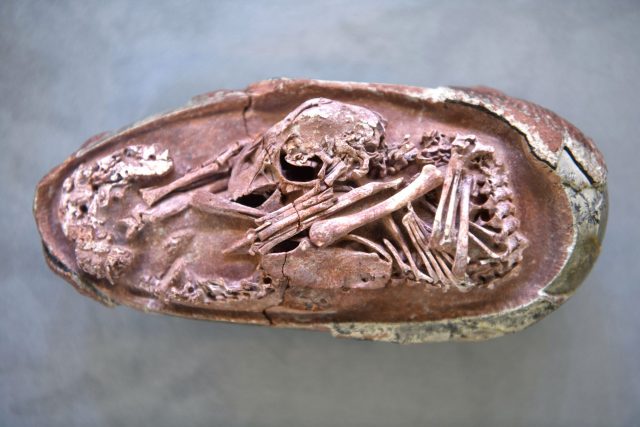 The embryo is believed to belong to a toothless theropod dinosaur or oviraptorosaur. The embryo has affectionately been nicknamed Baby Yingliang. Researchers believe that the egg was ready to hatch when a sudden mudslide covered it. This mudslide preserved the egg as it protected it from scavengers.

Researchers initially acquired the egg in 2000, but it was put into storage for 10 years. Scientists at Yingliang Group, a company that mines stones, suspected that the egg contained some sort of fossils when it was put into storage. When construction began on the Yingliang Stone Natural History Museum, the fossilized egg was rediscovered as boxes of unearthed fossils were sorted through. 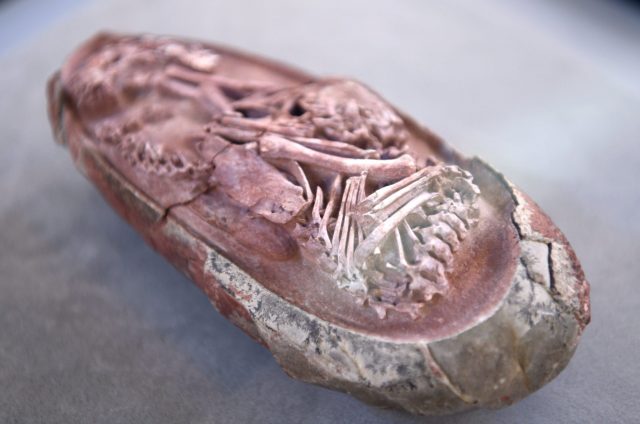 In a news release, Lida Xing of China University of Geosciences, Beijing, said that “museum staff identified them as dinosaur eggs and saw some bones on the broken cross-section of one of the eggs.” It was in this egg that Baby Yingliang’s embryo was found.

This discovery has provided researchers with a better understanding of the link between dinosaurs and modern birds. Theropod means “beast foot,” but the feet of theropod dinosaurs typically resemble the feet of birds. The embryo also was in a curled position known as “tucking.” Baby Yingliang’s head lay below its body, with its feet tucked on either side and back curled. This sort of position is also seen in birds shortly before they hatch. Baby birds tuck their heads under their right wings to stabilize themselves while cracking through the shells with their beaks. 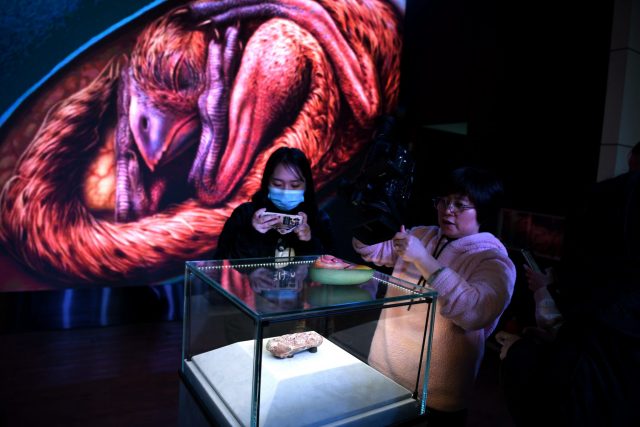 People looking at the preserved Oviraptorosaur dinosaur embryo. The illustration in the background depicts the position the embryo is in. (Photo Credit: China News Service/ Getty Images)

Baby Yingliang’s posture previously had not been seen in dinosaurs. According to Fion Waisum Ma, a University of Birmingham researcher, the embryo’s tucking position “indicates that such behavior in modern birds first evolved and originated among their dinosaur ancestors.”

Oviraptorosaur means “egg thief lizards.” Oviraptorosaurs were a species of feathered dinosaurs that lived in Asia and North America during the Late Cretaceous period. The species ranged in size, anywhere from that of modern turkeys to massive Gigantoraptors that were eight meters, or 26 feet, long. 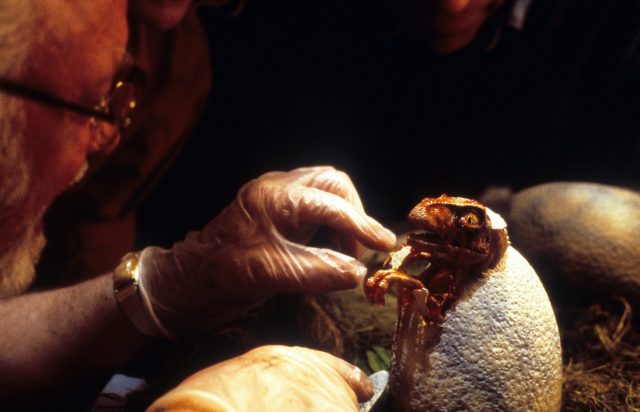 Researchers believe that had Baby Yingliang lived to be an adult, it would have grown to about two or three meters long.

Although fossilized dinosaur eggs have been found over the last century, discovering a well-persevered embryo is extremely rare. Professor Steve Brusatte of the University of Edinburgh, part of the research team working on Baby Yingliang, said that “the dinosaur embryo is one of the most beautiful fossils I have ever seen.”

More from us: A Need For Speed: Researchers Have Recently Discovered That Usain Bolt Can Run Just As Fast As These Dinosaurs

Part of the dinosaur’s body is still covered by rock. Researchers plan to use advanced scanning techniques to image its full skeleton to study Baby Yingliang in greater detail.