The murder of the Romanov family continues to fascinate the public even today. To many, it is unfathomable that an entire family was killed in cold blood. Although we can’t travel back in time and change anything about this history, the Romanovs’ final days were documented in pictures. Here we take a look at the intimate—and often haunting—photos of the Romanov family’s final days.

Life before abdication and exile 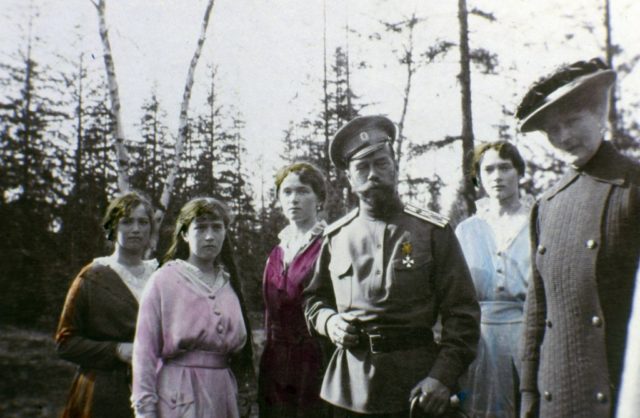 The House of Romanov was the reigning imperial house of Russia from 1613 to 1917. Tsar Nicholas II was the last Romanov ruler of Russia. He ruled from 1894 to his forced abdication in March 1917. 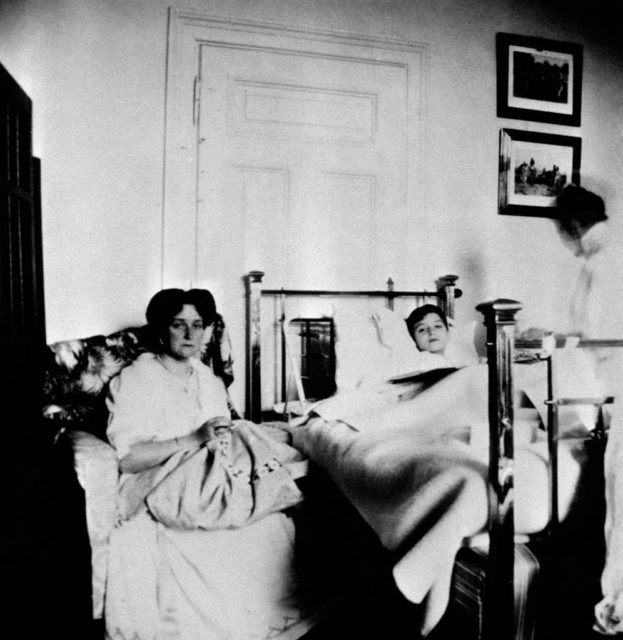 The Tsarina Alexandra at the bedside of her son Tsarevich Alexei Nikolaevich circa 1914, Russia. (Photo Credit: Keystone-France/ Getty Images)

In 1894, Tsar Nicholas II married Princess Alix of Hesse, who took the name Alexandra Feodorovna. Together, Nicholas and Alexandra had five children. Their four daughters were named Olga, Tatiana, Maria, and Anastasia, and their son was named Alexei. 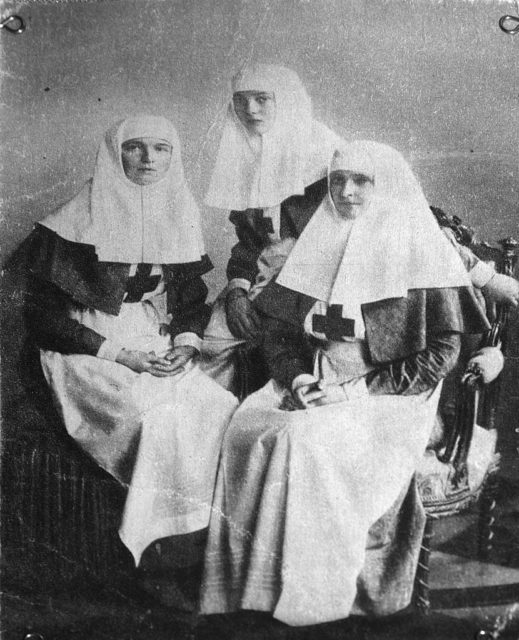 Alexei was Nicholas and Alexandra’s only son and thus the heir to the Romanov throne. However, Alexei suffered from hemophilia – an illness in which one’s blood does not clot normally, which causes excessive bleeding after any sort of injury. As such, he was often very ill and was required to stay in bed. 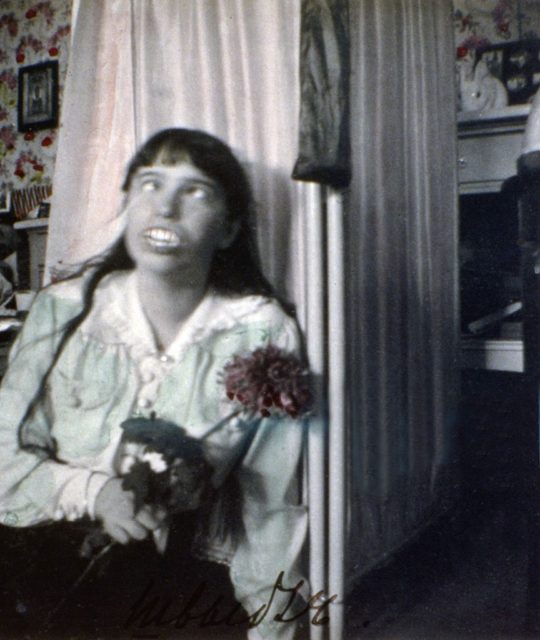 Because of Alexei’s illness, Alexandra sought out the guidance of the Russian mystic Grigori Rasputin. She thought this man could help cure Alexei’s hemophilia, and the Romanov line would continue. However, Rasputin’s influence over the royal family angered many other powerful leaders in Russia, who had him murdered on December 16, 1916. 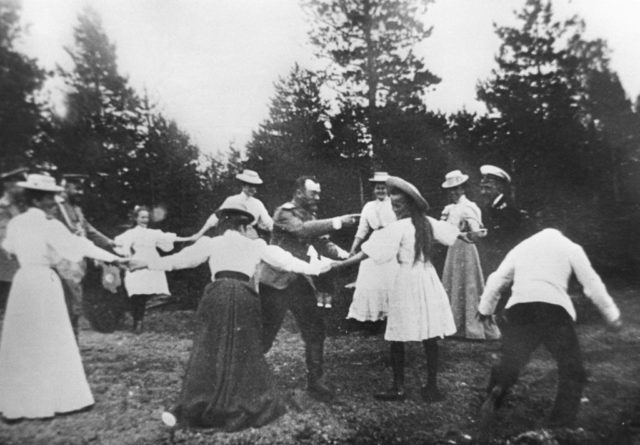 Tsar Nicholas was never an effective ruler. When he became Tsar, he had little experience with politics or ruling. In fact, Nicholas’s younger sister Olga Alexandrovna once said that “Nicky” was “wholly unfit to reign. He had been trained as a soldier when he should have been taught statesmanship.” 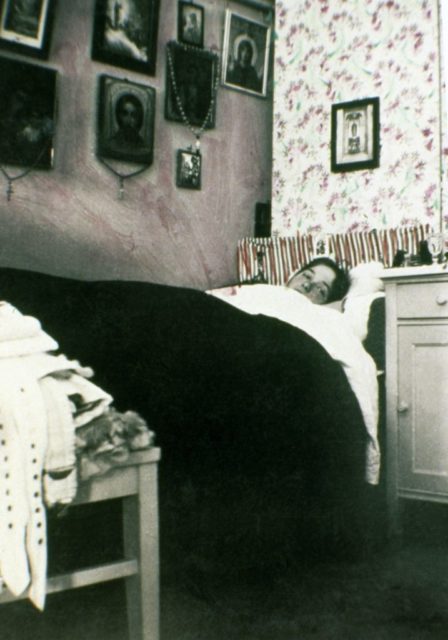 Though Tsar Nicholas II might have been trained as a soldier, he was entirely unequipped for the Russo-Japanese War from 1904 to 1905 and the First World War, starting in 1914. 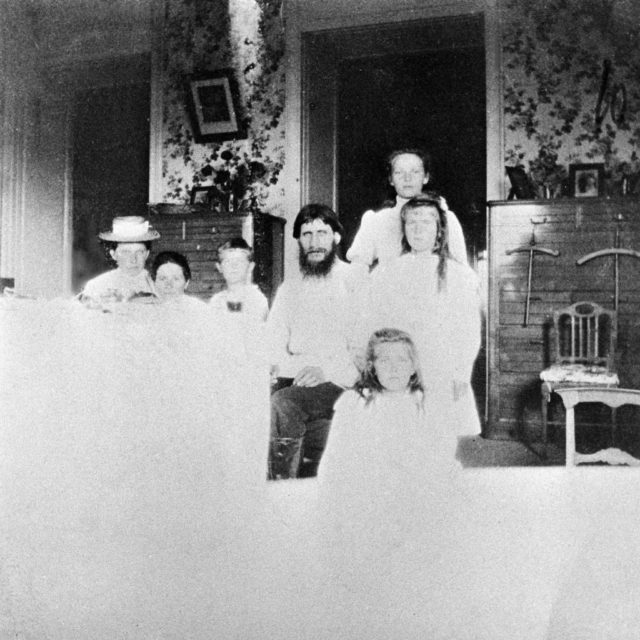 Russian armies were performing so poorly during the start of the First World War that by 1915, Tsar Nicholas II had appointed himself commander-in-chief so he could take direct control of the military. However, by 1917, it was clear that the majority of Russian citizens had lost faith in both the Tsar and the Imperial Romanov Family. 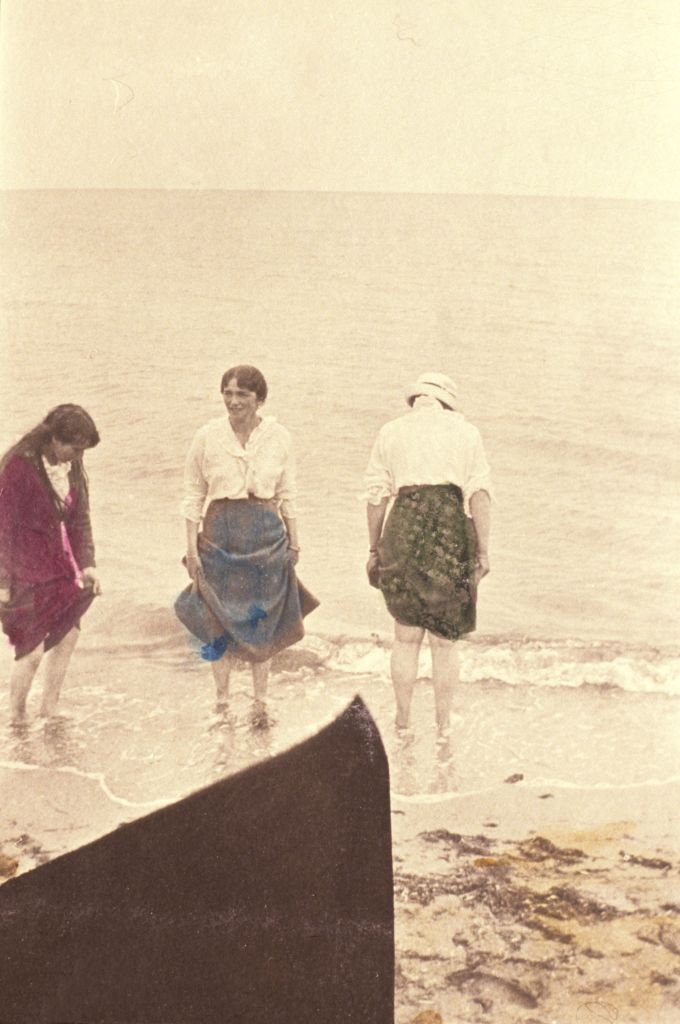 Damage to their official residence 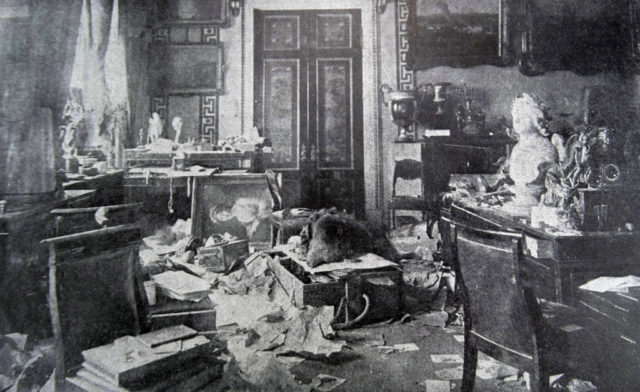 By early 1917, the Russian people had grown to distrust Tsar Nicholas II. During the February Revolution of 1917, the monarchy was overthrown and replaced by a Provisional Government led by Prince Georgy Lvov. 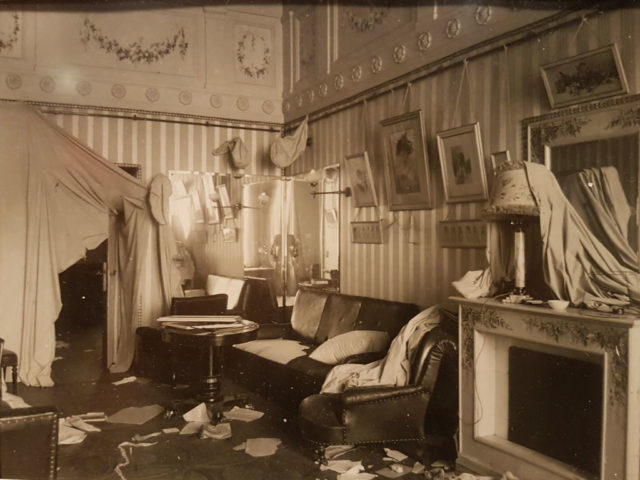 After his abdication, Nicholas and his family were first held under house arrest at Alexander Palace, located near the town of Tsarskoye Selo in Russia. Here, the family was confined only to a few rooms and they were monitored by guards with fixed bayonets. 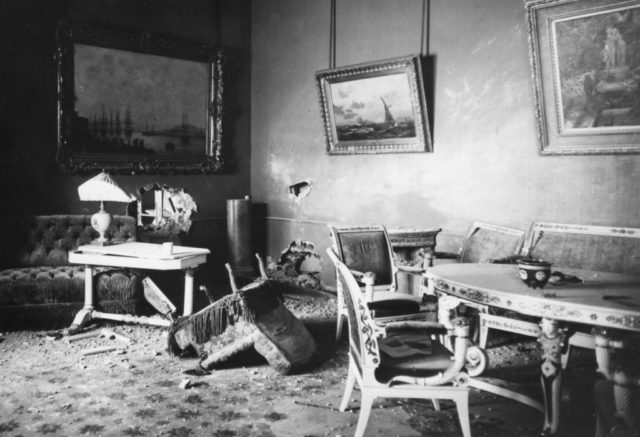 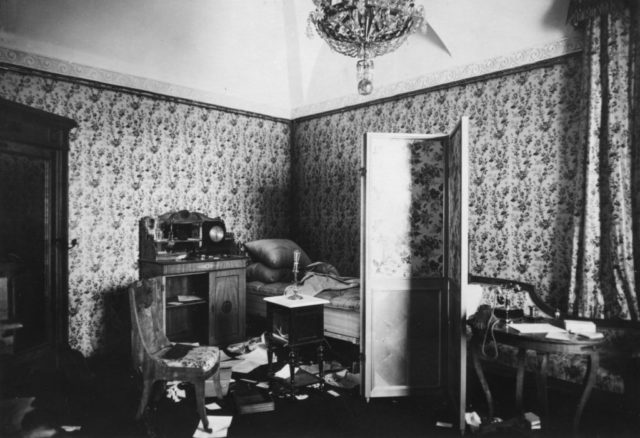 The Romanov Family had a strict regime while at Alexander Palace. All of them, including the Tsarina and Alexei, were engaged in physical labor. In their spare time, the Empress and her daughters engaged in sewing, embroidering or weaving. They were never idle. 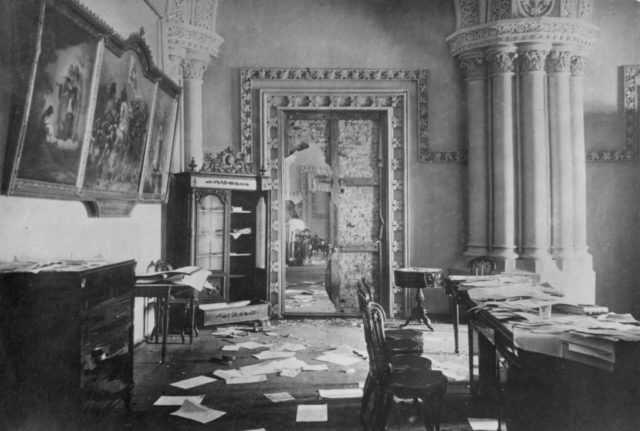 In August 1917, the revolutionary Alexander Kerensky decided to move the Romanov family further away from Saint Petersburg. They were relocated to Tobolsk in Siberia. 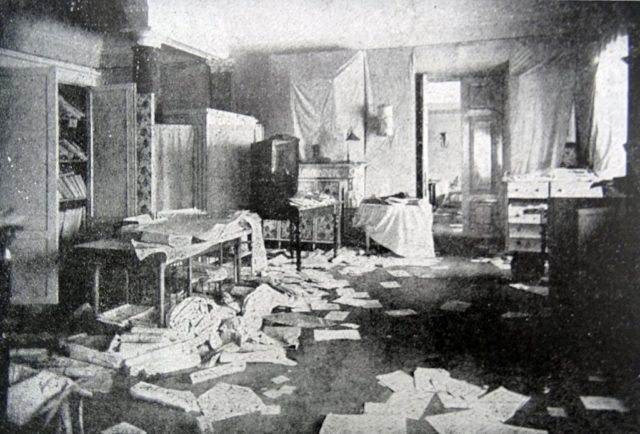 The Winter Palace (as pictured here) had not been used as a residence for royalty since Tsar Nicholas abdicated the throne. However, it was being used as headquarters for the provisional government and was a hospital at the time. During the October Revolution, the Bolsheviks stormed and looted the Winter Palace. 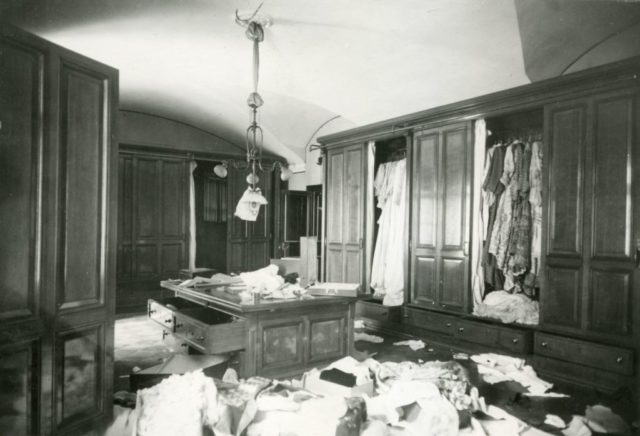 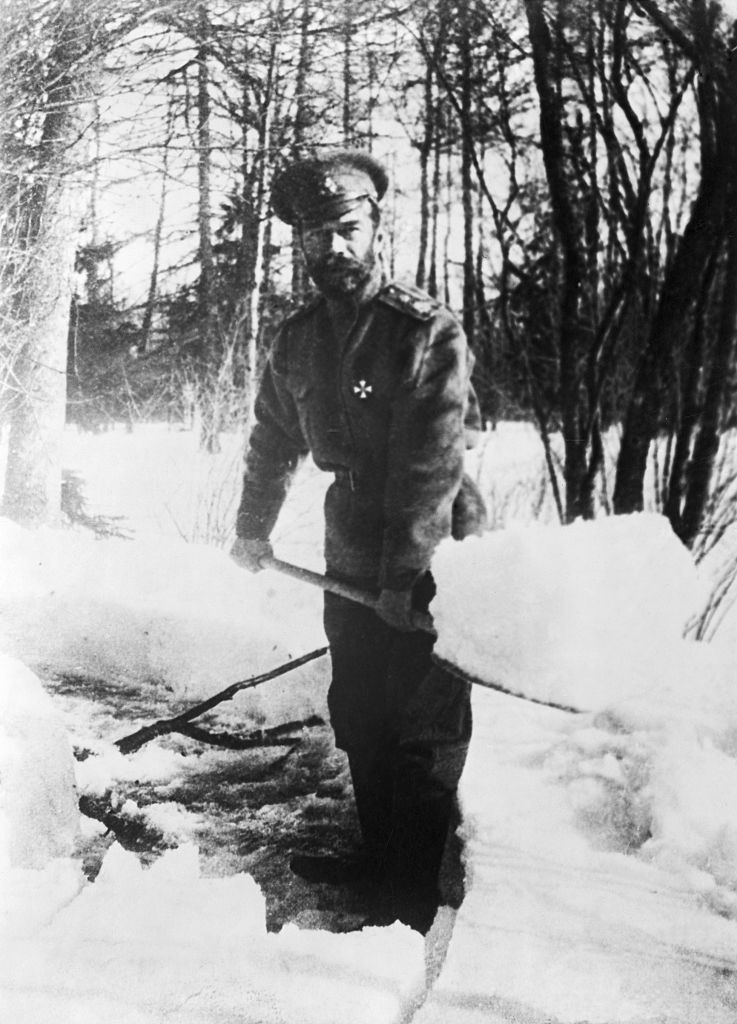 Photograph of Czar Nicholas II shoveling snow in the park at Tsarkoe, where the Romanov family was interned circa 1917. (Photo Credit: Bettmann/ Getty Images)

The Romanovs remained in Tobolsk, Siberia, from August 1917 to May 1918. While in Tobolsk, the family lived in the Kuklin House (Governor’s Mansion) in considerable comfort. 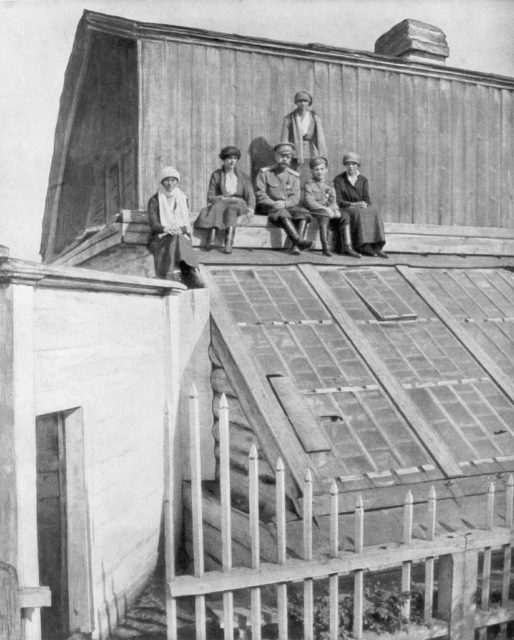 In May 1918, the family was moved to the city of Yekaterinburg, where they were kept in the Ipatiev House. Here, they were under close watch. The family could only speak Russian, could not access their luggage, were subjugated to regular searches and had all of their remaining belongings confiscated. Every time one of them wanted to leave their rooms to use the washroom, they would have to ring a bell to get the guards to unlock their door. 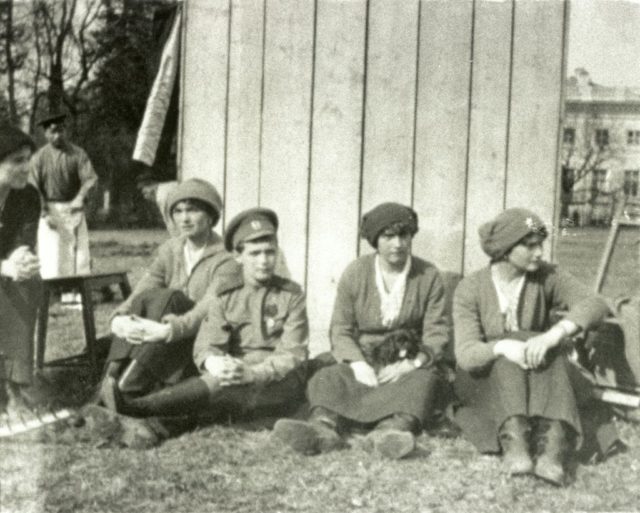 Late on the night of July 16, 1917, Nicholas, Alexandra, their children and four remaining servants were ordered to get dressed and go down to the cellar of the Ipatiev House. Initially, they were told that they were being photographed to ease rumors going around that the family had escaped. 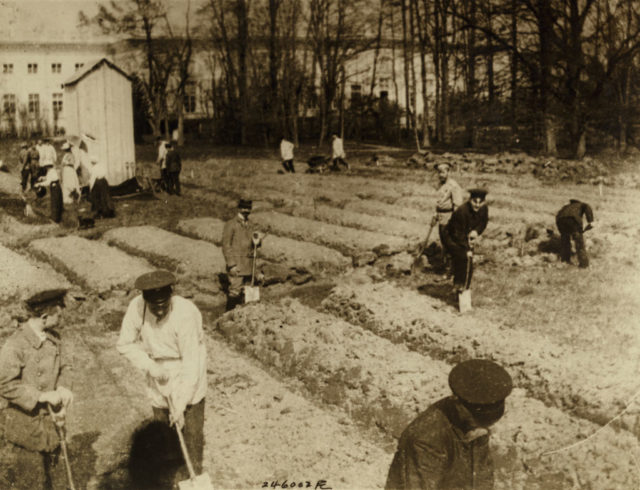 Suddenly, about a dozen men burst into the room and shot the imperial family and their remaining servants. Anyone found to be still breathing after the storm of bullets was stabbed to death with bayonets. 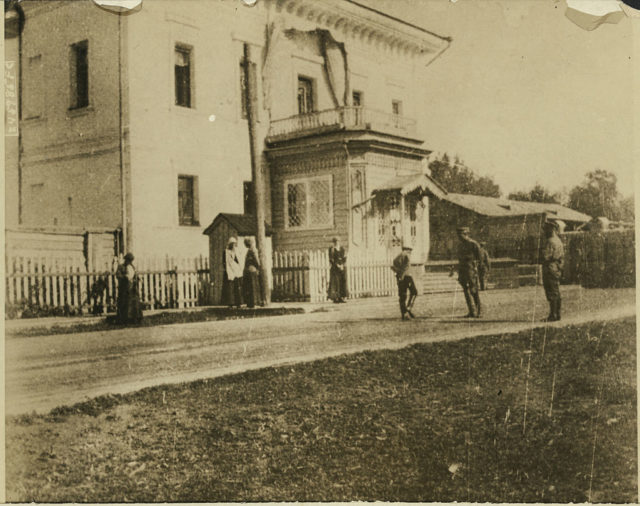 More from us: Dazzling Color Photos of the Legendary Romanov Costume Ball of 1903 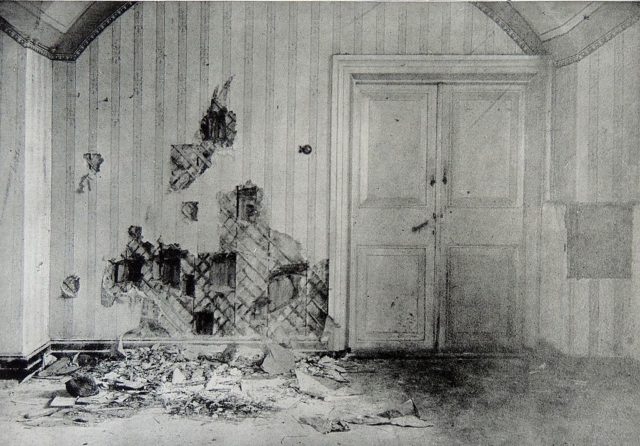 Room where the Romanov family were killed on the night of 16/17 July 1918 (Photo Credit: Universal History Archive/ Getty Images)

The graves of the Romanov family were discovered in 1991, and their identities confirmed by DNA testing. The remains were then reburied in a family crypt in St. Petersburg.

« Here’s Why Some People Thought the Pollock Sisters Were Proof of Reincarnation
Minnie Mouse Has a New Look – She’s Rocking a Pantsuit! »