There are few among us who don’t hope that existence continues after death, and many believe in reincarnation – the idea that your soul will be born again in a new body when your old one expires.

There have been various instances of alleged reincarnation over the centuries, but the case of the Pollock sisters is often held up as one of the stronger examples to support the theory of reincarnation. Their story first appeared in newspapers, and later in books by reincarnation researcher Ian Stevenson. To this day, the case continues to fascinate. Read on to find out why this family’s tale has haunted so many people.

In the market town of Hexham, England, Florence and John Pollock were an unremarkable and happy Catholic family. They had four sons and eventually, Florence gave birth to two daughters as well. Joanna was born in 1946, and her sister Jacqueline joined the family in 1951. 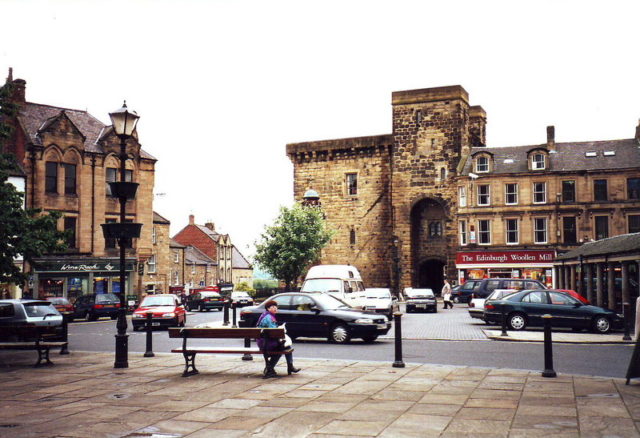 Since Florence and John ran a milk delivery business, the children were often left with their grandmother. Joanna was a generous child and she would often look after Jacqueline, who liked to dress up and play games of imagination.

On May 5, 1957, the girls were heading to church with their nine-year-old friend Anthony. As they were walking along the pavement, a car veered off the road and smashed into them.

The girls died at the scene and poor Anthony died en route to the hospital. Joanna was 11 and Jacqueline only six when their lives were cruelly snatched away.

It turned out later that the driver, named Marjorie Winn, had been intoxicated when she got behind the wheel. She’d overdosed on aspirin and phenobarbitone after losing custody of her children and had intended to take her life. There are also suggestions that she deliberately plowed into the children as a twisted act of revenge against the world. 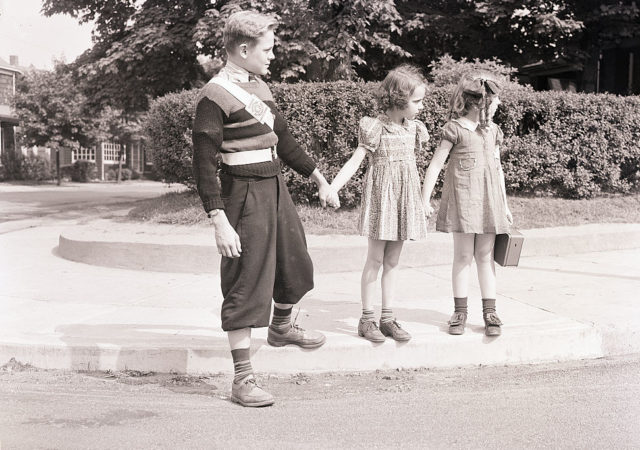 A boy helping two little girls cross the street. All three are holding hands and looking down the street for oncoming cars. Undated photo circa 1940s. (Photo Credit: Bettmann / Contributor)

Whatever her true motivation, Marjorie was the only one to walk away from the accident, and she was later committed to a psychiatric hospital.

Although both Florence and John grieved, it wasn’t long before they had something to look forward to when Florence became pregnant again. On October 4, 1958, she gave birth to twin daughters whom they named Gillian and Jennifer.

The peculiarities of this case started even before the girls were born. While there was no history of twins in either family and Florence’s doctor had heard only one heartbeat upon examination, John was adamant that Florence would give birth to twins, and twin girls at that. 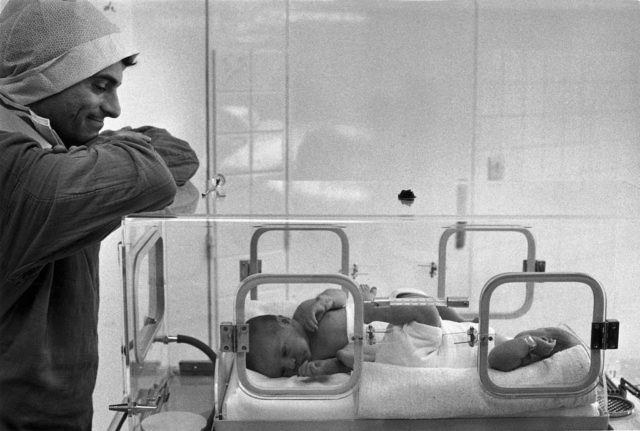 John claimed that Joanna and Jacqueline had been killed as a punishment from God because John had dared to ask for proof of reincarnation. He’d read a book about it as a child and been fascinated by the concept ever since, even going so far as to question his Catholic faith. Now he claimed that these twin girls were his daughters reincarnated.

One element that makes this case quite compelling is that despite being identical twins, Gillian and Jennifer exhibited different physical traits.

Jennifer had a birthmark on her hip – a patch of darker skin the size and shape of a thumbprint. Gillian had no matching birthmark as some twins do. What’s strange is that Jennifer’s birthmark matched one that Joanna had possessed in the same place.

In addition, a birthmark that Jennifer had on her forehead that Gillian lacked was very similar to a scar that Joanna had received from falling down in 1954. 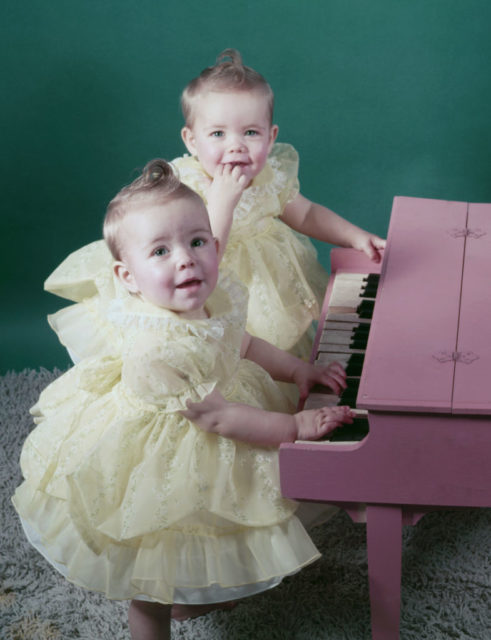 According to the Unexplained Podcast, there were other physical differences too: “Despite being identical, Gillian’s body was slender like Joanna whereas Jennifer was stocky like Jacqueline. Where Gillian’s gait was sply-footed (sic), again like Joanna, Jennifer’s was ordinary just like Jacqueline.”

All families keep old toys up in the attic, and the Pollocks were no different. But Florence was in for a shock when she brought down Joanna and Jacqueline’s toys for her new daughters to play with.

Gillian took Joanna’s old toys while Jennifer picked out Jacqueline’s. Neither of them fought over the toys (an almost unheard-of event for four-year-olds) and just automatically took the ones they recognized. Furthermore, they were able to identify which toys had come from Santa. 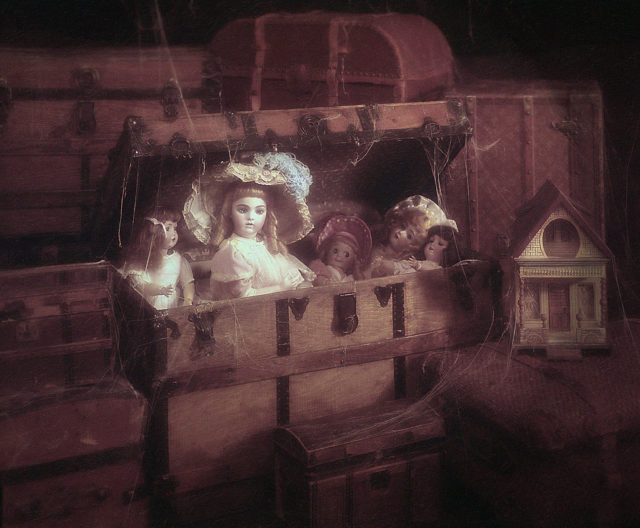 View of five dolls arranged inside a wooden chest stored in an attic, 1980. The chests are covered in cobwebs and there is a small dollhouse visible on the right. (Photo Credit: Tom Kelley/Getty Images)

Some sources take this story a step further by suggesting that Gillian and Jennifer actually asked their mother for their “old toys,” and it was that request that prompted their mother to bring the box down from the attic.

Just after the twins were born, the family had moved to Whitley Bay, 30 miles away. Despite that, when they moved back to Hexham a short while later, the twins were able to identify various places that they couldn’t possibly have seen before in their lives. These included Joanna and Jacqueline’s favorite park as well as Hexham Abbey.

John later recounted that “as he was with walking the twins up the Hill towards St. Mary’s church, one turned to the other and said the school is up here where we used to go to and the playground is round the back. At the time not only would they have been too small to see the school from where they were but there was also a large wall obscuring their view.” 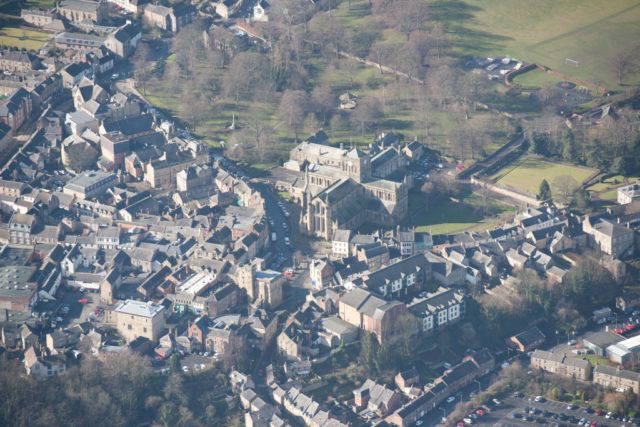 For John Pollock, all the evidence of reincarnation was there. But his wife was not entirely convinced – yet.

Florence was a committed Catholic and refused to believe in reincarnation. However, even she was unable to rationalize away a game she found them playing one day. She discovered Jennifer lying on the floor, her head being cradled in Gillian’s lap. Florence overheard Gillian telling Jennifer: “The blood’s coming out of your eyes. That’s where the car hit you.”

In another incident, Gillian recounted exactly how Jacqueline had gotten her scar by pointing at Jennifer’s birthmark and saying, “That is the mark Jennifer got when she fell on a bucket.”

The factors pointing to a link between the twins and the departed children just kept piling up. The twins liked the same foods, clothing, and songs as their predecessors. They could identify friends and neighbors. Gillian (born ten minutes before Jennifer) looked after Jennifer in just the same way that older sibling Joana had looked after Jacqueline when they were alive. 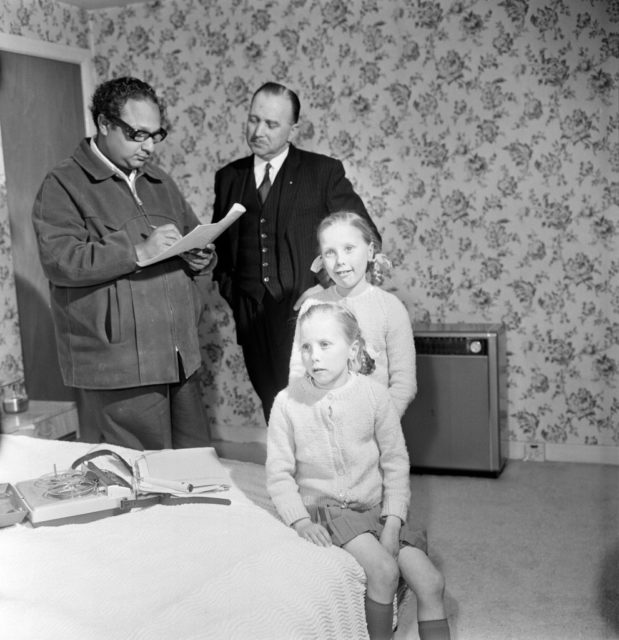 The Pollock twins, Gillian and Jennifer. Their father believes they are reincarnations of his two daughters, Joanne and Jacqueline who were killed in 1957. Dr Banerjee has come over from India to interview the two girls in connection with his research into extra sensory perception, telepathy etc. Pictured, left to right, Dr Hemendra Banerjee discusses his questionnaire with John Pollock, father of Jennifer and Gillian Pollock, 11th April 1966. (Photo Credit: Chris Paterson/Mirrorpix/Getty Images)

Perhaps most peculiar of all was a phobia of cars they had when young. The twins suffered from recurring nightmares of being hit by a car and, when startled by cars on the street, would shout something like: “The car! It’s coming for us!”

An academic declares children are more credible than adults

Dr. Ian Stevenson was a professor of psychiatry from the University of Virginia School of Medicine. He included the Pollock girls in his book entitled Children Who Remember Previous Lives: A Question of Reincarnation (1987) as one case study out of fourteen.

Stevenson thought that cases involving children were more credible because children were less likely to make things up. In contrast, an adult who claims to have been reincarnated might have been swayed by things they’d read or seen on TV.

Skeptics think the girls might have been influenced by their parents

The Morbid Library puts forward a skeptic’s theory: “the idea that the parents may have planted memories in Gillian and Jennifer – either consciously or unconsciously. It’s possible that they mentioned their late daughters in passing – i.e. that was Jacqueline’s favorite toy or we used to take Jacqueline and Joanna to this park. Kids are far more perceptive than they get credit for.”

After quoting others, the author of The Morbid Library article then puts forward an alternate theory of his own: that Jennifer had Jacqueline’s memories and passed along crucial details during play and conversation with her sister. After all, there was nothing tying Gillian to Joanna, but there was the matching scars in the case of Jennifer and Jacqueline. 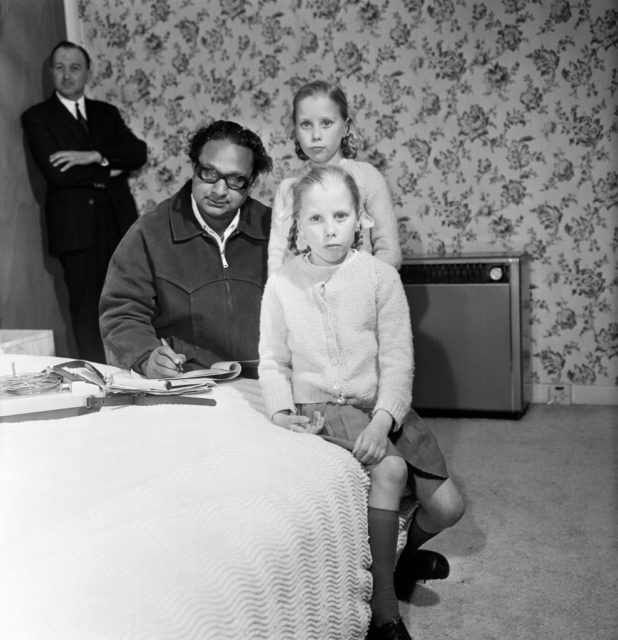 The Pollock twins, Gillian and Jennifer. Their father believes they are reincarnations of his two daughters, Joanne and Jacqueline who were killed in 1957. Dr Banerjee has come over from India to interview the two girls in connection with his research into extra sensory perception, telepathy etc. Pictured, Dr Hemendra Banerjee with Jennifer and Gillian Pollock, 11th April 1966. (Photo Credit: Chris Paterson/Mirrorpix/Getty Images)

Nobody thinks to mention the brothers

Several of the articles on the Pollock sisters neglect to mention that Florence and John already had four sons by the time the girls came along.

The Mama Mia website points out that it’s possible the girls got information about their deceased sisters from their older brothers.

The Unexplained Podcast agrees, stating: “Although the parents maintain that they never openly discussed their recently deceased daughters it is hard to believe that the four boys kept an equally quiet council.”

Could Florence’s evidence be the key?

While some might say that grieving parents would find comfort in the idea that their deceased daughters were returned to them, one academic felt that Florence’s beliefs actually made the case more credible.

According to the Unexplained Podcast: “Dr. Jim Tucker, a research partner of Professor Stevenson, has also pointed out that for Florence it was a constant struggle to reconcile the evidence of her own eyes with the Church’s edict that belief in reincarnation was a mortal sin. As such the possibility that the girl’s (sic) had been reincarnated brought no comfort to her whatsoever and such (sic) she should be regarded as an excellent impartial witness.”

More from us: Goodfellas of London – The Rise and Fall of the Notorious Kray Twins

The memories depart but the questions continue

From their fifth birthday onwards, the twins’ memories of their past lives began to fade. However, the physical evidence of the birthmarks still remained, and a further incident later added fuel to the debate.

In 1981, Gillian revealed that she’d had visions about playing in a sandbox in Whickham, England, and she could describe her surroundings in detail. While Gillian had never been to Whickham, the family had lived there when Joanna was a toddler.

Here’s a brief video with footage of the twins and the Pollock family.