From Sisters To Enemies? The Feud That Left Lee Radziwill Out Of Jackie Kennedy’s Will

Occasionally, sibling rivalry can be healthy. Pushing yourself to one-up your sibling can help you grow and succeed in life, and hopefully bring you closer to your sibling in the end. However, that’s not always the case.

The Bouvier sisters were perhaps the most famous duo in the world at one point but were in constant competition with each other their entire life, vying for men, money, and the affections of their parents. We’ve broken down their complicated relationship, which eventually led to Lee being left out of Jackie’s will. 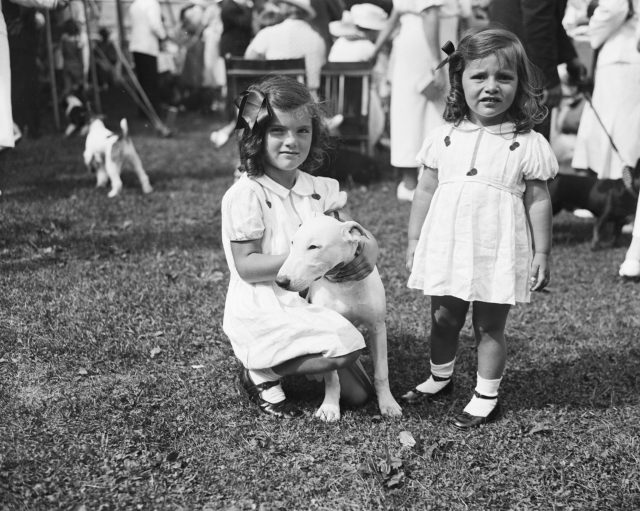 Jacqueline and Caroline Lee Bouvier were raised in the upper classes of New York society in the 1940s and 1950s. Jacqueline was three and a half years older than Lee and affectionately called each other “Jacks” and “Pekes” as children.

In 1936, the sisters’ mother, Janet Lee Bouvier, separated from their father, John Vernou Bouvier III, and was remarried to Standard Oil heir Hugh Dudley Auchincloss Jr. in 1942. The divorce must have been difficult for Jacqueline, as she had outwardly been her father’s favorite daughter. Lee also picked up on this, recalling in her book Happy Times that her father “favored Jackie… that was very clear to me, but I didn’t resent it, because I understood he had reason to… she was not only named after him, but she actually looked almost exactly like him, which was a source of great pride to my father.” 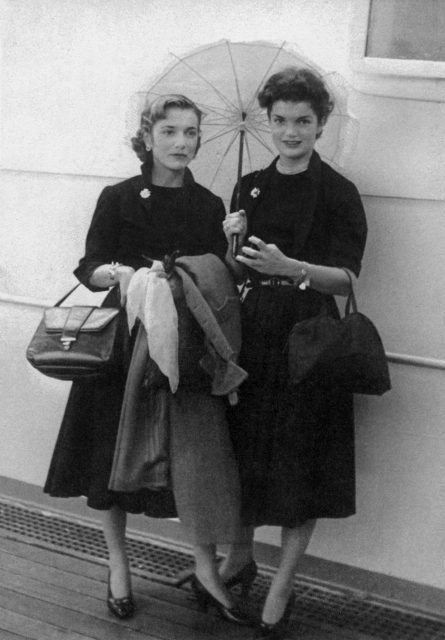 After Janet and John divorced and Janet had remarried, the girls were moved to the Merrywood estate in McLean, Virginia, and summered at the Hammersmith Farm in Newport, Rhode Island. Suddenly, Lee and Jackie found themselves in a family with four step-siblings, trying to maneuver their way around this new world.

Rather than bond together over the divorce, the girls continued to work against each other. For example, in August 1947, at Jackie’s coming-out party at the Newport Clambake Club, Lee stole Jackie’s thunder by showing up in a pink, strapless dress with rhinestones all over it. 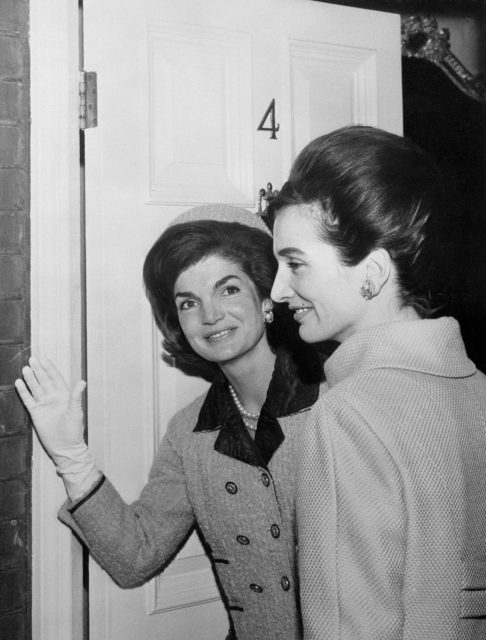 On April 18, 1953, Lee married publishing executive Michael Canfield, beating her older sister Jackie to the altar. However, their mother Janet didn’t hold Lee’s husband in the warmest regards, wanting her daughter to marry a wealthier man. The couple soon moved into a tiny penthouse apartment in New York, but they quickly packed up and moved to London, England, after Canfield was offered a better position.

Although Lee married first, Jackie was engaged within two months of her wedding – to someone their mother approved of. Jackie snagged one of America’s most eligible bachelors, the soon-to-be senator from Massachusetts, John F. Kennedy. Jackie and JFK’s wedding was the “social event of 1953,” and both Joseph Kennedy Sr. and Janet Lee Bouvier played a big role in orchestrating the wedding.

Back in London, Lee’s social life was flourishing, but her marriage was deteriorating. Growing tired of Canfield’s drinking and frustrated with the fact that she couldn’t conceive, Lee started an affair with Polish aristocrat Stanislaw “Stas” Radziwill. Radziwill had renounced his title when he became a British citizen after the German invasion of Poland, but despite the fact that he was no longer royalty, Lee often used the title “princess” after the couple wed in 1959.

Time in the White House 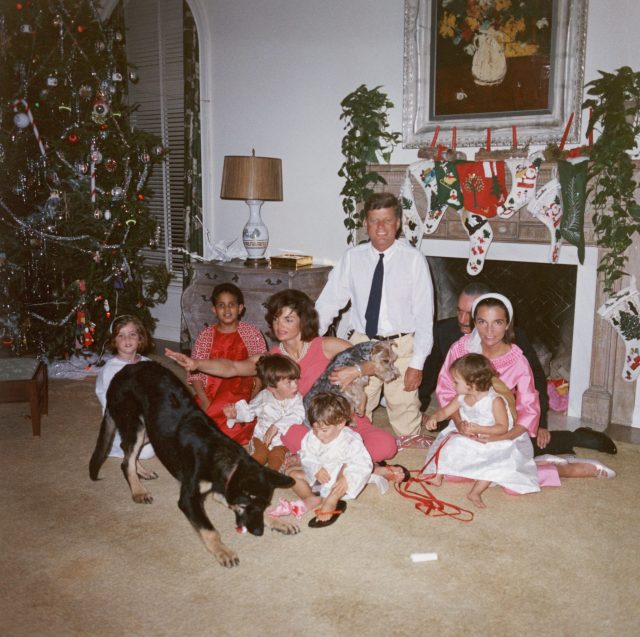 By 1959, Lee held the title “princess,” but even this honor was overshadowed in 1961 when Jackie Kennedy became America’s First Lady and gained worldwide attention. Interestingly, this brief time in the White House really brought the two sisters closer for the first time in their lives. Jackie often felt overwhelmed by her new status and set of responsibilities. Holidays were frequently spent in Palm Beach together with their children.

Although Jackie Kennedy is remembered as a style icon, it was Lee who gave Jackie fashion advice. Time magazine dubbed Jackie “The First Lady of Fashion” after the Kennedys’ 1961 Paris trip, but it had been Lee who was instrumental in choosing Jackie’s Givenchy wardrobe. 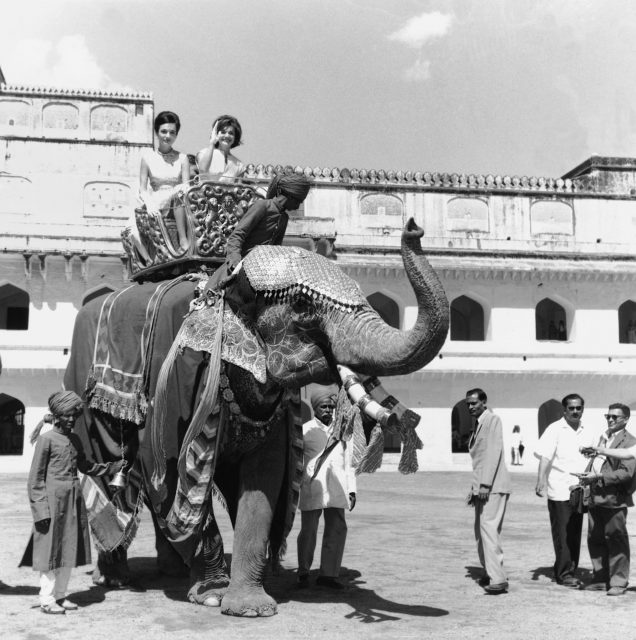 It was becoming more and more apparent that Jackie was the main character while Lee only played a secondary role. In 1962, when Lee accompanied Jackie on an official state visit to India and Pakistan, she sat quietly beside her sister while thousands of people shouted “long live Mrs. Kennedy” as their motorcade made its way through New Delhi, which heightened tensions between the two women. It wasn’t that Lee was not beautiful, intelligent, or successful, it was that she was not as known as Jackie which automatically made her a secondary character in her own life story.

Another interesting twist in the story of Lee and Jackie was that it was Lee who accompanied President Kennedy on his European tour to Great Britain, Ireland, Italy, and Germany in the summer of 1963. This was partially because Jackie was seven months pregnant at the time of this trip, had already suffered one miscarriage, and didn’t want to risk another one. 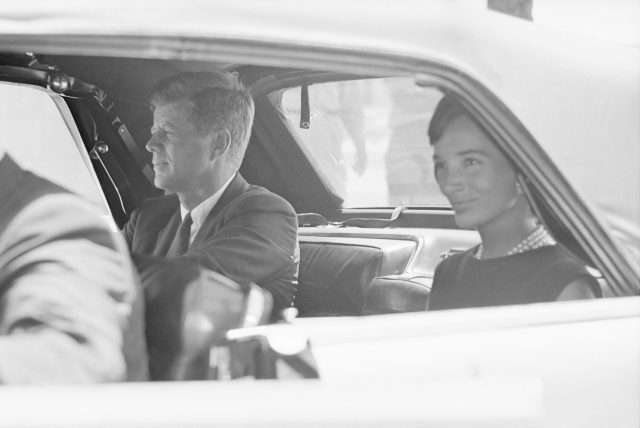 JFK thought it was a good idea to bring Lee on this European tour because by the summer of 1963, she had rather publicly began a relationship with Greek shipping tycoon Aristotle Socrates Onassis. Both John Kennedy and his brother Robert Kennedy, who was serving as the United States Attorney General, did not like Onassis. In fact, Robert Kennedy regarded Lee’s relationship with Onassis as a “betrayal of the whole family.” Lee was brought on this European tour, therefore, as a way to keep her away from Onassis.

Nonetheless, this tour didn’t stop Lee from seeing Onassis. After the tour, she returned to Greece, where she resumed her relationship with the shipping tycoon. Jackie Kennedy first met Onassis after her baby Patrick passed away in August 1963. Jackie could not fathom returning to Washington so quickly after the loss of her child, so Lee had Onassis invite Jackie to vacation with them on his yacht. Jackie spent four weeks with Lee and Onassis on the yacht, and left for Washington in better spirits. 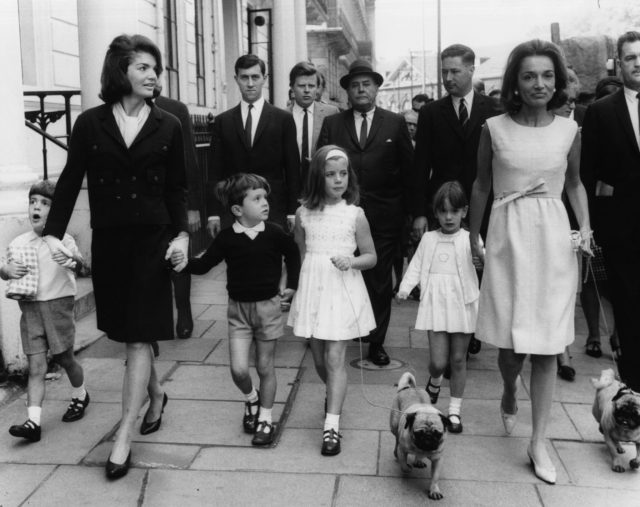 After Kennedy was assassinated in November 1963, Lee came to Washington to be with Jackie. One year later after Jackie had purchased an apartment in New York, Lee also decided to buy an apartment in the city. Here, Lee began thriving, feeling like she had much more freedom than she had when Kennedy had been in office. She started writing articles on fashion and culture for Ladies’ Home Journal and even tried her hand at acting, debuting as the lead in The Philadelphia Story. However, on Lee’s big opening night, Jackie failed to show up to support her younger sister.

As for Jackie, in the wake of her late husband’s assassination, she sought comfort in Aristotle Onassis. Although not in a place to begin a relationship, the two remained friends until 1967, when Onassis invited Jackie to his private Greek island. On October 20, 1968, Aristotle Onassis and Jackie were married. 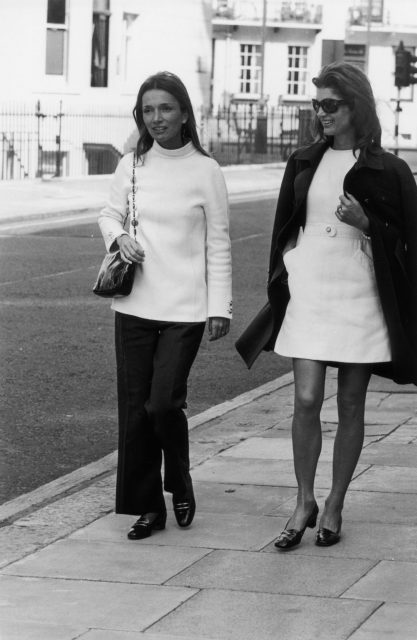 Jackie’s relationship and eventual marriage to Onassis bothered Lee- especially because she had considered at one point leaving Stanislaw “Stas” Radziwill for the shipping tycoon. However, Lee had supposedly stayed with Stas because she feared tarnishing the reputation of JFK and Jackie, who were still in the White House while she considered it. Lee felt that Jackie had stolen Onassis from her, which further put a wedge between the two sisters.

In the 1980s, Jackie and Lee’s mother, Janet, was diagnosed with Alzheimer’s and Jackie took care of her. It was during this time that Janet began favoring Lee over Jackie. In fact, Jackie found out that Janet paid Lee $750,000 to make up for favoring Jackie when the two girls were young. When Janet passed away in 1989, the sisters had grown even further apart. 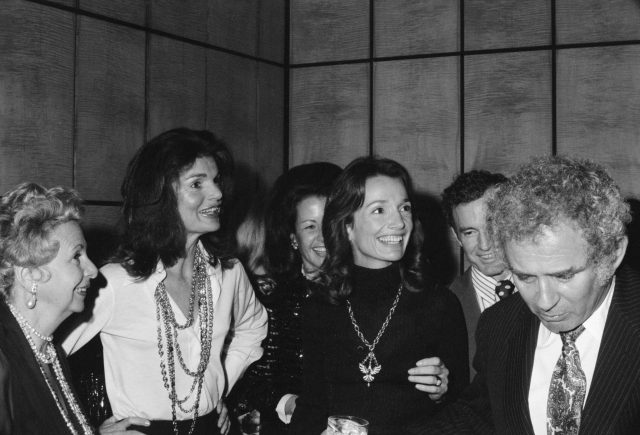 Aristotle Onassis died in 1975, leaving Jackie Kennedy with $25 million, on top of what she received from the Kennedy estate. In early 1994, Jackie was diagnosed with lymphatic cancer and succumbed to the illness on May 19, 1994. Surprisingly, Jackie left no money to Lee, but left substantial amounts of cash and valuable mementos to other family members, friends, and employees. Jackie had even set up $500,000 trust funds for Lee’s two children.

More from us: Inside The Kennedy “Curse” — The Family’s Strange Misfortunes Never Seem To Stop

Perhaps Jackie felt that she didn’t need to leave anything to Lee because she had helped her own during her lifetime (although the same could be said about Lee helping out Jackie). Or, perhaps, according to one rumor started by Lee’s first husband, Michael Canfield, because Lee had slept with John F. Kennedy on vacation and then bragged about it. Although we will never know the true reason Lee was left out of the will, these iconic sisters had lives marked by both rivalry and tragedy.

« House That Inspired ‘The Conjuring’ Sells for Over $1.5 Million – 27 Percent Above Asking!
Amateur Divers Uncover One of the Largest Collections of Roman Coins Off the Coast of Spain »