‘Arthur’ Comes to An End After 25 Seasons

The popular PBS Kids cartoon Arthur has officially come to an end after 253 episodes.

The series, based on the books by Marc Brown, premiered in October 1996 with its debut episode, “Arthur’s Eyes,” and became an immediate hit with audiences. Geared toward children aged four to eight, it followed eight-year-old Arthur and his friends as they navigated life as third graders in Elwood City.

“Arthur is the longest-running kids animated series in history and is known for teaching kindness, empathy and inclusion through many groundbreaking moments to generations of viewers,” said executive producer Carol Greenwald in a statement.

Among the “groundbreaking moments” presented on the show included featuring children with a variety of disabilities, including blindness, dyslexia and autism. It also presented issues children face on a regular basis, such as allergies, dealing with medical issues and life upheavals, such as moving away.

It even included the marriage of a same-sex couple, with the children’s teacher, Mr. Ratburn, marrying his partner, Patrick.

20 Years Later. Still the same friends you love 💗
Learn what Arthur and his friends grow up to be in an all-new episode of Arthur! #NowStreaming on @pbskids and on the @pbskids video app. #Arthur25 #Arthur pic.twitter.com/5xWarw6eQT

In total, Arthur ran for 25 seasons. Along with 253 episodes, there were also seven specials, including one featuring famed 2000s boyband, the Backstreet Boys. The majority of Millennials and Generation Z grew up watching the show before and after school and singing along to its iconic theme song, which was performed by Ziggy Marley and the Melody Makers.

Over the course of its run, the show won seven Emmy Awards and a Peabody.

In the lead-up to the premiere of the final four episodes, PBS Kids held a multi-day marathon. The finale, titled “All Grown Up,” aired on February 21, 2022 and gave viewers a sneak peek at what happened to Arthur and the gang once they grew up. It all started with them playing a fortune-telling game, which time traveled them 20 years into the future. 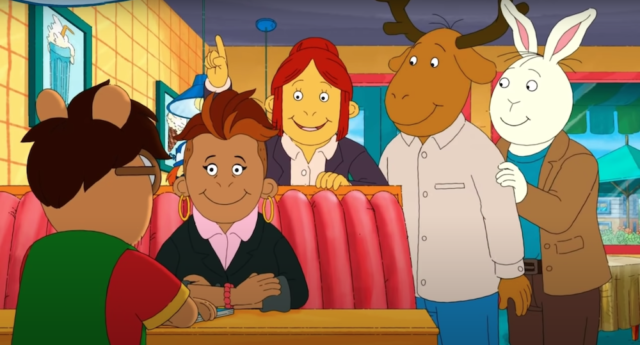 As it turns out, many of the gang didn’t pursue careers you’d expect. Not wanting to go down this route, the show’s creators honed in on each character’s three core values and made their career decisions from there.

Arthur became a graphic novel author, Buster became a schoolteacher, and Francine, the owner of a sneaker company.  D.W. decided to pursue a career as a traffic cop (the perfect job, considering how bossy she was growing up), Binky became a weatherman and Muffy is now a big-time politician running for mayor of Elwood City.

As for the gang’s favorite hangout, the Sugar Bowl, that’s now managed by George.

“Kids are our boss, and we listen to them,” Brown, who also served as co-executive producer on the series, told the Los Angeles Times. “And that is one of the most often asked questions we got: ‘What happens to Arthur? What happens to Francine?’ And so it seemed like a logical gift to give these loyal viewers something that they really wanted.”

Understandably, emotions are high regarding the series ending, as it not only was a staple of many childhoods, but often stayed with viewers well into adulthood in the form of popular internet memes. These include Arthur’s closed fist and D.W. standing by a swimming pool fence, staring longingly at the pool.

why this arthur finale got me tearing up?? he ended up getting an art drawing book from the library by accident and 20 years later he became an artist. and made a graphic novel about his life. and the first story of it was the first episode of arthur. 🥺 #arthur25 pic.twitter.com/4LNkzingdB

tuning into PBS kids to watch the arthur finale like pic.twitter.com/YWqCcmNtMg

hi sorry i'm emotionally overwhelmed rn, they just aired the series finale of Arthur and they time skipped 20 years, but the biggest surprise is they brought back the original voice from season 1-5 (Michael Yarmush) to play his adult self and I recognized it 😭♥️ #Arthur25 pic.twitter.com/IvAOxiYD51

More from us: Magical Facts We Learned from Watching the ‘Harry Potter’ 20th Anniversary Reunion

To mark the end of the series, Brown also released a new book, Believe In Yourself: What We Learned from Arthur. While it might be over, PBS Kids has stated the show will continue to appear in other mediums, writing in a statement that “new content from Arthur will continue to appear throughout 2022 and beyond in the form of a podcast, video shorts and digital games.”

Reruns will continue to be available for streaming via PBS Kids.