Following the Friends reunion special, Potterheads across the world were asking one question: where’s ours?! On January 1, 2022, their wish was granted, as the cast of Harry Potter reunited to celebrate the 20th anniversary of the first film’s release.

Here are nine magical facts we learned from watching the special, including exclusive behind-the-scenes information on Emma Watson and Rupert Grint’s iconic kiss in the final film.

They couldn’t find the actor to play Harry Potter

While it was relatively easy to find the actors to portray Hermione Granger and Ron Weasley in the Sorcerer’s Stone, the film’s casting director struggled to find that one special person to play Harry Potter – that is, until director Chris Columbus watched BBC‘s version of Charle’s Dickens‘ David Copperfield, which featured a young Daniel Radcliffe. 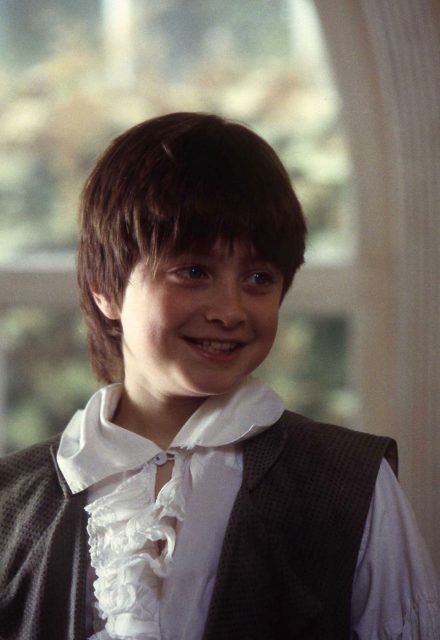 Columbus asked the casting director to bring Radcliffe in for an audition, but was shot down, as the boy’s parents weren’t a fan of the initial plan to film all seven movies in Los Angeles. However, producer David Heyman was eventually able to convince Radcliffe’s father to let him try for the role and the rest, as they say, is history!

Daniel Radcliffe wanted everyone to play it cool around Gary Oldman

The young cast of the Harry Potter films were surrounded by British acting royalty, but there was one actor who left Daniel Radcliffe star struck: Gary Oldman. Radcliffe revealed that Oldman was the first person he remembered “being in awe of” while filming the series, prompting Emma Watson to remind him of the talk he gave her before the famed actor came on set. 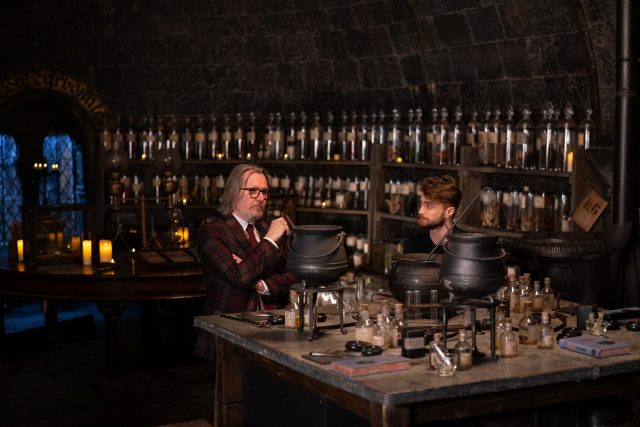 While Oldman’s character, Sirius Black, was killed off in Order of the Phoenix, Oldman’s time was memorable for his young co-star. David Heyman recalled how Oldman took Radcliffe under his wing, mirroring the relationship between Harry and Sirius, “You could see it in the way Dan looked at Gary, the adulation, the respect that he had for him.”

Actors will always try to take home props from the films they’ve worked on, so we’re not surprised Helena Bonham Carter took home a momento to remember her time as Bellatrix Lestrange. What is surprising, however, is that she chose to take the character’s teeth. 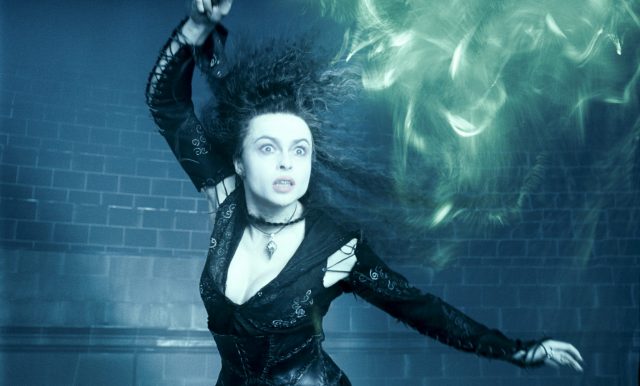 Helena Bonham Carter as Bellatrix Lestrange in Harry Potter and the Order of the Phoenix, 2007. (Photo Credit: GBatistaM / MovieStillsDB)

During her interview with Daniel Radcliffe, Bonham Carter took the teeth from her pocket, which she claimed to have not washed since filming ended, and popped them into her mouth! We definitely weren’t expecting that.

One of the more wholesome moments to come out of the reunion special was when Chris Columbus and Daniel Radcliffe spoke about the late Richard Harris, who portrayed Albus Dumbledore in the first two films. The pair revealed that Harris believed the animatronic Fawkes the Phoenix was a real bird, saying, “Wow, they train these animals marvellously these days!” 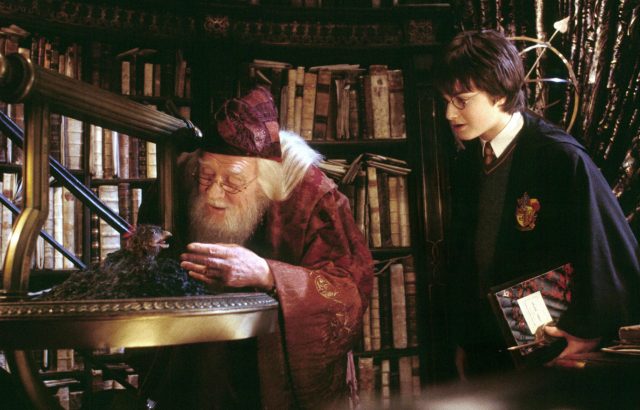 Richard Harris and Daniel Radcliffe as Albus Dumbledore and Harry Potter in Harry Potter and the Chamber of Secrets, 2002. (Photo Credit: Zayne / MovieStillsDB)

Not wanting to break the spell, the cast and crew never told Harris Fawkes wasn’t real and made the robotic bird move and react whenever he interacted with it.

Evanna Lynch was too star-struck to speak

Evanna Lynch was a long-time fan of the Harry Potter series when she auditioned for the role of Luna Lovegood in the fifth film, so it’s no surprise she was a little star-struck when it came to her screen test with Daniel Radcliffe. 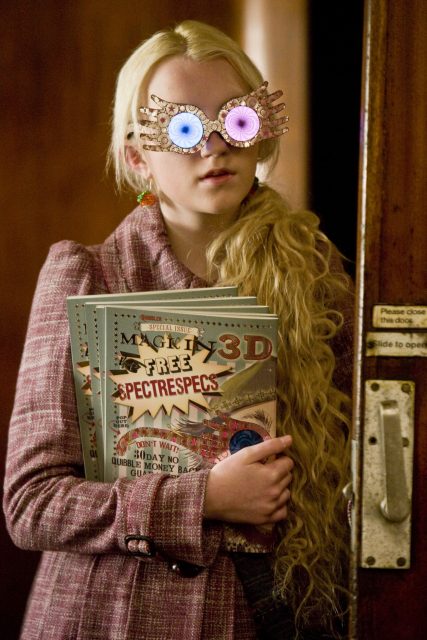 According to Lynch, she was so in awe of Radcliffe that she kept forgetting to respond to him while running lines. While many might assume that would work against her, she thinks the opposite, saying it helped contribute to the “whole Luna Lovegood vibe,” as the character herself is known to be a bit spacey.

The buildup to Ron and Hermione’s kiss

Harry Potter fans eagerly awaited the moment when Ron and Hermione expressed their feelings for one another, and it came during the Battle of Hogwarts in Harry Potter and the Deathly Hallows: Part II. According to Emma Watson, everyone wanted to be on set to watch it happen. She also knew she’d have to initiate it.

It certainly was an awkward moment, with her saying, “Kissing Rupert is one of the hardest things I’ve ever had to do. It just felt wrong, so wrong on every level because Dan, Rupert and I are so much siblings.”

Everyone is familiar with the scene in the Goblet of Fire when Fred and George Weasley attempt to submit their names for the Triwizard Tournament, only for their plan to backfire and turn them into old men. Angry, they fall to the floor and begin fighting. However, what many aren’t aware of is they needed some coaching from director Mike Newell to perfect their actions. 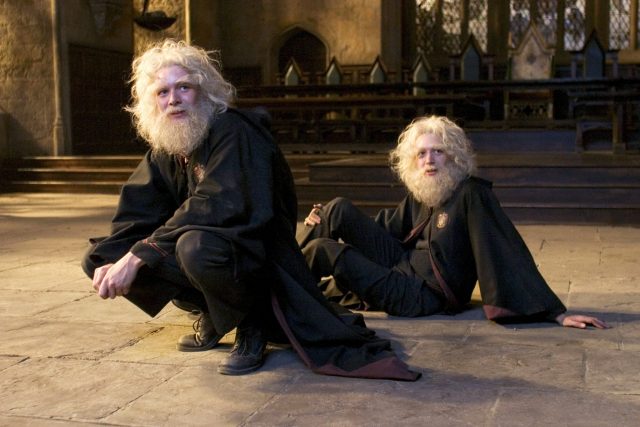 James and Oliver Phelps as Fred and George Weasley in Harry Potter and the Goblet of Fire, 2005. (Photo Credit: SpinnersLibrarian / MovieStillsDB)

According to Newell, the “two were sort of priss-ing about at it, and I said, ‘No, come on, boys, really, it’s a fight,'” which prompted him to challenge James Phelps to fight. Unfortunately, the plan backfired, as Newell ended up cracking his ribs while the two were rolling around on the floor and duking it out.

While we can’t imagine anyone other than Jason Isaacs playing Lucius Malfoy, the cold, cruel father of Harry Potter’s nemesis, Draco Malfoy, he never intended to take on the character. In fact, he’d hoped to play Gilderoy Lockhart. 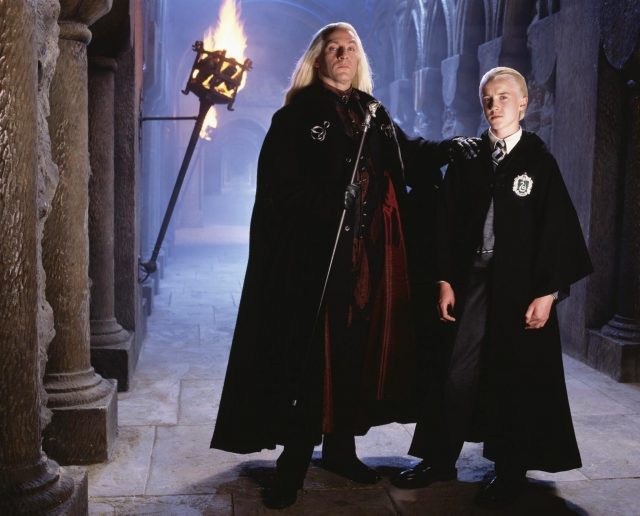 Jason Issacs and Tom Felton as Lucius and Draco Malfoy in Harry Potter and the Chamber of Secrets, 2002. (Photo Credit: SpinnersLibrarian / MovieStillsDB)

After running lines for Lockhart, Chris Columbus asked Isaacs to read for Malfoy, which he did through gritted teeth, as he was scheduled to portray Captain Hook in Peter Pan and didn’t want to play two villains. As he said in the reunion special, “I’m convinced I ended up playing Lucius because I didn’t want to.”

More from us: Did Emma Watson Really Almost Walk Away From €˜Harry Potter€™?

One of the more uplifting moments from Harry Potter and the Deathly Hallows: Part I is when Harry and Hermione are dancing together in the tent to Nick Cave & The Bad Seeds song, “O Children.” While initially worried the scene would be awkward to film, Emma Watson revealed it turned out to be one of her favorites from the entire series.

She shared that she liked that their characters were able to have a moment of fun and felt there were so many things unspoken in their movements. She credits the familiarity she and Radcliffe had with each other, saying she doesn’t think she could have filmed the scene with anyone else.