The Most Violent Escape Attempt in Alcatraz History

Between May 2 and 4, 1946, a 48-hour battle took place at Alcatraz, the prison known as “The Rock.” By the end of the siege, there had been five deaths (two guards and three inmates), and more than a dozen people had been injured.

During Alcatraz’s 29-year history, there were 14 escape attempts, but the Battle of Alcatraz ranks as the most violent one in the prison’s history.

The lowdown on Alcatraz

Alcatraz Federal Penitentiary in San Francisco Bay started out as a military prison before being transformed into a civilian prison from 1934 to 1963. During its lifetime, Alcatraz housed some of America’s most notorious criminals, including Al Capone. 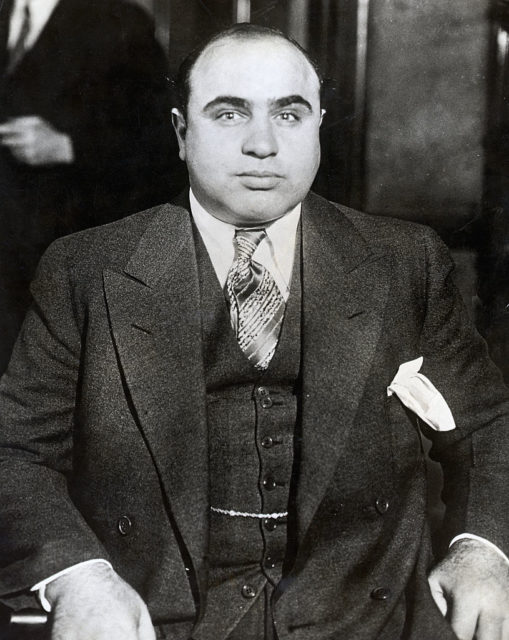 A nattily dressed Al Capone, who was the king of organized crime in Chicago during the late 1920s and early 1930s. (Photo Credit: Bettmann / Contributor)

Records suggest that no one ever managed to fully escape its thick walls and isolated location. While some prisoners did manage to break out, most were recaptured and those who weren’t were never seen again, leading to the assumption that they had drowned in the Bay.

In fact, to hinder prisoners’ escape attempts, the showers at the prison were deliberately warm – an unusual luxury in the penitentiary system and one that ensured the prisoners couldn’t acclimatize themselves to the cold waters of the Bay, should they ever manage to breach the walls.

However, even though the prison was famously impregnable, that didn’t prevent all escape attempts.

Bernard Coy (pictured further below) arrived in 1938, serving a 25-year sentence for bank robbery. He became the leader because his role as a cell-house orderly meant he had a certain degree of freedom of movement and was able to watch the guards, memorizing their routines. 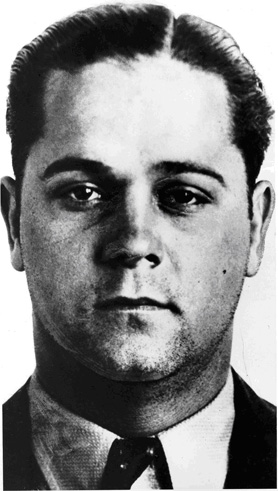 Having escaped from other prisons, inmate Joseph Cretzer had also previously tried to break out of Alcatraz with three other people in 1941. He’d failed and ended up spending five years in D Block, the unpleasant high-security wing of Alcatraz. 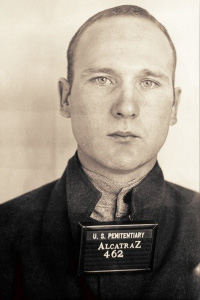 Sam Shockley had been part of Cretzer’s escape attempt in May 1941. Along with two other men working in the workshops, Shockley and Cretzer jumped the guards on duty and tried to saw through the window bars.

Marvin Hubbard and Miran Thompson were two more inmates in on Coy’s plan. Thompson had been arrested eight times and escaped from the small jail cells on every occasion, leading the authorities to determine that Alcatraz was the best place for him.

The final and youngest of the group – and also the youngest prisoner on Alcatraz – was Clarence Carnes. At only 18 years old when the Battle took place, he was two years into serving a 99-year sentence for kidnapping as well as a life sentence for murder.

While carrying out his role as an orderly, Coy spent a lot of time watching the guards and memorizing their routines. He could soon predict those times when officers would be elsewhere and the gun gallery was unobserved.

Coy also noticed that the gun room was only protected by bars. There was no wire mesh, and a man thin enough to squeeze through the bars could gain access to all the firearms he wanted.

With that aim in mind, Coy started losing weight. He also planned to use a homemade “bar spreader device” to create a wider gap between the bars. In addition, he secured a stash of axle grease that would make slipping through the bars even easier. 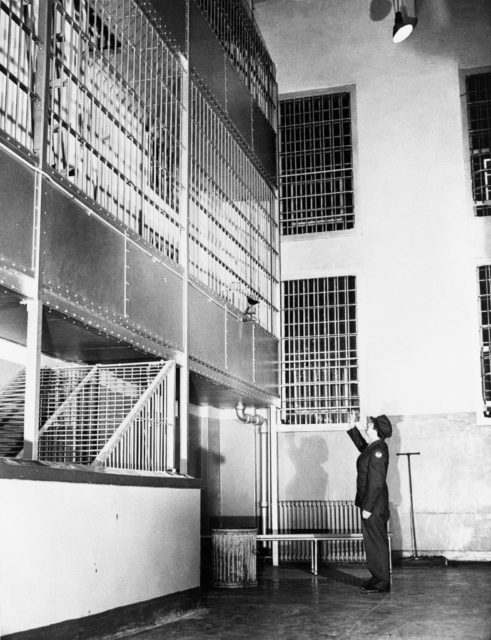 Photo shows a prison guard pointing to spot in the gun gallery where one escape plot ringleader, Bernard Coy, squeezed his way through the bars after using a prison made “separator” to widen two bars on the top deck. Photo by Harold Ellwood. (Photo Credit: Bettmann Archive/Getty Images)

Once they’d secured weapons, the plan was to hold other prisoners hostage in order to seize the prison dock. Once that was done, the prisoners could board the boat that docked there between 14:10 and 14:30 and be ferried away from the prison.

A smooth beginning leads to a fatal flaw

The first step was taken when most of the prisoners and guards were in outside workshops. In the main cell house, Coy was sweeping the floor and the man who patrolled the gun gallery was away from his post.

Hubbard worked as a kitchen orderly and had been cleaning the kitchen. He came to the door and asked officer William Miller to let him in. While Miller frisked Hubbard, Coy attacked the guard from behind.

Once the two of them had subdued Miller and taken his keys, they released fellow conspirators Cretzer and Carnes from their cells. It was then time for Coy to go to work on the barred door. His device managed to increase the gap from five inches to ten inches.

After Coy had slipped through the bars, he retrieved a riot club and waited in ambush for the next guard to arrive. After flinging the door open to unbalance the man and beating him with the club, Coy strangled him with his tie until he was unconscious. Making his way to D Block, Coy forced the guard there at gunpoint to release more prisoners, including Shockley and Thompson, and to open up the way between the main cells and D Block.

The guards were shut in C Block, and some of the prisoners actually returned to their cells, not wanting to be caught up in the escape attempt. 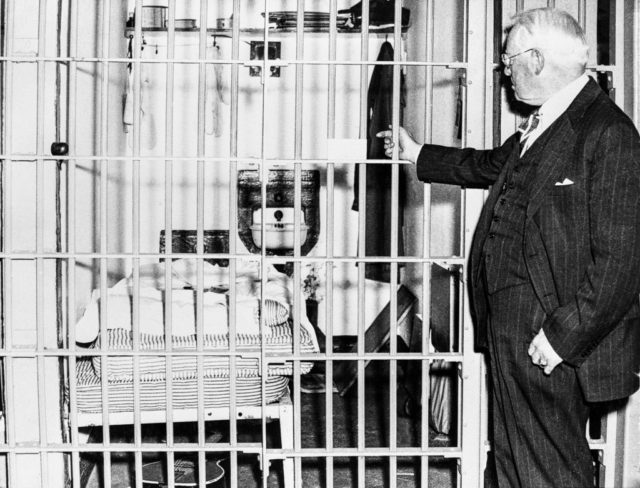 Photo shows the Warden of Alcatraz Federal Penitentiary, James A. Johnston (1874 – 1954), pointing into the cell in which seven prison guards were imprisoned by convicts during an escape attempt which became known as the Battle of Alcatraz. A dark spot on the center of the bed is blood from one of the guards who was shot in cold blood by Joseph Paul Cretzer, ringleader of the escape plot. Cretzer was slain at the climax of the battle. Photo by Harold Ellwood. (Photo Credit: Bettmann Archive/Getty Images)

But this is where a catastrophic flaw in the plan reared its head: while Coy and the others had taken most of Miller’s keys, the guard had managed to hold onto the key to the door that led out into the recreation yard. When he was locked in a cell, he hid the key in the toilet. So, the prisoners were free from their cells but still stuck inside the prison.

Their attempts to open the door just made things worse

To begin with, the prisoners started trying all sorts of different keys to open the door. Eventually, they found the key that Miller had hidden. Unfortunately, even when they used the correct key the door would not open. All their previous failed attempts had caused the lock to jam. 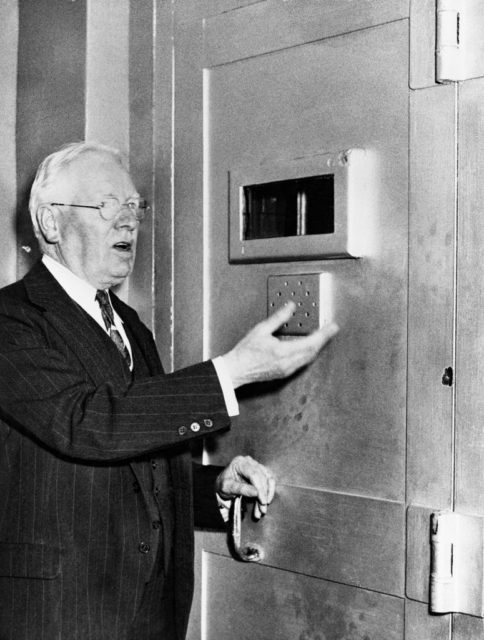 Warden James Johnston explains the “door that held.” It was the key to this door that guard William Miller concealed, thus barring the way to the outside yard and possible freedom to the inmates  (Photo Credit: Bettmann Archive/Getty Images)

They had guns and they had subdued the guards, but they had no way to the outside world. This left the prisoners with one option: to shoot their way out.

However, by now, they also had more hostages as other guards at the prison had come to investigate when their colleagues didn’t report in. Eventually, Coy and his gang had nine officers held in two cells.

By this point, the breakout had been discovered and sirens were wailing all around the prison. The Coast Guard and Marines were mobilized. All off-duty officers from the prison were assembled in an effort to retake the building.

Coy started firing on guards in the surrounding watchtowers, and he was even able to wound some of them. Sensing that they were in over their heads, Thompson and Shockley urged Cretzer to shoot the guards to prevent the men from testifying against them. Cretzer fired into the cells, wounding five of them, including Miller, who would eventually die from his wounds. 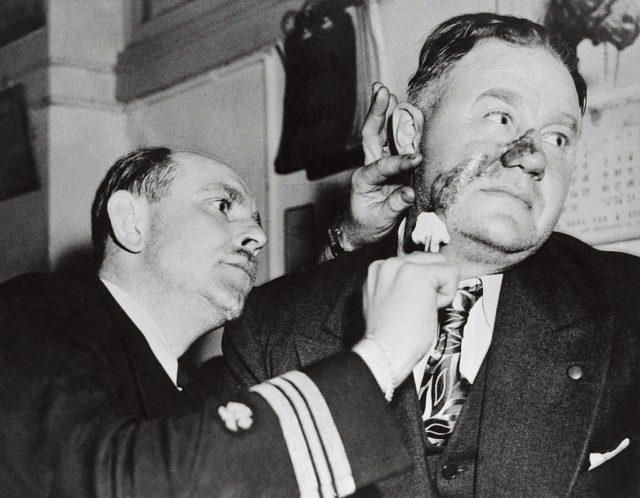 This is a photograph of Dr. Louis G. Rouchet, surgeon of the U. S. Public Health Service, as he attended to the facial wounds suffered by Associate Warden E. J. Miller, after a three-day battle on Alcatraz Island. Miller was injured when a convict shot a gas billy club out of Miller’s hand, causing it to explode in his face. (Photo Credit: Bettmann / Contributor)

In the end, Carnes, Shockley, and Thompson realized the situation was hopeless and returned to their cells. But Coy, Hubbard, and Cretzer were not going to give up.

At around 18:00 that evening, some armed officers managed to get into the gun cage, but four were wounded and one of them, Harold Stites, was tragically killed by friendly fire. After that, the authorities cut the power and waited for darkness to fall.

Shooting continues into the night

From 20:00 onwards, the authorities upped their attempts to regain control of the prison. The Marines drilled holes in the ceiling and dropped grenades into the prison. The explosions damaged the pipes, leading to D Block being flooded.

According to Wikipedia, during the Battle of Alcatraz, Robert Stroud (known as the Birdman of Alcatraz) actually tried to protect his fellow inmates: “Stroud climbed over the third tier railing and lowered himself onto the second tier, then dropped onto the floor of D Block. In what seemed to be a valiant move, he started closing the front solid steel doors of the six isolation cells to protect the helpless men. Stroud yelled to the Warden, explaining that there were no firearms in D Block and that those involved in violence had retreated to another section of the prison. He made it clear that many innocent men would die if the guards continued to fire into D Block.” 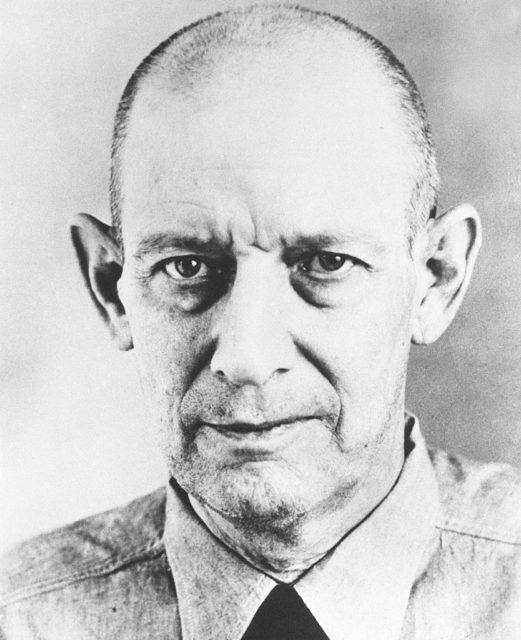 One of the best-known inmates of the prison is Robert Stroud, The Birdman of Alcatraz, who has spent 53 of his 72 years behind prison bars. Stroud was permitted to keep birds in his cell and maintain a laboratory during his prison terms. (Photo Credit: Bettmann / Contributor)

A deal discarded and more gunfire

The morning of May 3 dawned with no one having the upper hand. At 12:00, the prison warden spoke to the ringleaders and tried to reach a deal. However, the warden wanted complete surrender while Cretzer was determined that no one would take him alive. The stalemate led to more shooting.

The Marines kept up a constant barrage against the prison for the rest of the day and overnight. The next morning, armed officers tried a tactic of charging into the narrow corridor, firing several volleys at the prisoners, then retreating to safety again.

Finally, at 9:40 on May 4, the battle was over when prison officers retook the building. 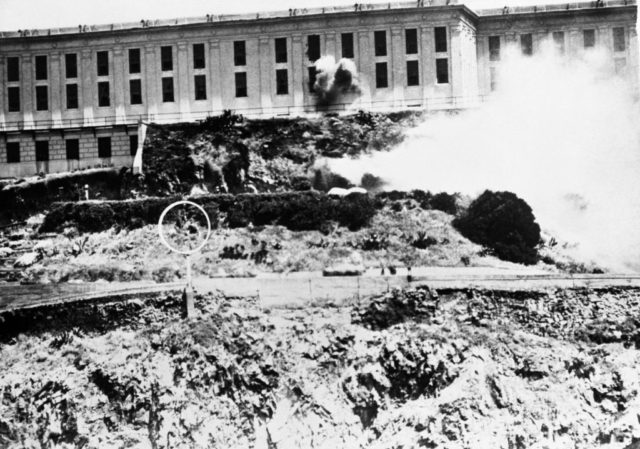 During the conflict, 14 guards were seriously injured and two died. Three inmates were also killed during the battle: Cretzer, Coy, and Hubbard were found dead from bullet wounds when the authorities finally managed to regain control of Alcatraz. 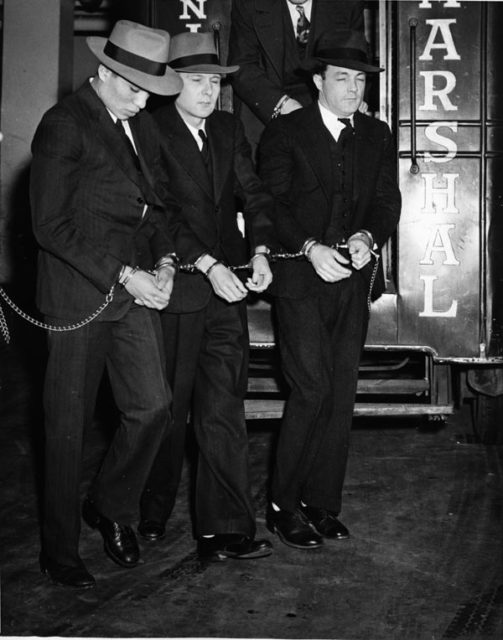 More from us: The Lavish Life Al Capone Lived While Imprisoned At Alcatraz

Thompson and Shockley were executed in a gas chamber in San Quentin Prison in 1948 for their part in murdering Miller. Carnes’s attempts to stop the killing of the guards meant he avoided the death penalty but had 99 years added to his sentence.