The Original Telling of Cinderella is a Lot, Lot Darker Than Disney Led Us To Believe

Most of us think of the 1950 Disney adaptation of Cinderella when asked about this favored fairy tale. But versions of the “rags to riches” story involving an oppressed young woman and a shoe date back to Greek and Roman times.

And some of these older tales are not nearly so nice as the Disney movie, but instead involve cutting off body parts, being blinded by birds, and Cinderella herself being a murderer.

Earliest versions of the rags to riches story: Rhodopis and Aspasia

Strabo, a Greek geographer, included one of the earliest versions of Cinderella in his book Geographica. His heroine was Rhodopis, who was a freed slave that became a courtesan.

“When she was bathing, an eagle snatched one of her sandals from her maid and carried it to Memphis; and while the king was administering justice in the open air, the eagle, when it arrived above his head, flung the sandal into his lap; and the king, stirred both by the beautiful shape of the sandal and by the strangeness of the occurrence, sent men in all directions into the country in quest of the woman who wore the sandal; and when she was found in the city of Naucratis, she was brought up to Memphis, and became the wife of the king.” 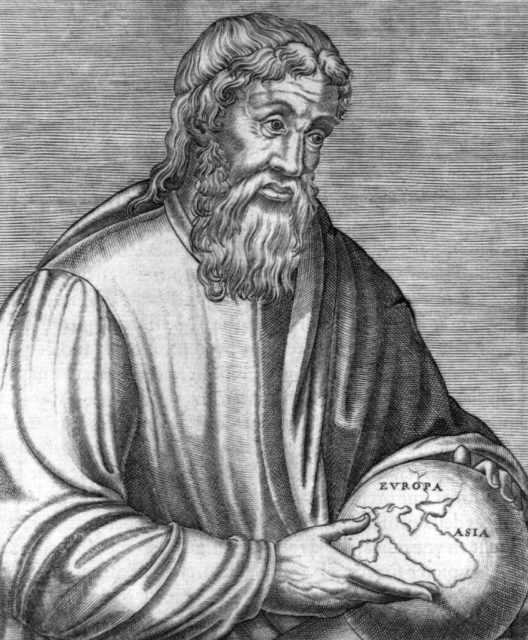 Strabo was born to an affluent family from Amaseia in Pontus (modern Amasya, Turkey); he is most famous for his work Geographica (‘Geography’), which presented a descriptive history of people and places from the different regions of the world known to his era. (Photo Credit:: Pictures From History/Universal Images Group via Getty Images)

Aspasia of Phocaea was the heroine of a story in Varia Storia, a book written by Roman author Aelian. This version bears a little more resemblance to the European tale we know today. One source provides the following helpful summary:

“Aspasia of Phocaea loses her mother at birth and her father brings her up in poverty. She dreams however that she will be with a noble man. But she is disfigured by a growth on her face. In a dream a dove appears and changes into a woman; Aspasia is instructed to treat the growth with Aphrodite’s roses; her beauty returns. She is now compelled to attend at a banquet of Cyrus the Younger with three other girls. The others are dressed and behave as courtesans; Aspasia modestly repels the prince’s advances and so attracts him all the more.” It all ends with them marrying, after which Aspasia continues to be a dutiful daughter and also remembers to repay Aphrodite for her help.

Put together, we can see how the fairy tale known as Cinderella is beginning to take shape. But it would go through a few more iterations before it got to Disney.

The first literary version of Cinderella is often attributed to Giambattista Basile, who included it in his book Pentamerone, published in 1634. The heroine is named Cenerentola, derived from “cenere,” the Italian word for ash. Servants in Italy at this time would often have ash on them from sitting close to the fireplace to keep warm. 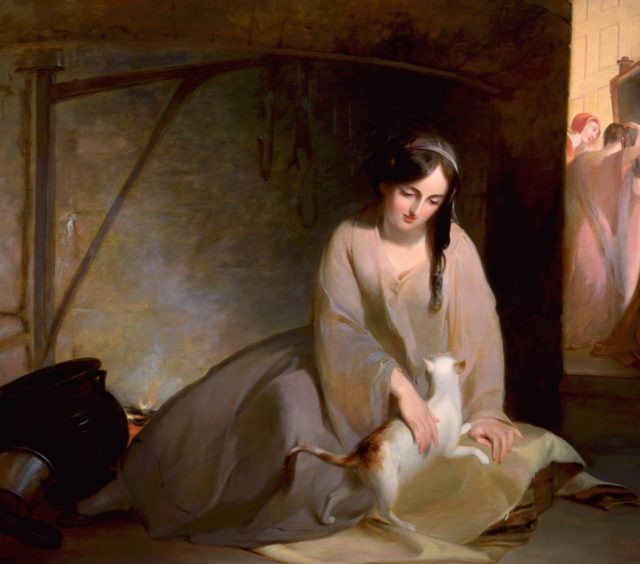 In this tale, we have the wicked stepmother, but with a bit more of a twist. The heroine – whose real name is Zezolla – has a kind and caring governess who convinces her that she should kill her wicked stepmother and get her father to marry the governess instead. Zezolla does as instructed, asking her stepmother to get a dress from a chest and then slamming the lid on her head.

The governess marries Zezolla’s father but then produces six daughters of her own, and all of them treat Zezolla as a slave, calling her Cat Cinderella. Although we’re back in familiar territory now, we got to this point by Zezolla killing her first stepmother to try and get a better one, making her a murderess from the start. Never mind Disney leaving this bit out – the murder didn’t even make it into the Grimms’ fairy tale, which is pretty dark all by itself.

When Zezolla’s father goes to Sardinia, he brings back gifts for all his daughters (although he almost forgets his own daughter’s gift). Zezolla plants the date tree her father has given her. A fairy inside this tree helps her to get beautiful gowns and win the heart of the King, making the final section of the tale similar to the version we know.

A folklorist almost as famous as the Grimm brothers is Charles Perrault, whose 1697 book, Histoires ou contes du temps passé (Stories or Tales from Past Times), laid many foundations for the fairy tales we know today.

His version of Cinderella was entitled Cendrillon, and it’s from his version that we get the pumpkin, the fairy godmother, and the glass slipper. Perrault’s story is almost identical to what we know today: a young girl treated cruelly by her stepmother and stepsisters, forced to sleep in the ashes; a ball thrown by a prince which Cinderella is told she’s not allowed to attend; a fairy godmother who turns a pumpkin into a coach, mice into horses, a rat into a coachman, and lizards into footmen; and the instruction that she must be home by midnight. 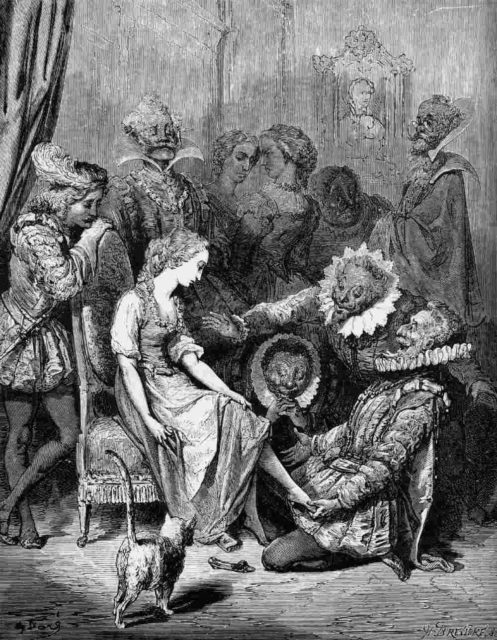 Unlike Disney’s Cinderella, Perrault’s heroine gets to attend a second ball at which she forgets the midnight edict and flees only just in time. Her slipper is found, but by then, she’s in rags again, so no one connects her to the beautiful maiden who fled just moments before. She is eventually identified and marries the prince, being gracious enough to marry her stepsisters off to other noblemen. This is an element that Disney eventually incorporated into its straight-to-DVD sequel Cinderella III: A Twist in Time (2007), where Anastasia gets a conscience and the credits show her finding a true love all of her own. 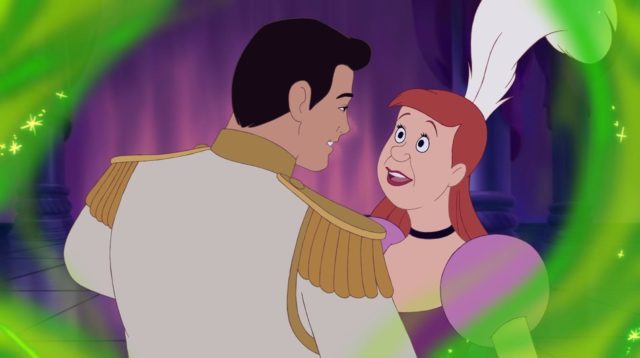 Perrault is noted for closing each tale in his book with a moral. He assigned two to Cinderella. Firstly, that beauty is a rare treasure, but graciousness is to be even more admired. Secondly, that while “intelligence, courage, good breeding, and common sense” are great virtues to have, they might be useless unless you have the blessing of a godparent.

The Little Ash Girl of the Brothers Grimm

Perrault’s story is much nicer and more family-friendly than some of those that had gone before. But when Jacob and Wilhelm Grimm came across the story of Aschenputtel (The Little Ash Girl) while collecting stories for their books, they found a much bloodier and more violent version. 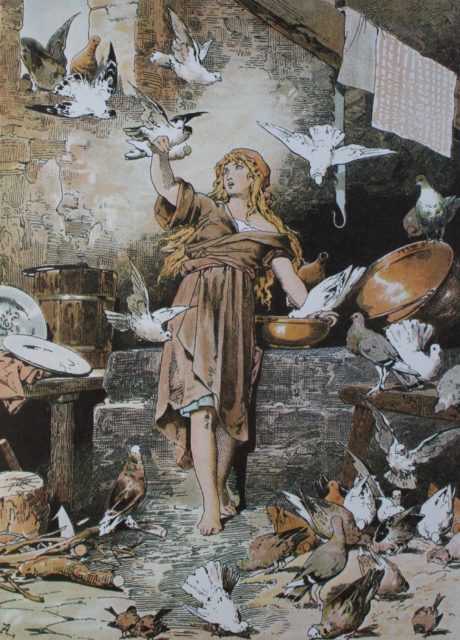 It starts out as you would expect: mother dies; father remarries; Aschenputtel becomes a servant but remains good and kind. When the father goes on a journey, the stepsisters demand costly gifts, while Aschenputtel asks only for the first twig to knock his hat off. She plants this on her mother’s grave and a hazel tree grows.

Aschenputtel prays beneath the tree and a white bird throws down to her whatever she wishes for.

This story provides us with our first glimpse of animal helpers, an element that became such a mainstay for Disney cartoons. When Aschenputtel asks to go to the ball, the stepmother throws some lentils into the ashes and declares that she can only go to the ball if she cleans them up in two hours. Aschenputtel does so with the help of some doves and pigeons that come when she sings. Of course, she’s still not allowed to go to the ball, even when she cleans up another lentil spillage. 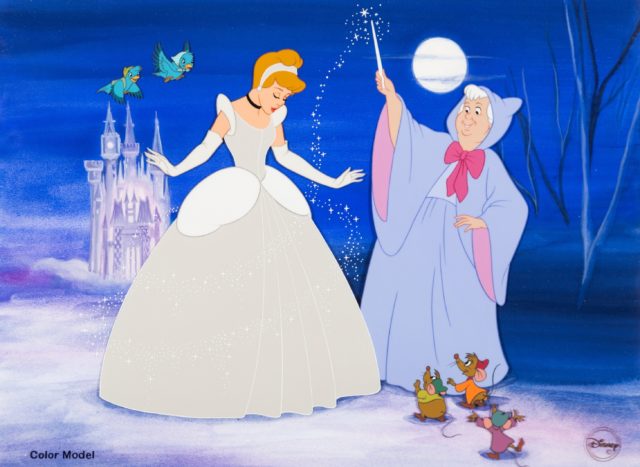 In the Grimms’ version, the prince hosts three balls, and the hazel tree provides Aschenputtel with three ever more beautiful dresses to attend each one.

But after that, things start to take a dark turn. When the prince visits the house with the slipper for the daughters to try on, the eldest goes first. “The eldest went with the shoe into her room and wanted to try it on, but her mother stood by. But she could not get her big toe into it, and the shoe was too small for her. Then her mother gave her a knife and said, “Cut the toe off; when thou art Queen thou whilt have no more need to go on foot.” The maiden cut the toe off, forced the foot into the shoe, swallowed the pain, and went out to the King’s son. Then he took her on his horse as his bride and rode away with her.”

This dastardly scheme might have worked if it wasn’t for the fact that the pair rode past the grave of Aschenputtel’s mother. Two birds rose up from the hazel tree and told the prince to look at the blood dripping from his bride’s shoe.

When it is time for the second sister to try on the shoe, her mother instructs her to cut off a bit of her heel so it will fit. Although the girl does so, the birds betray her again. When Aschenputtel is finally on the prince’s horse and heading for the palace, the two birds fly down to sit on her shoulders.

In the Grimms’ version, Aschenputtel’s happily-ever-after comes with a hefty dose of vengeance. In a coda that was included in the second edition (published in 1819), the two stepsisters turn up at the wedding and try to worm their way into Aschenputtel’s good favor. 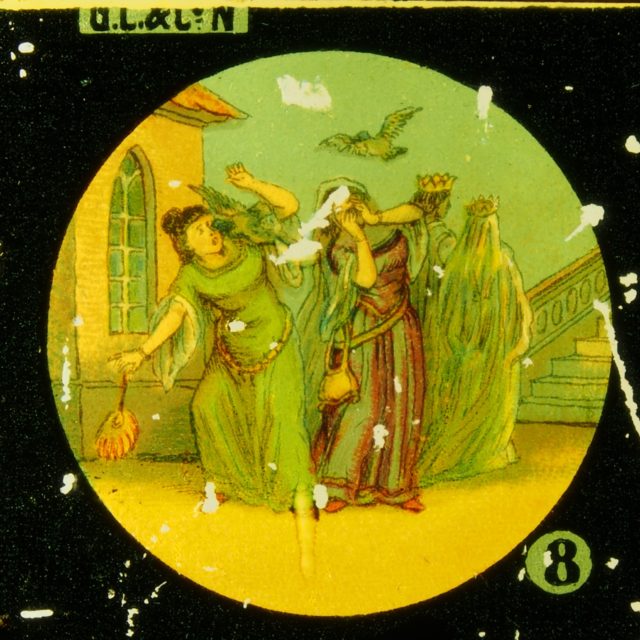 The stepsisters’ eyes get pecked out by the princess’ birds, her loyal friends and minions (Photo Credit: Unknown author – Own work, Public Domain)

“When the betrothed couple went to church, the elder was at the right side and the younger at the left, and the pigeons pecked out one eye of each of them. Afterwards as they came back, the elder was at the left, and the younger at the right, and then the pigeons pecked out the other eye of each. And thus, for their wickedness and falsehood, they were punished with blindness as long as they lived.”

More from us: ‘Something Wicked This Way Comes’ And Other Scary, Lesser Known Disney Stories

While it appears that the Grimms might have sanitized some of their fairy tales by removing the darker elements before printing, it’s safe to say that Disney is the greatest sanitizer of all. The heroines of their 1950 animated movie and 2015 live-action film are kind, caring, and proactive women. They are certainly murderesses, and they have helpful bluebirds rather than vengeful pigeons riding on their shoulders.

Maybe the Cinderellas of history are more suitable for an older audience.

« Think You Know Your ’80s Movies? From ‘E.T.’ to ‘Beetlejuice,’ Check Out These Classic Film Facts
Ancient Sarcophagus Uncovered Beneath Notre Dame Cathedral »