Scientists are in near disbelief after a recent discovery. The preserved leg of a dinosaur believed to have been killed the same day a giant asteroid collided with earth has been dug out of the ground of the Tanis fossil site in North Dakota. The limb is complete with the dinosaur’s original skin. 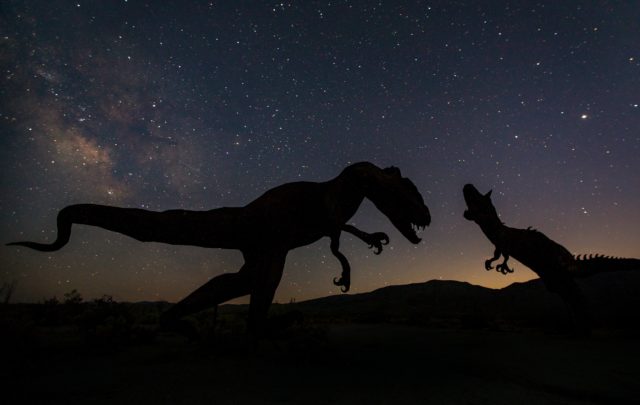 The dinosaur leg isn’t the only delicately persevered remain found at Tanis. Archeologists have also discovered fish fossils with their scales still intact. The belief is that these fish would have also breathed in the impact of the debris.

Archeologists at the Tanis dig site have also unearthed a fossilized turtle that was impaled by a wooden stake, the remains of multiple small mammals and the burrows they made, skin from a horned triceratops, the embryo of a flying pterosaur inside its egg, and perhaps even a small fragment of the asteroid itself. 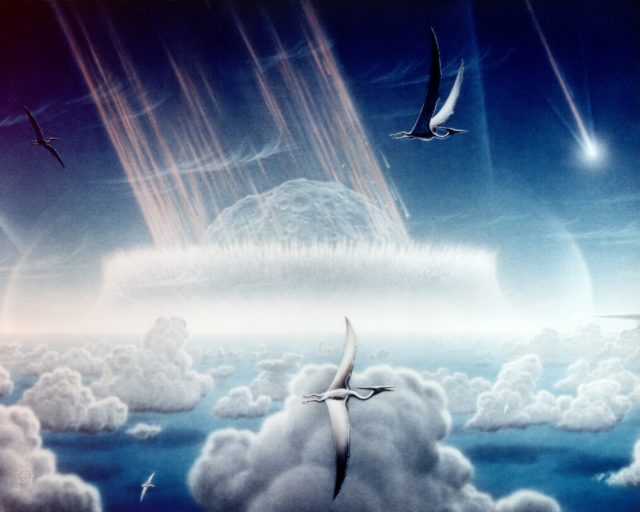 University of Manchester graduate student Robert DePalma, who leads the Tanis dig, explains the finds: “We’ve got so many details with this site that tell us what happened moment by moment, it’s almost like watching it play out in the movies. You look at the rock column, you look at the fossils there, and it brings you back to that day.”

Sixty-six million years ago, a massive asteroid roughly 12 kilometers wide collided with earth, ending the dinosaurs’ reign. In modern archeology, very few dinosaur remains have been found from the years before the collision, let alone the same day the asteroid struck.

The asteroid’s direct impact site has been identified in the Gulf of Mexico, off the Yucatán Peninsula – some 3,000 kilometers away from the Tanis site. However, the impact of the asteroid was felt all over the world. 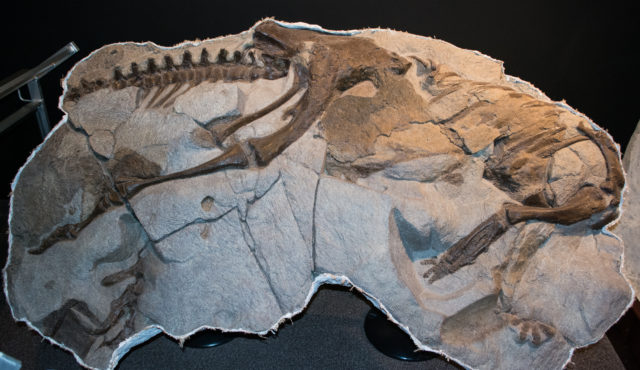 The Tanis fossil site is a chaotic blend of remains. The fossils of plants and animals have been mixed together into one big sediment dump created by waves and river water set in motion by enormous earthquakes. These tremors mixed the remains of aquatic organisms with land-based creatures.

These remarkable discoveries will be examined in an upcoming BBC documentary narrated by Sir David Attenborough. The BBC has spent the last three years filming at Tanis. To make the program, numerous outside experts were called in to consult on several Tanis discoveries.

One of these experts is Professor Paul Barrett from London’s Natural History Museum, who was called in to examine the well-preserved dinosaur leg. Professor Barrett is an expert in ornithischian (mostly plant-eating) dinosaurs.

He determined that the fossil is a Thescelosaurus. “It’s from a group that we didn’t have any previous record of what its skin looked like, and it shows very conclusively that these animals were very scaly like lizards,” he said. “They weren’t feathered like their meat-eating contemporaries.”

The dinosaurs died out… right… there…
Robert DePalma, University of Kansas, points out the KT boundary at the remarkable Tanis site in North Dakota. #Chicxulub pic.twitter.com/yAT6688se7

Professor Barrett also explained the dinosaur’s manner of death. “This looks like an animal whose leg has simply been ripped off really quickly. There’s no evidence on the leg of disease, there are no obvious pathologies, there’s no trace of the leg being scavenged, such as bite marks or bits of it that are missing. So, the best idea that we have is that this is an animal that died more or less instantaneously.”

Not all experts are as convinced of the discoveries found at Tanis. The Tanis fossil site first made the news in 2019 when discoveries there were first published in The New Yorker rather than in peer-reviewed journals. In the world of academia, it is tradition to initially present new findings in the pages of scholarly journals for other academics to read and debate the topics presented.

Many paleontologists were quick to raise an eyebrow at the findings presented in The New Yorker, especially because some of the claims released in the article were not mentioned in a scientific paper.

Another one of BBC’s expert consultants is Professor Steve Brusatte from the University of Edinburgh, who remains skeptical for the time being. Professor Brusatte would like to see additional arguments presented in more peer-reviewed articles so other experts can give their independent assessments.

Robert DePalma and Phillip Manning plan to present their latest data from Tanis to the European Geosciences Union General Assembly in May 2022. The BBC program, Dinosaurs: The Final Day with Sir David Attenborough, is set to premiere on BBC One on April 15, 2022. A PBS version of the program will be made available in the United States later this year.

« Dark Secrets and Dirty Laundry: Historical Figures With a Hidden Side
These Titanic Artifacts Reveal the Amazing Stories of Survivors »