This week, McDonald’s Corp announced plans to exit Russia, making it one of the largest companies to do so following the country’s invasion of Ukraine. McDonald’s closed most of its Russian restaurants in March, with the location at Moscow’s Leningradsky Station being one of the few to remain open. Over the weekend, people stood in long lines outside the restaurant, bringing to mind images from when the chain first arrived in the country.

To say people were excited about McDonald’s coming to Russia is an understatement. When the iconic restaurant chain first opened there in 1990, it represented the end of the Cold War and the introduction of capitalism. The locations were seen as a way for Russians to get a taste of Americana, even though the price of a burger was more than most customers’ daily budgets. Hundreds showed up for a taste of the “Bolshoi Mak.”

Let’s take a look back at the popularity of McDonald’s during those early years. 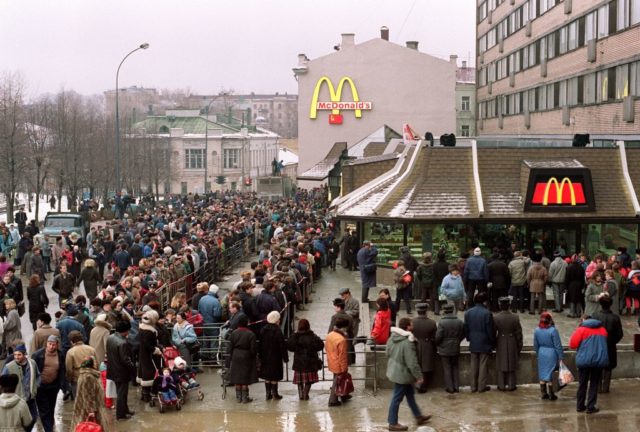 A shot of the crowd: customers stand in line outside the just-opened first McDonald’s in the Soviet Union on January 31, 1990. The location was based in Moscow‘s Pushkin Square.

More than 5,000 Russians lined up before the restaurant even opened 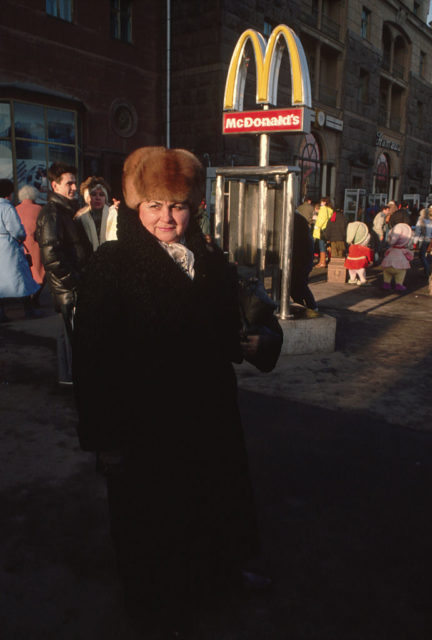 A Soviet woman standing in front of a McDonald’s sign prior to the opening of Russia’s first McDonald’s restaurant. 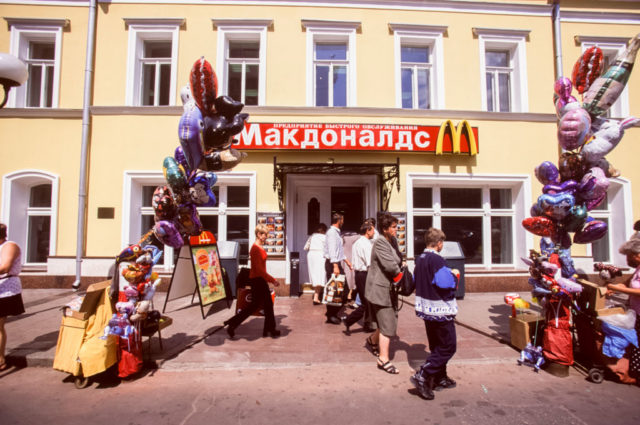 Customers wait outside the restaurant, eager to dig into a burger and fries.

600 workers were chosen to work in the restaurants 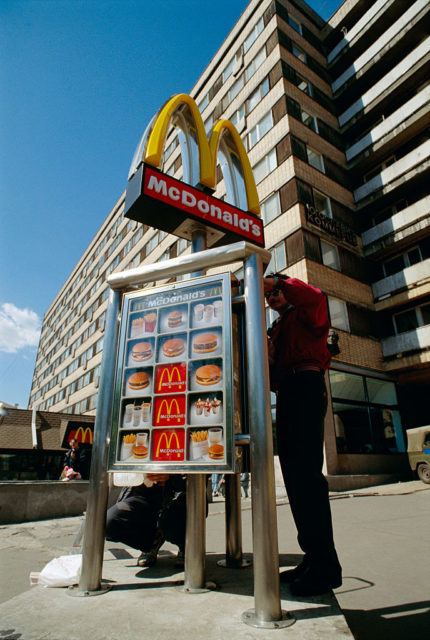 Workers install a sign for the new McDonald’s in Moscow, showcasing what the restaurant has on its menu.

At the time, it was the largest McDonald’s in the world 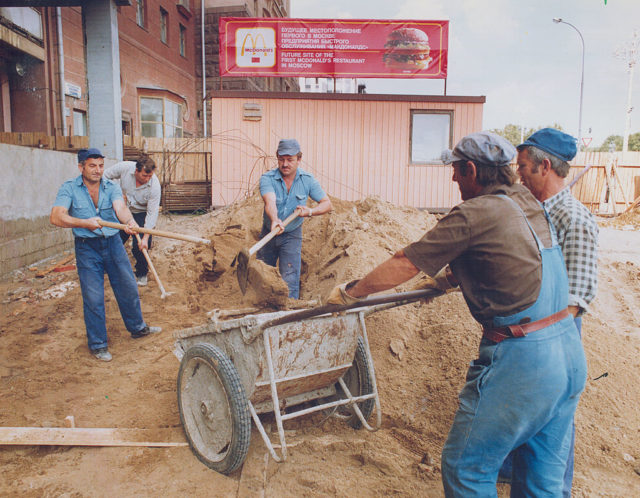 The first McDonald’s under construction in Pushkin Square. It was located just a few kilometers from Moscow’s Red Square.

It was a celebration, complete with performers 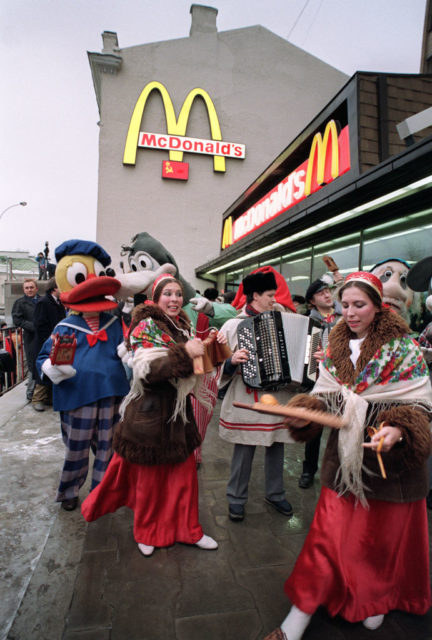 Soviet actors and musicians perform outside the first McDonald’s in the Soviet Union, marking the celebratory occasion. 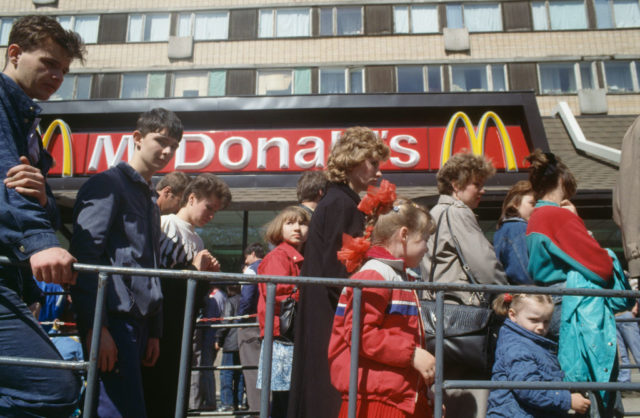 Patrons had to wait hours to just purchase a burger. Outside, eager customers patiently lined up for their turn.

People came from other cities to experience the Golden Arches 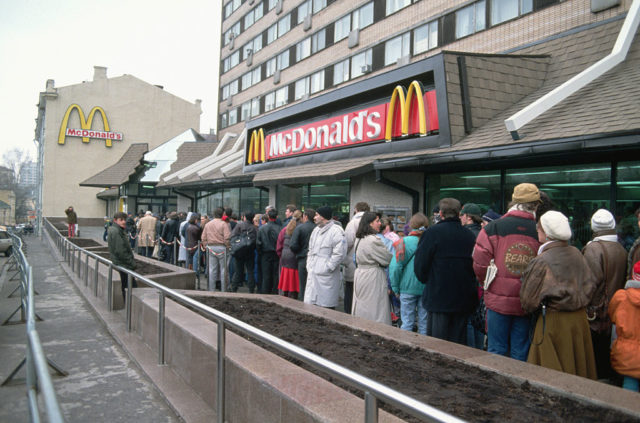 It wasn’t just locals who waited in line to purchase a meal. People from other cities made a trip to the restaurant.

A cardboard cutout of President Mikhail Gorbachev made a visit 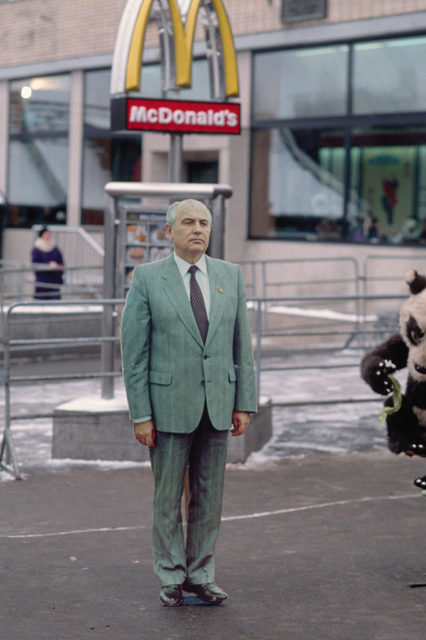 A photographic prop of Soviet Leader Mikhail Gorbachev in front of McDonald’s.

An American journalist declared the first Russian McDonald’s customers “had seen the future, and it works, at least as far as their digestive tract” 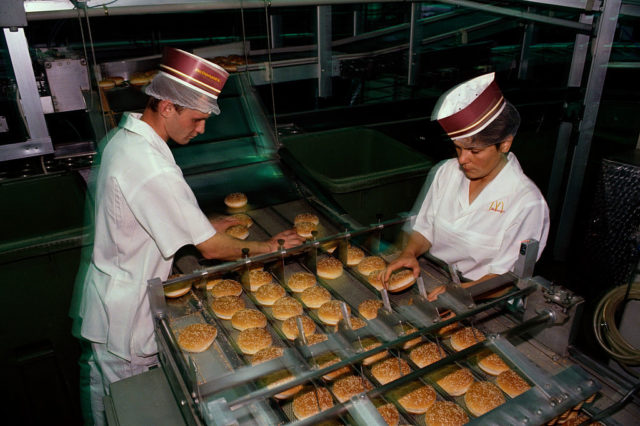 A behind-the-scenes look at two McDonald’s employees in Moscow making buns for burgers. 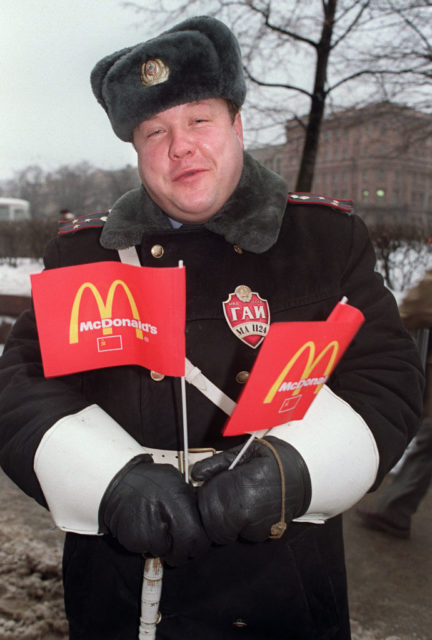 A customer of the just-opened first McDonald’s in the Soviet Union holds little flags of the US fast-food enterprise. Just one Bolshoi Mak cost the average citizen the price of a monthly metro pass!

McDonald’s advertised the new restaurant with the slogan: “If you can’t go to America, come to McDonald’s in Moscow” 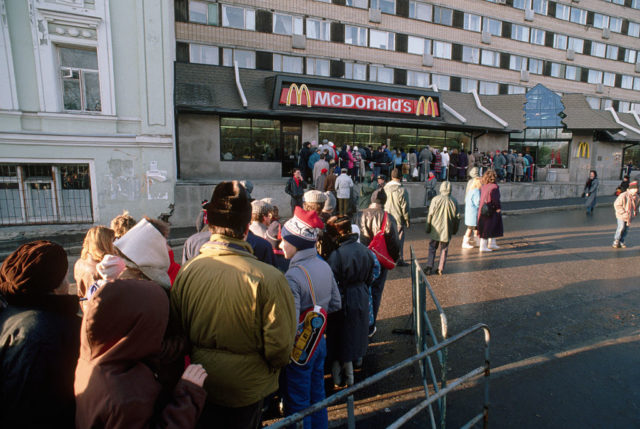 A long line of Soviet citizens waiting to enter the newly-opened McDonald’s on Gorky Street in Moscow.

The opening had been in the works since 1976 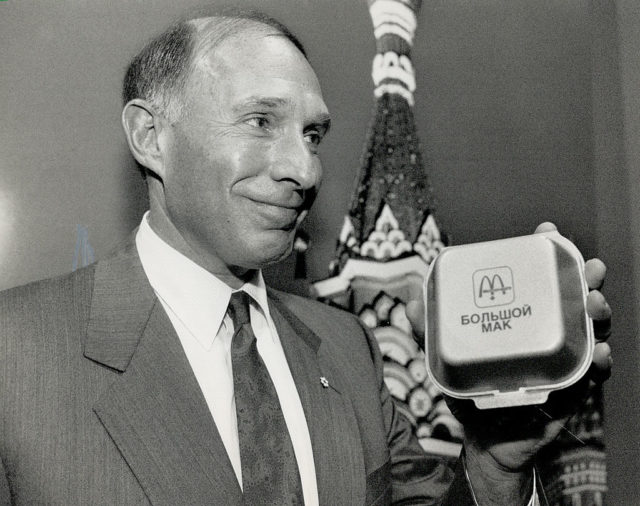 McDonald’s of Canada Chief Executive George Cohon shows off packaging for the Bolshoi Mak a year before the first restaurant in Russia officially opened.

The restaurant served 30,000 people on its opening day 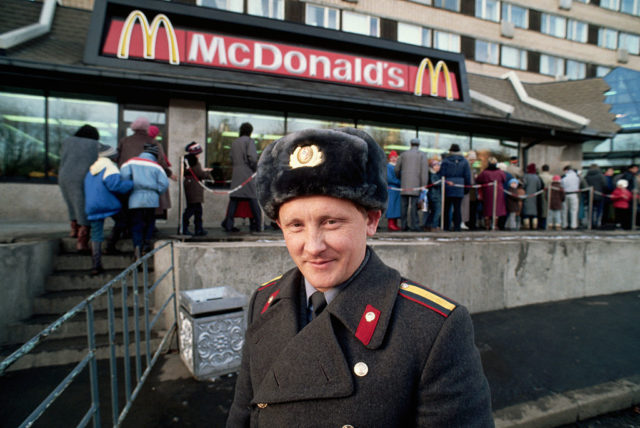 A Soviet policeman stands by a line of people waiting to enter the newly-opened McDonald’s. Crowd control was needed to ensure things didn’t get out of hand.

Boris Yeltsin was a fan 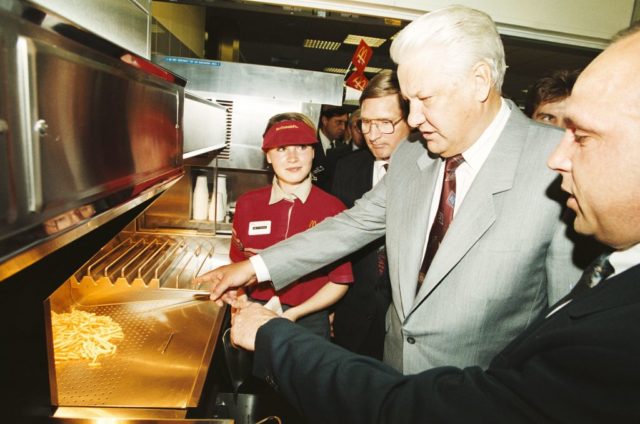 Russian President Boris Yeltsin checking out the kitchen during the opening ceremony of the second McDonald’s restaurant in 1993. 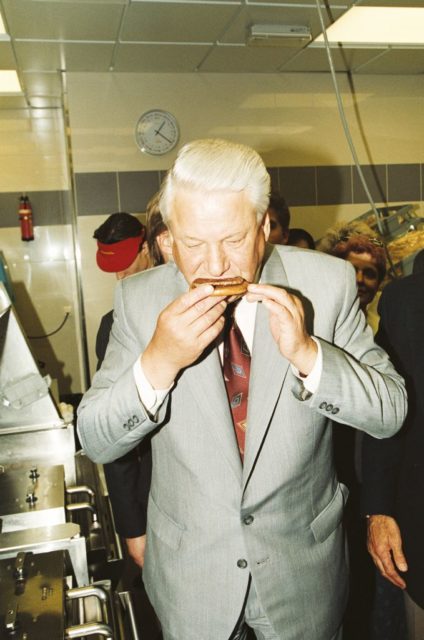 Boris Yeltsin eating a McDonald’s burger. It looks like he enjoyed it! 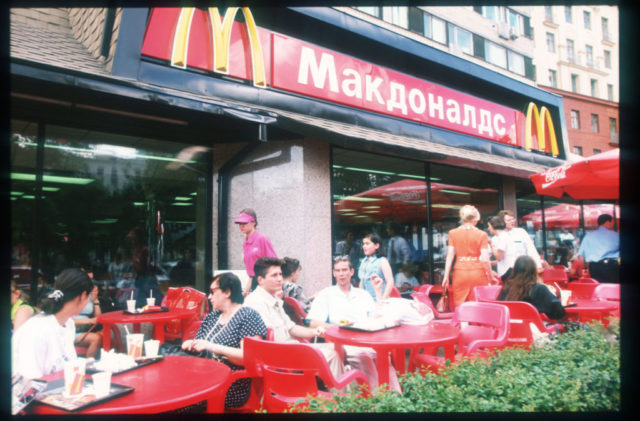 Russians eating outdoors at a McDonald’s in Moscow.

Those Golden Arches are universal! 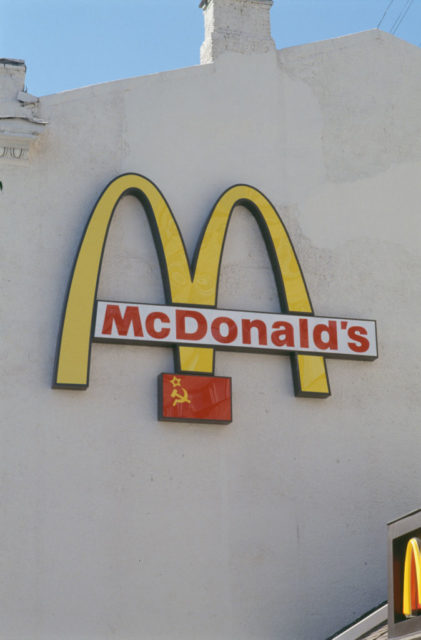 Close-up photo of a McDonald’s sign on opening day. Note the Soviet flag beneath the Golden Arches. 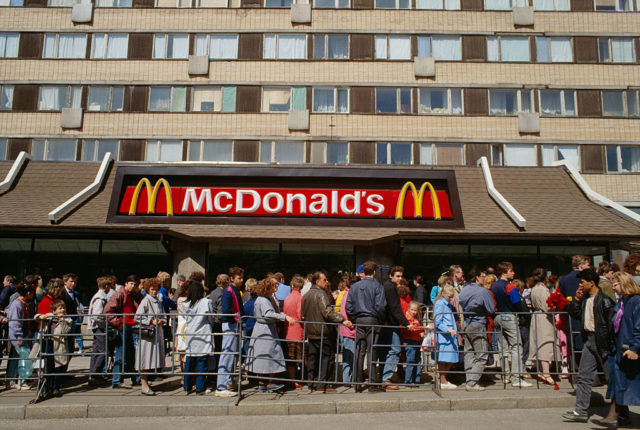 Another view of the line outside the restaurant on its opening day.

There are celebrations on the anniversary of its 1990 opening! 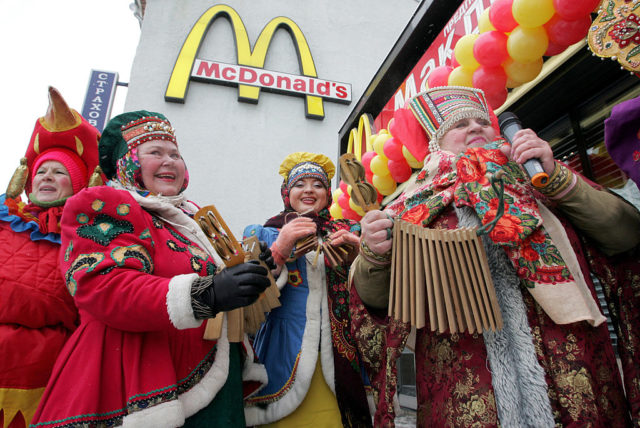 More from us: The Controversial History of the McDonald’s Happy Meal

Here are some traditionally-dressed Russian musicians performing in front of the busiest McDonald’s restaurant in the world, in Moscow’s Pushkin Square, during the 15th anniversary of the first opening of the restaurant in Russia.

« A Century Later, the Mystery of ‘Lady Bluebeard’ Is Still Unsolved
Princess Mary Crowdfunded Gifts for Soldiers Fighting on the Western Front During WWI »