The Uber-secret ‘Bohemian Club’ located in Sonoma County, California, has been around since 1872. However, throughout its entire 150-year tenure, no one has really known what goes on at the Bohemian Club each June and July. Rumors about robed figures and ritualistic ceremonies run rampant. It doesn’t help that five United States presidents have been members of the club. Here, we break down all the secretive history associated with this infamous old-boys’ club.

A brief history of the club 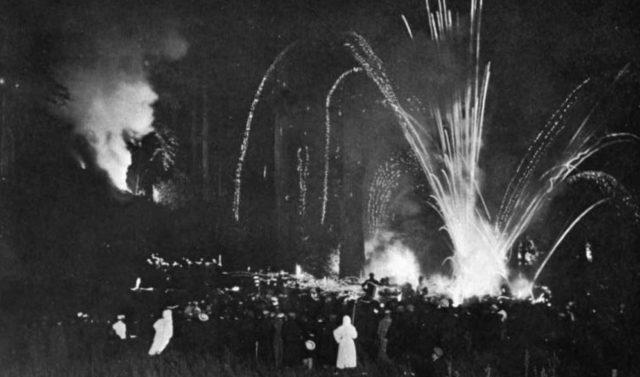 The Bohemian Club was first founded in San Fransisco in 1872  by a group of men interested in arts and culture. When the club was first founded, the term “bohemian” was meant to indicate cultured intellectuals. Today, the club is primarily known for its seemingly cultish rituals – the most famous being the Cremation of Care ritual.

The Bohemian Club retreat is located in Sonoma County, California, at Bohemian Grove. The club’s annual trip to Sonoma began in 1878. Each year in mid-July, members of the Bohemian Club gather for a two-week “retreat” of sorts. Any camp member can bring guests to the Grove for the “Spring Jinks” in June or the main two-week encampment in July. 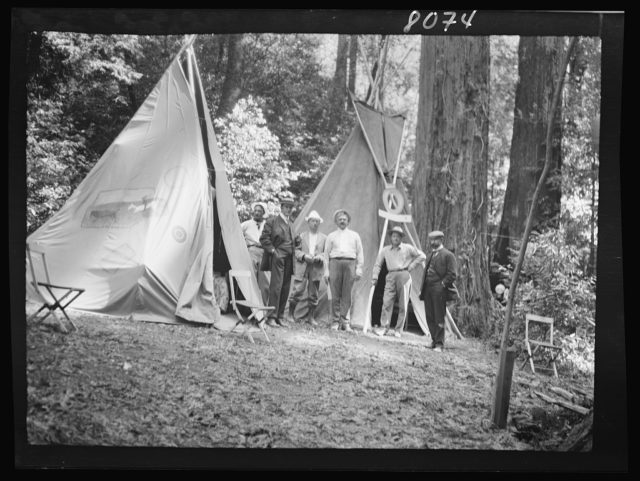 Members of the Bohemian Club in front of their tents at the Grove, circa 1896-1911. (Photo Credit: Genthe photograph collection/ Library of Congress/ Prints and Photographs Division)

The Bohemian Club is essentially an old boys’ club made up of around 2,500 members. The initiation fee costs $25,000. The club comprises some of the most powerful men in the world. It features prominent business leaders, senior media executives, government officials, and former American presidents. Women and children may visit the club during the day, but must leave its premise by the evening.

Ronald Reagan, Richard Nixon, Herbert Hoover, George H.W. Bush, and Dwight D. Eisenhower were all active members of the club. Like most old boys’ clubs, the Bohemian Club also has its fair share of honorary members. President Theodore Roosevelt was granted (and accepted) an honorary membership but didn’t attend any events. 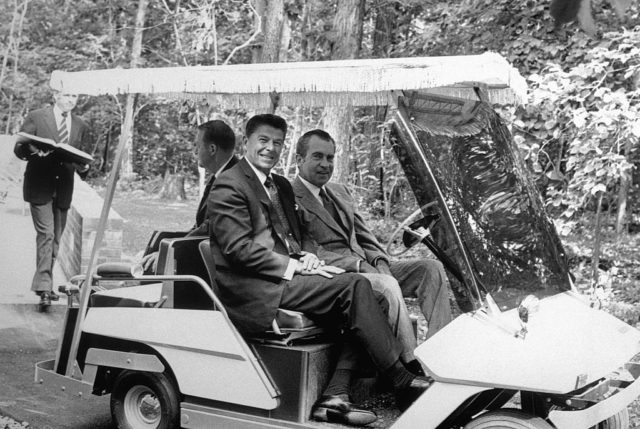 Both Ronald Reagan and Richard Nixon were active club members. In July 1967, Nixon allegedly delivered a lakeside speech at the Grove where he outlined his ideas on foreign policy. According to Professor G. William Domhoff, during this 1967 retreat, Nixon got verbal confirmation from fellow guest Ronald Reagan, who assured Nixon he would not be running for president in the upcoming election. This verbal promise was later confirmed by Ronald Reagan himself in Philip Weiss’s Spy Magazine expose on the Bohemian Club. Weiss had made some small talk with Reagan at the Grove, and Reagan had confirmed these rumors.

Despite being the president of the United States in 1971, Richard Nixon was adamant about giving a lakeside talk during the club’s July retreat. The press soon learned that Nixon was planning on making a speech. According to Domhoff, the public was not about to let the sitting president of the United States make an off-the-record speech to some of the most powerful men in the country. 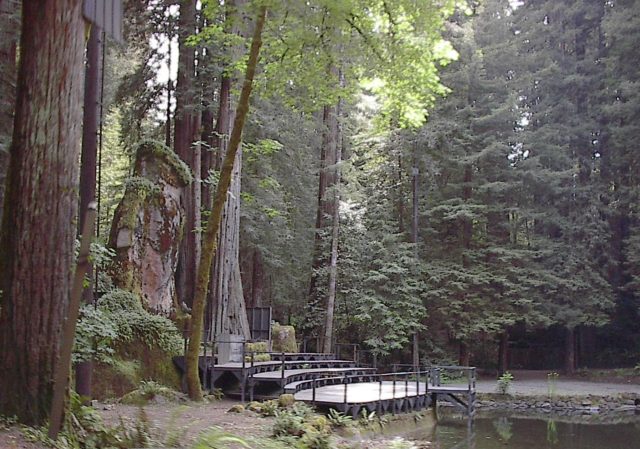 The Bohemian Club was extremely embarrassed and eventually asked Nixon to cancel his appearance at the Grove. Although there seemed to be no bad blood between the president and the club, the Watergate tapes revealed that Nixon may have mixed feelings. He can be heard calling the Bohemian Club derogatory names on the tapes.

After Richard Nixon’s 1971 fiasco, all future presidents avoided the club while campaigning. In the 1970s, Ronald Reagan belonged to the Owl’s Nest Camp, but during the 1980 presidential election, Reagan opted to stay away from the camp.

In 1980, Reagan wrote a letter to retired three-star Marine Corps general Victor Krulak. The two were old friends and Bohemian Grove campmates. The letter read: “I missed being at the Grove very much. There is one this to be said about this contest I’m in – win or lose, either way, I’m going to be able to get back to Owl’s Nest next year. I had fully intended to be there until, after the nomination, I discovered I might be an embarrassment to our fellow Bohemians because of the round-the-clock surveillance by the press. They camp down my driveway these days.”

So what does happen at the camp? 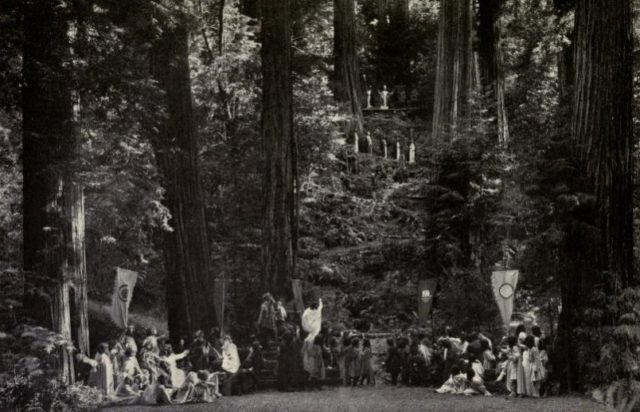 Because the Bohemian Club has been around for so long and has remained so secretive, it is easy to imagine that these retreats are full of controlled, cultish ceremonies. In reality, it seems that the Bohemian Club is a chance for some powerful individuals to let off steam with their friends, and nothing ever gets too wild.

The Club’s motto is “Weaving Spiders Come Not Here,” presumably meaning that business is to be left out of the Grove. The most famous ritual at the camp is the Cremation of Care Ritual. This is a theatrical production on the first night of the encampment in front of a 40-foot Owl Shrine. A spokesperson for the Bohemian Grove called the ceremony “a traditional musical drama celebrating nature and summertime.” 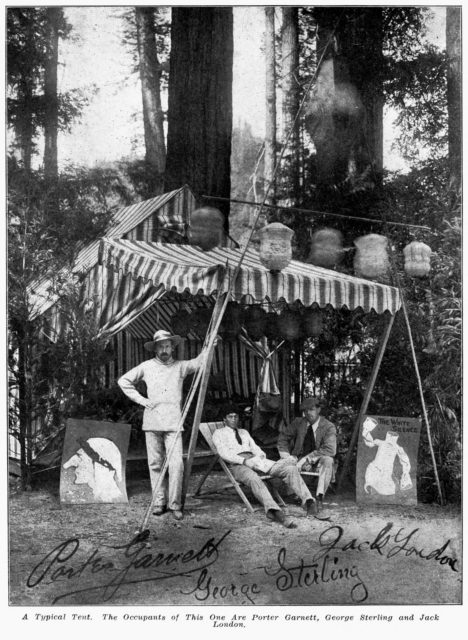 The club and its activities almost always attract attention and protests, primarily due to the high-ranking members giving unofficial talks. As activist and local resident Mary Moore put it in 2011, “they’re discussing public policy behind closed doors, with no way of us hearing about it… there needs to be public scrutiny.”

According to Sophie Weiner, who had a summer job at the Grove, club members would wander between the many camps at the Grove, getting progressively drunker, and tended to relieve themselves on trees.

More from us: Inside the Hells Angels: 5 Notorious Facts About the Infamous Biker Club

Ultimately, despite its secrecy, the Bohemian Grove is a place where camp members can be themselves, get drunk, and engage in behavior they probably wouldn’t be allowed to do out in the real world. Despite its reputation, the Bohemian Club really just seems to be a place where powerful men can hang out with their friends once a year.