Over two decades ago, David Fincher’s cult classic movie Fight Club (1999) made it into cinemas. It was initially a box office disappointment, but it eventually garnered a dedicated DVD following.

While Brad Pitt and Edward Norton gave brilliant lead performances, many remember Meat Loaf’s minor but critical role as Robert Paulson. When interviewed in 2016, Meat Loaf revealed that Fight Club was one of his favorite films.

Check out some facts below about this film, such as which line was cut only to be replaced by a more controversial one and why Meat Loaf required two fat suits.

The idea for the original novel came from a camping trip

When Chuck Palahniuk was away camping with friends, he approached another set of campers to complain about how loud their radio was and received a beating for his trouble. When he got back to work, nobody mentioned or acknowledged his injuries. This “societal blocking” was the starting point for the book. 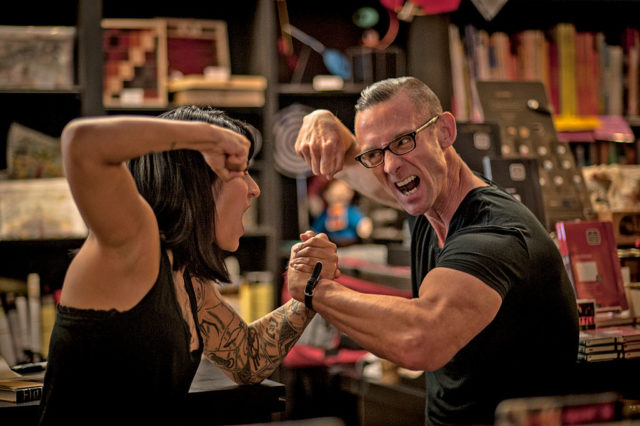 Palahniuk is quoted by Screenrant as saying: “I realised that if you look bad enough, people would not want to know what you did in your spare time. They don’t want to know the bad things about you. And the key was to look so bad that no one would ever, ever ask.”

Other bits of the film, such as erasing videotapes with magnets, visiting support groups for the terminally ill, and inserting single frames of adult films into children’s movies, were based on stories his friends told him about or had done themselves.

Edward Norton has no name

Norton’s character is just credited as ‘Narrator.’ Although the character sometimes calls himself ‘Jack,’ this is only when he’s satirizing entries from the magazine Annotated Reader. However, in the DVD and Blu-Ray commentary, Edward Norton revealed that he often referred to the character as Jack.

Depending on which source you read, Brad Pitt either had a cap removed from his chipped tooth to give him a more rugged, Durden look, or he actually paid to have his teeth deliberately chipped to be more in-character. With a paycheck of $17.5 million (against Norton’s payment of $2.5 million), it can be assumed that Pitt had no problem with the cost of getting his teeth made perfect again afterward. 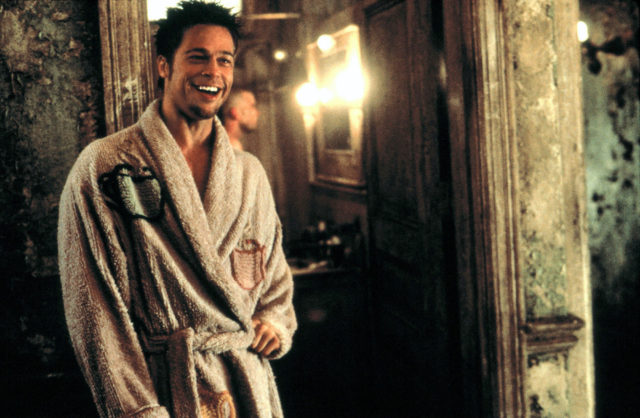 Helena Bonham Carter insisted that her makeup artist apply Marla’s makeup with her left hand as she didn’t believe that Marla was the type of person who would be very careful in her appearance.

Not one but two fat suits filled with birdseed

To give him the physique of the character he was playing, Meat Loaf had to wear shoes to give him an extra eight inches in height and also a 100-pound fat harness to change his body shape. The suit was filled with birdseed so that his love handles and breasts hung in a realistic manner. The suit was so heavy that the actor required an oxygen mask after his fight scenes. 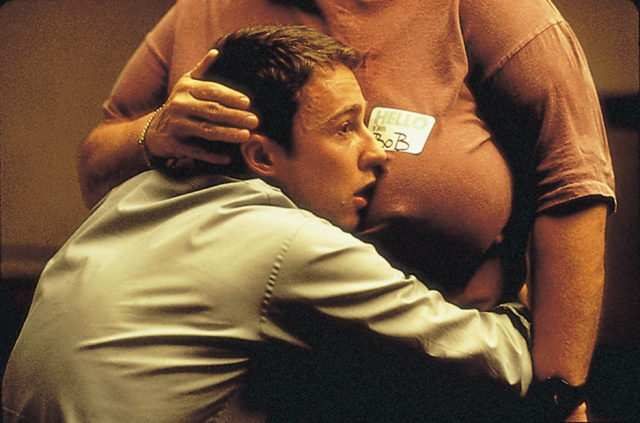 Furthermore, the crew had to make two suits: one with nipples, one without, because they weren’t sure that Fox would agree to a suit that had prominent nipples.

Starbucks can take a joke – up to a point

In an interview with Empire, David Fincher claimed that he’d ensured there was a Starbucks cup in every shot. While Starbucks was willing to take that joke on the nose, they weren’t so keen on having one of their buildings destroyed, so when a giant globe rolls off its stand and crashes into a coffee shop, the shop is named ‘Gratifico Coffee.’

According to IMDb, the video store was originally a Blockbuster store, and Annotated Reader magazine was a reference to Reader’s Digest which really did have stories about a man’s body (called Joe) written by J. T. Ratcliffe. All these names were changed at the request of the who “did not want such product placements in light of the film’s content.”

Careful shooting required so as not to spoil the twist

It was crucial to the filmmakers to maintain the central secret of the film until the big reveal. That said, there are a lot of hints to the twist once you know what to look for. 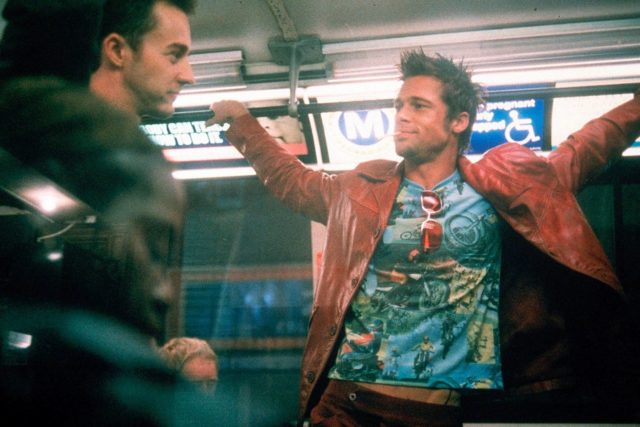 For example, the Narrator reacts whenever Durden gets punched, and when an extra on the bus pushes past them both, he only says ‘Excuse me’ to Norton’s character. In addition, Durden is never seen in over-the-shoulder shots or “two shots” in group scenes.

A Fox executive was outraged by several scenes from the movie

Laura Ziskin, President of Production at Fox 2000 Pictures, watched the original cut of Fight Club and objected to a scene where Marla says: “I want to have your abortion.” She insisted it was cut. Fincher acquiesced on the condition that she would not take out whatever new line he put in. When he replaced it with the infamous “grade school” line, Ziskin was outraged and insisted that the original line be put back in. Fincher refused.

She also disliked the scene where Tyler emerges from having sex with Marla and is wearing a rubber glove – an addition that Pitt had thought up himself. However, when it got the biggest laugh of the movie at the test screening, she was forced to admit it could stay in.

In a 2016 interview with The AV Club, Meat Loaf described how he would sit behind director David Fincher during most of the day so he could see what was going on. He explained how his presence prompted an unusual request from the director: 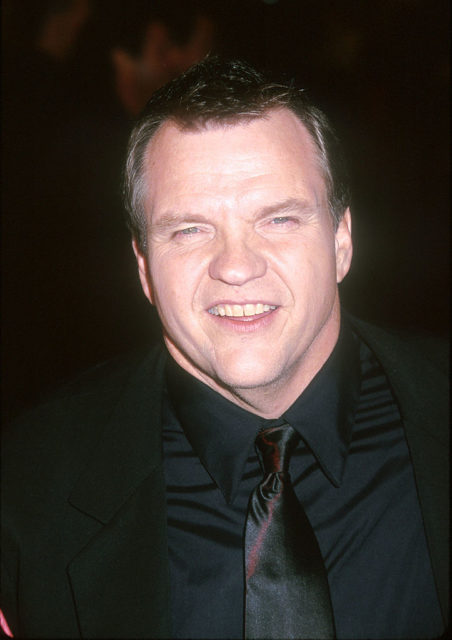 “It got to the point, about four or five months into filming, that we’d break for lunch, and Fincher would call me into his trailer and say, ‘I want you to help me pick which one I should use.’… The first time he did that, I said, ‘I can’t do that,’ and he goes, ‘Yeah, you can. You’ve been sitting next to me, so help me pick out the best one.’”

While the movie has many controversial elements, there are some details that were changed to avoid lawsuits. According to Ranker, all of the buildings that are blown up at the end are buildings owned by Fox that have been digitally composited into the shot. The filmmakers didn’t want to upset real credit card companies by blowing up representations of their buildings.

However, when it comes to the Narrator’s apartment, which is blown up at the start of the movie, the layout matched that of an apartment that David Fincher once lived in. Apparently, when living there, he’d always wanted to blow it up.

The actors learned to make soap as much as fight

As well as learning boxing, taekwondo, and general grappling skills, according to Mental Floss, Pitt and Norton were taught the basics of soap making from a boutique company called Auntie Godmother. 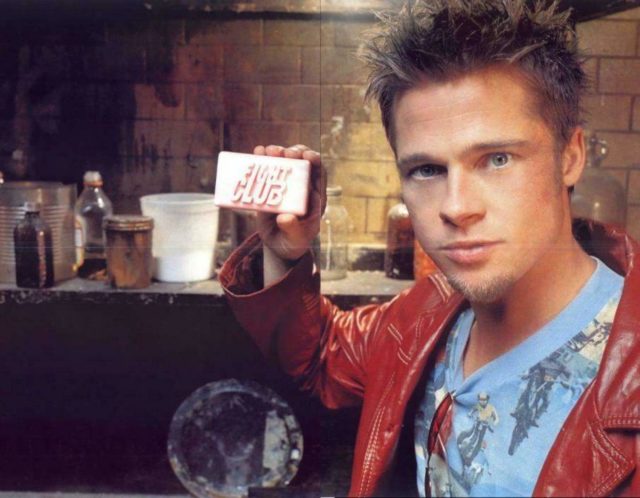 Incidentally, the soap-making company is named the Paper Street Soap Company. A “paper street” is a street that is included on maps but has never been built. This can be a planning mistake or it might be a copyright trap by the map publisher.

One element from the book that was changed for the film was the section where Durden dictates recipes for homemade explosives. The speech was changed for safety reasons, and fake recipes were used.

Although author Palahniuk liked the film, even going so far as to say that he thought it was an improvement on his novel, Fight Club evoked a very mixed reception.

Its debut happened at the Venice Film Festival. A book entitled Best. Movie. Year. Ever. by Brian Raftery quotes Pitt as saying that while the man who ran the festival walked out of the cinema, “Edward and I were still the only ones laughing. You could hear two idiots up in the balcony cackling through the whole thing.” 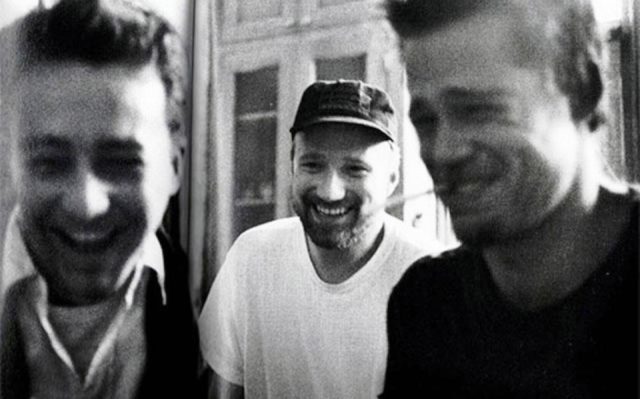 Having seen the movie, Rosie O’Donnell went onto her show to say that it was truly awful and she hadn’t slept since she’d seen it. She gave out an “unforgivable” spoiler to her viewers and encouraged them not to see it.

His name is Robert Paulson

When Meat Loaf died on January 20, 2022, many fans honored him by posting a simple message on Twitter: His name is Robert Paulson. This is lifted straight from Fight Club when Meatloaf’s character, Robert “Bob” Paulson, dies. The rules of Fight Club are that when you join, you become an anonymous soldier in Durden’s army. But when the Narrator finds out about Bob’s death, he gets angry at the lack of respect shown. He forcefully reminds the other soldiers that this man had a name and a family, to which the others chant: “His name was Robert Paulson.”

I don’t keep pictures from films around home. But I have this one in my office in a frame bc it makes me smile every time. It’s engraved ‘Love and Hugs, Meat’ it sums him up well. He was so funny. And gentle. And warm to everyone. A sweet soul. RIP Meat Loaf pic.twitter.com/aMrIgXByEc

In response to the death of the rock star, Norton put out a heartfelt tweet that read:

“I don’t keep pictures from films around home. But I have this one in my office in a frame bc it makes me smile every time. It’s engraved ‘Love and hugs, Meat’ it sums him up well. He was so funny. And gentle. And warm to everyone. A sweet soul. RIP Meat Loaf.”

« 2,000-Year-Old Skull Shows Evidence of Ancient Surgery
11 ‘Then and Now’ Pictures That Prove Not Much Has Changed in the World »