Many modern couples choose to do away with tradition on their wedding day. From one-year-old wedding cake to wearing someone else’s underwear, we’re glad to leave these historic wedding traditions at the altar!

Wearing anything but white 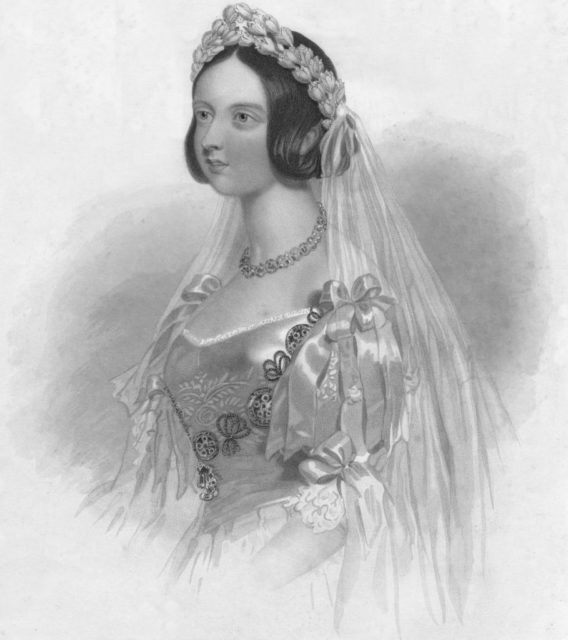 Believe it or not,  wearing a white wedding dress on your big day is a relatively new matrimonial tradition. Throughout history, brides chose to wear any color for their wedding, especially if they could not afford a dress just for the occasion. Instead, a wedding dress could be made out of the fanciest and most expensive dress in your closet, or dresses were purchased with the intention of re-wearing them for other special occasions.

It wasn’t until the ultimate trendsetter Queen Victoria donned a white lace gown for her marriage to Prince Albert in 1840. She chose the color to accent the beautiful details of Honiton lace, which she purchased to support the struggling British lace business. The Queen must have looked so stunning in white that it became an international trend – and is now a tradition for many brides.

Freezing your wedding cake for your firstborn 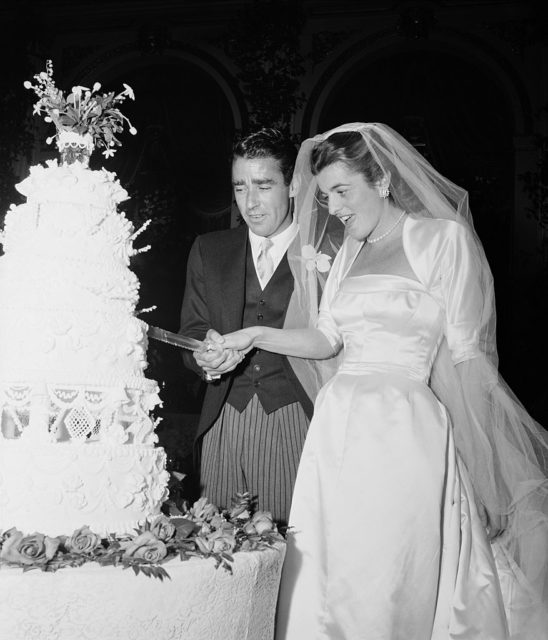 When it comes to being thrifty for your wedding, you can have your cake and eat it too – in a year or so! Opulent, multi-teared wedding cakes are still a tradition at many weddings, but they can also be expensive. Once you factor in that many brides became new mothers within one to two years of marriage, freezing the top tear of your wedding cake to serve at your firstborn’s christening makes sense.

Some modern brides opt to save their cake to enjoy on their first anniversary, while others don’t bother with a huge cake no one will eat! Many couples also chose to ditch this tradition since modern wedding cakes don’t hold up as well as your grandmother’s rum-soaked fruitcake did.

Matching with your bridesmaids 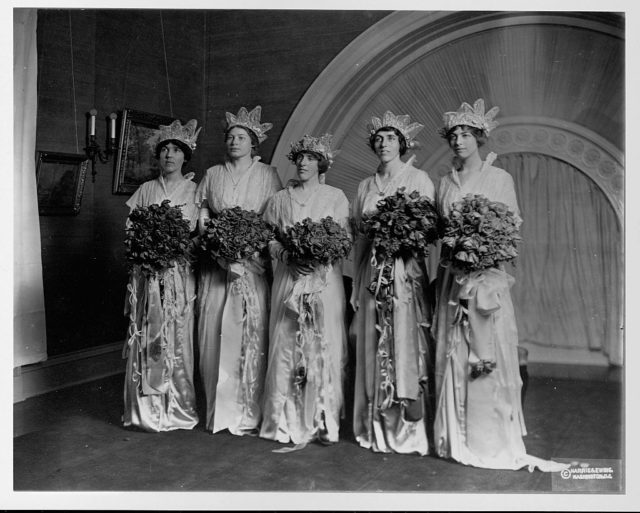 Nowadays, bridesmaids are friends and family of the bride who have two responsibilities: help the bride, but don’t upstage her. However, in ancient times bridesmaids purposely dressed the same as the bride to confuse evil spirits and potential jealous wedding hijackers.

Carrying the bride across the threshold 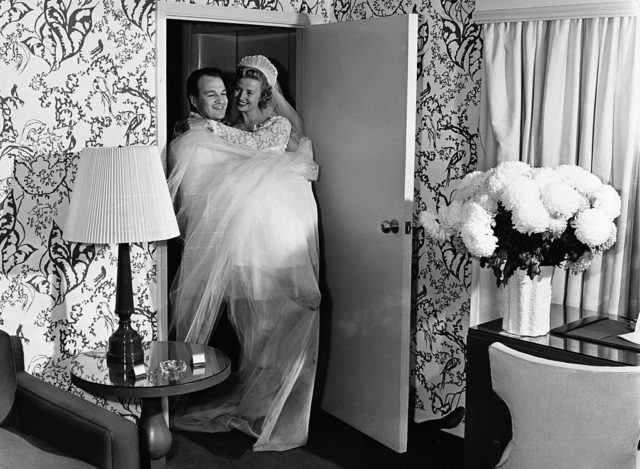 A newly married man carries his bride over the threshold of their new home. (Photo Credit: Hulton-Deutsch Collection/Corbis via Getty Images)

Carrying the bride over the threshold as the newlyweds begin their life together always sweeps hopeless romantics off their feet – but the origins of this tradition are anything but heartwarming.

This custom comes from Ancient Rome, where many believed that thresholds were a popular spot for evil spirits to attach to their feet and enter the home. To avoid any evil incidents on the wedding night, the groom would carry the bride over the threshold so no demons could latch onto her feet!

Cleaning up after your guests (Polterabend) 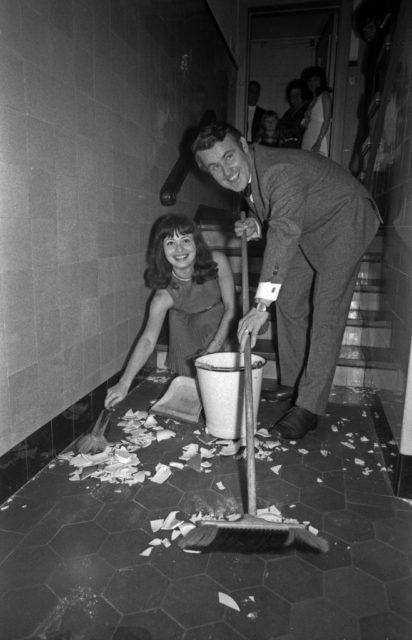 A bride and groom sweep up broken dishes as part of the German Polterabend tradition. (Photo Credit: Schweigmann/United Archives via Getty Images)

Most newlyweds can think of a million things they’d rather do on their wedding day to avoid cleaning up after their guests – but in Germany tidying up can be a great way to start married life! The tradition known as Polterabend (German for bachelor party) takes place the evening before the wedding. Party-goers take turns smashing everything from ceramic tiles and plates to toilets to represent the transition from bachelorhood to married life.

Once all the smashing is done, the bride and groom have to work together to sweep the floor and discard the broken shards – a symbol of conquering challenges in their marriage. The Germans also believe “Scherben bringen Glück” or “shards bring luck” to the couple!

Keeping one foot on the floor 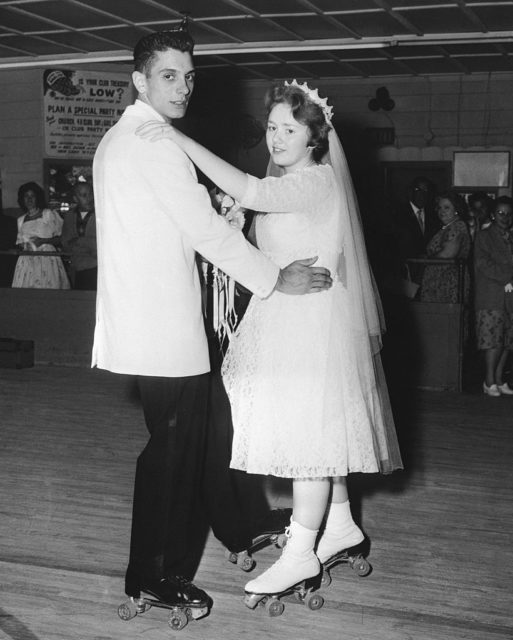 This Irish tradition claims that the bride must keep one foot on the floor to keep fairies and evil spirits from stealing the bride away.

Putting the B-O in Bouquet 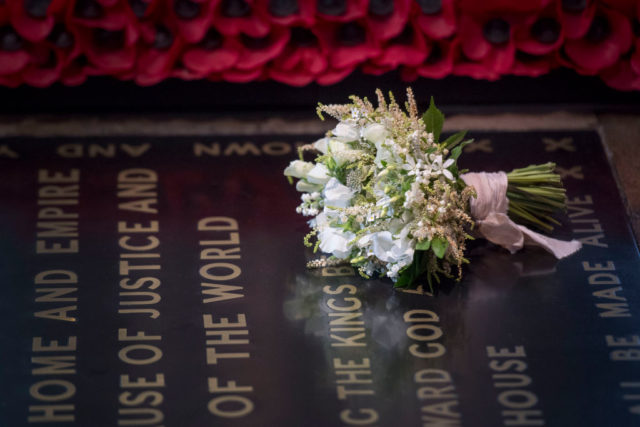 The bouquet of flowers carried by Meghan Markle during her wedding to Prince Harry is pictured laid on the grave of the Unknown Warrior inside Westminster Abbey. (Photo Credit: Victoria Jones/Pool/AFP via Getty Images).

The tradition of a wedding bouquet, especially one filled with fragrant-smelling flowers, first began in Medieval Europe. Medieval weddings, just like the rest of Medieval life, were filled with unpleasant and unhygienic smells. Even the bride had little-to-no access to baths or laundry facilities.

Instead, medieval brides carried bunches of fragrant roses and herbs like chamomile and rosemary to distract the groom from any unpleasant odors. Sheaths of wheat were also sometimes carried to represent fertility and abundance.

Being pelted with rice 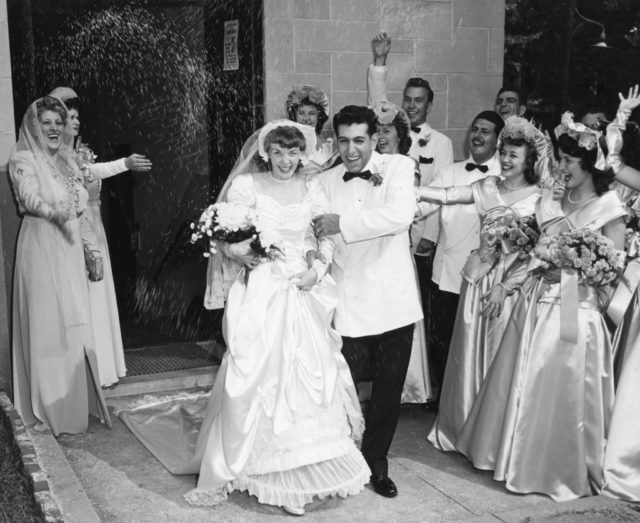 Newlyweds laugh as they pass under a traditional shower of rice, thrown by wellwishers, circa 1950. (Photo Credit: Smith/Department of State/PhotoQuest/Getty Images).

Before a widespread misconception that rice can kill birds, throwing rice at the newlywed couple was a popular wedding tradition. Rice is a symbol of good fortune and fertility and was a great way to send the bride and groom off to married life.

Today, many people opt to throw flower petals, plant seeds, and bubbles for a more eco-friendly and low maintenance send-0ff.

No weddings on a weekend 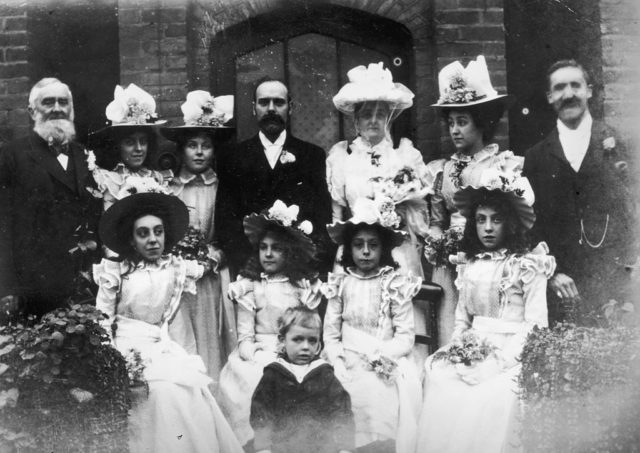 Today, many weddings are held on weekends – a necessity if your guests are traveling or expecting to take advantage of the free drinks. Traditionally, weddings on Saturdays were frowned upon. The White House Book of Etiquette, which has rules for anything you could think of, used this rhyme to help brides pick the appropriate day for their nuptials:

“Mondays are for wealth, Tuesday for health, Wednesday best day of all, Thursday for losses, Friday for crosses, Saturday no luck at all.”

A sixpence in your shoe 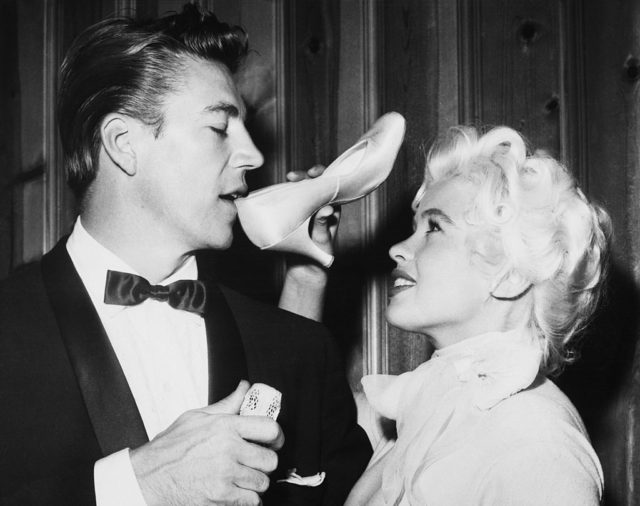 We all know the old wives’ tale that claims a bride needs “something old, something new, something borrowed, and something blue” – but the tradition as we know it is missing a very important piece: “and a sixpence in her shoe.” In Victorian England, many brides placed a sixpence in their shoes to represent wealth and good fortune in their marriage.

While most brides have ditched the sixpence part of the rhyme, securing some extra wealth for the newlyweds is as good as reason as ever to bring it back!

More from us: Queen Elizabeth II Purchased Her Wedding Dress with Ration Coupons 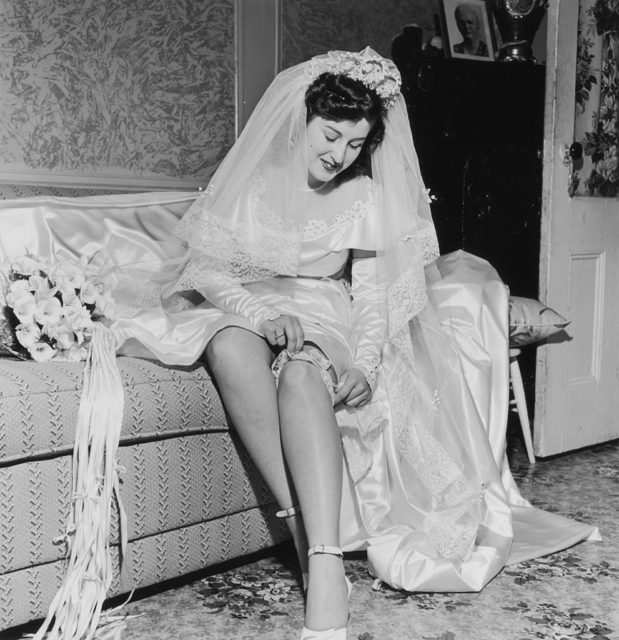 A bride pulls on her garter before her wedding ceremony, circa 1945. (Photo Credit: Hulton Archive/Getty Images)

Speaking of something borrowed – this tradition might be taking the expression a bit too far. English brides were encouraged to wear another woman’s underwear for their big day. So long as the underwear belonged to someone who was already a mother, this tradition helped the new bride to bear children.