Seven Of The Worst Years in The History Of Mankind

Many people think the 2020s are about as bad as it could get. However, we believe these years were even worse… 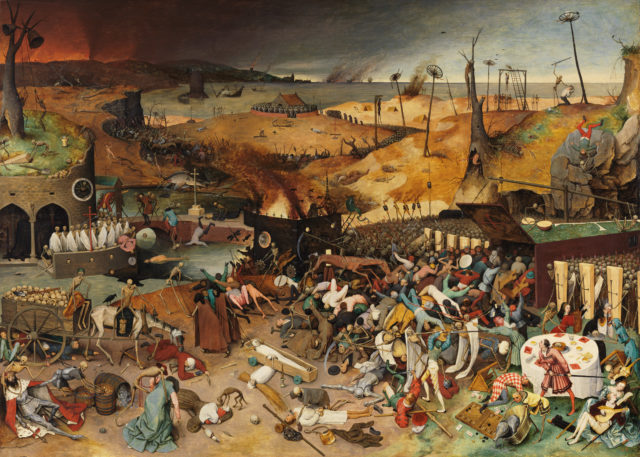 “The Triumph of Death” (c. 1562) by Pieter Bruegel the Elder depicts the dark skies and horrific plague of 536 to 549 AD. (Photo Credit: Museo del Prado via. Wikimedia Commons/Public Domain).

The Dark Ages were truly a dark time in more ways than one. When a mysterious fog arrived in 536 AD that covered the sun for 18 months, no one could have predicted how dark things could truly get. A volcanic eruption in Iceland created a massive cloud of ash that blocked out the sun for all of Europe, the Middle East, and some parts of Asia.

The lack of sunlight made it too cold for crops to grow, triggering a massive famine that killed thousands. To make matters worse, the first Bubonic plague began in 541 AD and lasted another eight years. The plague, known as the Plague of Justinian, killed an estimated 50 to 100 million people – more than half the world’s population.

It’s no surprise that historians often refer to 536 AD as the “worst year to be alive.” 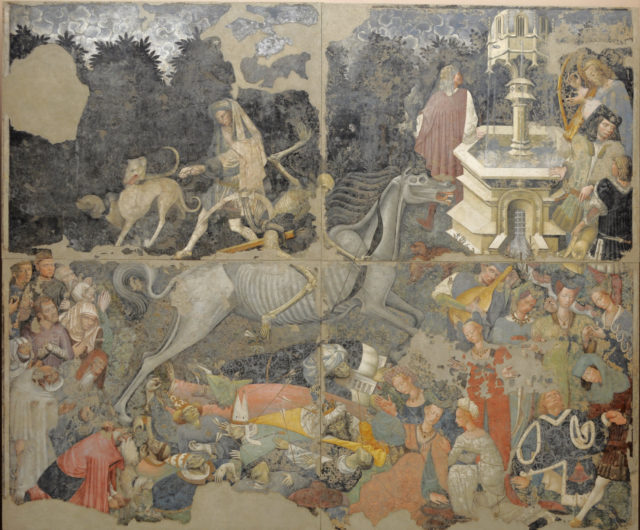 While England is known for its rainy weather, the worst rainfall in the history of the United Kingdom lasted for six months straight! The rain began in the summer of 1314 and it did not stop until the fall. Even after six months of constant flooding, the rain and harsh winters continued throughout 1315 and 1316 – triggering a massive famine that even left the King and his court without bread to eat.

Historians have even found shocking stories of theft, murder, and even cannibalism as both peasants and nobles struggled to survive the famine. Finally, the weather returned to somewhat-normal conditions in 1317, but it was only the beginning. The Great Flood of 1314 marked the end of the Medieval Warm Period and the start of the Little Ice Age, which lasted until 1860. 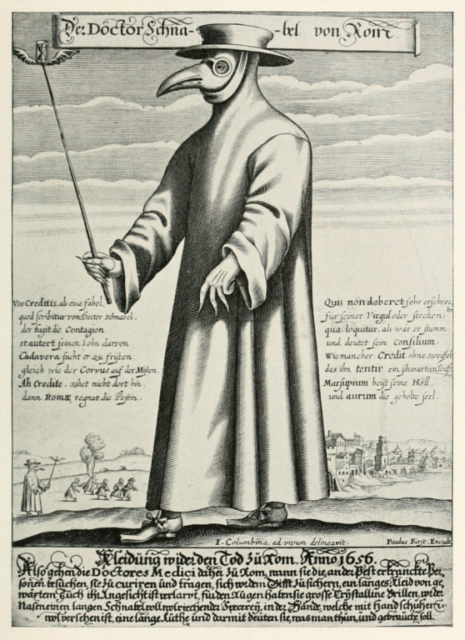 The first of two major Bubonic plague pandemics, the Black Death of 1347 was a truly horrifying period. The plague first arrived in Europe in 1347 when several ships docked at a harbor in Messina, Sicily. Onlookers boarded the ships and made a gruesome discovery: nearly everyone on board was dead, and those that weren’t yet were close to it.

The Black Death quickly spread throughout Europe, killing an estimated 20 million people – roughly one-third of Europe’s population. Writer and scholar Giovanni Boccaccio recorded his experience of the plague in Florence in 1348, he described families turning on each other and locking sick loved ones out of their homes to keep the Black Death away. 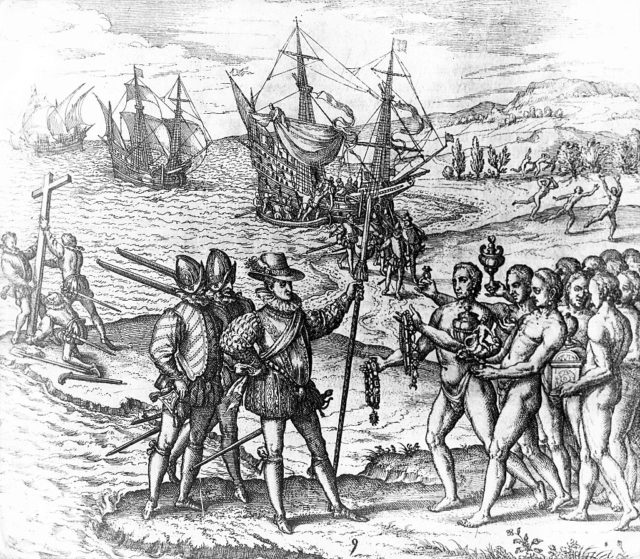 In 1492, Columbus sailed the ocean blue – and brought devastation to North America. When Columbus first set foot in North America, he brought with him a host of diseases the New World had never seen before. The many nations of Indigenous people who lived there for thousands of years had never been exposed to European illnesses like smallpox, diphtheria, measles, and of course the Bubonic plague.

Many historians believe that close to 90% of the population of Indigenous peoples in North America died from European illnesses in just 10 years. Columbus was also considered the father of the slave trade, taking thousands of slaves back to Europe during his travels. 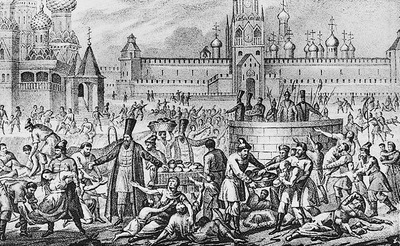 How could a volcanic eruption in Peru trigger the most devastating famine in Russian history? Historians believe that an eruption that occurred in 1600 at the Huaynapatina volcano in Peru launched between 16 and 32 million metric tons of volcanic ash and chemicals into the atmosphere, causing a “volcanic winter.”

While many people throughout Europe struggled to find enough to eat and furs to keep warm, Russia’s famine escalated when the price of grain doubled due to lack of food. During the two years of famine, over 127,000 bodies were buried in mass graves in Moscow alone. In total, Russia lost 30% of its population during the famine. 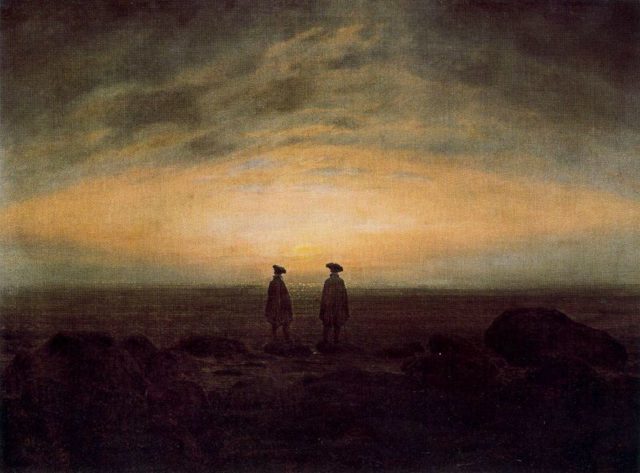 “Two Men by the Sea” by Caspar David Friedrich, circa 1817. The painting depicts the gloomy skies left from the volcanic winter of 1816. (Photo Credit: Alte Nationalgalerie via Wikimedia Commons/Public Domain).

In the summer of 1815, the largest volcanic eruption in history caused so much ash to leak into the atmosphere that the globe was plunged into some of the coldest temperatures on record. Crops failed due to the cold, and food shortages and cholera outbreaks plagued countries around the world.

Some people reported that lakes and rivers in Pennsylvania were frozen over in July, while New Englanders were hit with multiple ice storms. One Vermont farmer froze to death in a snowstorm in June 1816. His nephew claimed that before he left to check on his flock of sheep, he jokingly said:

“‘If I am not back in an hour, call the neighbors and start them after me. June is a bad month to get buried in the snow, especially when it gets so near July.’ … Three days later, searchers found him … frozen stiff.” 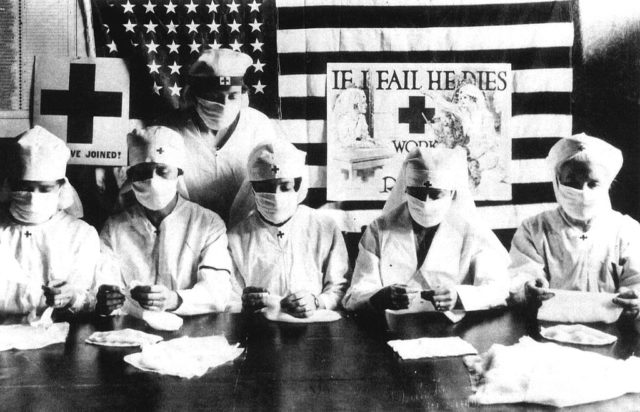 A century before Coronavirus would shut down the world in March, 2020 – the Spanish Flu pandemic changed life as we know it today. It is estimated that one-third of the global population contracted the Spanish Flu, and 50 million died worldwide.

More from us: 10 Incredible Ancient World Discoveries That Have Us Rethinking History

This time was marked by loss from the virus but also the insurmountable loss of life during World War One, where an estimated 20 million people died.