Adolfo Constanzo And His Bizarre Cult, the Narcosatanists

In April 1989, law enforcement discovered a gruesome scene during a drug investigation on a ranch in Mexico. Twelve males, many of whom had been brutally disfigured and were missing body parts, were buried in shallow graves on the property. Who was to blame for these murders? “The Godfather” Adolfo Constanzo and his cult, the Narcosatanists.

Adolfo Constanzo grew up in Miami, Florida. When he was still a teenager, he became heavily involved with both drug dealing and religion. He worked as a sorcerer’s apprentice and started practicing a religion called Palo Mayombe, which uses a nganga, an iron cauldron. Human and animal bones are placed in the nganga as well as sacrificial animal blood to complete the religious rituals. 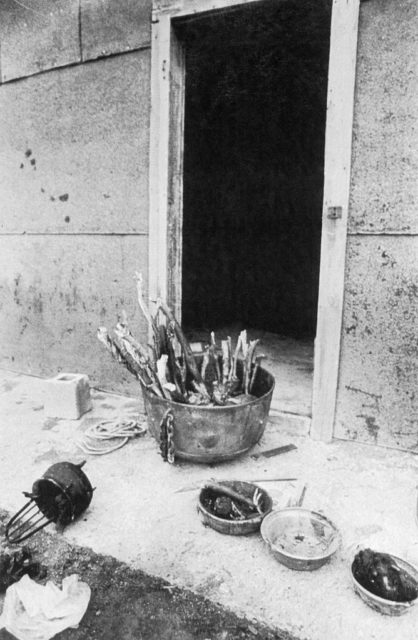 Constanzo’s nganga containing bones, a turtle shell, the head and claws of a rooster, a goat’s head and a horseshoe. (Photo Credit: Bettmann/ Getty Images)

When Constanzo moved to Mexico City in 1984, he began offering magic spells to the city’s elite and numerous drug cartels. He would perform these rituals with animals, many of them exotic, as well as human bones that he robbed from graves. He, along with a number of followers had obtained during his time there, began to think that the nganga would be more powerful if they started using live human sacrifices.

Outside of performing rituals for profit, Constanzo got involved in the drug business, working with a cartel called the Hernandez brothers. In 1988, Constanzo moved to Rancho Santa Elena, where he was able to both perform human sacrifices and store large quantities of drugs.

On the ranch, Constanzo was able to commit the heinous sacrifices that were used to protect himself and his cult members from the law. He believed that by performing these human sacrifices, he and his followers would not be punished by the law for their drug operations. 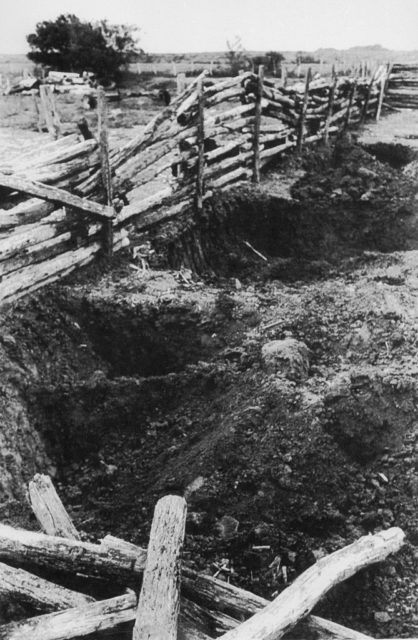 The murder of Mark Kilroy

The murder of Mark Kilroy is the most infamous that the cult performed. Mark Kilroy was an American pre-med student at the University of Texas. He went down to Matamoros, Mexico for his spring break in 1989 with three of his friends. They left their car on the US side of the border and walked across, with plans to walk back across when they were ready to leave. 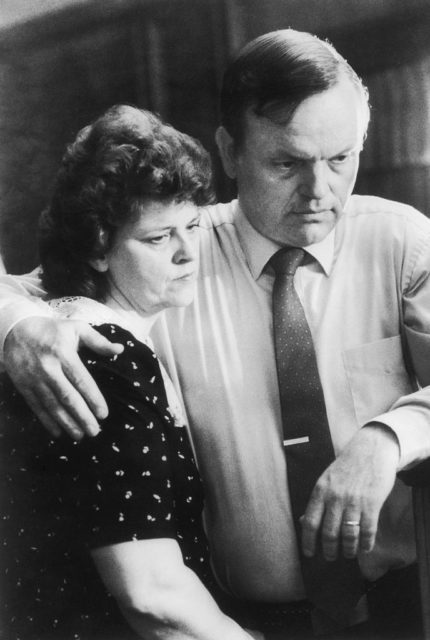 The parents of murdered college student Mark Kilroy, Helen and Jim Kilroy comfort each other on April 2, 1989 at their home in Santa Fe, Texas. (Photo Credit: Bettmann/ Getty Images)

He and his friends had been bar hopping in the city, and decided to make their way back to their car. Kilroy never showed up. He had been kidnapped by the cult and taken back to their ranch where he was horribly tortured. They then used his brain and spine for part of Constanzo’s rituals. Kilroy’s body was then dismembered and buried on the ranch.

It was the capture and murder of Kilroy that marked the beginning of the end for this cult. While it was Kilroy’s friends who were traveling with him who first reported him missing, it was his uncle who expanded the investigation. His uncle was a special agent with the US Customs Service, so he reported Kilroy’s disappearance to multiple different law enforcement agencies in the US and Mexico. 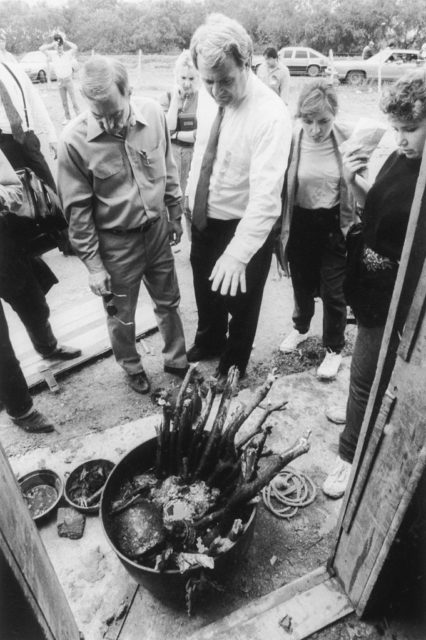 There was little evidence as to where Kilroy went, until a cartel member blew through a drug checkpoint under the belief that the rituals performed by Constanzo made him invisible. He led the police right to Rancho Santa Elena. When law enforcement decided to do a drug bust on the property, one of the workers mentioned previously seeing a white man tied up in a truck. After being interrogated, the same cartel member who led law enforcement to the ranch confessed that he was involved in kidnapping Kilroy.

This led to law enforcement investigating the property in connection with Kilroy’s kidnapping. On the ranch, they found Constanzo’s nganga as well as a “kill shack” that contained torture tools, body parts, and lots of blood. They also uncovered 27 mutilated bodies buried at or near the ranch, including Kilroy’s body. Once all evidence was removed from the scene, the police burned down the ranch and erected a memorial cross on the property.

Their escape and arrest

After he realized that law enforcement had discovered the bodies on their property, Constanzo and some of his cult followers escaped to an apartment in Mexico City. When the police tracked them there, Constanzo started a shootout with the police where he and some of his other followers were killed. It is believed that he asked one of his followers to shoot him, before shooting himself. 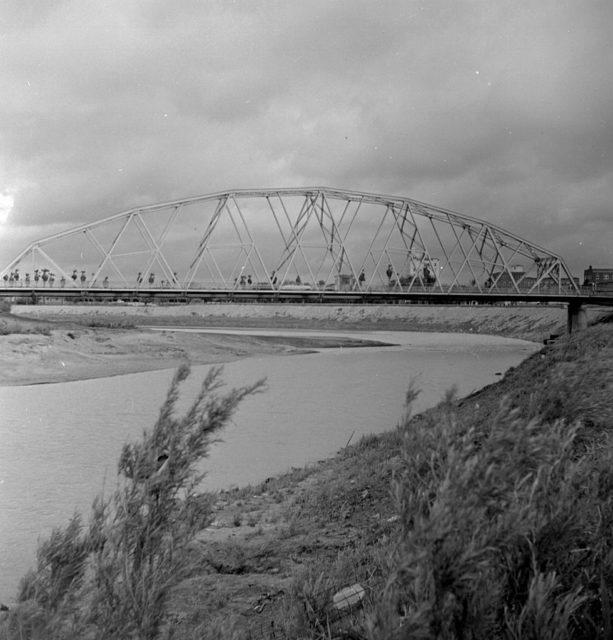 Although Constanzo is dead, and many of the other cult followers were given long prison sentences, there are many who were never caught. In fact, some believe that the number of followers was 10 to 15 times more than initially thought.

Behind every man is a woman

Constanzo may have been the leader of the cult, but he did not do it alone. The second-in-command of the cult was Sara Aldrete. She was raised in Mexico but attended college in Texas before she met Constanzo. He first showed her dark magic before inducting her into his cult where she became the “godmother,” and he gave her the nickname La Madrina. He appointed her to supervise his followers while he was away. 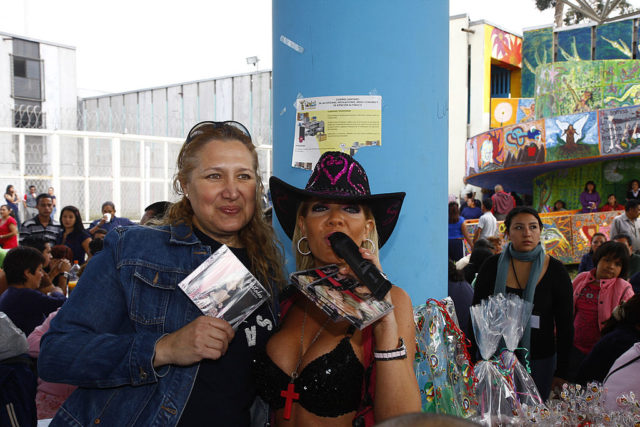 She was one of the followers found with Constanzo in Mexico City, and was arrested when she fled the building during the shootout. Despite being on the run with Constanzo, she maintains her innocence to this day. She alleges that she was forced to confess to her involvement in the murders by being beaten while in the custody of law enforcement, but that she didn’t know anything about the human sacrifice.

More from us: One of the First Attacks on a Commercial Airliner Was By a Man Who Hated His Mother

She claimed that she was kidnapped by Constanzo and taken to the ranch, and the only reason that she was in Mexico City was because Constanzo refused to let her go. However, according to one American official, “she’s a witch, a crook, and she’s guilty as hell.”

« Always Look on the Bright Side of Life with These 11 Most Requested Funeral Songs
Isabella Stewart Gardner Museum Theft: The Greatest Art Heist in History Remains Unsolved »