In the early hours of March 18, 1990, two men dressed in police uniforms approached the security guards at the Isabella Stewart Gardner Museum in Boston. Since they claimed they were responding to a disturbance, the guards admitted the two men – but what came next continues to shock the art history world.

The thieves tied up the guards and spent the next hour looting the museum. They stole 13 works of art, including priceless pieces like Johannes Vermeer’s The Concert – one of only 34 paintings attributed to the famed Dutch Baroque artist – and The Storm on the Sea of Galilee, the only seascape by Rembrandt. Other Rembrandts, Degas, and Manet pieces were also cut from their frames that night. Approximately $500 million in priceless artwork was stolen that night, but the worst part is that the identity of the thieves – and the whereabouts of what they stole – remains unsolved.

The museum was founded by Isabella Stewart Gardner, a famed art collector and philanthropist from Boston, Massachusetts. Gardner (nee Stewart) was born on April 14, 1840, in New York City to a wealthy linen merchant and his wife. Growing up, Gardner was always exposed to fine art, music, and dance. She eventually attended an American school in Paris and traveled around Europe exploring the brilliant works of the Italian renaissance. She returned to New York in 1858, then relocated to Boston. 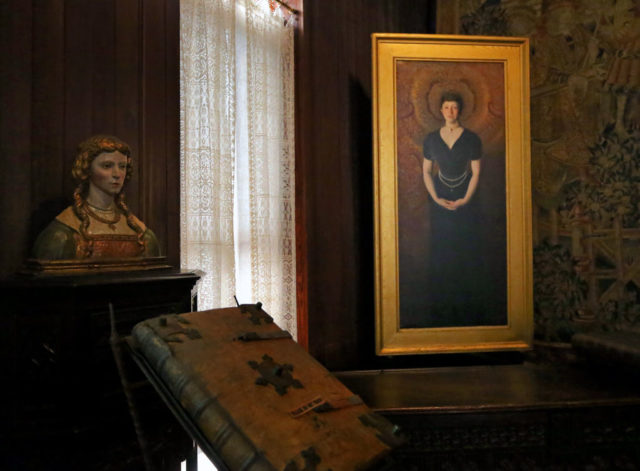 In 1860, Isabella married one of Boston’s most eligible bachelors, John Lowell “Jack” Gardner Jr. The couple had one son who died from pneumonia at just two years old. In 1866, Gardner suffered a miscarriage and was told by doctors that she would never be able to bear children. Heartbroken, Gardner withdrew from society and became increasingly ill. Her doctors suggested that a trip to Europe could improve her health, so Isabella and Jack boarded a ship to Paris.

Paris had a profound influence on Isabella’s health, and as her mood began to improve she eagerly returned home to Boston to establish herself as a fashionable socialite. Following the death of her father in 1891, Gardner used her inheritance to begin her fine art collection. One of her first acquisitions was Vermeer’s The Concert, which was stolen the night of the theft. Gardner traveled to Venice, Paris, and throughout Asia and the Middle East searching for more works to add to her impressive collection. 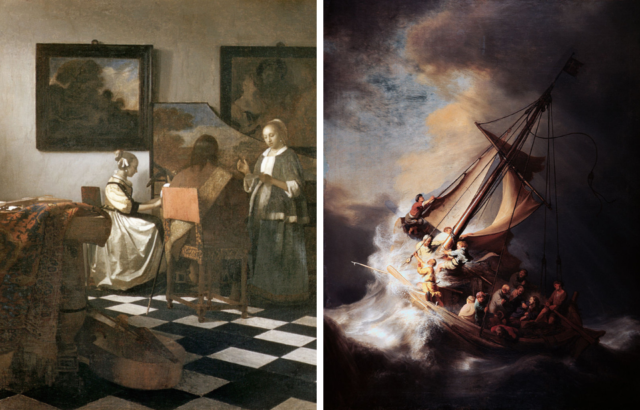 Left: The Concert by Jan Vermeer, circa 1600. Right: Storm on the Sea of Galilee by Rembrandt van Rijn (Photo Credits: Barney Burstein/Corbis/VCG via Getty Images).

In all, the Gardner collection contained 70 pieces of fine art by some of Europe’s most renowned artists, with priceless works like Botticelli‘s Madonna and Child with an Angel, Rembrandt’s Self Portrait, Aged 23, and Titian’s Rape of Europa. Soon the Gardners’ collection had outgrown their home in Boston’s Back Bay. Following the death of her husband in 1898, Isabella decided to pursue her dream of opening a museum to host her collection “for the education and enjoyment of the public forever.” 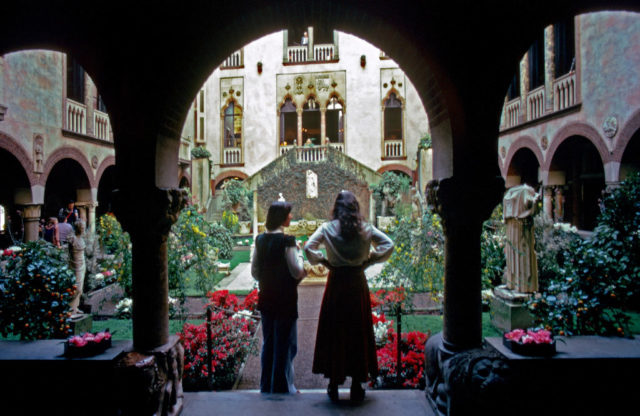 The stunning museum building is inspired by a 15th-century Venetian palace. It includes a garden courtyard surrounded by glass, three floors of gallery space, and a music room – all carefully designed to display Gardner’s collection in her own eclectic way. The museum opened on January 1, 1903, and still operates according to Isabella’s grand vision, long after her death in 1924.

“Gentlemen, this is a robbery”

In the early hours of March 18, 1990, two men disguised as police officers were spotted outside the museum by a group of onlookers. Meanwhile, two museum guards, Rick Abath and Randy Hestand, were on duty. While Hestand stayed in the control room, Abath took the first shift patrolling the galleries. During the patrol, Abath claimed fire alarms went off in various rooms. Thinking it was a malfunction, he went to the fire alarm panel and turned them off. 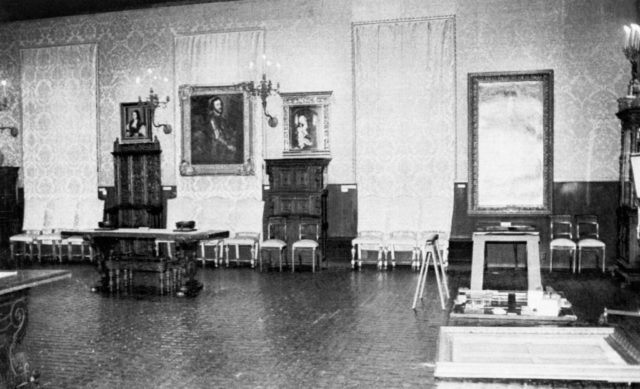 The frame from the Rembrandt painting A Lady and Gentleman in Black (1633) is still on the floor where thieves left it after removing it during the heist. (Photo Credit: Bettmann Archive/Getty Images)

Before completing his patrol, Abath stopped at the side entrance to the museum and opened the door before shutting it again. No one knows why he did this. The thieves parked their getaway car at the side entrance and rang the buzzer at the door, claiming to be police officers investigating a disturbance.

Abath and Hestand saw the two men dressed as cops through their security cameras and buzzed them in. Hestand returned from his patrol to the security desk with Abath to see what the police wanted. Both guards were handcuffed and wrapped with duct tape, then chained to a pipe in the basement while the thieves declared: “Gentlemen, this is a robbery.” The heist had officially begun. 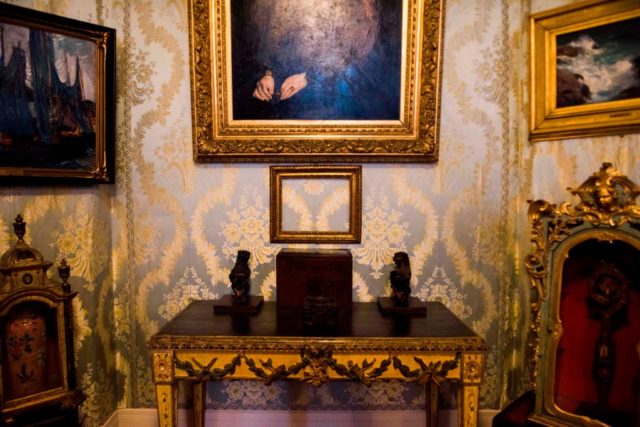 They first entered the Dutch Room and grabbed Rembrandt’s The Storm on the Sea of Galilee and A Lady and Gentleman in Black off the wall and threw them onto the marble floor, shattering the glass in the frames. They then took a knife and cut the canvases out of the frames. They also stole a postage-stamp-sized self-portrait of Rembrandt, Vermeer’s The Concert, and Govert Flinck’s 1683 painting Landscape with Obelisk before finally snagging an ancient Chinese Gu – a type of ritual vessel. 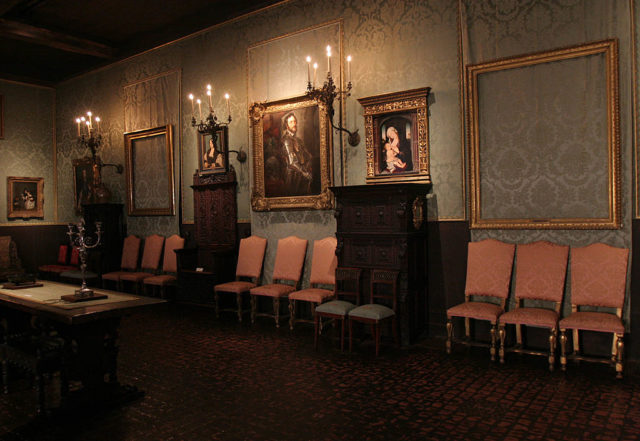 The thieves also tried to steal other items like a Napoleonic flag but decided instead to remove the large brass finial of an eagle from the flag pole. Five Degas sketches were taken from the Short Gallery, and lastly, Chez Tortoni was stolen from the Blue Room on the first floor. They then removed the tapes of the security footage and data recorded by motion detectors – but they forgot to take the hard drive which backed up the data.

Finally, after 81 minutes inside the museum, the thieves exited out the side door and drove off with $500 million of stolen art in the backseat.

Following the heist, FBI investigators released as much information about the thieves as they could to the public, along with an initial $5 million reward for the safe return of the paintings. Investigators believe the heist was planned and executed by a Boston mafia organization known as the Merlino gang. 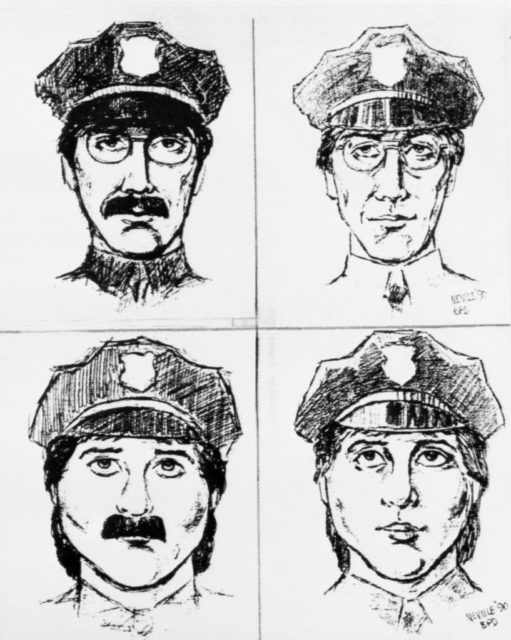 Sketches of the two men who posed as Boston Police officers and robbed the Isabella Steward Gardner museum of priceless art treasures. The suspects are shown both with and without mustaches. (Photo Credit: Bettmann Archive/Getty Images).

In March 2013, the FBI announced they believed that they had identified the thieves as members of the Merlino crime family, assuming they had transported the artwork to Connecticut and Philadelphia, where they attempted to sell it in 2002. Other leads included the museum’s own security guard, Rick Abath.

While multiple theories and investigations have ensued since the robbery, all of them have led to dead ends. The case, which remained the most costly museum theft in the world until the Dresden Green Vault burglary in 2019. Today, the Gardner Museum has upped its reward fund to $10 million. 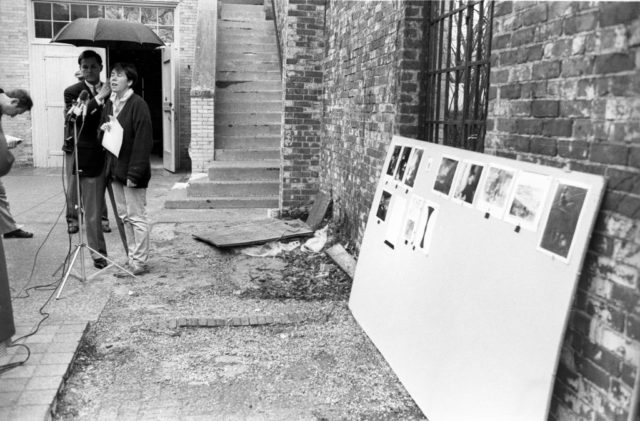 More from us:  6 Body Parts You Can Actually Visit and Who They Belonged To

As per Isabella Stewart Gardner’s will, nothing in the museum’s collection is allowed to be moved. To honor the founder’s wishes, the empty frames that once contained Gardner’s masterpieces have been placed back on the walls in their respective spots – a constant reminder of the loss the museum has suffered. The frames sit empty and wait, hoping that their resident paintings will be returned one day.