A troubled childhood leads to a deep-seated grudge

John Gilbert “Jack” Graham was born in Denver, Colorado on January 23, 1932. Five years later, his father passed away from pneumonia. This prompted his mother, Daisie Graham, to send him to live in an orphanage due to money troubles. While Graham was there, Daisie married her third husband, Earl King, who also died shortly after they were married.

Using the money from her inheritance, the widowed Daisie King became a wealthy businesswoman. Despite this, she didn’t collect her son. 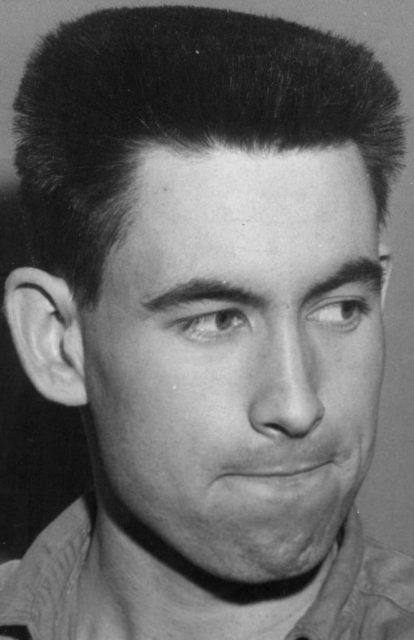 From April 1948 to January 1949, Graham served with the US Coast Guard. However, he wasn’t what you’d call the perfect serviceman, as he went AWOL for a total of 63 days. Despite this, he still managed to receive an honorable discharge, having reached the rank of motorman third class, on the basis of minority.

Graham and King were estranged until 1954, and while they later worked together at her restaurant, the Crown-A Drive-In, they frequently argued. The following year, the establishment was destroyed by an explosion, which many locals believed was deliberately set by Graham to collect insurance. He denied this, saying an examination revealed that an unknown person had disconnected a gas line connection, causing the incident.

On November 1, 1955, United Airlines Flight 629 left La Guardia Airport in New York City, en route to Portland, Oregon. On the way, it was scheduled to make stops in Chicago and Denver. While in Denver, the Douglas DC-6B’s crew swapped out and the aircraft was refueled with 3,400 gallons of fuel.

At 6:52 PM, the plane, with 39 passengers and five crew members onboard, took off from Stapleton International Airport. Daisie E. King was one of the passengers, with plans to visit her daughter in Alaska. The aircraft’s last transmission was recorded at 6:56 PM, with the pilot stating they were passing the Denver Omni. 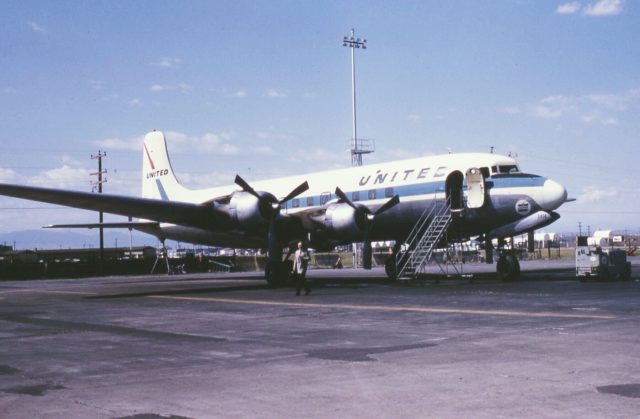 Douglas DC-6, similar to the one that exploded after taking off from Stapleton International Airport. (Photo Credit: EditorASC / Wikimedia Commons CC BY-SA 3.0)

At 11 minutes after takeoff, a control tower operator at the airport reported seeing a flash of light in the sky. The DC-6B exploded mid-air, crash-landing in a sugar beet farm near Longmont, Colorado. All 44 people onboard were killed, including King and the wife of an aide to then-President Dwight D. Eisenhower.

The FBI launches its investigation

Immediately following the incident, the Federal Bureau of Investigation (FBI) offered United Airlines and the Civil Aeronautics Board (CAB) its services in identifying the victims. Some of the bodies were identified by loved ones and personal effects, while 21 were done through the use of fingerprints.

The FBI also worked closely with both organizations during the early days of the investigation, before taking it over on November 8, 1955, at the request of the CAB. During this time, it was discovered that the DC-6B’s tail section had been cleanly severed from the rest of the aircraft, and that it, along with the engines and nose section, had fallen with relatively minor damage.

The middle section of the plane, however, was destroyed and was scattered across the field and surrounding area. 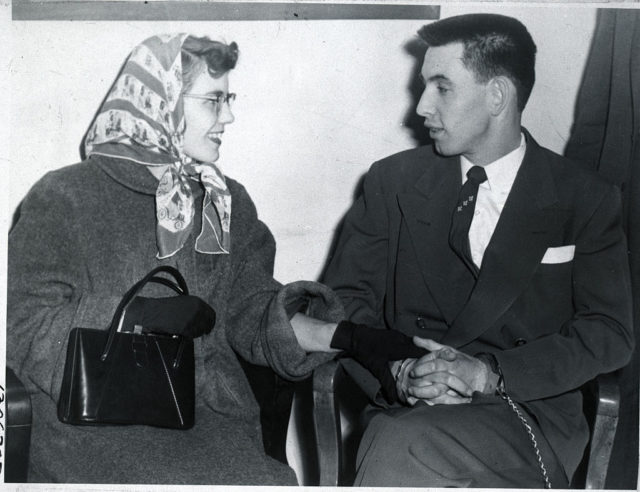 John Gilbert “Jack” Graham sitting with his wife, Gloria, while at a hearing into his involvement in the downing of United Airlines Flight 629. (Photo Credit: Bettmann / Getty Images)

When no signs of internal malfunction were found, the FBI made efforts to uncover if outside sabotage had caused the plane to come down. At the time, investigators were unaware that the cause was a bomb exploding.

Investigators collected evidence and information regarding the luggage held in the DC-6B’s cargo areas and interviewed some 200 individuals who lived within a 140-square-mile area of the crash zone. It was through these discussions and a review that the FBI concluded that two explosions occurred. The first occurred while the aircraft was operating routinely and caused streamers to fall from the plane, while the second occurred when the engines and forward compartment struck the ground. 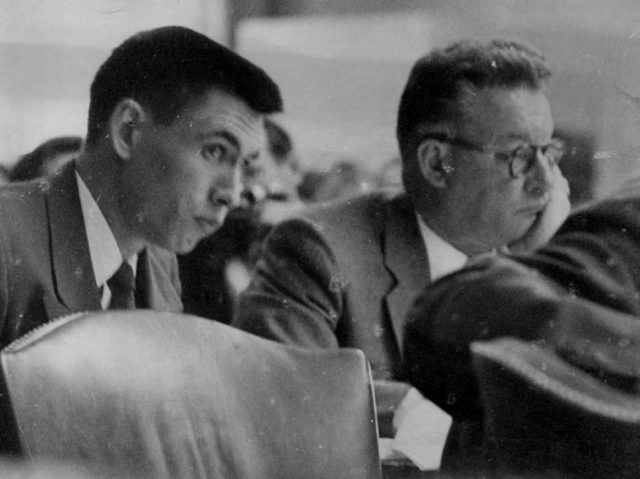 Over the course of the subsequent days and weeks, as much of the DC-6B as possible was collected from the surrounding area and brought to a large warehouse at Stapleton International Airport. It was during this time that small fragments of metal were located that didn’t belong to the aircraft. One of these was later determined to belong to a six-volt battery.

A mock-up of the plane was also made from wood and wire netting, which allowed investigators to narrow down the location of the explosion to the rear cargo pit.

During the examination of passenger luggage, investigators came across the personal effects of Daisie E. King. Among them were a number of personal letters and newspaper clippings, an address list, keys to and a receipt for a rented safety deposit box, a personalized checkbook, and $1,000 in traveler’s checks. One of the newspaper clippings was about her son, who’d been placed on the local “most wanted” list in 1951 for forgery.

On November 13, 1955, FBI agents searched Graham’s home, where they found life insurance policies for his mother, as well as wire and bomb-making parts that were identical to those found in the wreckage of the DC-6B. Speaking with those who knew the family, investigators learned of his and King’s poor relationship, as well as additional criminal charges, which further put suspicion on him. 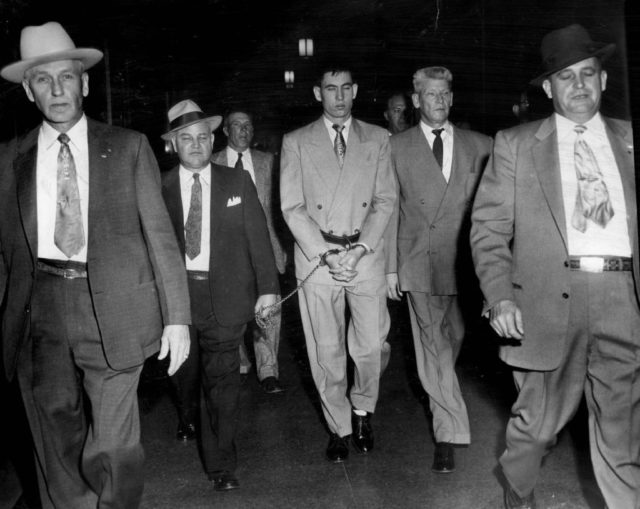 While Graham, at first, lied about his family and background, he later admitted to planting a time bomb in his mother’s luggage prior to her trip. He also revealed that he’d purchased $37,500 worth of life insurance policies for his mother in the airport terminal, prior to the flight’s departure. At the time, flight insurance could be purchased at vending machines in airports across the United States.

What Graham didn’t know at the time is that they would have been voided, as King’s signature wasn’t on the documents. 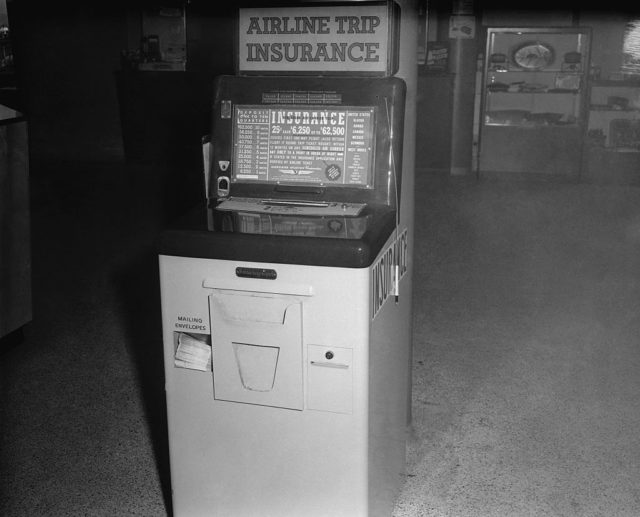 Coin-operated flight insurance machine, similar to the one used by John Gilbert “Jack” Graham to purchase insurance for his mother prior to her departure from Stapleton International Airport. (Photo Credit: Bettmann / Getty Images)

While speaking with the FBI, Graham also admitted to causing the explosion at the Crown-A Drive-In. His motive for both incidents, along with a third one involving his pickup truck being totaled by a moving train, was to collect thousands of dollars in insurance money. A secondary motive for his mother’s death was the ill feelings he held toward her.

On November 14, 1955, a complaint was filed before the US Commissioner in Denver, charging John Gilbert “Jack” Graham with sabotage. Investigators also hoped to charge him with the deaths of those onboard the DC-6B, but were shocked to find out that there was no federal statute on the books regarding the downing of an aircraft. As such, the FBI was resigned to charging Graham with the first-degree murder of his mother.

By this time, he’d recanted his confession.

More from us: How the Stars of ‘Gaslit’ Compare to Their Real-Life Watergate Counterparts

Graham’s attorneys tried and failed to have their client found criminally insane, and while they tried to counter the prosecution’s evidence, were unable to do so. Graham was found guilty of murdering his mother and sentenced to death, with those involved in the case wanting to make an example out of him. He remained in prison until January 1957, when he was executed.

Following the downing of United Airlines Flight 629, President Eisenhower introduced and signed a bill into law that made the intentional bombing of a commercial airliner illegal.

« How ‘The Lord of the Rings’ was Forged in the Battle of the Somme
What Was the Black Death, and Where Did It Originate? »