Joe Delaney was an American football player who was a running back for the Kansas City Chiefs in 1981 and 1982. He excelled at the sport, but was also known for his grace and humility and was commended for his character. His life and career were cut short, as he tragically died trying to save the lives of three young boys who were drowning in a pond in Monroe, Louisiana. 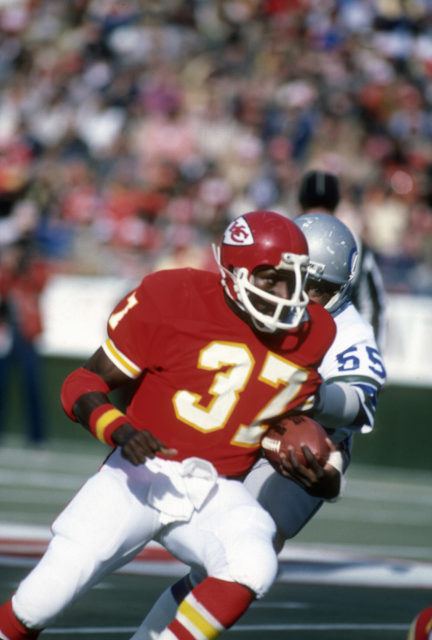 Delaney attended Northwestern State University (NSU) in Natchitoches, Louisiana and established himself as a football superstar. He had accumulated 3,047 rushing yards and 31 touchdowns while playing for the school. In an incredible game against Nicholls State University, he gained 299 yards and scored a whopping four touchdowns in only 28 carries. His time at NSU was short but impactful, and he was able to attract the attention of NFL scouts and bring them to the small university’s campus to see if he had the right stuff.

Once they saw Delaney in action, it was clear he was going to be an NFL athlete. In 1981, he was drafted by the Kansas City Chiefs as a running back in the second-round draft picks. He was the 41st pick overall and did not disappoint his team in his first season.

Rookie of the Year 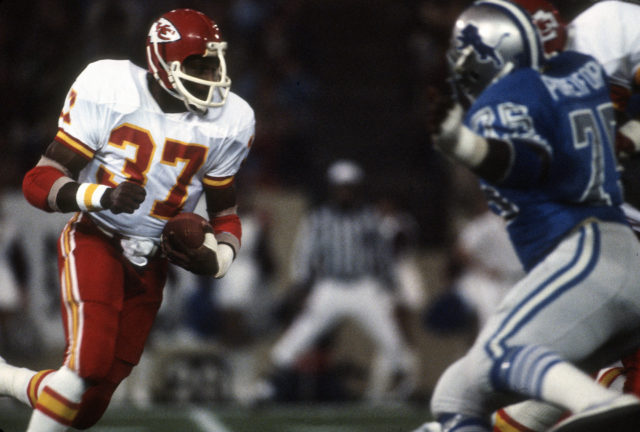 Joe Delaney, #37 of the Kansas City Chiefs, carries the ball against the Detroit Lions during an NFL football game November 26, 1981 at the Pontiac Silverdome in Pontiac, Michigan. (Photo Credit: Focus on Sport / Getty Images)

In his first year with the Chiefs, he gained 1,367 yards and scored three touchdowns from scrimmage. It was no surprise when he made Pro Bowl, which is the all-star game where the best players from teams in the AFC and the NFC go head-to-head to showcase their achievements from that season. Given his track record, Delaney was an obvious pick for the AFC West division.

His previous coach at NSU received a call from the Chiefs describing how incredible of an athlete Delaney was. Les Miller, the Chiefs’ director of player personnel, said, “I just wanted to tell you that Joe Delaney is the finest young man and the hardest worker we’ve ever had here.” Delaney was a dedicated player and his first season also earned him AFC’s Rookie of the Year by United Press International. He was a superstar athlete, to say the least.

That day at the pond

During the summer break before the 1983 season, Delaney had gone home to Monroe, Louisiana with his wife Carolyn and their three children. On June 29, they went to Chennault Park where a large water hole had been created by construction work. Delaney noticed three young boys struggling in the water. A small crowd gathered as they tried to get back to safety, but no one tried to help except Delaney.

Joe Delaney tallied 1,367 yards from scrimmage in 1981 at just 23 years old. He had an immeasurably bright career ahead of him, but he was willing to sacrifice it all to save others on this day 39 years ago.

A hero in every sense of the word. Chiefs Kingdom remembers you, Joe. pic.twitter.com/YKzh2hZxy5

Before he jumped in, he said, “I can’t swim good, but I’ve got to save those kids. If I don’t come up, get somebody.” Then he jumped into the water. One of the young boys managed to get out of the pond safely, but the two others, Lancer Perkins and Harry Holland Jr., both 11 years old, died from drowning. Delaney would also not make it out of the pond, and died from drowning as well. He was just 24 years old. 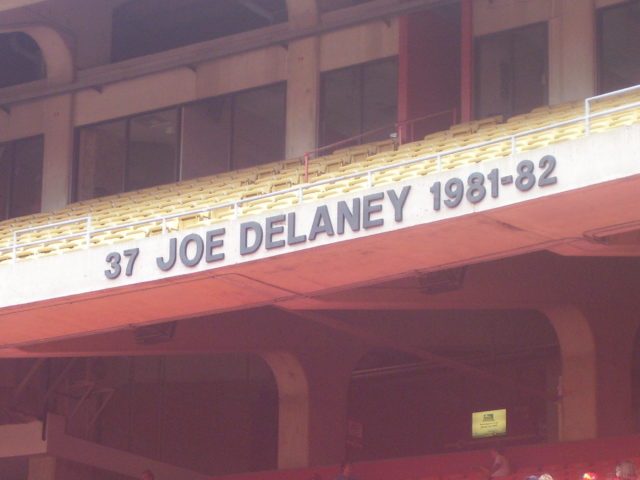 Joe Delaney’s name, along with his jersey number, displayed in the Ring of Honor for the Kansas City Chiefs (Photo Credit: Conman33 at the English language / Wikimedia Commons CC BY 3.0)

A memorial service was held for Delaney in the fall of that year. His NSU coach spoke at the memorial, saying, “People ask me, ‘How could Joe have gone in that water the way he did?’ And I answer, ‘Why, he never gave it a second thought, because helping people was a conditioned reflex to Joe Delaney.’” Owner of the Chiefs Lamar Hunt also spoke at the memorial, saying, “While Joe Delaney’s athletic accomplishments are many, it will be the character, the dedication, and the genuine good nature of this man which we will always treasure in mid-America.”

Marvin Dearman, the diver who retrieved Delaney from the pond said that Delaney had basically died in his arms and that it was something that had never left him. In 2020, he advocated for there to be a permanent memorial to Delaney located at Chennault Park where he sacrificed his life in the ultimate act of bravery and humanity.

More from us: 15+ Heroic Facts About Clara Barton

A memorial now stands by the pond in Monroe, and Delaney was inducted into the Chiefs Ring of Honor. No Chiefs player has ever worn his number – 37 – since his death.