Cabrini-Green: How Racism Turned a Promising Neighborhood into a Nightmare

Chicago’s Cabrini-Green, once a vibrant, affordable community in the Near North Side of Chicago, sought to prove what public housing projects could offer. Popularly known as the setting for the iconic film Candyman, Cabrini-Green’s history of neglect, racism, and government corruption led the housing projects into disrepair.

After years of unanswered calls for help, the residents of Cabrini-Green were finally promised change – but $2 billion dollars and countless broken promises later, what was once home for thousands is now unrecognizable and unattainable.

Cabrini-Green housing was a fresh start

First opened in 1942, the Chicago Housing Authority’s (CHA) Frances Cabrini Rowhouses were low-rise affordable apartments built for war workers and veterans. By 1958, the area had expanded to include a high-rise extension followed by the addition of the William Green Homes in 1962 – thus giving the neighborhood the nickname “Cabrini-Green.” 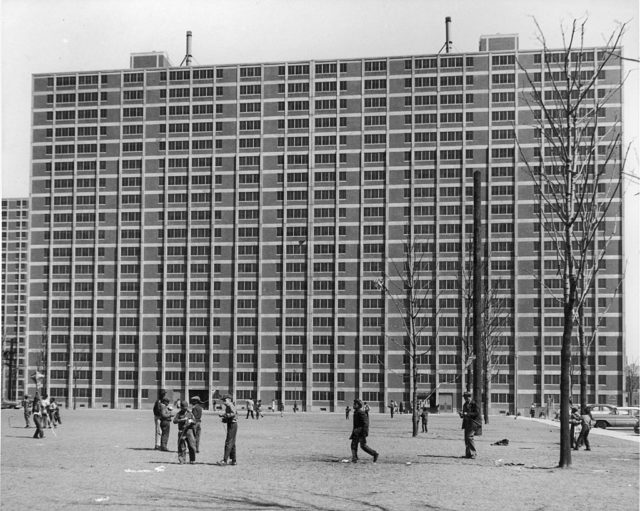 Exterior view of the Cabrini-Green housing project, with children playing and people milling about in the courtyard, circa 1960s. (Photo Credit: Chicago History Museum / Getty Images)

The apartments were built to remedy the rising number of slums run by landlords who often exploited people of color with high rents and horrific living conditions. Located in Chicago’s north end, the population of Cabrini-Green reflected a mosaic of Italian and Irish immigrants, Puerto Ricans, and African Americas who were brought together by racial segregation in the 1960s.

Dolores Wilson, a Chicago native and local activist, recalled her experience living at Cabrini-Green as one of the first families granted an apartment in the new development. Wilson, who lived there with her husband and five children, had been used to living in basements and tiny apartments for years – something many other Black residents had also experienced prior to moving to the housing project. 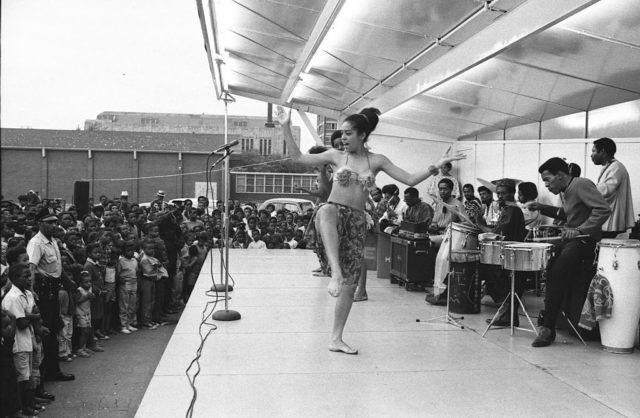 Residences were equipped with basics like heating and running water, as well as extra amenities like elevators and even rent rates adjusted to match income and plenty of help for those struggling to make ends meet. Since many residents had similar backgrounds and experiences, Cabrini-Green quickly became a close-knit community where everyone was friendly and looked after one another – something many apartment complexes today are lacking.

Racism drove the decline of Cabrini-Green

Originally, Cabrini-Green was intended to be a short-term housing solution for those in need to help alleviate poverty in the area. But the lack of opportunities for other housing or proper jobs for people of color meant that many families were forced to stay long-term. 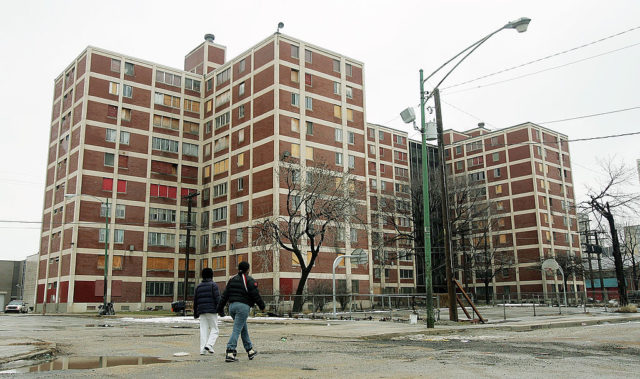 As more residents arrived, jobs and businesses began popping up all over thanks to nearby industries in manufacturing, food products, and more. But as one community flourished, the rest of Chicago took notice. More and more residents were earning enough income to purchase their very own homes, but unspoken rules surrounding race in neighborhoods meant that Black men and women couldn’t buy homes from white owners.

“Redlining” also occurred, a practice that denied dominantly Black neighborhoods access to essential services and infrastructure solely based on one’s address. This meant that mortgages and business loans were usually denied, emergency services rarely responded to emergency calls, and ultimately, progress was halted. 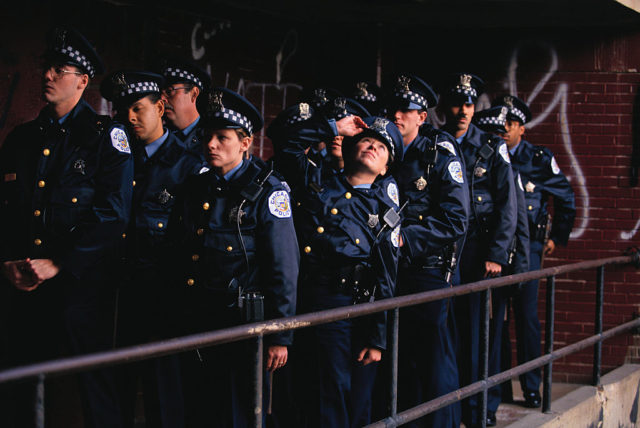 Uniformed police officers assemble outside before raiding a building in the Cabrini-Green Housing Project, circa 1992. (Photo Credit: Ralf-Finn Hestoft / CORBIS via Getty Images)

The CHA also failed to budget enough to maintain the buildings. Soon, the high-rises resembled the same destitute housing that the CHA was hoping to avoid. Tensions grew during the 1968 riots in Chicago’s West Side following the assassination of Martin Luther King Jr.

Countless families became homeless after apartment buildings were destroyed during the riots. Chicago’s only solution was to relocate the West Side families to vacant apartments on the North Side at Cabrini-Green. The city didn’t consider what could happen when two communities collided. 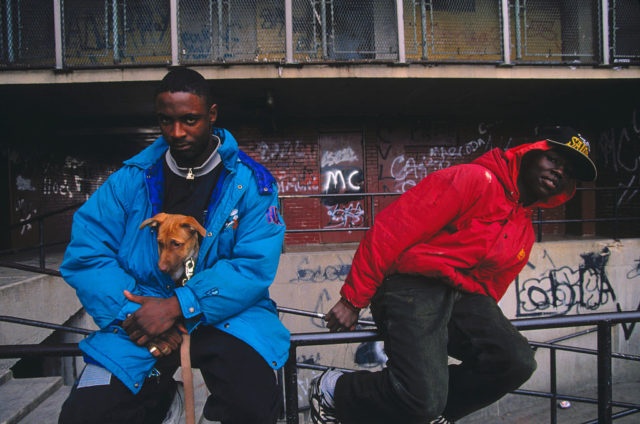 Two young men sit on a railing outside the Cabrini-Green housing project in Chicago, circa 1992. (Photo Credit: Ralf-Finn Hestoft / CORBIS via Getty Images)

North Side and West Side gangs began fighting for control of the area, even though they had rarely fought before. Organized crime became an increasing issue at Cabrini-Green, which contributed to growing rates of violence, drug use, and poverty. By the early 1970s, many of the essential jobs for residents had dried up, leaving young people with few options.

Gangs offered a sense of community and purpose that was lacking in other jobs, and they provided a steady source of income thanks to the burgeoning drug trade. As the size and influence of local gangs grew, so did their hold over Cabrini-Green. 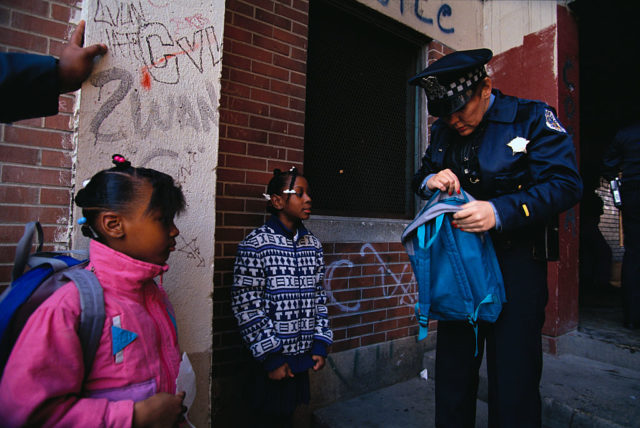 A policewoman searches the schoolbag of a young African American girl in the graffiti-covered Cabrini-Green Housing Project, circa 1992. (Photo Credit: Ralf-Finn Hestoft / CORBIS via Getty Images)

Local and national press widely publicized the “failure” of Cabrini-Green, describing the neighborhood as the ‘Wild-West’ of Chicago in the grips of poverty and gang violence. While the press blamed the residents of Cabrini-Green, they had nothing to do with the decline of the once-welcoming community. The city of Chicago was truly the one to blame for the pain and suffering of those living in the run-down apartments.

By the 1980s, new up-and-coming areas surrounding Cabrini-Green like Lincoln Park and the “Gold Coast” along Lake Michigan meant that officials began looking for ways to gentrify the historically marginalized community.

Residents consistently appealed to the local government to address their overwhelming neglect. Finally, in 1997 Mayor Richard Daley sent prominent Black officials to the neighborhood to hold a gathering and present a billion-dollar transformation plan.

Daley proposed that the only way to truly repair the decades of neglect at Cabrini-Green was to tear the highrise buildings down and start fresh. While many residents saw this as a promising step toward better low-income housing in Chicago, Daley had other plans.

Not only did Mayor Daley promise to restore the neighborhood, but it was also announced that everyone who wanted to could return to the rejuvenated Cabrini-Green and hundreds of construction jobs were promised to residents. The ten-year initiative planned to spend $1.5 billion dollars to demolish 18,000 apartments with the possibility of fixing up an additional 25,000 apartments. Residents were also promised a brand new library, an upgraded local park, and a new shopping center. 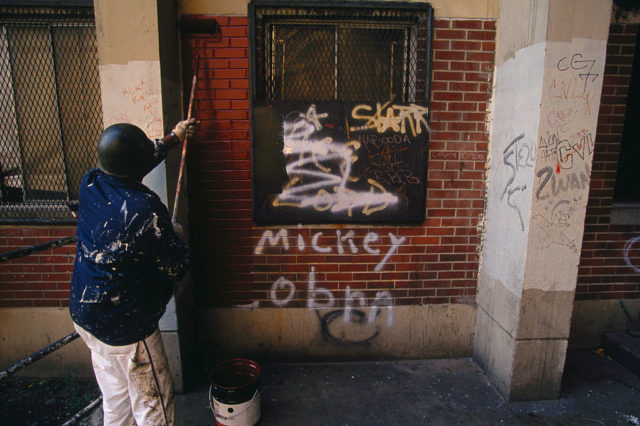 A worker paints over graffiti on a wall at the Cabrini-Green housing project in Chicago. (Photo Credit: Ralf-Finn Hestoft / CORBIS via Getty Images)

With the hopeful news that Cabrini-Green was finally getting the attention it deserved, Black-owned businesses began to pop up throughout the neighborhood in anticipation of a new influx of customers. Many residents held off on seeking other opportunities and chose to wait until the renovations were completed.

In 2011, the last high-rise building was demolished. Today, many of the revitalizations the CHA promised have been completed – but not in the way residents had envisioned. The renovation initiative was actually the perfect way to gentrify an entire area without residents even knowing. By tearing down the previous structures that bore witness to the effects of racism on a marginalized community, it’s as if the history of racial injustice was virtually wiped away.

Cabrini-Green and the ‘Candyman’

Cabrini-Green gained international notoriety thanks to the 1992 film Candyman, which follows an urban legend that spurred from the Cabrini projects. Candyman, a ghostly figure who haunts Cabrini-Green, represents the ongoing legacy of slavery and racism in America. The film received mixed reviews, especially because of its problematic depiction of Cabrini-Green that mirrored the same harmful sentiments as media outlets. 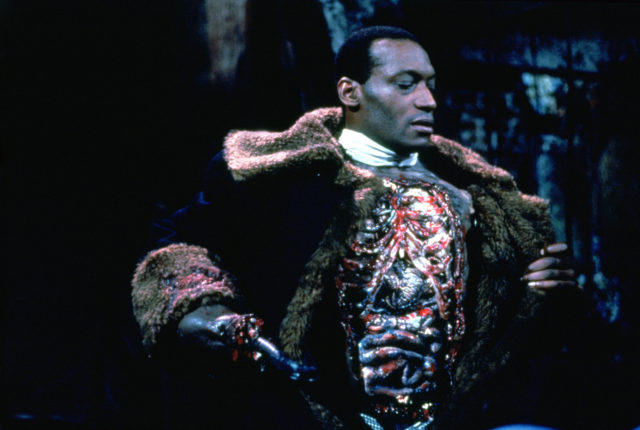 Tony Todd as the Candyman from the 1992 film “Candyman” (Photo Credit: TriStar Pictures via. MovieStillsDB)

The film follows Helen Lyle, a white Ph.D. student studying urban legends, as she ventures into Cabrini-Green searching for information on a mysterious figure known as “Candyman.” The legend claims that if you say “Candyman” in the mirror five times, he will appear and kill you with his hook hand.

In 2021, a sequel to Candyman, under the same name, set out to explore the gentrification of Cabrini-Green. Set in one of the newly built luxury high rises, the new film is a stark contrast to the original that proves that even though buildings come and go, the scars of racism can never be erased. 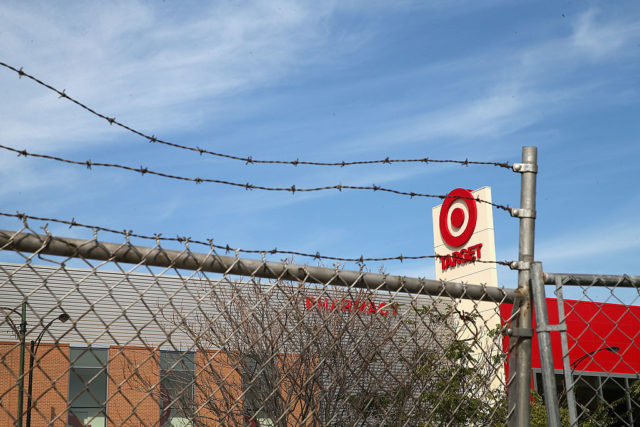 Today, Cabrini-Green is a trendy, predominantly white neighborhood complete with a riverwalk lined with boats and brand new apartments for tenants of various incomes, most of which original residents could never afford. New high-end shops like an Apple Store and Target also signify the alienation of Cabrini-Green’s previous residents.

More from us: The Fact These 6 Horror Films Are Based On Real Events Make Them Even Scarier

The project cost taxpayers $2 billion dollars as it fell ten years behind schedule. Of the 2,500 construction jobs promised by the initiative for Cabrini-Green residents, only 40 positions were actually filled. And of the 3,500 families who were forced to leave their homes before the renovations, more than 80% have yet to return even though they were promised they could.

« ‘No Time to Die’ Actress Ana de Armas Weighs in on Whether Bond Should Be a Woman
Miriam Margolyes’ Beef With Arnold Schwarzenegger: ‘He Farted in My Face’ »