The Filming of ‘Jaws’ Almost Ended in Real-Life Tragedy

When Jaws first hit the big screen in 1975, audiences were terrified and thrilled to see the ocean’s deadliest predator come to life, leaving countless victims in its wake. But for Susan Backlinie, the stuntwoman who played Jaw’s first victim Chrissie Watkins, filming the death scene almost resulted in the same fate as her character’s – trapped in the mouth of a giant shark.

Set on Amity Island, Jaws takes place in a small community whose main business is its beaches. When Sheriff Martin Brody discovers the body of a shark attack victim, he tries to raise the alarm and evacuate the crowded beaches, but the local mayor convinces Brody to keep things open.

Soon, more victims are dragged underwater by a massive shark, prompting an angry mob of fishermen and amateur hunters to attempt to catch the monster. Brody joins a fisherman and an oceanographer on the quest to catch the killer shark. 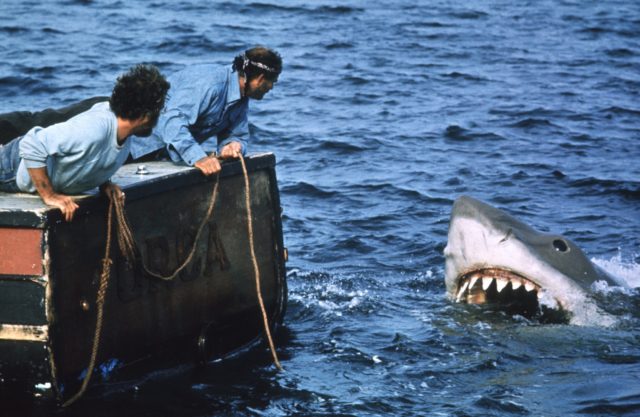 Jaws was an overnight sensation. Over 67 million people went to see it in theaters in the United States alone, making it the first-ever summer blockbuster. The film snagged three Oscars at the 1975 Academy Awards and has since been followed by three sequels. 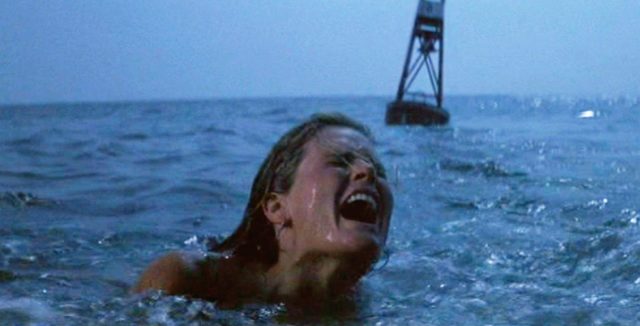 The film’s success likely wouldn’t have happened if it weren’t for Steven Spielberg, who was actually not the original director. The first director, Dick Richards, was fired from the project after calling the shark a “whale” in a meeting. The producers were enraged that Richards didn’t know the difference between a whale and a shark, and brought Spielberg on in his place.

Filming a realistic-looking shark attack in the 1970s was far from easy, and using any real animals was out of the question. In order to achieve the larger-than-life size of Jaws, a massive fake shark head (which was affectionately called Bruce on set) was made for filming. 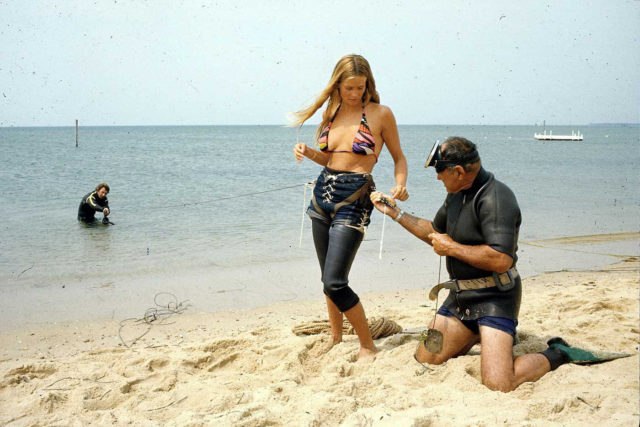 Susan Backlinie strapped into the shorts used to create the drowning effects for the opening sequence of Jaws. (Photo Credit: Universal Studios / movienutt via MovieStillsDB)

In the film, teenage character Chrissie Watkins decides to go skinny dipping with her boyfriend. The attack scene ended up being a little too close to the real thing for stuntwoman Susan Backlinie.

Backlinie was wearing jean shorts with a built-in harness attached to underwater cables that would keep her from floating around. To create the effect of being dragged around by a shark, the cables would be pulled from side to side on the beach. What she didn’t know was that another cable, attached to the ocean floor, would drag her underwater unexpectedly to capture her genuine reaction to drowning.

At a fan convention, Backlinie revealed she got the part in Jaws by submitting a nude picture of herself – but she didn’t expect to appear naked in the film. 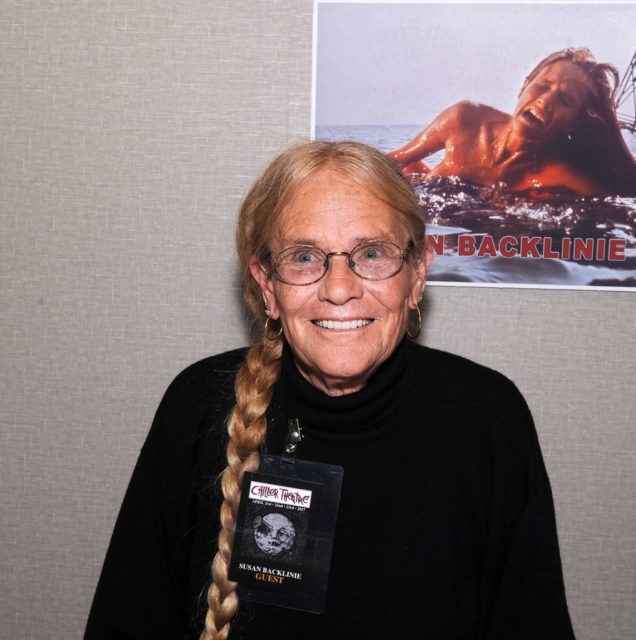 More from us: The Jersey Shore Shark Attacks: ‘Twelve Days of Terror’ That Inspired ‘Jaws’

Today, 75-year-old Backlinie is in deep water with the law. In 2020, she was arrested on battery charges and is set to appear in court in November 2022. She was also charged with driving under the influence in 2019 after she crashed into a car in her Ventura California neighborhood. She currently lives on a houseboat that reportedly looks quite similar to the ORCA, Brody’s fishing boat used to catch the monster shark in the film.