Boy in the Box: The Pennsylvania John Doe Who’s Gone Unidentified Since 1957

It’s estimated that 40,000 sets of remains are unidentified in the United States, with an additional 4,400 discovered annually. Of that, 1,000 remain unidentified after a year. One of the oldest of such cases is Philadelphia’s Boy in the Box, whose body was found in a wooded area in February 1957.

Despite over half a century of investigation, the child’s identity still remains unknown. However, could advancements in DNA testing allow for the case to finally be solved?

The Boy in the Box is discovered

The body of the Boy in the Box was discovered in late February 1957. A young man was checking animal traps in Philadelphia’s Fox Chase neighborhood when he came across a cardboard box, which contained the body of a young male child wrapped in a plaid blanket. Instead of going to police, the man decided to not report the discovery, out of fear his traps would be seized. 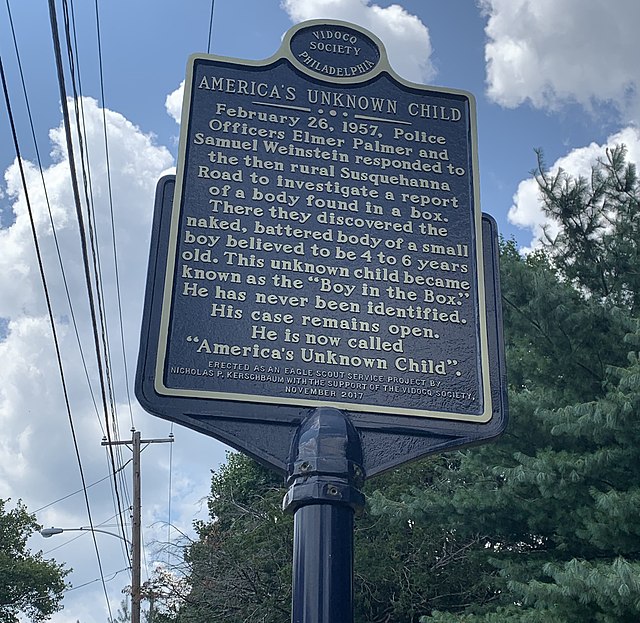 A memorial sign has been erected near where the Boy in the Box was discovered in 1957. (Photo Credit: TheXuitts / Wikimedia Commons CC BY-SA 4.0)

A few days later, on February 25, 26-year-old La Salle College student Frederick J. Benonis was driving along Susquehanna Road when he saw a rabbit dash into a nearby thicket. Aware there were traps in the area, he pulled over and journeyed into the brush, where he came across the boy’s body. However, he thought he’d found a doll and, just like the previous man, didn’t report his find to the authorities.

While listening to the radio the next day, Benonis heard a report about a missing four-year-old girl. Believing what he’d seen was related, he contacted local police. When asked why he’d waited to report the discovery, he revealed he’d been spying on students at the nearby Good Shepherd School and hadn’t wanted anyone to know why he was actually in the area.

The Boy in the Box wasn’t the missing girl. She was located deceased a week later, after having wandered into a vacant home where she died of starvation.

An autopsy determines the boy’s cause of death

The Boy in the Box’s body was brought to the local medical examiner’s office, where the cause of death was determined to be blunt force trauma to the head. The child’s forehead featured four round bruises, and his face appeared blood-drained.

A time of death couldn’t be concretely determined, given the cold and rainy weather the area had been experiencing. However, the medical examiner was able to estimate that the boy had died between a few days to two weeks prior to his body being discovered. 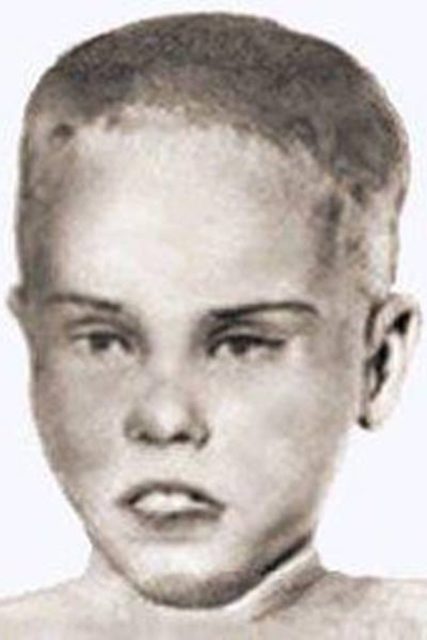 A number of other key pieces of information were also noted. The first was that it appeared as though the Boy in the Box had suffered years of abuse. Bruises were located all over his body, and his ribs showed through his chest, indicating he was malnourished. This was further supported by an analysis of his bones, which revealed his growth had been stunted.

Additional things of note included that the child’s esophagus showed signs he’d thrown up before his death, despite having not eaten two-to-three hours prior. His feet were also wrinkled, which signaled to investigators that he’d been submerged in water just before he lost his life. 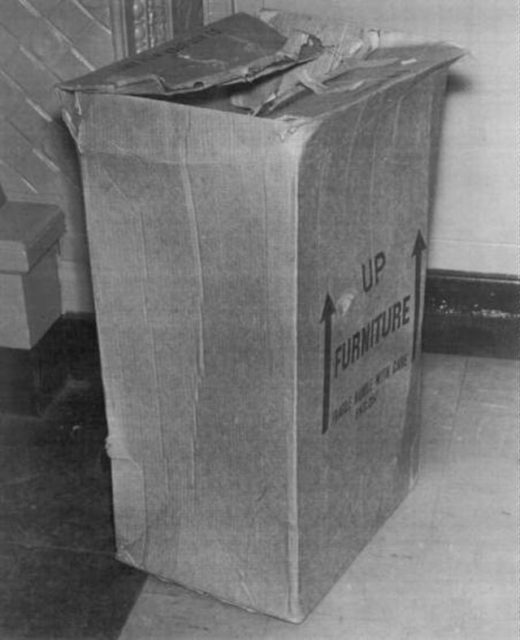 Despite the apparent abuse, it did appear as though the Boy in the Box had received medical treatment at points in his life. He had seven scars, three of which looked to be the result of surgical procedures. As well, he’d appeared to have suffered from a chronic eye ailment or recent infection, which had been treated with medication.

The investigation into the Boy in the Box’s identity begins

At first, it was believed the Boy in the Box’s identity would be uncovered quickly. However, this proved false, as no missing child reports resembling his description were submitted. This forced investigators to ramp up their efforts. To generate leads, they broadcast information over police teletype and contacted child welfare agencies and other law enforcement groups.

While this resulted in visitors traveling from 10 states to try and identify the boy, his name still eluded police. 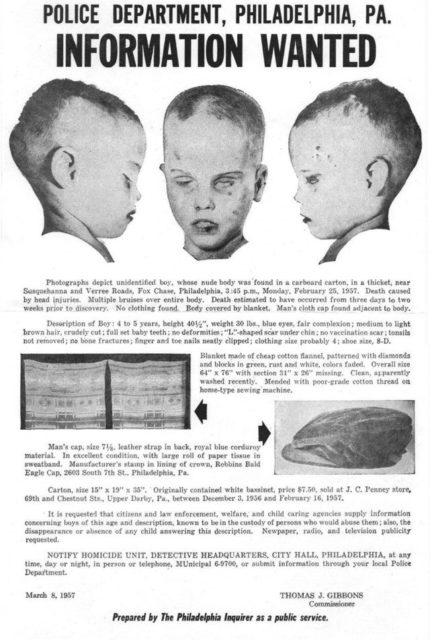 Hundreds of thousands of flyers were printed, in an attempt to identify the Boy in the Box. (Photo Credit: Philadelphia Police Department / Wikimedia Commons / Public Domain)

The local media was approached, resulting in the Philadelphia Inquirer printing 400,000 flyers. These were distributed across the local area and were included in gas and electricity bills. An article, which described the boy’s scars, was also printed in a pediatric journal.

Neighborhoods were canvassed, as were hospitals, foster homes and orphanages. When investigators visited the hospitals, they tried to compare the Boy in the Box’s footprints and fingerprints to those the institutions had on file. However, these efforts, too, failed to bring about any leads.

Turning to the physical evidence

Investigators turned their attention to the box the boy was found in. It had a serial number, which allowed them to trace it to a JCPenney store in Upper Darby, Pennsylvania. It had contained a white bassinet, which was sold from December 5, 1956 to February 16, 1957. Records showed that 12 purchases had been made, but after tracking down eight of the buyers, the lead went nowhere.

The blanket, which was well-worn and appeared to be inexpensive, also proved to be a dead end. While only manufactured in two areas, thousands had been produced and shipped across the US. This meant it was near impossible for investigators to pinpoint where it had been purchased. 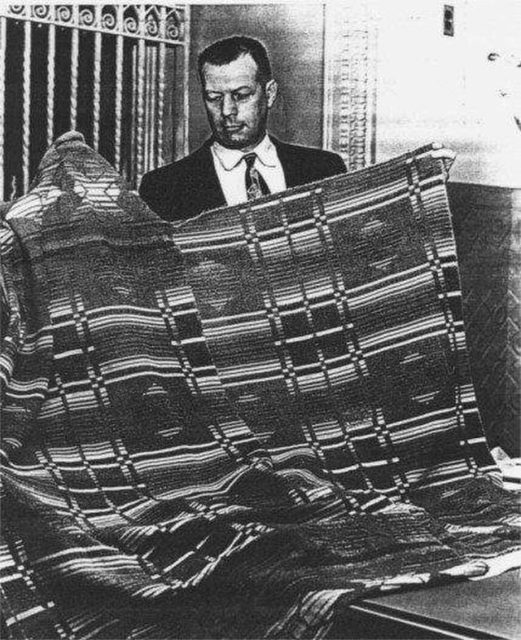 The blanket the Boy in the Box was found wrapped in. (Photo Credit: Philadelphia Police Dept. / Wikimedia Commons / Public Domain)

Attention was turned to a royal corduroy blue cap that was found during a canvas of the crime scene. It was located along with a handkerchief with the letter “G” in the corner and a tan child’s scarf, and was in relatively good condition. The manufacturer’s stamp was located in the lining, reading, “Robbins Bald Eagle Cap, 2603 South 7th St., Philadelphia, Pa.”

When the shop’s owner was questioned, it was learned the cap had been customized for the person who bought it. According to her, the man was between the ages of 26 and 30, with blond hair and no identifiable accent, and she never saw him after the purchase.

Over 100 stores in the area were canvassed, but no one recognized the cap or the Boy in the Box, and no additional information on the man was uncovered. 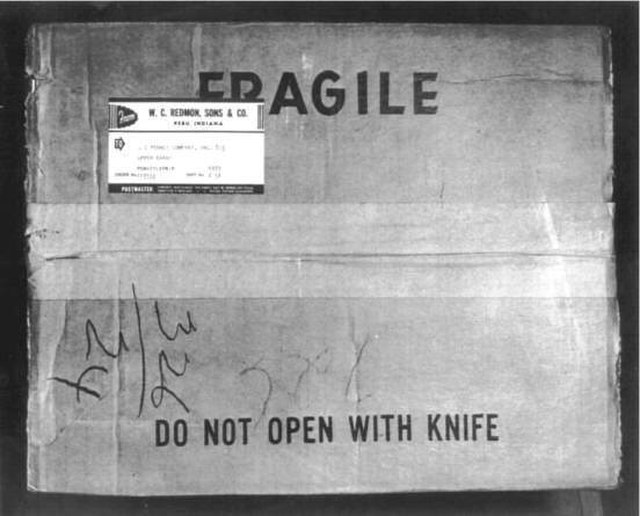 With nowhere else to turn, investigators released a post-mortem photo of the boy dressed and in a seated position. Artist renderings of what he may have looked like as a female were also created, in case he passed for one while alive, but both of these efforts failed to generate any leads.

In the end, the Boy in the Box was buried in a potter’s field in Holmesburg, Pennsylvania, his tombstone reading, “Heavenly Father, Bless This Unknown Child.” Following a later exhumation, he was reinterred in a grave in Philadelphia’s Ivy Hill Cemetery.

Additional efforts to identify the Boy in the Box

Remington Bristow, a former employee of the Philadelphia medical examiner’s office, felt a personal connection to the Boy in the Box and dedicated much of his time to uncovering the child’s identity. In an effort to coax out his parents, Bristow published a fake story in a local newspaper, claiming the death had been accidental and that his parents had dumped the body because they were unable to afford a funeral.

The ploy failed, as did Bristow’s efforts to elicit leads with a $1,000 reward for information. 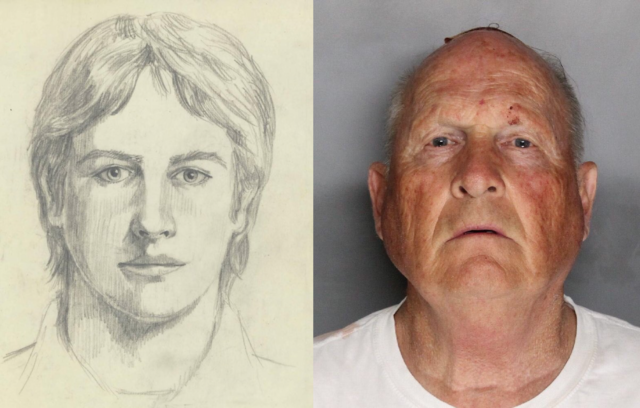 Joseph DeAngelo was identified as the Golden State Killer in 2018 through the use of genetic genealogy. (Photo Credit: FBI / Sacramento Sheriff / Wikimedia Commons / Public Domain)

In 1998, the Boy in the Box’s remains were exhumed to collect DNA. The same occurred in 2019, which resulted in the creation of a DNA profile. A year prior, the genetic genealogist responsible for identifying the Golden State Killer (also known as the East Area Rapist) also offered her help.

The Vidocq Society, a crime-solving club in Philadelphia, also appealed to the public for information. It asked for those aged 55 and older to think back and recall if they remember a boy who may have gone missing within a 40-mile radius of the city in 1957. The group also asked doctors to check their medical records to see if anything on file matched the scars on the child’s body.

Theories abound regarding the identity of the Boy in the Box and what happened to him. Some believe he was the child of carnival workers, while others theorize he was raised as a girl. However, there are two theories that have received the most focus. While one has since been debunked through DNA testing, the other has not. 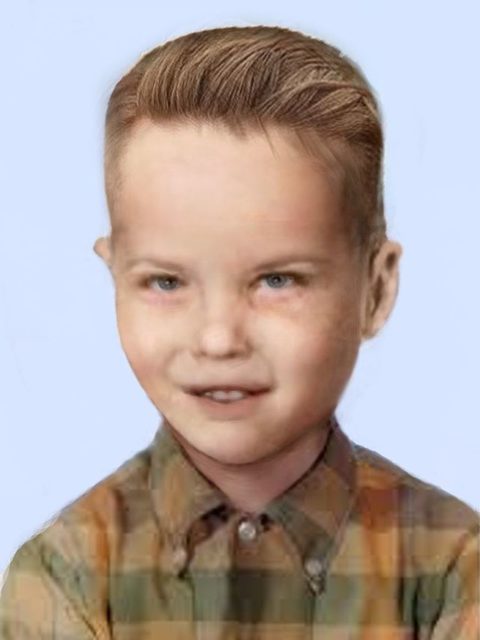 Artist’s rendering of how the Boy in the Box might have looked when alive. (Photo Credit: CarlK90245 / Carl Koppelman / Wikimedia Commons CC BY-SA 4.0)

The first theory states that the Boy in the Box was the child of Anna Marie Nicoletti, who resided at a foster home just 1.5 miles from the crime scene. She is said to have suffered from mental health issues, and while living at the home bore four children out of wedlock. Of those, three were stillborn and one died after being electrocuted outside a grocery store.

Those who support this theory believe the boy’s death was an accident caused by Nicoletti’s family not wanting the community to know she’d given birth outside of marriage. While this angle was looked into numerous times over the course of the investigation, no evidence was found to support it. As well, DNA testing later proved the child was not Nicoletti’s son. 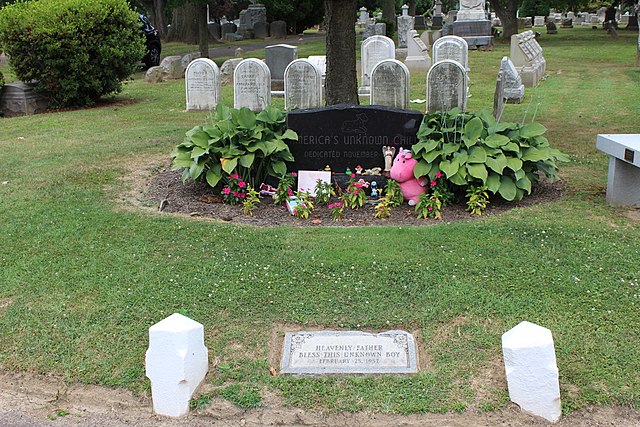 The Boy in the Box was reinterred at Philadelphia’s Ivy Hill Cemetery, where his grave is well-maintained. (Photo Credit: Dwkaminski / Wikimedia Commons CC BY-SA 4.0)

The second suggests the Boy in the Box was a victim of human trafficking and had suffered years of abuse as a result. Supported by Remington Bristow, this line of thought came from a Cincinnati, Ohio-based psychiatrist who contacted investigators after a patient named either “M,” “Mary” or “Martha” told her she wished to speak to them about the case.

According to M, her mother purchased the boy from his parents, after which he was subjected to abuse. One evening, he threw up his dinner and fell into a semi-conscious state. When M and her mother tried to clean him up in the bathtub, the boy died.

Needing to conceal the death, the pair traveled to the dumpsite in Fox Chase. While removing the body from the car, a motorist stopped and asked if they needed help, assuming they’d suffered a flat tire. M’s mother refused his offer and the man drove away, after which they hid the boy’s body in the brush. 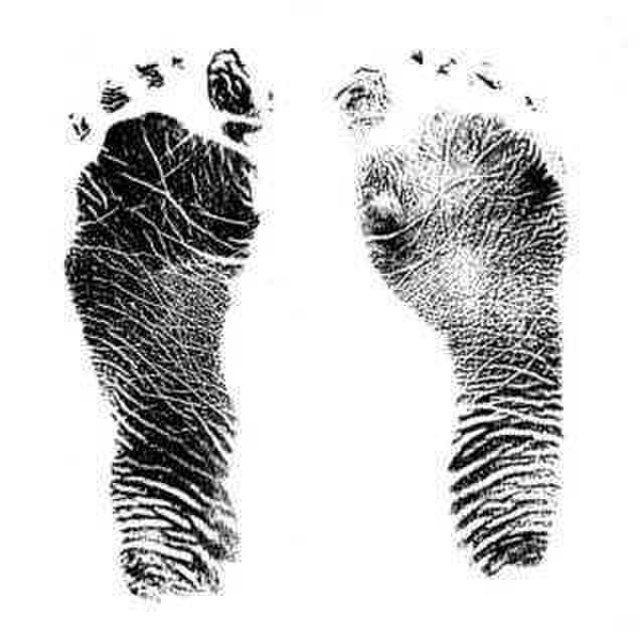 More from us: Lemuria: The Mythical Lost Continent That (Almost) Turned Out to Be Real

M’s story was supported by the statement from a man who claimed to have seen a mother and her child pull over in the area around the time the body was discovered. As well, the child’s wrinkled feet supported the theory that he’d been in a bathtub at the time of his death.

Despite the evidence pointing toward M’s story being true, statements from neighbors revealed that no boy had lived at their residence. In addition, upon her name being released by the media, M fled the country and has not been seen since. Just as her present whereabouts remain a mystery, so too does the identity of the child known simply as the “Boy in the Box.”