Vampires are an age-old phenomenon. They are the inspiration for many popular movies, books, and TV shows. While we know now that they are fictional beings, this wasn’t the case for people who lived hundreds of years ago. For them, vampires were a very real concern, and were a way for them to explain things that they otherwise wouldn’t understand such as failed crops or plagues.

The worry about vampires was so real, in fact, that people began specific vampire burial practices which modern researchers have begun to discover. Archaeologists working in a graveyard in Poland have found one of these supposed vampires buried there, showing the interesting way that people dealt with this threat in the 17th century.

The vampire panic in Europe began well before the 17th century. In Eastern Europe, specifically, the panic can be dated back to roughly between the 7th and 9th centuries, when many Slavic people converted to Christianity. Previously, Eastern Europeans had cremated their dead, believing this would allow the soul to be released. After missionaries converted them, the new practice of burying the dead began.

However, the act of placing bodies in the ground instead of burning them horrified some people, as there was a belief that “some people who died would claw their way out of the grave as blood-sucking monsters that terrorized the living.” 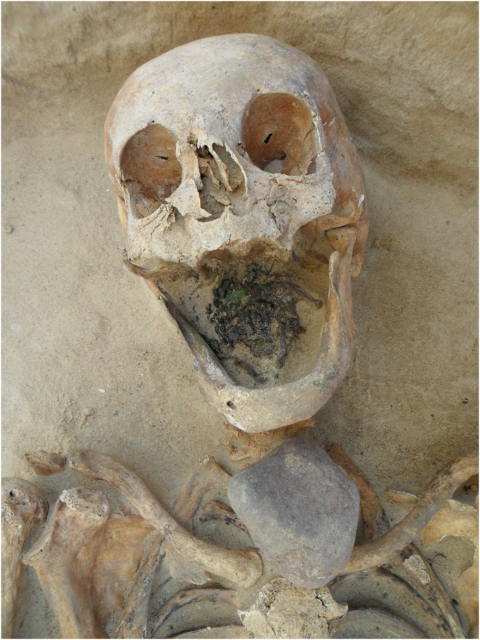 Skeleton similar to the one discovered in Poland, with a stone placed over the throat in an effort to prevent them from rising from the dead. (Photo Credit: Gregoricka via PLoS ONE/ CC BY 4.0)

Christopher Caes, a professor at Columbia University who has studied Slavic vampires, says these changing burial practices led to special rituals used to keep the dead in their graves. One of these tactics was to place a stone on the head to stop the corpse from rising.

Stopping the dead from rising

By the 17th century, the practice of vampire burials was commonplace around Poland. People handled their concerns in a variety of ways. One way to ensure that the vampires wouldn’t return was by “cutting off the head or legs, placing the deceased face down to bite into the ground, burning them, and smashing them with a stone.” 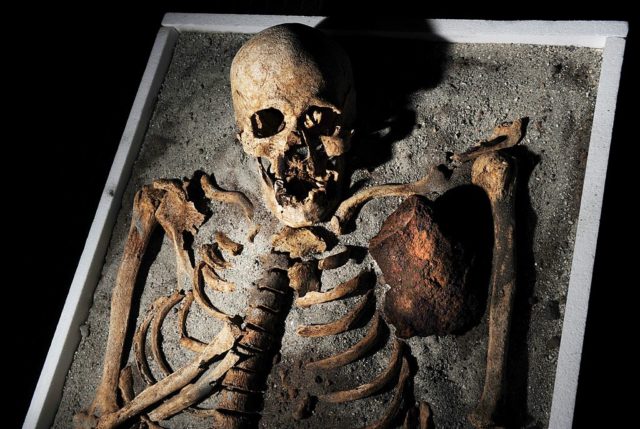 A similar skeleton to the Polish discovery, laying beside an iron piece. The body had been pinned down by an iron rod through the chest so he would not to turn into a vampire. (Photo Credit: Nikolay Doychinov/ AFP/ Getty Images)

Another burial method that was common at the time was to hammer a piece of metal through the skull of the alleged vampire after their death. It was believed that this would help make sure that the person who died didn’t come back as a vampire, and would remain in their grave. This new graveyard discovery, however, shows a different method of burying a vampire.

This discovery, made by a professor from Nicholas Copernicus University, Dariusz Poliński, showcases an unusual way of burying someone suspected of vampirism. The discovery was of a female ‘vampire’ in the village of Pien. She was buried wearing a silk cap, which researchers believe indicates that she had a high social status. She was also buried with a padlocked big toe, and a sickle against her neck. 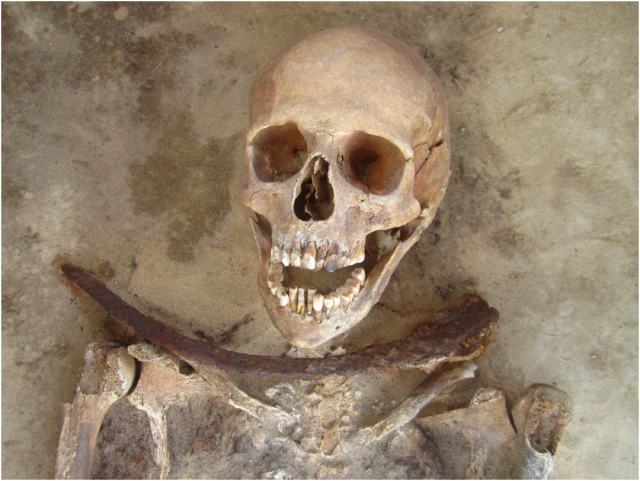 Skeleton buried in a similar way to the Polish discovery, with a sickle placed over the throat of the supposed ‘vampire’ to stop it from rising from the dead. (Photo Credit: Gregoricka via PLoS ONE/ CC BY 4.0)

The sickle was placed so that it would have injured, if not cut off the head, of the person who was buried if they had tried to rise. Poliński said that the padlock “likely symbolized the closing of a stage and the impossibility of returning,” and believed that it made the case stronger that she was buried as a suspected vampire.

More from us: Real-Life History Brought Us Dracula And Other Undead Favorites

This is not the only skeleton in the region that was discovered with a sickle over its neck, and there was another female with a sickle placed over her hips.