Extreme heat has some obvious consequences like health complications, forest fires, unusual weather events, and drought. With the intense heat the world has been experiencing recently, a variety of remarkable things have been revealed. Some are archaeological gold mines, and others are disturbing discoveries that might have been better left hidden. 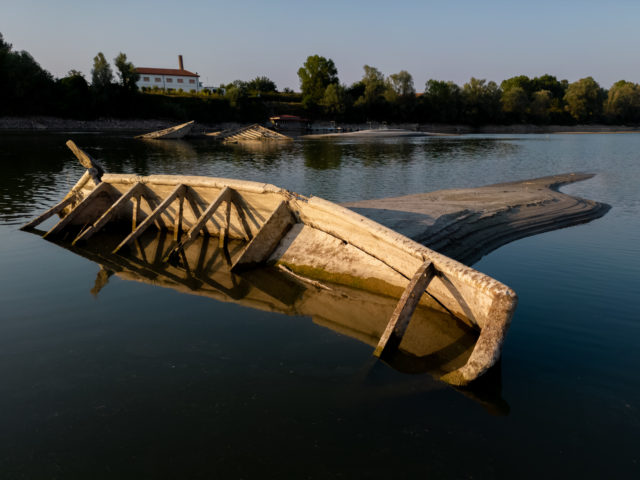 From the shoal of the Po river emerge the remains of wrecks of the Second World War on July 24, 2022, in Sermide, Italy. (Photo Credit: Emmanuele Ciancaglini / Ciancaphoto Studio / Getty Images)

With such a hot and dry summer, Italy experienced the most drastic drought it has seen in years. It was so dry that the country’s largest river, the River Po, dried up enough that residents of the area can actually walk across some expanses of the riverbed.

Along with the bottom of the river, a vessel called the Zibello, located near the central northern village of Gualtieri, has resurfaced. The sunken barge was used during the war to transport wood but sunk in 1943. Since then, it had remained underwater with just its bow barely visible under the water. Now, almost the entire 164-foot vessel has been revealed as the river has dried up.

While the drought has revealed a fascinating historic artifact, it has also threatened 125 communities along the river that rely on the water for farming in what is known as the “Italian food valley,” which is responsible for 40 percent of Italian food.

A bridge from the time of Emperor Nero 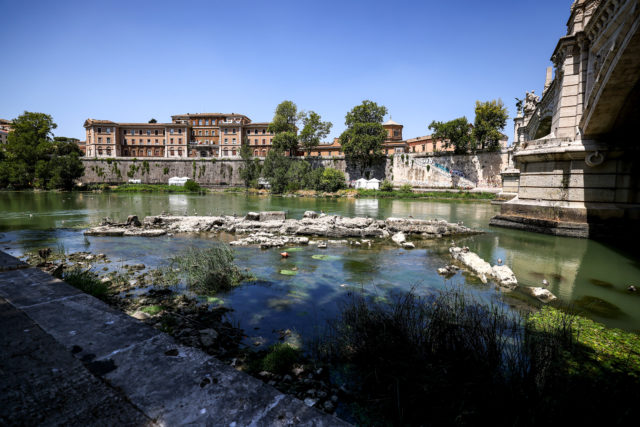 Along with the WWII vessel, many other things emerged as the Italian river system dried up. The Tiber river has also experienced critically low levels during the hot, dry summer, and the remains of an ancient bridge have been exposed.

It is believed that the bridge is in fact the Bridge of Nero, which dates back to the 1st century. This bridge fell into disrepair and was engulfed by the Tiber river, but it was once used to improve connections to Emperor Nero’s properties on either side of the river. 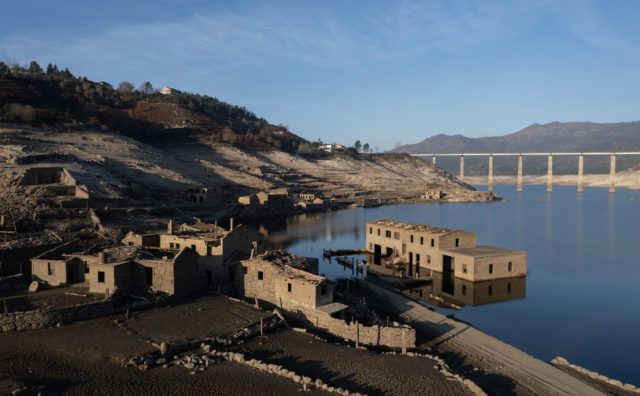 Building ruins, exposed by low water levels in the Alto Lindoso reservoir following drought, in Aceredo, Spain, on Sunday, Feb. 27, 2022. The Galician village of Aceredo was abandoned in 1992 and flooded to create the Alto Lindoso reservoir, re-emerging as the water levels of the Limia river dropped following drought in the region. (Photo Credit: Goncalo Fonseca / Bloomberg / Getty Images

In Spain, a village that was once flooded to make room for the Alto Lindoso reservoir has reappeared as a result of the drought in the extremely hot and dry summer. Aceredo disappeared underwater in 1992 and has now reappeared some 30 years later.

The reservoir has been reduced to just 15 percent of its capacity, so the structures of Aceredo village have been almost entirely exposed. Tourists and former residents of the village have been visiting the previously drowned area, seeing only an eerie outline of what remains.

José Luis Penín, a 72-year-old local who used to stop at the bar in Aceredo after a long day of fishing, fondly remembered the once-beautiful oasis: “The whole place used to be all vineyards, orange trees. It was all green. It was beautiful,” he said. 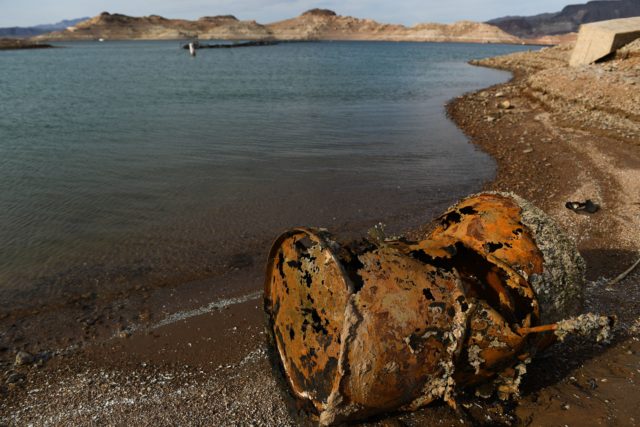 A rusted metal barrel, near the location of where a different barrel was found containing a human body, sits exposed on shore during low water levels due to the western drought at the Lake Mead Marina on the Colorado River in Boulder City, Nevada on May 5, 2022. (Photo Credit: PATRICK T. FALLON / AFP / Getty Images)

America’s largest reservoir, Lake Mead, has also experienced severe drought, revealing a number of disturbing things once hidden beneath the water’s surface. The reservoir has seen a drop of 27 percent of its capacity.

Some of the things discovered within Lake Mead include a sunken WWII era boat and a crashed B-29 aircraft that had been there since 1948. Most disturbingly, multiple human remains have been found at the reservoir, including a man who was found in a barrel. The local museum says he was the victim of a mob hit in the 1970s or ’80s.

A secret garden in England 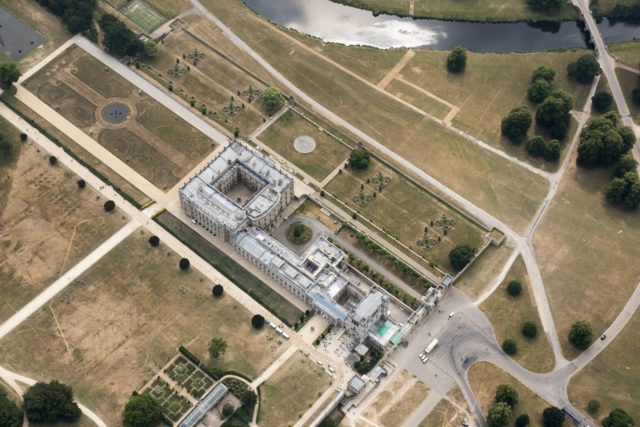 Located in Derbyshire, England, the Chatsworth House has recently revealed a hidden garden on the South Lawn of the estate dating back to the 17th century, courtesy of the extreme heat. The old design was replaced in 1730 but the shorter roots of the more recent grass caused it to burn more quickly. As a result, it’s exposed the previous garden pattern.

Called the Great Parterre, the garden was 473 by 227 feet and featured ornate patterns that can now be seen after almost 300 years. It was created to provide a whimsical setting for the 1st Duke of Devonshire’s newly completed South Front of the house, and what is left of it is still quite remarkable. The old garden was also exposed in a 2018 drought, pictured here.

An ancient city in Iraq 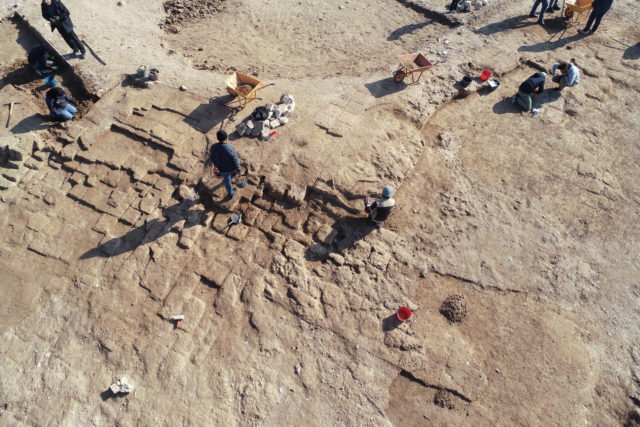 Iraq‘s Mosul reservoir, located on the Tigris river, has also experienced a serious drought resulting from the heat, but instead of disturbing remains, an archaeological marvel has been revealed. Ruins of an extensive ancient city have resurfaced which scientists have determined flourished under the Mitanni Empire from 1550 to 1350 BC.

During their excavations, archaeologists discovered ceramic vessels that contained more than 100 cuneiform tablets, and believe that the ancient city can help to better understand the fall of the Mitanni period and the rise of Assyrian rule.

BREAKING: The archaeological remains of an entire Roman fort, known as Aquis Querquennis, have been uncovered after water levels plunged at the As Conchas Reservoir in Galicia, northwest Spain. pic.twitter.com/A05Cjtaeoe

Even more Roman ruins were revealed in Spain as the severe heat dried up yet another reservoir. The As Conchas reservoir, created in 1949, had submerged ancient Roman ruins of a military complex that was being built along the Lima River in Galicia in around 75 AD.

Roman workers abandoned the military complex about a century later and what remained was a collection of neatly organized stone structures. A deteriorated wall encircles the structures, and the grand entrance has become partially collapsed.

More from us: This 1,200-Year-Old Shipwreck is Re-Writing History Books

The partial remains of pillar bases still stand, and a single archway reveals the strength of Roman engineering as it has proven stable against the weathering effects of time and water.