In 1870, 21-year-old Jacob Riis boarded a small boat from his hometown of Copenhagen, Denmark to Glasgow, Scotland. On May 18, he boarded the steamer Iowa with nothing but $40 donated by friends, his necessary immigration paperwork, and a gold locket with a stand of hair from his now lost love Elisabeth – whom he was forced to leave behind in search of a better life in America. Little did Riis know, he would come to capture the horrific lives of immigrants and impoverished families living in tenement housing and slums across New York with his camera. 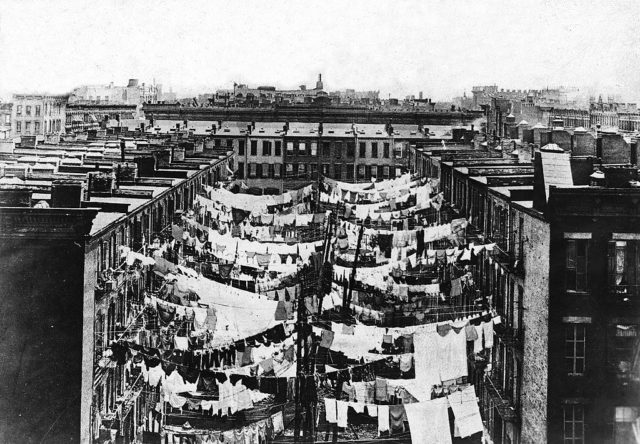 On June 5, Riis arrived in New York and became one of the 12 million people who immigrated to the United States between 1870 and 1900. What he likely saw while walking the streets of New York City for the first time was a stark contrast between the wealthy upper class and the cramped, filthy, and overcrowded dwellings of the Lower East Side. 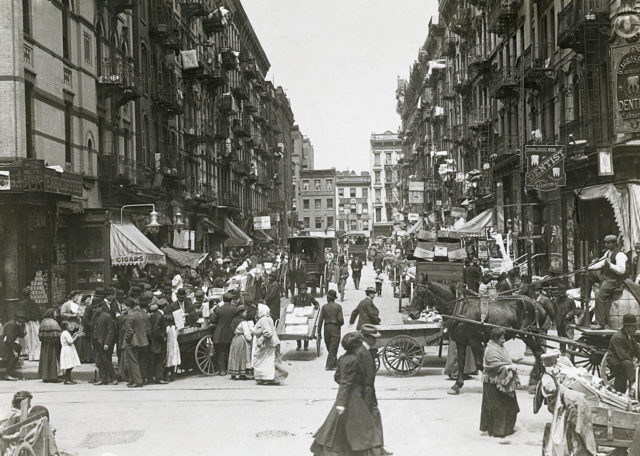 In the 1880s, over 300,000 people were crammed into a single square mile of the Lower East Side, making it the most densely populated place on the planet. Most of them lived in tenement apartments, in buildings that were in shambles with no indoor plumbing or proper ventilation. They were typically breeding grounds for disease and crime. 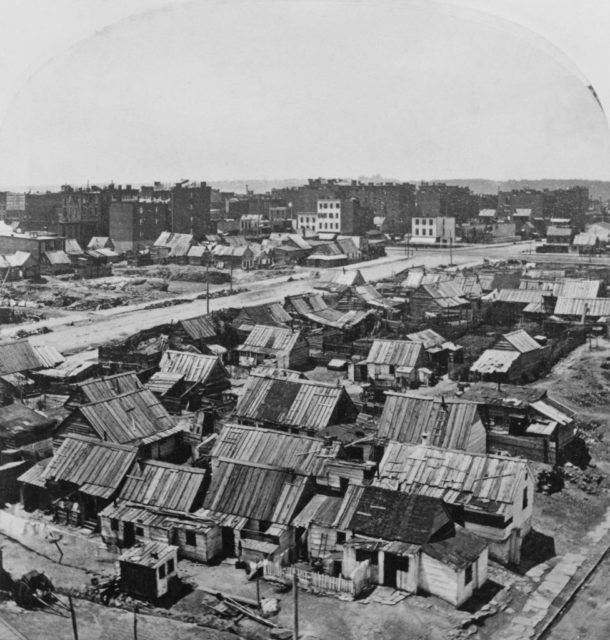 By 1900, 2.3 million people – roughly two-thirds of New York City’s population – were living in these tenement apartments. Many of the photos you see here were taken by Riis, who shed light on New York’s financial disparity when many preferred to keep it in the dark.

The rise of tenements 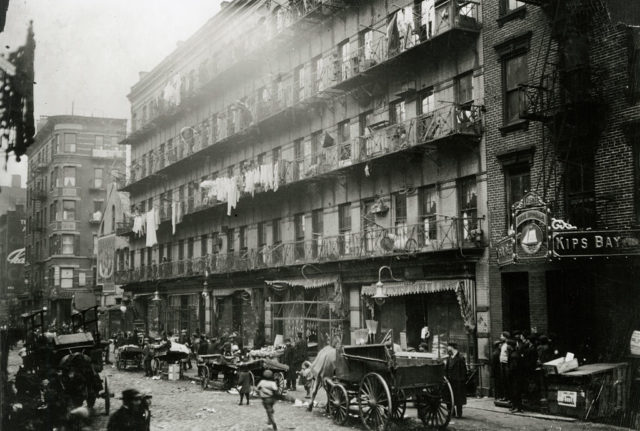 Hundreds of immigrant families do garment work for a living in tenement houses like this one on Elizabeth Street in Manhattan’s Lower East Side, 1912.  (Photo Credit: Lewis Wickes Hine / Library of Congress / Corbis / VCG / Getty Images)

Following the end of the American Civil War, a large influx of people moved into urban areas like New York City. Soon after, European immigrants began to arrive, fleeing disparity, famine, and war. At the same time, New York’s wealthier residents began to move north, out of the Lower East Side and into the Upper East Side – which is still regarded as one of the most lavish districts in Manhattan. 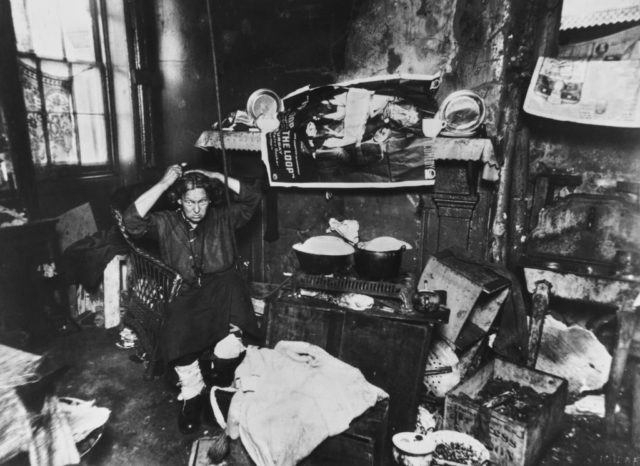 A woman sitting by the stove in the squalor of a tenement building in New York City, 1905. (Photo Credit: Bettmann Archive / Getty Images)

Mainly Irish and German immigrants arrived first, moving into converted row houses in the Lower East Side that took single-family homes and made them into multiple apartments known as tenements. Tenement buildings typically had five to seven stories. The apartments inside were small and the majority of them had no windows, natural light, or ventilation.

Newly constructed tenements also began to pop up throughout New York, typically made hastily with cheap materials. By 1900, more than 80,000 tenements had been built, housing roughly two-thirds of the entire city. 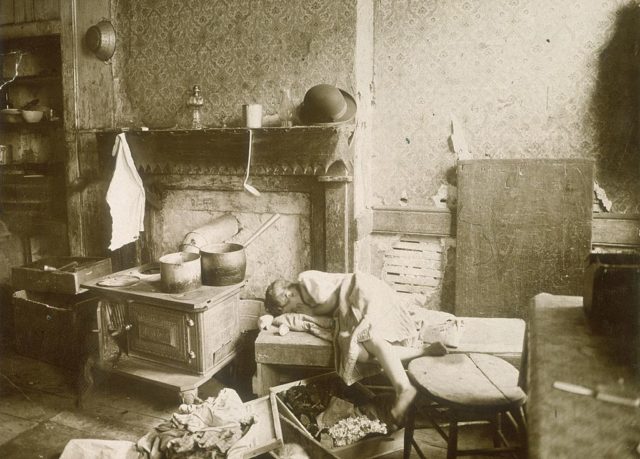 A child slumped over in a dilapidated tenement apartment on the Lower East Side of New York City, 1896. (Photo Credit: Museum of the City of New York / Byron Collection / Getty Images)

Many tenement residents lived in squalor. Families with many children were often allowed only one room, which was roughly 325 square feet. Legislation enacted in 1867 required that there be one privy or toilet per 20 people in tenements, and buildings typically only had one water tap in the backyard that provided every resident with the water they needed to bathe, cook, and do laundry. Infant death rates were as high as 1 in 10, and a lack of sanitation often meant diseases like cholera spread quickly. 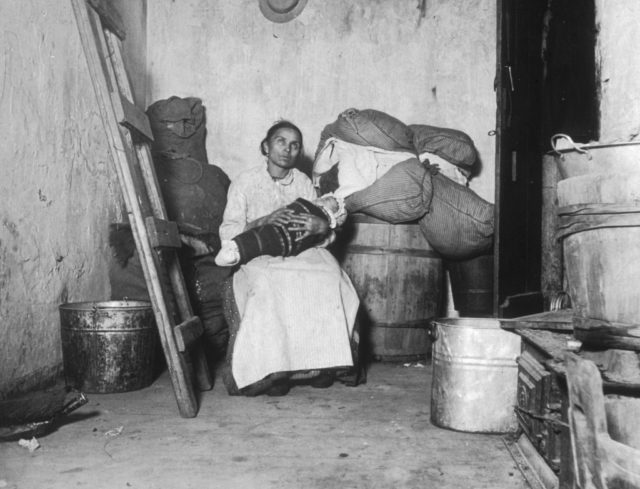 An Italian immigrant rag-picker sits with her baby in a run-down tenement room in New York City, 1887. (Photo Credit: Jacob A. Riis / Museum of the City of New York / Getty  Images) 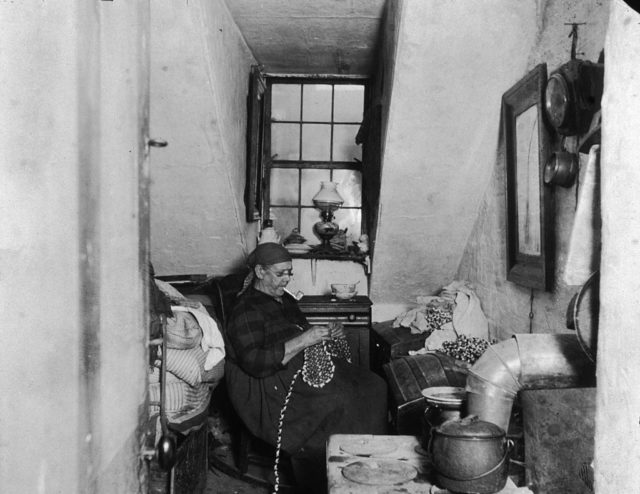 By the early 19th century, the industrial revolution was in full swing. Thanks to an influx of cheap immigrant labor, new businesses boomed throughout New York City. Steamboats allowed raw materials to be easily transported into the city, where shipyards, tanneries, refineries, and publishers all began to pop up. By 1825, New York’s garment industry was also incredibly lucrative. Many tenement buildings included labor stations and served as places where people worked and lived. 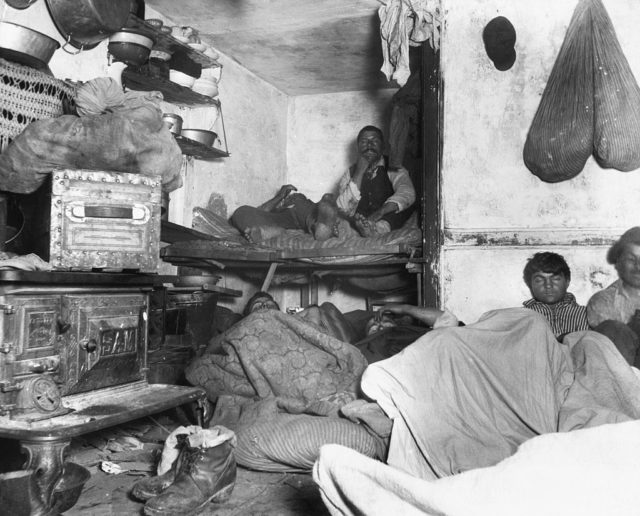 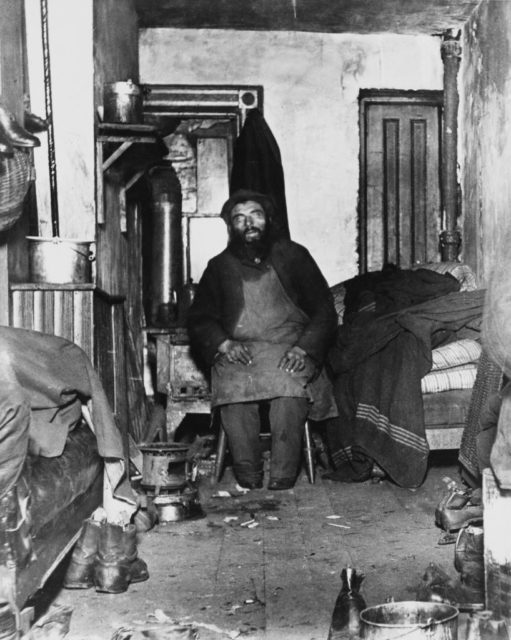 Workers, which often included children, labored long hours in one of the factories for low wages. If a family couldn’t afford to pay the $10 a month rent in the tenements, they’d be forced to take up residence in one of the nearby shantytowns made up of makeshift shelters and shacks.

Orphaned children were especially vulnerable and often ended up living on the streets. Orphanages were overcrowded since many parents opted to place their children in someone else’s care until they could afford to look after them. 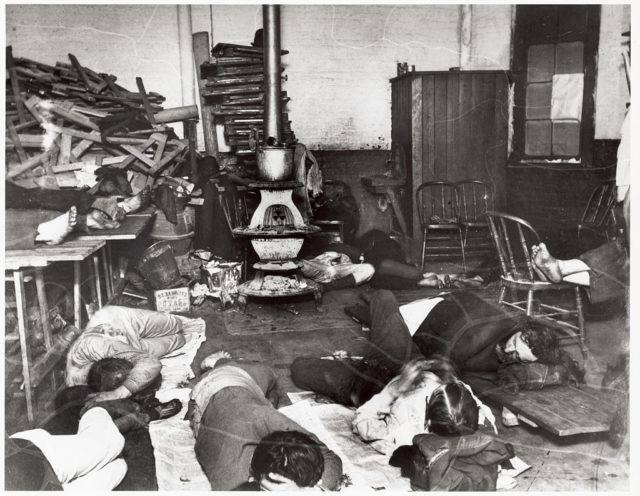 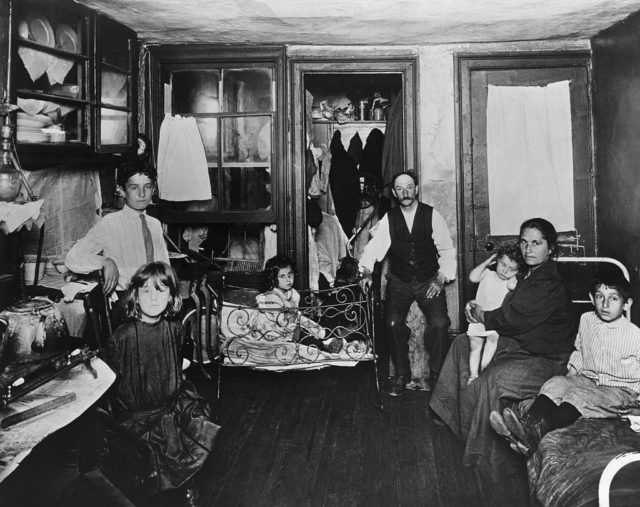 ‘How the other half lives’ 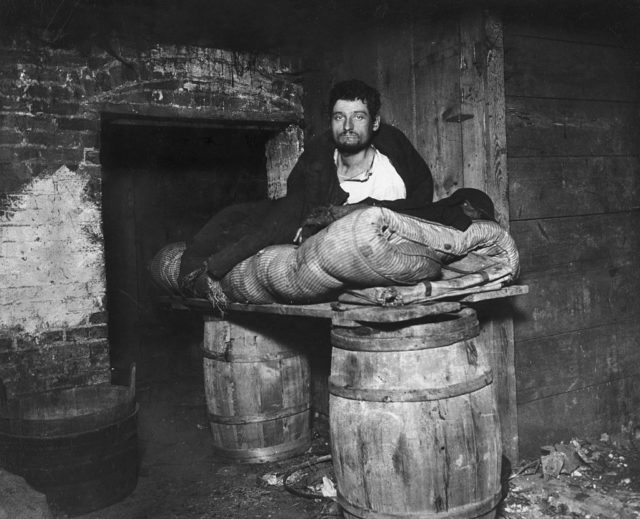 A homeless man in a Manhattan slum sleeps in the corner of a cellar, circa 1886. (Photo Credit: Bettmann / Getty Images)

Jacob Riis, the Danish immigrant, eventually worked his way up and found a job as a crime reporter for local evening publications. His job put him directly in the heart of New York’s grimy Lower East Side, where gangs ran rampant and poverty was around every corner. He began to capture what he saw on camera. As someone who had experienced similar hardships, Riis knew that what was happening to residents in the tenements at the hands of landlords was criminal. 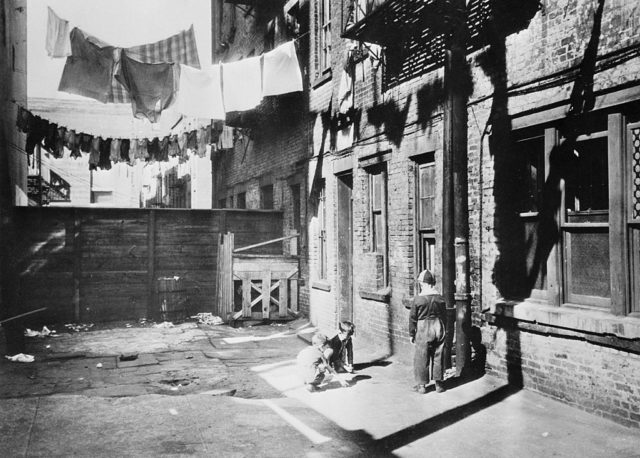 Children play with marbles in the alleyway of one of New York’s tenements. (Photo Credit: Bettmann / Getty Images) 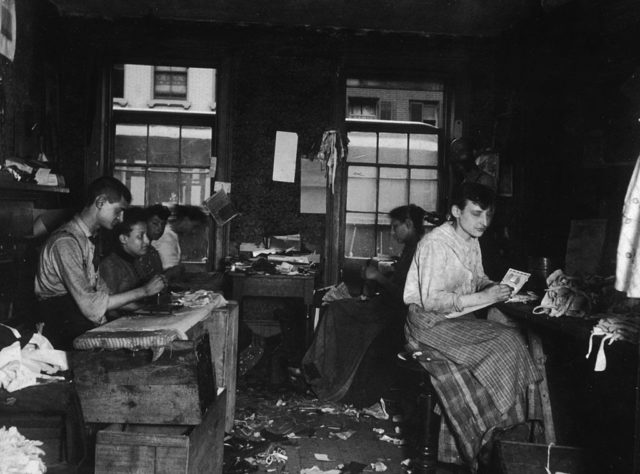 Men and women make neckties inside a tenement on Division Street, New York City, circa 1890. (Photo Credit: Jacob A. Riis / Museum of the City of New York / Getty Images)

Hoping to draw attention to the deplorable living conditions in the Lower East Side, Riis started researching and writing a book. Published in 1890, Riis’ book How The Other Half Lives included his magnetizing and haunting photos of life in the slums of New York. His work likely inspired two major studies released in the 1890s.

By 1901, city officials passed the Tenement House Law which outlawed the construction of new tenements built on the typical tiny 25-foot lots. The law also mandated improved sanitation, fire escapes, and access to light and ventilation. City authorities also began supervising new tenement buildings under construction to ensure the law was being followed – even by greedy landlords looking to cut corners. 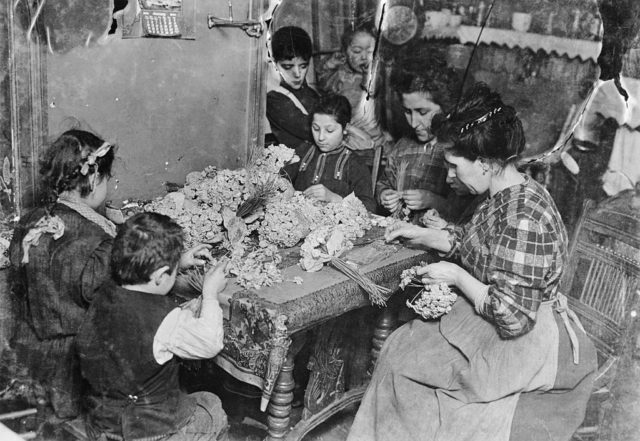 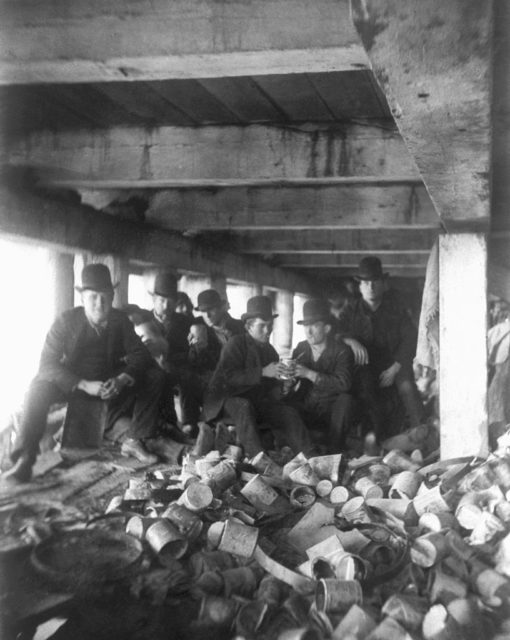 Members of the Short Tail Gang sit underneath a pier in the Corlears Hook area of the Lower East Side, circa 1890. (Photo Credit: Corbis / Getty Images) 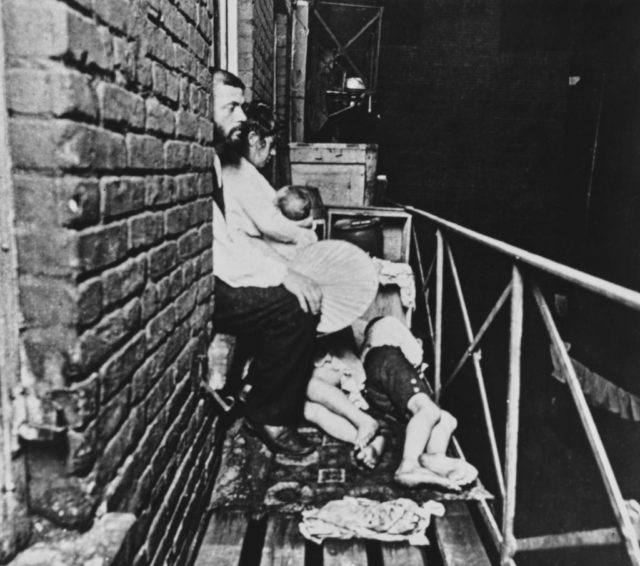 By the 1920s, subsidized affordable housing initiatives became more commonplace and the tenement system was ultimately abolished. New York City’s first fully government-built public housing project, called First Homes, opened in 1936, and many of the original tenement buildings were gutted and rebuilt to accommodate a higher standard of living. 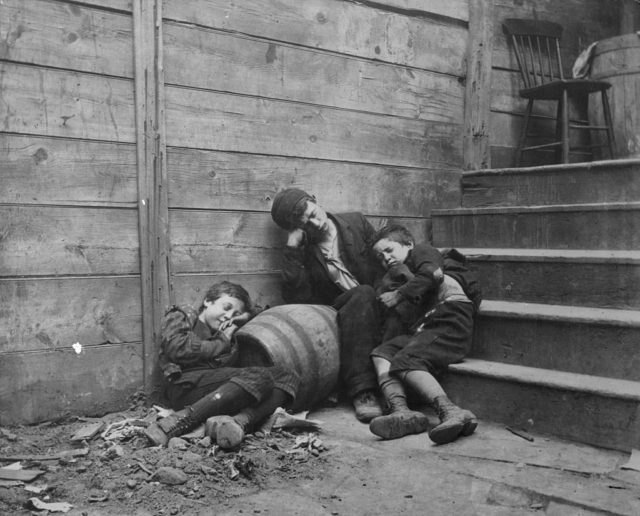 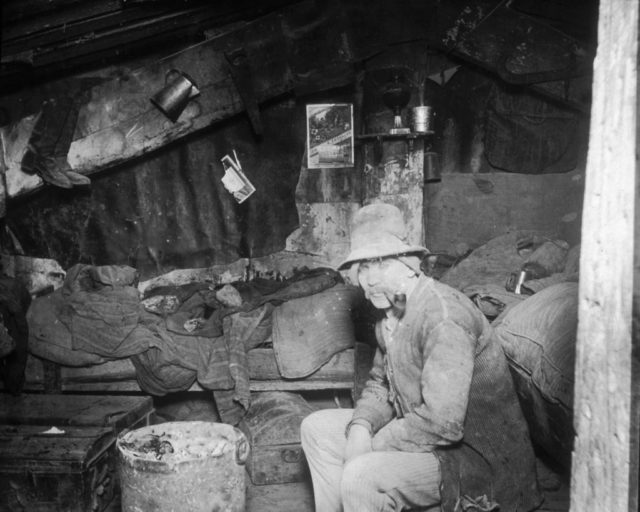 An Italian immigrant man smokes a pipe in his makeshift home under the Rivington Street Dump, New York City, circa 1890. (Photo Credit: Jacob A. Riis / Museum of the City of New York / Getty Images)

More from us: 8 Facts About The Twin Towers That Changed New York City’s Skyline

Today, many of the original tenement buildings are gone. But one, the Lower East Side Tenement Museum, continues to educate the public about what life was like for early immigrants. Reflecting on these once horrific living spaces is a reminder of how far we have come. It’s also a reminder that many people continue to experience homelessness and poverty even in some of Manhattan’s most glamorous boroughs.

« All Our Favorite Disney Castles Were Based on Real-Life Palaces
This Ancient Roman Emperor was Buried Alive – and His Wife Refused to Save Him! »