The Discovery of a 2,000-Year-Old Statue Might “Rewrite History”

As exciting as it is when new discoveries are made from the past by archaeologists, sometimes we’re left wondering just why they’re so important or historically significant – think of statues with missing body parts, or broken shards of pottery. A new find from an archaeological site in Tuscany, Italy is certainly showing just why these discoveries are so important, as researchers say it could “rewrite history.”

The discovery was made in the sacred baths of San Casciano dei Bagni which have been under excavation since 2019 as part of an effort to understand more about the history of the Etruscans and Romans. The area is of historical importance as it is the location of a series of natural thermal pools which were turned into the Balnea Clusinae, an ancient spa said to be founded by an Etruscan king. 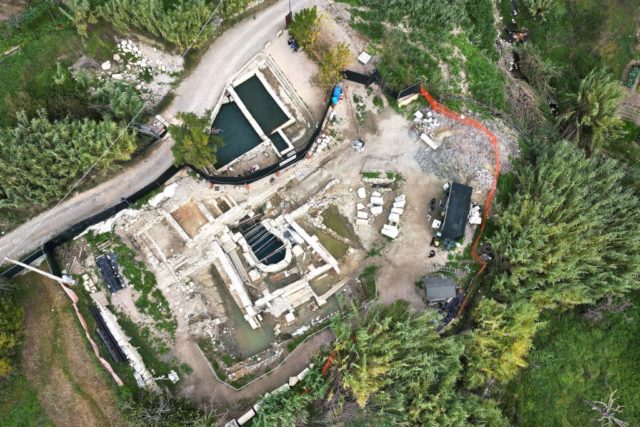 Aerial view of the thermal bath of the archaeological site where the 2000-years-old bronze statues were discovered at the sanctuary of San Casciano dei Bagni, in Tuscany, November 11, 2022. (Photo Credit: Andreas Solaro/ AFP/ Getty Images)

The Romans and other civilizations continued to use the baths until the early 20th century. It was underneath layers of mud within the baths that archaeologists found 24 statues, as well as ancient coins, buried and extremely well preserved. Among these statues was one built out of bronze nearly 2,000 years ago.

This discovery was a major moment for those involved in the dig and it’s being called one of the most significant finds in the Mediterranean since 1972. It was during this year that researchers discovered the Riace bronze warriors, two life-sized bronze statues created by the Greeks, in the sea in the south of Italy.

Archaeologists first knew to look for the statues at the Tuscan baths after coming across a series of hands protruding from the mud. As they continued their excavations, they uncovered the statues which were generally made in the likeness of ancient deities or other important figures. Among those which have been identified were a statue of Apollo – God of healing, archery, music, and arts, and Hygieia – Goddess of health. The statues are historically impressive for a number of reasons.

First, they make up the largest deposit of ancient bronze statues of their age to ever be discovered in Italy. Additionally, many statues from this era that were previously found were made of terracotta, whereas those found at San Casciano dei Bagni are bronze. In addition to the statues, the coins and other offerings that were located in the baths tell researchers that the area was likely only used by the wealthiest of the Etruscan and Roman families living in, or traveling to, the area.

So what is it about these statues that “rewrite history?” It all has to do with the historically difficult relations between the Romans and the Etruscans. The artifacts have been dated to the period when the region was transitioning from Etruscan rule to becoming part of the Roman Empire between the second and first century BC. This period was fraught with instability and difficulties between the two peoples.

The statues, however, give evidence that despite this unrest, both Etruscans and Romans would pray together at the thermal springs. One of the dig organizers, Jacopo Tabolli, said that “While there were social and civil wars being fought outside the sanctuary…inside the sanctuary the great elite Etruscan and Roman families prayed together in a context of peace surrounded by conflict.”

More from us: Cleopatra’s Long-Lost Tomb May Be at the End of This Mysterious Ancient Tunnel

Given the significance of the find, the Italian Ministry of Culture has already announced its plans to construct a new museum to house the artifacts.

« Jerry Lee Lewis Tribute at CMAs Enrages Many: ‘That Was Gross’
Bono Woke Up In the Lincoln Bedroom After Boozing It Up At the White House »