Phil Hartman’s Death: The Tragic End of an ‘SNL’ Legend

Saturday Night Live is one of the best-known comedy shows on television, having been on the air consistently since 1975. Yet for a show that focuses on comedy and lightheartedness, it has had more than its fair share of tragic deaths among its cast members, including John Belushi, Chris Farley, Gilda Radner, and of course, Phil Hartman. Although all these losses were heartbreaking, Phil Hartman’s death wass shocking for an entirely different reason.

Unlike the others, he was murdered. Read on to discover the tragic story behind Hartman’s death, which happened right at the peak of his comedy career.

Phil Hartman was born in Ontario, Canada on September 24, 1948. He lived in Canada until he was 10 years old, when his family moved to the United States. Attending California State University, Hartman graduated with a degree in graphic arts which he used to design album covers for bands until he transitioned into comedy. In 1975 he joined The Groundlings, an improv troupe, and helped his friend Paul Reubens develop the character Pee-wee Herman. Hartman also helped write the movie Pee-wee’s Big Adventure. 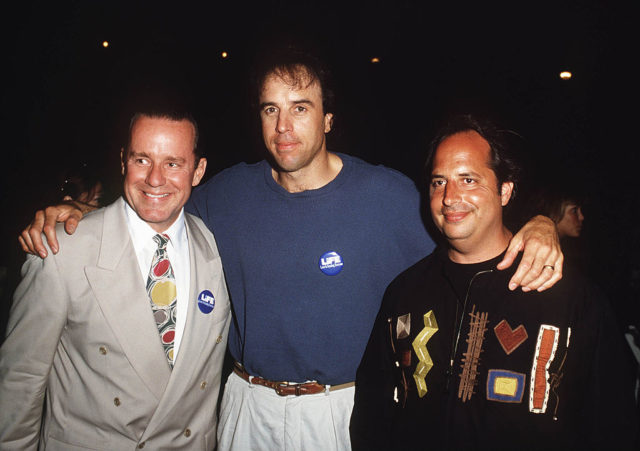 In these early years, Hartman had two divorces. He was married to Gretchen Lewis from 1970 to 1972, and to Lisa Strain from 1982 to 1985. Lisa later divulged to People magazine that her ex-husband was difficult to connect with, as he “would disappear emotionally…he’d be in his own world. That passivity made you crazy.” Nonetheless, the two remained friends.

Meeting his next wife

Shortly after his failed second marriage, Hartman met his future wife Brynn Omdahl, born as Vicki Jo, a model and aspiring actress. Mike Thomas, author of You Might Remember Me: The Life and Times of Phil Hartman, detailed the pair’s meeting and foreshadowed the disastrous outcome of their partnership. According to Thomas, their relationship started off on rocky ground and would only get worse. 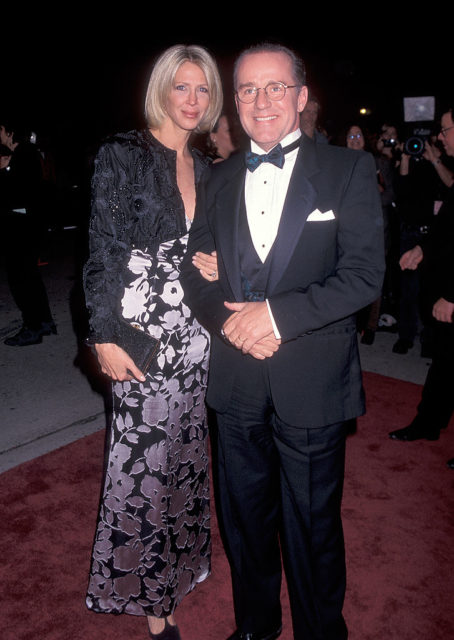 “When Phil met Brynn, he may well have been at his most vulnerable state in years – his second marriage’s ending had shaken him, and his performing career wasn’t taking off. Omdahl was strikingly beautiful, and the affections of a statuesque blonde may have bolstered Hartman’s deflated self-image.” The two evidently hit it off, as they went on to get married in 1987. They had two children together, Sean and Birgen.

It was in the early years of his third marriage that Hartman’s comedy career really took off. He was asked to join the cast of Saturday Night Live in 1986. He worked as both a writer and performer on the show until 1994. Hartman expressed to the Los Angeles Times that he joined SNL “because I wanted to get the exposure that would give me box-office credibility so I can write movies for myself.” He certainly earned it. 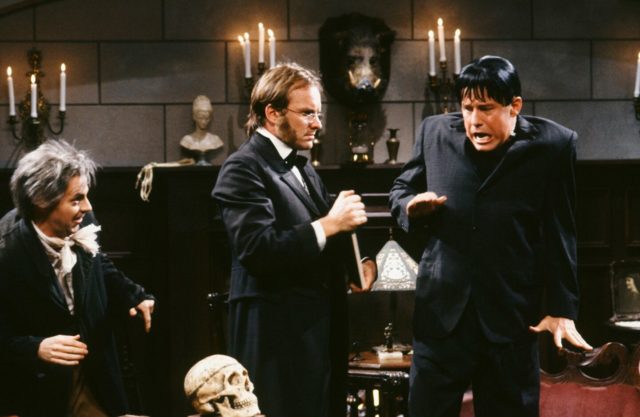 Throughout his time with the show, he played an impressive 70 original characters and became well known for his numerous impressions, the most famous of which was Bill Clinton. Hartman was also given the nickname “Glue” because, as explained by the show’s creator Lorne Michaels, “He kind of held the show together. He gave to everybody and demanded very little.” But like all actors on SNL, his time came to an end. He left to pursue other promising projects.

A future in Hollywood

Between leaving Saturday Night Live in 1994 and his death just four short years later, Hartman was involved with many different shows and movies. He continued working on The Simpsons, which he began in 1991. He voiced lots of the show’s characters like Lionel Hutz, Troy McClure, and Duffman. He greatly enjoyed working on the animated show. Biographer Mike Thomas quotes Hartman as saying The Simpsons was “…the one thing that I do in my life that’s almost an avocation. I do it for the pure love of it.” 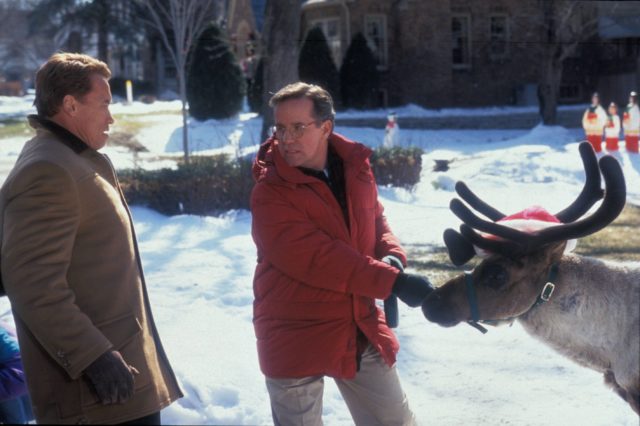 In addition, he took on the role of Bill McNeal, one of the stars of the 1990s sitcom NewsRadio. The show was very popular with critics, although less popular with audiences. Still, it was produced for five seasons – four of which Hartman was able to participate in.

While consistently involved with these two shows, Hartman also had appearances on The John Larroquette Show and 3rd Rock from the Sun. He worked on numerous movies, including Greedy, Coneheads, Sgt. Bilko, So I Married an Axe Murderer, Jingle All the Way, and Small Soldiers, to name a few. Yet while Hartman’s career was finally soaring, his marriage had reached an all-time low.

When Hartman and Omdahl first met she was sober, having struggled with drug and alcohol abuse in earlier years. Although it appears that she maintained her sobriety throughout most of Hartman’s time on SNL, the family had to move to California for his role on NewsRadio. This triggered Omdahl’s addiction. But even before this, she’d had many negative run-ins with Hartman’s friends and family. 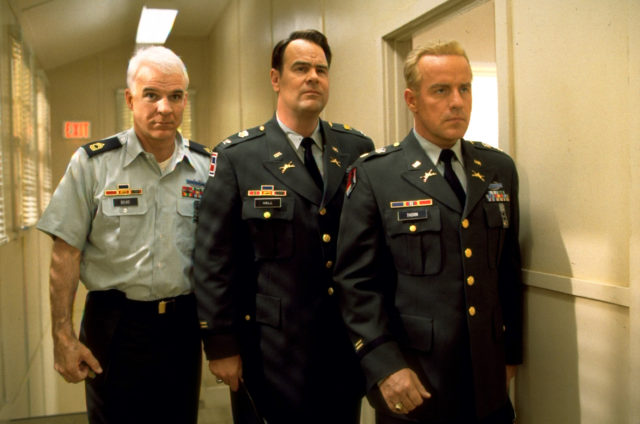 In one instance, she responded to a congratulations card from Hartman’s second wife with a death threat. Her response was a threat to “rip [her] eyes out” if she contacted Hartman again. Not only was Omdahl abusive to his friends and family, but it was reported that she was also abusive to her husband. During Hartman’s time on NewsRadio, fellow castmate Joe Rogan tried to get his friend to leave his wife no less than five times. Harman refused because he cared about her and their family.

Despite all the red flags and Omdahl’s continued erratic behavior, the world was shocked to hear about Phil Hartman’s death on May 28, 1998. He was killed in the early hours of the morning. The evening before, Brynn had been out for dinner with Christine Zander, one of the producers and writers from SNL. When she got home, she and her husband had a big argument and Hartman went to bed.

After taking Zoloft, cocaine, and alcohol, Omdahl went into the bedroom at 3:00 am and shot Hartman three times. In shock from what she’d just done, she went to the house of Ron Douglas, a lover. Some reports say that she had been at his house earlier in the evening before returning home to Hartman. Omdahl told Douglas that she had killed her husband, but it wasn’t until the murder weapon fell out of her bag that he became concerned. 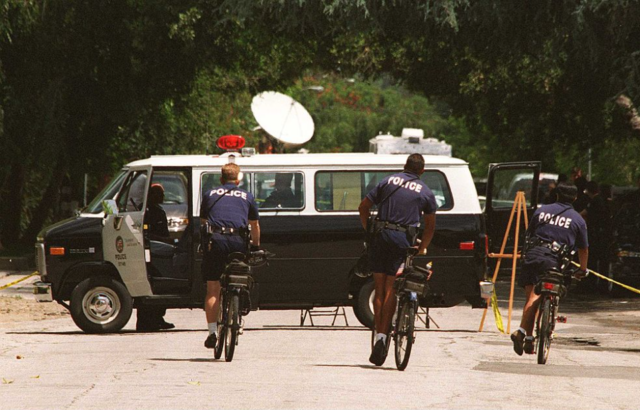 A Police command post outside the home of Phil and Brynn Hartman shortly after their deaths, 1998. (Photo Credit: John Chapple/ Getty Images)

The two of them traveled back to the couple’s house, where Douglas found Hartman dead in bed. When he went to call the police, Omdahl ran into the room with her dead husband and locked the door. The couple’s children remained unharmed and when the police arrived, the kids were removed from the building. It was while officials were removing the second child that they heard a gunshot go off. Omdahl had shot herself.

Following Phil Hartman’s tragic death, he was remembered very fondly by the many individuals he’d worked with on Saturday Night Live and other productions. Many recalled what a happy and kind individual he was, as well as what a talent he had for comedy. He is regularly regarded as one of the best SNL cast members in the show’s history, with Rolling Stone ranking him at number seven out of all 141.

« Linda Ronstadt Can’t Sing Aloud Anymore, So She Sings in Her Head
Phil Hartman: The Tragic End of an ‘SNL’ Legend »