Stuckie the Dog Was Found Mummified Inside a Tree

In the 1980s, a dog was found mummified inside a hollow chestnut oak tree, preserved there for nearly 20 years before it was found. Whose pet it was, how it got there, and how it was so perfectly preserved inside the tree have not been definitively verified, but there are some hints to the history of “Stuckie” the dog.

Loggers were cutting trees for pulpwood 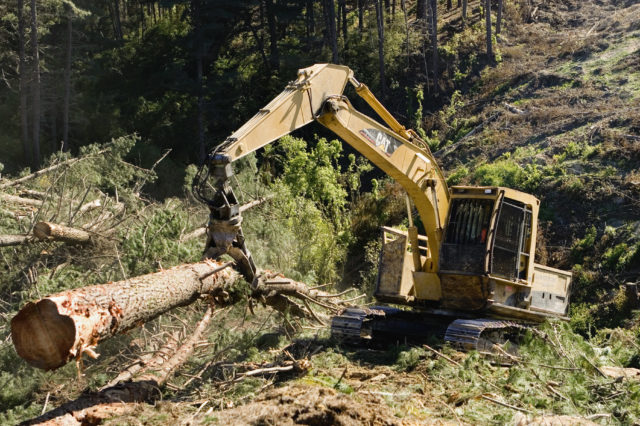 A crew of loggers working with the Georgia Kraft Corp. in the ’80s was tasked with cutting down trees along the border of Alabama and Georgia to harvest pulpwood. During their work, the crew chopped down trees over 30 feet in height. The loggers could not transport trees at full length and instead had to cut them into seven-foot logs.

Once the logs were cut down to the right size, the workers would stack the tree sections into their trucks for transportation. After they were loaded into the trucks, crew members would perform routine checks to make sure that everything was loaded properly. During one inspection of logs, an unnamed crew member made an incredible discovery.

They made an incredible discovery 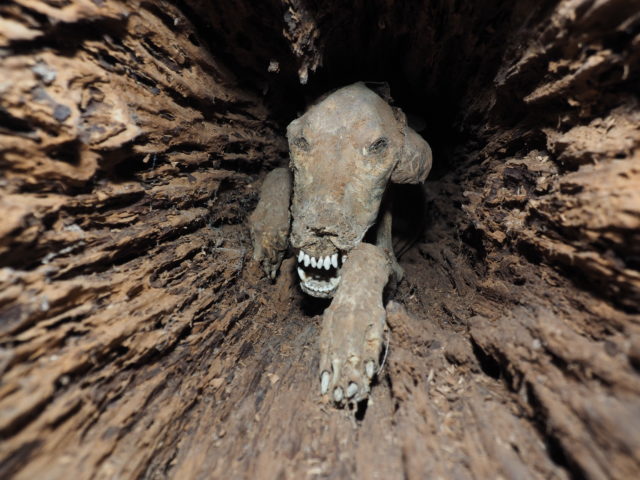 “Stuckie” the dog was perfectly preserved inside a chestnut oak, found by a logging crew in the 1980s. (Photo Credit: Michael Lusk / Flickr CC BY-NC 2.0)

The story of the incredible discovery has been retold by Bertha Dixon, the owner and director of Southern Forest World Museum in Waycross, Georgia. She met the crew member who made the discovery but was too astounded to remember his name. His story, however, was too remarkable to forget.

As the crew member walked around the log-filled truck bed, he noticed something peeking out of the top of one of the tree sections. It looked like there were animal claws emerging from the center of the hollow tree, and as he approached it, he saw a dog baring its teeth at him.

At first, he didn’t notice that the dog was long dead, but as he looked closer he realized that the dog stuck in the middle of the hollow tree section was perfectly still. It was preserved – mummified right inside the tree.

It’s amazing that the mummified pup remained intact during the entire logging process. Located 28 feet up inside the tree, the dog’s preserved body miraculously escaped being cut up by the saws sectioning off the tree. In fact, there is only a small area between where the loggers cut the tree and where “Stuckie” the dog’s paws are resting. Additionally, Stuckie ‘survived’ the fall of the tree section and the rough transportation to the truck bed.

How did Stuckie the dog get in the tree? 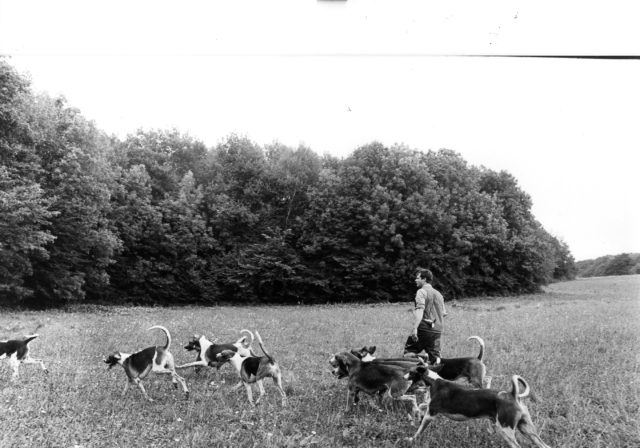 It is believed that when Stuckie the dog was alive, he was a coon hound – a scent hound that would hunt raccoons. One day sometime during the 1960s, Stuckie went on a wild chase far from his owner to hunt a raccoon. During this chase, the raccoon must have entered the base of the tree and scurried up the hollowed inside. Stuckie followed the raccoon inside the tree. But as he climbed up trying to capture the raccoon, the tree became narrower and narrower until the dog became stuck.

Considering the height at which he was jammed inside the tree, it seems unlikely that any of Stuckie’s cries would have been heard from outside. As well, during the ’60s, there were no methods of tracking lost dogs. Dog tags were not common and many dogs didn’t even have a collar. A local raccoon hunter believes that Stuckie the dog previously belonged to Keith Robinson. Robinson was known for hunting in the area and had lost a dog around the same time Stuckie is believed to have died. He spent weeks searching for him but with no luck.

How was Stuckie the dog so well-preserved? 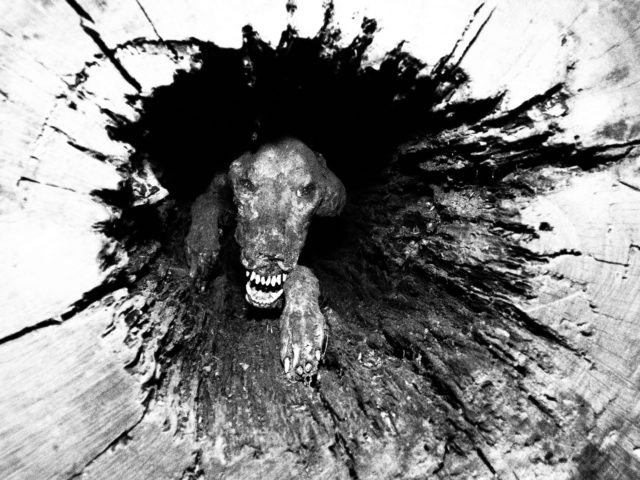 Stuckie became wedged inside the tree and was unable to free himself, ultimately dying inside the tree that later preserved him for decades. (Photo Credit: Michael Lusk / Flickr CC BY-NC 2.0)

So how is it that Stuckie was preserved in such a meticulous state despite being dead for over 20 years at the time of his discovery? Well, the nature of the tree, as well as the way in which he became stuck, both contributed to his natural preservation.

The tree Stuckie found himself wedged inside was a chestnut oak tree. Chestnut oak trees have tannins that are commonly used for taxidermy and the treating of animal pelts to prevent decay. This was surely a major factor in the mummified pup’s preservation.

Additionally, the way he was stuck helped keep things nice and dry inside the tree. “A chimney effect occurred in the hollow tree, resulting in an upward draft of air,” explains the exhibit card accompanying Stuckie the dog’s display. “This caused the scent of the dead animal to be carried away, which otherwise would have attracted insects and other organisms that feed on animals.” It also helped move moisture out of the tree and keep the inside dry enough to mummify the dog.

He was put on display in a museum 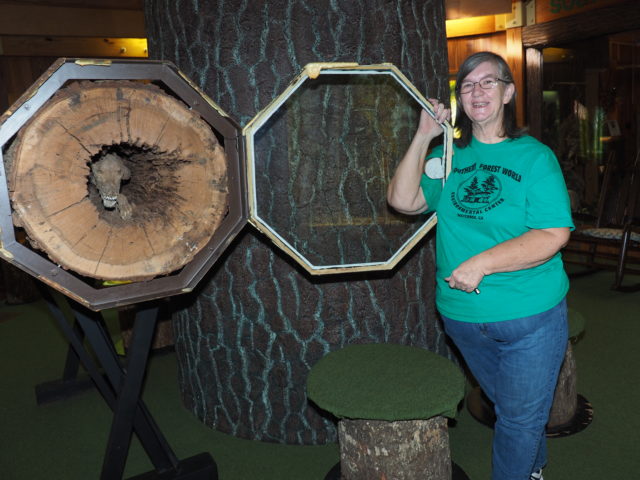 The loggers who found Stuckie the dog decided to donate their unique discovery to a local museum. Stuckie has been on display at the Southern Forest World Museum since the 1980s, but has only recently received worldwide recognition. In 2018, photos of Stuckie inside the hollow tree went viral online.

Many people who had never heard of Stuckie the dog were unconvinced that the photos circulating the internet were real. However, the Southern Forest World Museum does indeed have the perfectly mummified dog on display baring its teeth at visitors.

How he earned his name 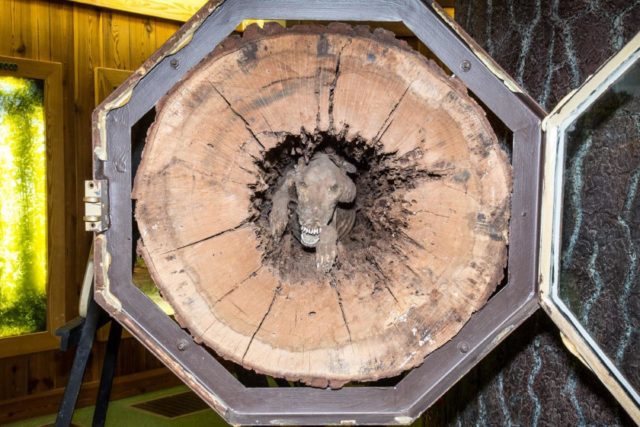 Stuckie the dog has been preserved inside the tree for approximately 60 years now. (Photo Credit: Eltorodelmexico / Wikimedia Commons CC BY-SA 4.0)

Stuckie the dog was obviously not always named Stuckie. Robinson, his believed owner, likely had a very different name for his coon hound when the dog was still alive. However, when the museum came into possession of the unique discovery, they were unsure what to name the mummified pup.

More from us: Haast’s Eagle: The Extinction of a Prehistoric Predator

The museum decided to take suggestions from the public and vote on the best name for their new exhibit. That’s how Stuckie the dog received his name.