At the 2003 Critics’ Choice Awards, the legendary Jack Nicholson was lined up alongside his fellow nominees. When he got to the podium, however, he realized that he was too stoned to give his acceptance speech. Instead of giving up, he asked Robin Williams to come down and do it for him. What happened next was entertainment gold.

Nicholson’s award was for his role in the 2002 film About Schmidt, in which he played the title role of Warren R. Schmidt. The film follows Schmidt’s life after he retires from actuarial work. With all his newfound time, he decides to sponsor a young Tanzanian boy named Ndugu Umbo and sends him multiple letters. Meanwhile, he takes off in his new RV to try and stop his daughter from marrying a man he doesn’t approve of. 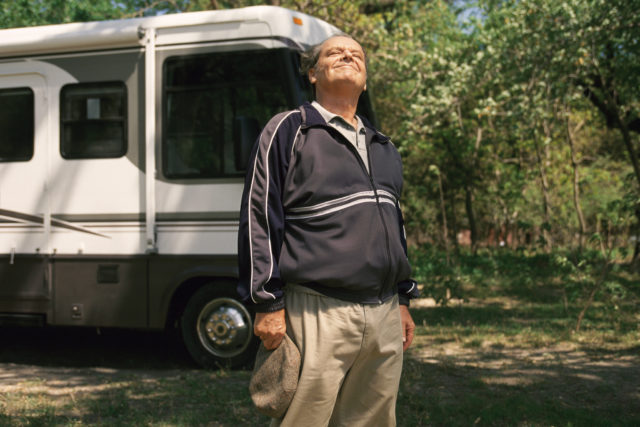 The film was a fantastic success with both general audiences and critics. It was produced on a budget of $30 million and managed to earn a whopping $105.8 million. For his role, Nicholson was nominated as Best Actor at the Academy Awards, British Academy Film Awards, and Golden Globe Awards. It was his nomination and subsequent win at the Critics’ Choice Awards, however, that was the most memorable.

The Best Actor winners were announced by actress Salma Hayek. Nominees Daniel Day-Lewis, Nicholson, and Williams went up to the stage. Hayek said there was a tie for Best Actor. “I’m going to call the first name,” she announced. “This wonderful person can come up here and say thank you, and then I will say the second name, so there’s going to be so much dramatic tension.”

Hayek called Day-Lewis as the first winner for his role in Gangs of New York before calling up Nicholson as the second winner, leaving Williams, nominated for One Hour Photo, on stage. Day-Lewis gave his thanks with little issue, but then it was Nicholson’s turn. 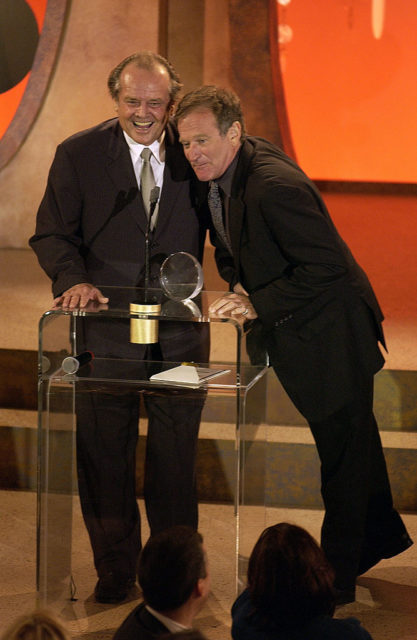 Up until this point, he’d been wearing sunglasses. When he approached the podium and took them off, it became evident to the audience that he was extremely stoned. If there was any doubt, he proclaimed, “Well, I don’t usually get this baked when it’s on television,” while trying to stumble his way through the speech. Instead of pushing through, he said “Robin, would you come up and give…Would you give the funniest acceptance speech I ever gave?”

Williams, ever the comic, certainly didn’t disappoint. He put on his best Jack Nicholson accent and began, “What Jack is trying to say here… is he’s so happy to be here he could drop a log. Right now, he wants to thank Jeffrey Katzenberg for the lens.” Eventually, Nicholson came around and was able to function enough to banter back and forth with his savior, making for quite an entertaining evening.

More from us: Sally Field’s Surprising Reveal About Her Worst On-Screen Kiss

Nicholson jumped in after thanking Katzenberg, adding “And the seats,” which Williams rolled with. “And the seats…Hopefully, Shaq kicked his [butt] tonight, but Jack, say it more because you’re dressed up tonight and wearing the sunglasses inside works even better.” Needless to say, recounting the event doesn’t do it justice. The video of the chaotic 2003 Critics’ Choice Awards is a must-watch.