While excavating a previously undisturbed ancient Egyptian tomb at Qubbat al-Hawā, archaeologists discovered 10 mummified crocodiles. Although it was common for animals – crocodiles included – to be embalmed and buried, there was something unusual about these. The unique method of mummification used raised many questions among the researchers who found them.

The practice of mummifying animals was extremely common in ancient Egypt. Animals were revered as both pets and religious symbols, explaining why the effort was made to preserve them. The primary reasons for mummification were related to Egyptian beliefs surrounding the afterlife. For starters, animals were preserved simply so that an owner could keep one of their favorite pets when they both passed on. 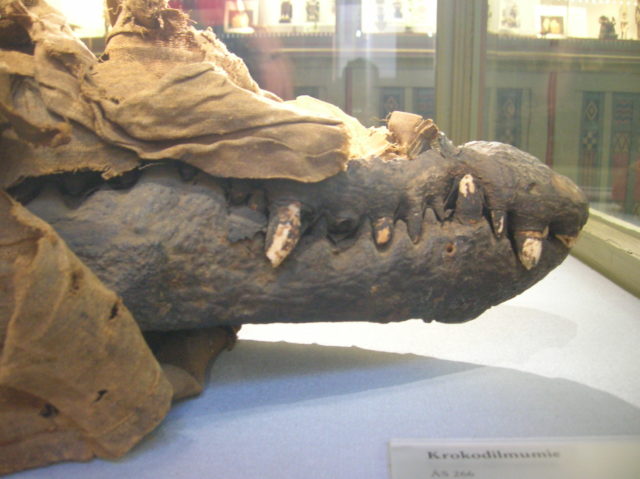 Other reasons included the animal being a source of food in the afterlife, being an offering to a specific god, or because some creatures were seen as representations of their gods manifested in a physical form. Crocodiles were one of these animals. The Egyptians would raise them to be honored and doted upon up until their death. At this time they’d often be mummified to honor the gods Sebek, who appeared as half man, half crocodile, and Re (Ra), the sun god.

The Qubbat al-Hawā archaeological site, located on the Western bank of the Nile River, is believed to have been a tomb made for priests or nobles. Excavations first began in 2008 on these ruins which are considered one of the most densely filled cemeteries of ancient Egypt. The crocodiles were discovered years later in 2019. Five of them were full mummies while the other five were decapitated heads. It wasn’t until a 2023 study was published that researchers came to know more about the mummies located at Qubbat al-Hawā. One of the most interesting observations is that while most crocodiles were embalmed using linen bandages and bitumen, a process that limits the ways that they can be studied, these 10 were absent of both. This made it far easier to assess various parts of the animal.

After conducting studies, researchers discovered that these mummies were prepared for burial unlike any other that had previously been found. Instead of removing the intestines and embalming the animals with bitumen and linen wrappings, it appears as though they were simply buried in the sunny sand so that they could dry out naturally. Once this process was complete, the crocodiles were wrapped up and placed into the tomb they’d been prepared for.

An aerial view of one of the complete crocodile specimens found at Qubbat al-Hawā. (Photo Credit: De Cupere et al., 2023 / PLOS ONE / CC-BY 4.0)

These are all clues as to the age of the creatures, which have been dated to before 300 BCE during the Ptolemaic age. It’s believed that the crocodiles were quite large, between 5.9 and 11.5ft according to their bone length. Not only is their embalming unusual, but some of the mummies were also West African crocodiles which no longer exist in Egypt. One mystery that remains is how each of these creatures was killed, as there are no obvious signs that provide an answer.

There are, of course, many ways that it could have been done which wouldn’t leave a detectable trace. Above all else, the researchers working with these crocodiles believe that this incredible discovery will help them piece together how animal mummification changed through time.