When we think of flying today, we often think of cramped spaces, crying children, and long security lines. However, this wasn’t always the experience. During the golden age of flying, airplanes were a luxurious experience for passengers, offering comfortable sleeping options, delicious meals, and lots of space to stretch your legs. We have found some vintage photos of airplanes from the 1950s, 1960s, and 1970s that make us wish we could experience flying in style like this! 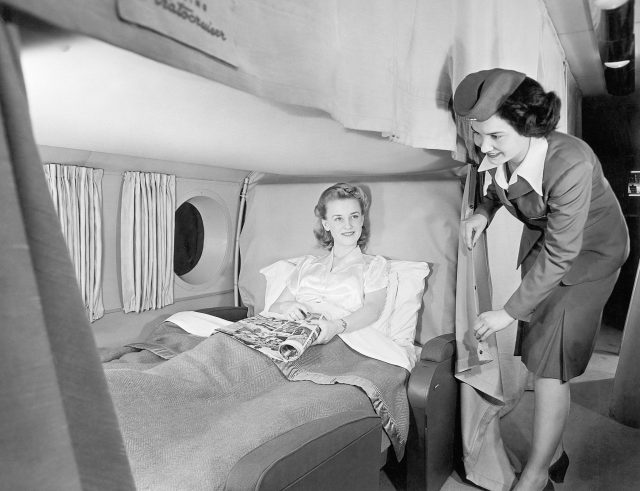 During the 1950s, some airplanes offered sleeping accommodations for intercontinental flights. Different types of planes, including Boeing Stratocruisers (pictured above), Lockheed Constellations, and Douglas DC-6s offered luxurious sleeping options for their passengers. 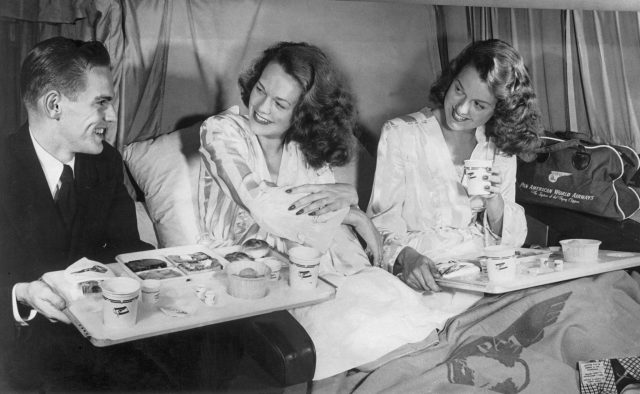 Two women getting breakfast in bed on board a Clipper of Pan American Airways during a crossing of the Atlantic, around the 1950s. (Photo Credit: Keystone-France/ Getty Images)

Sleeping on planes was much more comfortable back then than it is today. Passenger planes in the 1950s often offered upper and lower berths with mattresses and sheets, Pullman-style curtains for privacy, windows, reading lights, and sometimes even breakfast in bed (as pictured above). Not all passenger planes offered this type of sleeping accommodation, as seen below. Even so, these passengers still receive a bigger blanket than we do on flights today. 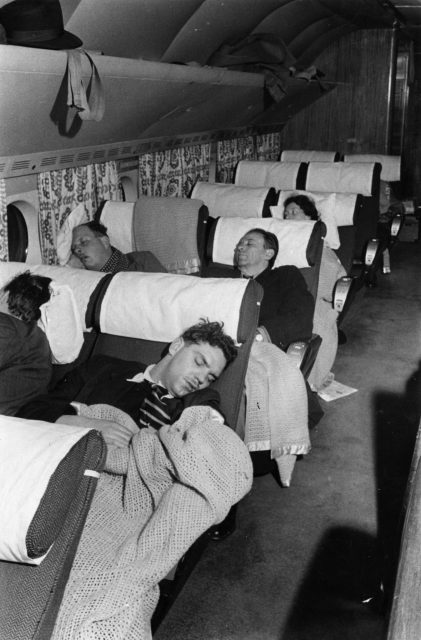 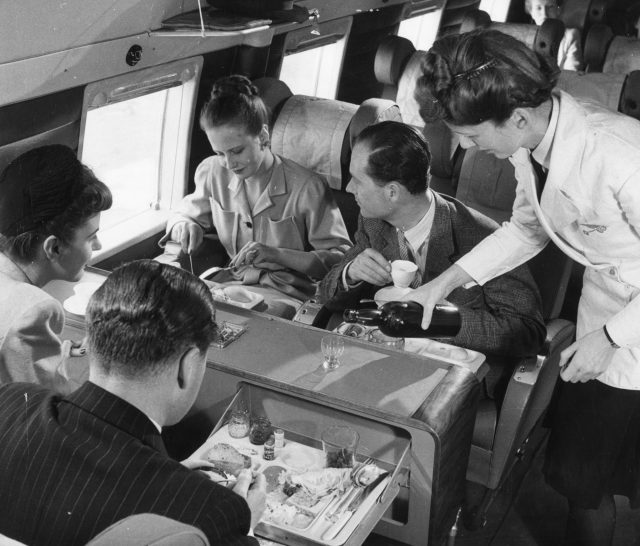 Today, airplane food isn’t always the most appetizing, but that hasn’t always been the case. As planes grew in size, so did the amenities associated with them- including the food served to passengers. By the 1950s and 1960s, the inflight food offered to passengers was really quite swanky. 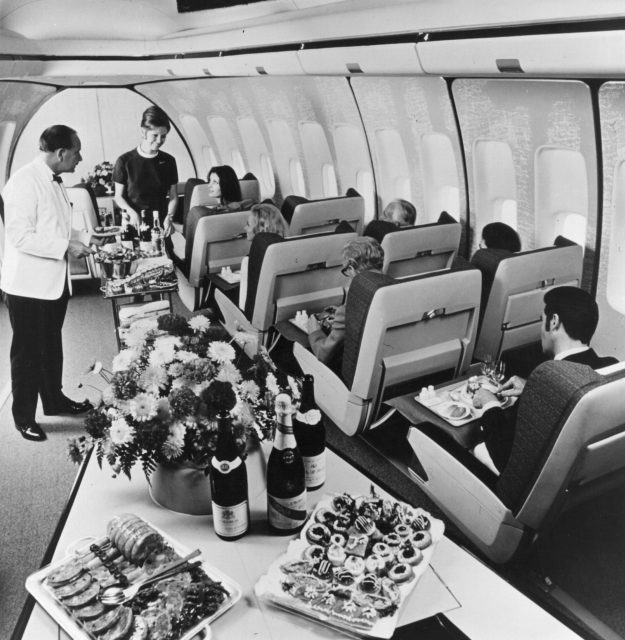 As aircraft became larger in the 1950s and 1960s, there was more storage space, meaning that serving styles became more elaborate. Airline crews would roll covered trolleys stacked with fresh salad down the aisles, while charcuterie and different meats would be cut in the middle of the aisle for passengers to see. Lobster was a featured food on many flights. 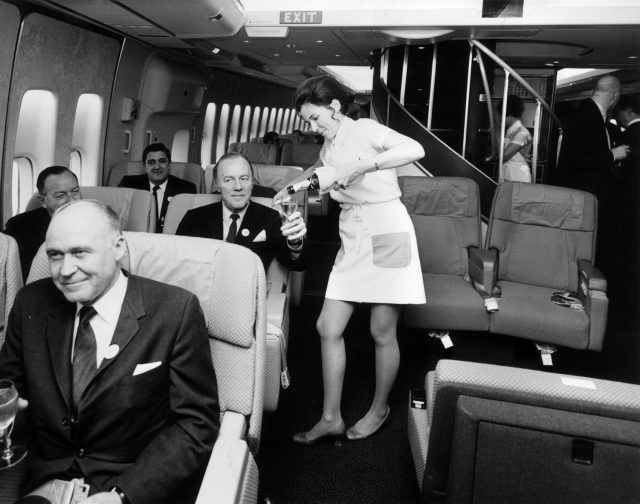 Oh, and did we mention that alcohol was free on airplanes during the 1950s, 1960s, and 1970s? In fact, American Airlines removed 60 seats from its Luxury Fleet of 747 jets in order to build a lounge large enough to fit both a piano and a bar that served complimentary cocktails. 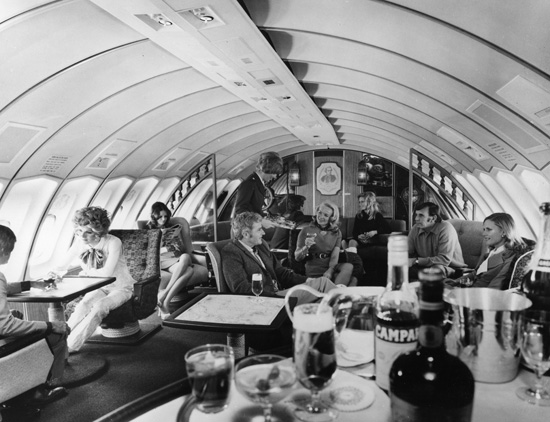 Much more room than today 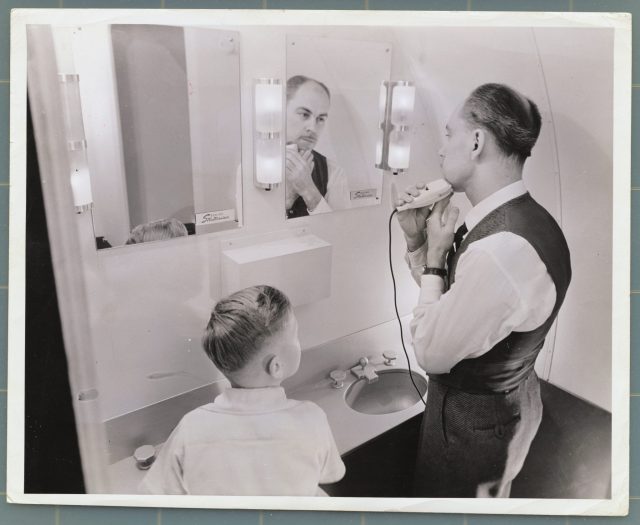 Man and a young boy in a restroom aboard a Boeing Stratocruiser. (Photo Credit: Bettmann/ Getty Images)

Planes in the 1950s and 1960s were much roomier than airplanes today. Between 1947 and 1950, Boeing produced 56 Stratocruisers, which had the capacity for 100 passengers. The Stratocruiser was spacious and luxurious, and offered travelers a much different experience when washing up than we have today.

Bob Fliegel, who rode on a Stratocruiser as a child, recalls the “ladies’ powder room having the elegance of the Waldorf, with fluorescent lighting, gold mirrors, and plenty of space for primping. Even the men’s room had ample room for shaving.” 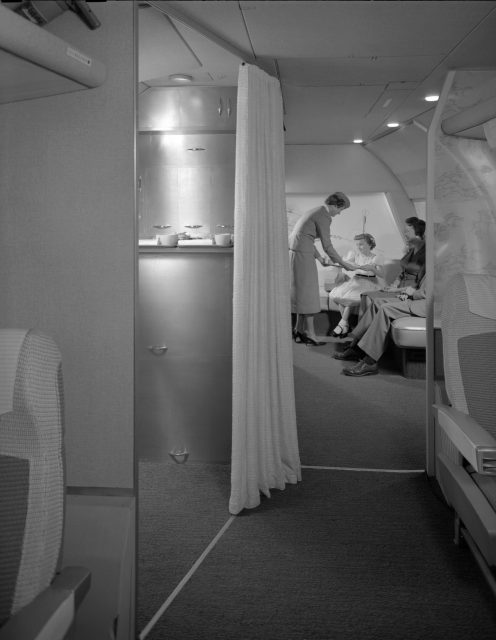 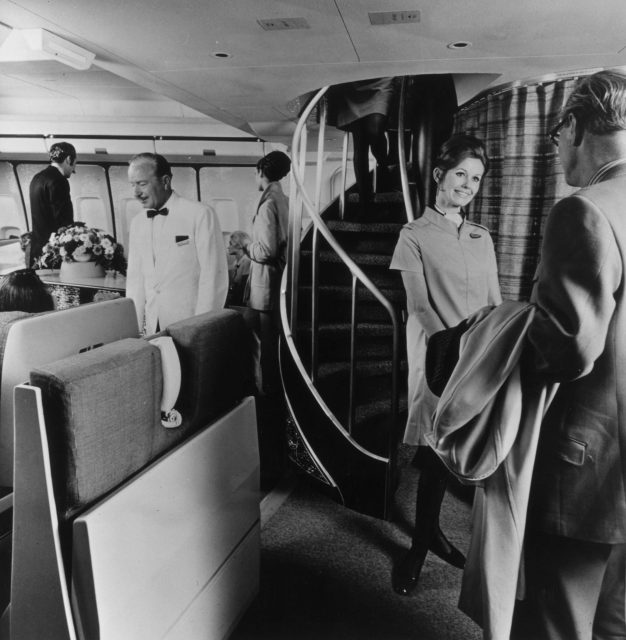 A hostess greeting a passenger in front of a spiral staircase leading to the upper deck lounge of a Boeing 747, circa 1970. (Photo Credit: Fox Photos/ Stringer/ Getty Images)

By the 1970s, Boeing had introduced its 747 passenger plane, which featured a luxurious upper deck for first-class passengers. The first 747’s upper deck was used exclusively as a lounge area with three windows on either side. Pictured above is the spiral staircase on a Boeing 747 which leads up to its upper deck. 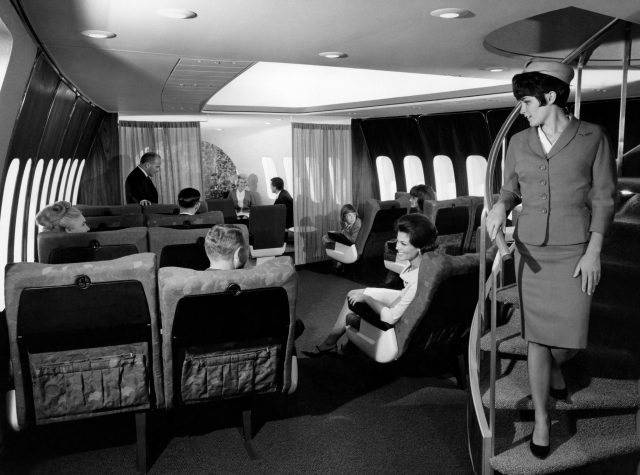 More from us: Concorde: How Supersonic Travel Was Grounded For Good

As you can see in this photo, first-class passengers had more than enough room to stretch out and socialize – quite a far cry from what we can expect today!

« Until Death Do Us Part? Golden Hollywood Stars With Multiple Marriages
Uncle Sam Malone: The US Government Made an Episode of ‘Cheers’ To Promote Savings Bonds »