Raquel Welch – Gorgeous Bombshell who Beat the Dinosaurs of Hollywood

Raquel Welch defined big screen glamour in the Sixties and Seventies. There are many screen sirens out there, but few happen to be Raquel Welch. Her striking looks, inspiring attitude and supposedly difficult reputation have put her in the history books. She’s still working today, but there’s a treasure trove of a career to look back on. 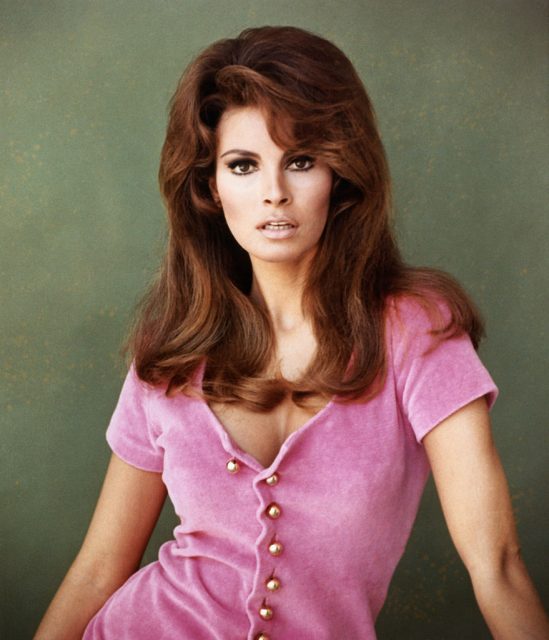 Born in 1940, her real name is Jo Raquel Tejada. She spent the first 2 years of her life in Chicago, Illinois before moving to California with parents Armando, a Bolivian aeronautical engineer, and Josephine. Her mother is described as having an Anglo English background. The family line is impressive – Welch’s grandfather was architect Emery Stanford Hall. Meanwhile on her Dad’s side, cousin Lidia Gueiler Tejada went on to become Bolivia’s first female President. 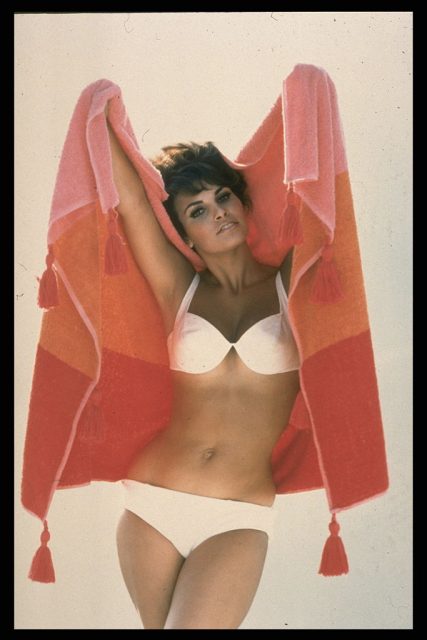 After a decade of ballet training, Welch was told her figure wasn’t suitable for the likes of Swan Lake. Not that it held her back. She was soon winning beauty contests in her teens, including Miss San Diego. 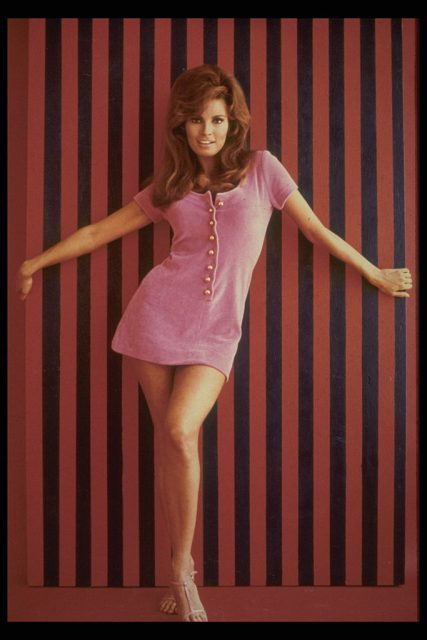 “I was happiest in fantasy,” she told Rolling Stone in 1974. “I wasn’t good at dealing with reality… I wanted a storybook life, to be Rapunzel and Cinderella and Sleeping Beauty, all the beautiful ladies that wonderful men came along on their big white horses and dragged away. Which is not remarkable, a lot of kids grow up that way. But I decided it was gonna happen.” 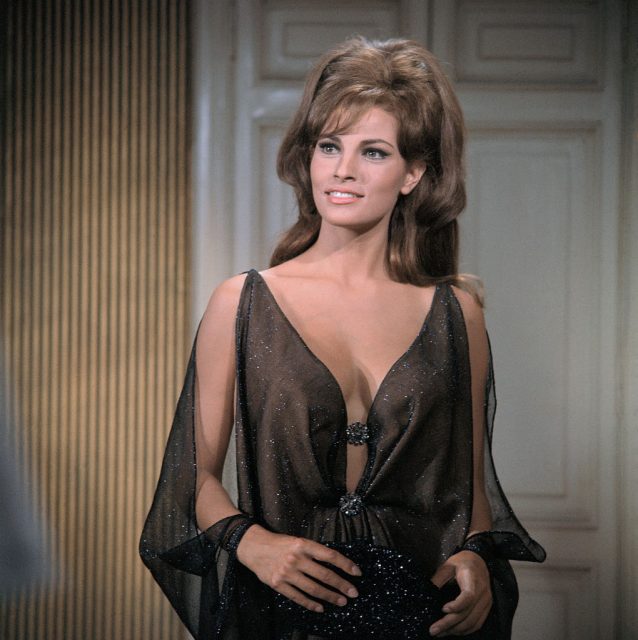 Raquel Welch in a scene from the movie Shout Loud, Louder, I Can’t Hear You. Getty Images

In the late Fifties she attended the State College on a theater arts scholarship. Her first screen job was factual rather than fictional, as a weather forecaster on KFMB! 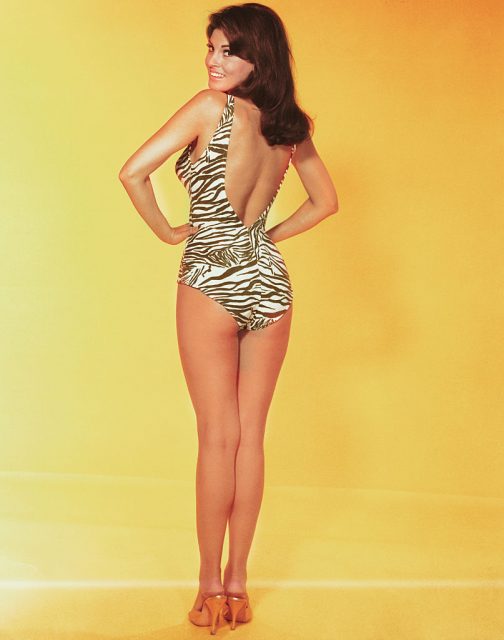 For several years she was married to high school sweetheart James Welch. After their split, Raquel went to Texas with her 2 young children and struggled to make ends meet. Relocating to LA in 1963 and pursuing movie roles, she partnered up with Patrick Curtis. He was her manager and eventually her husband, between 1967 and ‘72. That is when the glamorous symbol people know today was born. Curtis asked her to keep the name Welch because she would have been typecast as a Latina. 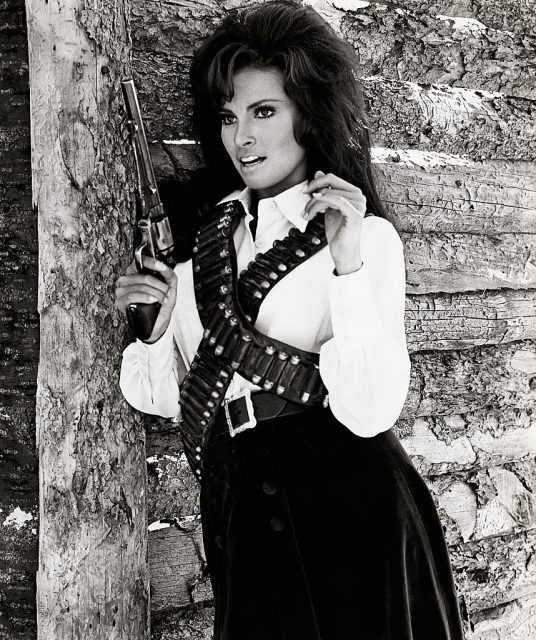 Raquel Welch in a movie still from “Bandolero!” released in 1968. Getty Images 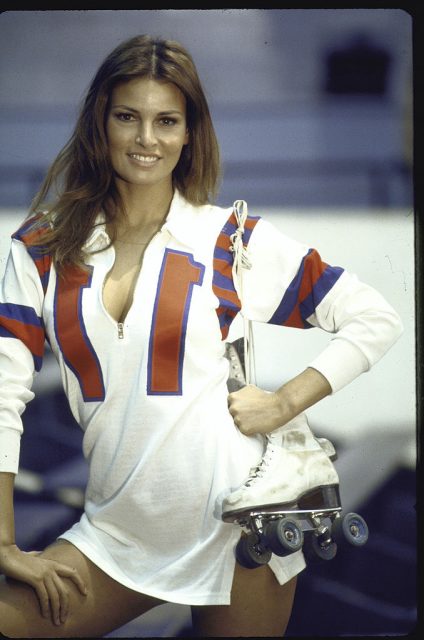 After a couple of very small parts, one of which was in the Elvis Presley film Roustabout (1964), she got her big break in Fantastic Voyage (1966). Co-starring Stephen Boyd, Edmond O’Brien, Arthur Kennedy and Donald Pleasance, this story of a shrunken submarine on a perilous mission through the human body was a smash. 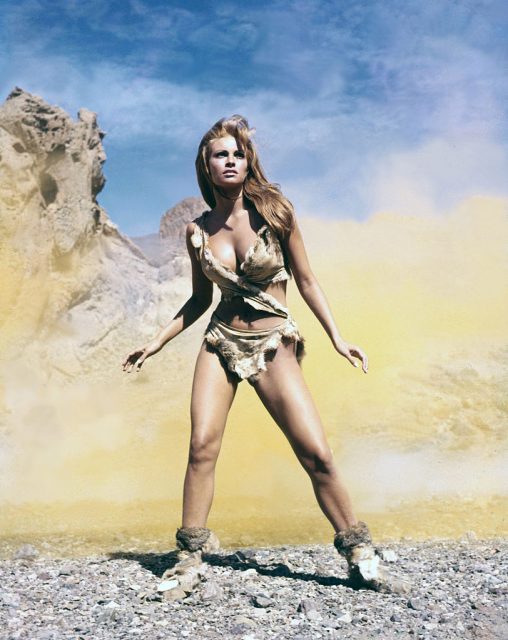 Raquel Welch on the set of “One Million Years B.C”. (Photo by Sunset Boulevard/Corbis via Getty Images)

However before that sci-fi spectacle burst onto the scene, audiences encountered Welch in cave girl picture One Million Years B.C. “I had made another movie which was a big step up for me (Fantastic Voyage),” she said during an interview with the Sunday Post in 2018. That “should have been released before One Million Years BC but the special effects delayed it, so I was the dinosaur lady first and the science lady second.” 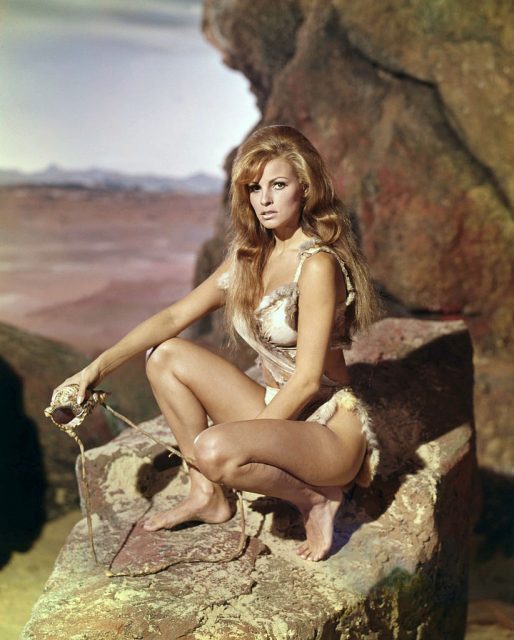 Much was made of her infamous fur bikini, which drew as much attention if not more than Ray Harryhausen’s stop motion dinosaurs. “Almost every day I get copies of the photo sent to me for an autograph. I must have looked at that photo One Million times!” she quipped. 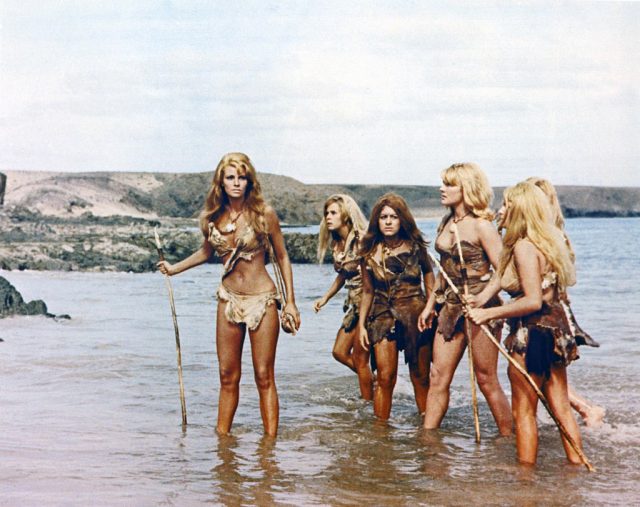 Raquel Welch and fellow cast on the set of “One Million Years B.C”. (Photo by Sunset Boulevard/Corbis via Getty Images)

Despite being the star of this Hammer classic, Welch’s dialogue was virtually non-existent. “I had three lines in that, the rest was silent. I rehearsed those three lines over and over, really worried I’d get them wrong. As it turned out I don’t think anyone would have really noticed if I hadn’t got them right!” 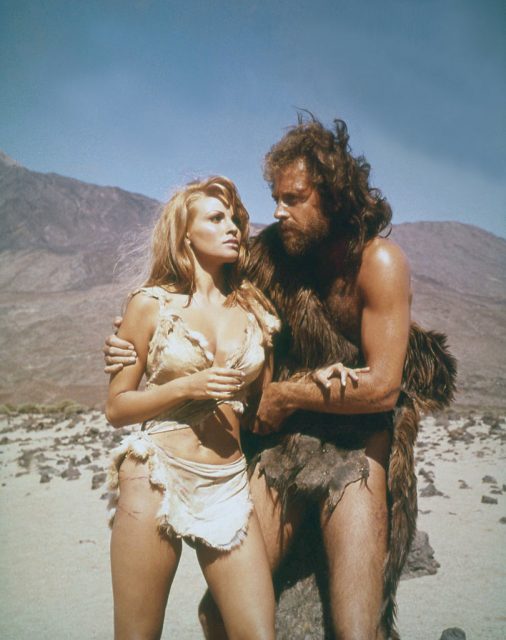 Raquel Welch and John Richardson on the set of “One Million Years B.C”. (Photo by Sunset Boulevard/Corbis via Getty Images)

She added, “No wonder people didn’t think I could act.” This contrast between Welch’s outward appearance and artistic ambition meant she was often pigeonholed. 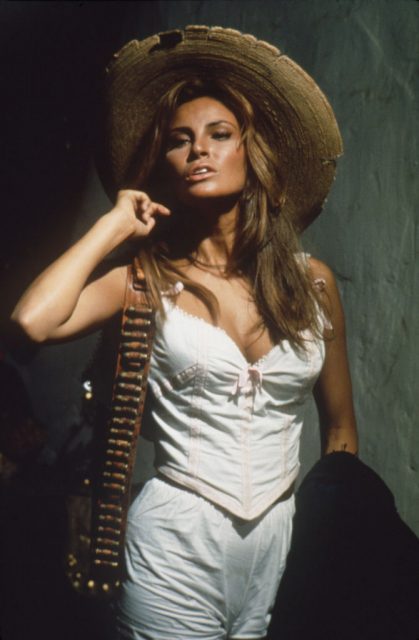 Raquel Welch on the set of 100 Rifles written and directed by Tom Gries. (Photo by Sunset Boulevard/Corbis via Getty Images)

Talking to The Scotsman in 2010, she mentioned confident views of her performances: “I’d taken the bull by the horns by liberating myself and creating a career. It took guts – it was scary and chancy – but they discounted me as empty-headed, some little piece of fluff without any brain that happened to come along.” 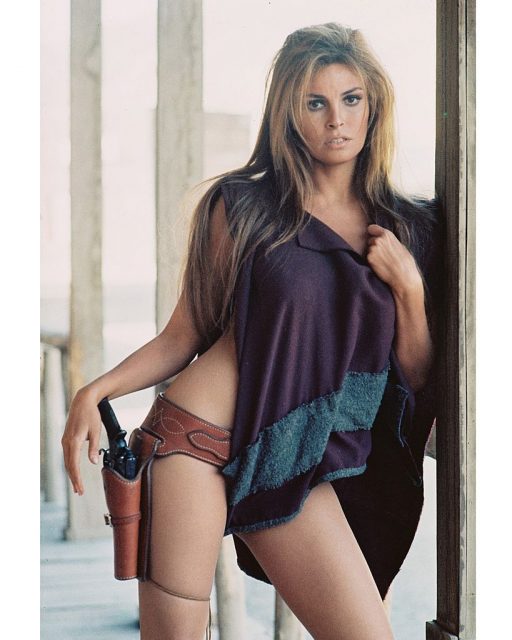 Welch earned her acting stripes over the years. She starred in spy comedy Fathom and played the embodiment of Lust in Bedazzled (both 1967). In the Seventies she appeared in diverse fare, such as the Western Hannie Caulder (1971) and black comedy Mother, Jugs and Speed (1976). Her performance as Constance Bonacieux in Richard Lester’s Three Musketeers movies are fondly-remembered. 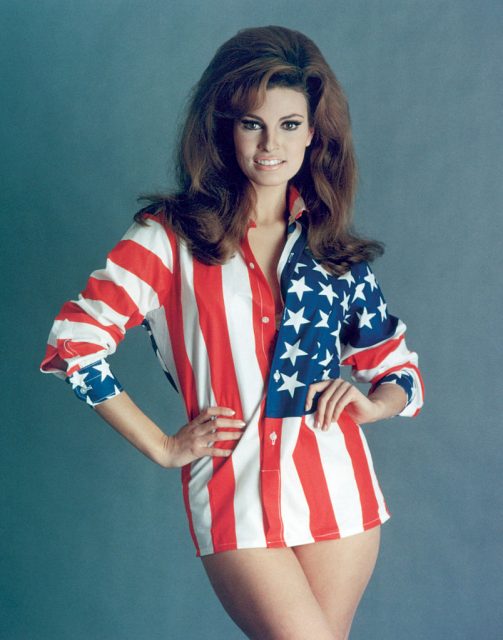 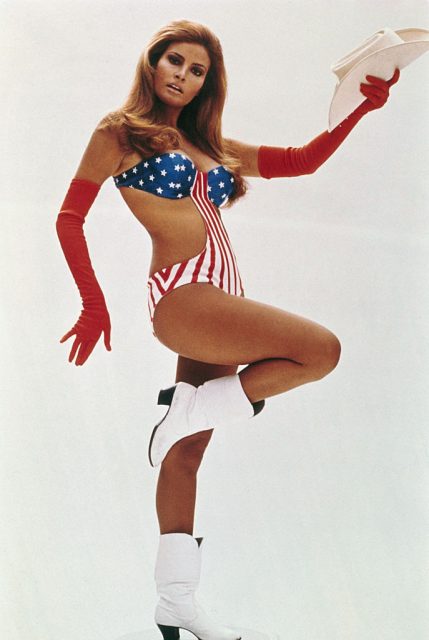 In the Eighties she famously sued MGM, after they fired her from John Steinbeck adaptation Cannery Row and replaced her with the much younger Debra Winger. The situation is believed to set back her career. She has acquired a rep for being challenging to work with. In some cases she rolled with that. A guest appearance on Seinfeld saw her playing herself as a stroppy diva who roughs up half the main cast. 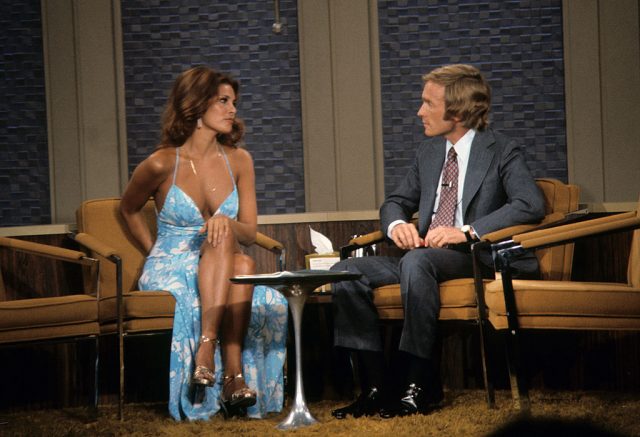 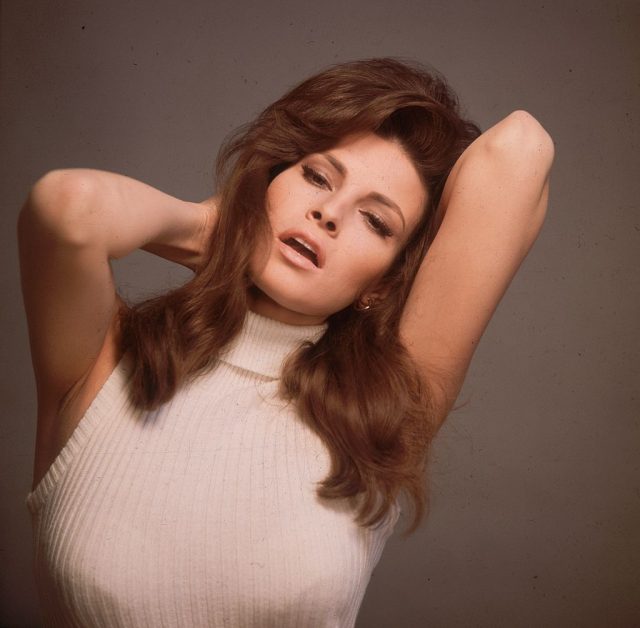 As far as Welch is concerned, she was doing what she had to. “I needed to be a little tough to break through,” she told The Scotsman. “But at one point I found myself being just a little too much. I told a few people off, and that wasn’t at all what I should have done.” 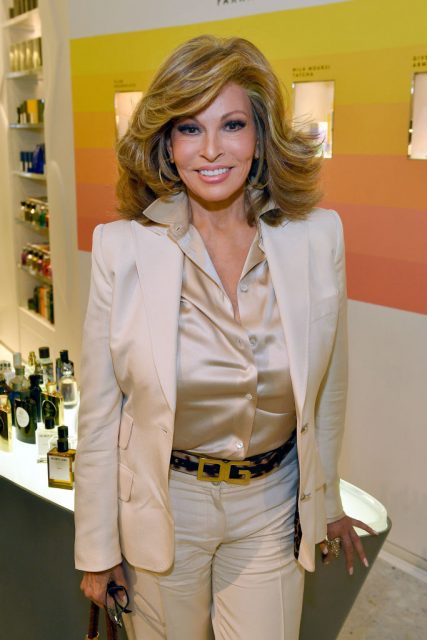 Welch’s honesty is also present in her behavior toward the public. In the Sunday Post she said, “I remember James Stewart telling me a long time ago never to avoid your fans or the things that your fans like about you. It was good advice.”

Four husbands and a string of awards later – including a Golden Globe for Three Musketeers – she’s living proof that hard work and a level head pays off. Show business runs in the family – her daughter is the model and actress Tahnee Welch.

“I am not fussy and don’t go to great lengths to try and preserve what I have,” she said to the Post. “I’m just a normal person… I get a little exercise and look after my skin. As long as I still look like Raquel Welch, I’m happy.”