Want To Be A Hells Angel? Read The Rules And Regs Of Anarchy First

So you want to be a Hells Angel, huh? We’re not gonna lie to you. It’s a tough life. When you’re not burnin’ rubber, you’re losin’ teeth down the freeway.

And we hope you like the smell of gasoline, because you’ll be sucking it up like an elephant in a peanut factory.

Oh, and before we forget, did you check out the rules? It takes a lot of dedication to be this wild and free. Here are 10 instructions you need to follow before revving up and hitting the highway… 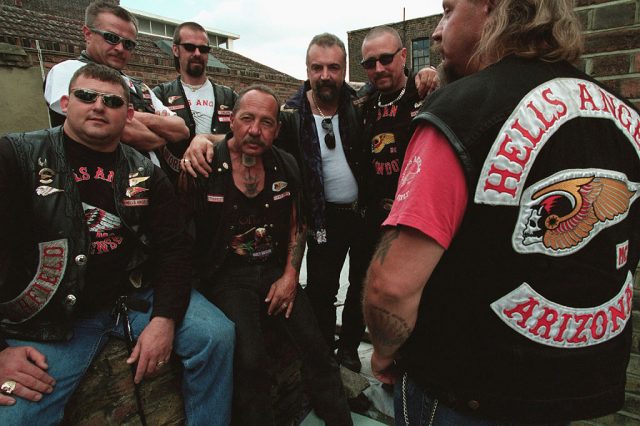 Sonny Barger, patriarch of the Hell’s Angels, with some of his biker buddies. (Photo Credit: Neville Elder/Corbis via Getty Images)

Once you’re a Hells Angel, it’s a lifetime commitment. A vote ultimately determines whether you become one of the gang.

Before that, however, there are a few hurdles you should jump before joining the pack. For starters, you’re a “hang around.” Post Fun refers to Julian Sher, the investigative journalist who explored the world of gas guzzlers and barroom brawlers.

From “hang around,” you go up a notch to “prospect.” This sounds like a leather-clad errand boy. Also, you’re identified as a prospect through having the word stitched onto your vest.

Speaking of which, Hells Angels are very attached to these items of clothing… 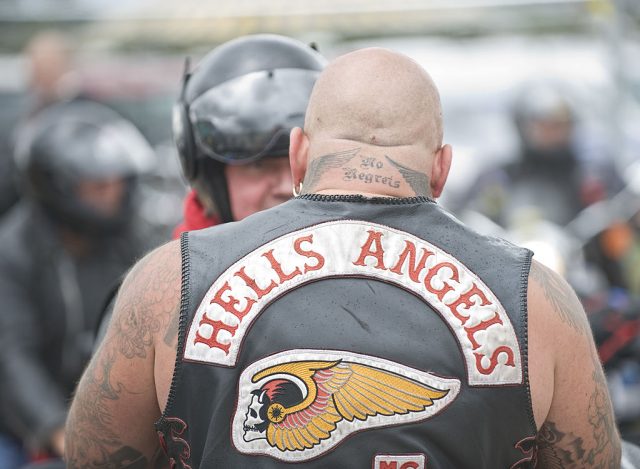 Like any club, there’s an insignia. Once you’ve earned the famous winged skill and logo on the back of your black shiny vest, it’s part of who you are. Not even a serious injury can get it removed, unless it’s absolutely necessary.

In a situation like, say, a road accident, they’ll “do whatever possible to prevent the vest from being cut or torn off.”

As with other clubs, attendance is encouraged. If you get sloppy, you’re handed your marching orders. Well, it’s a short march to your bike and then you ride out of their lives. 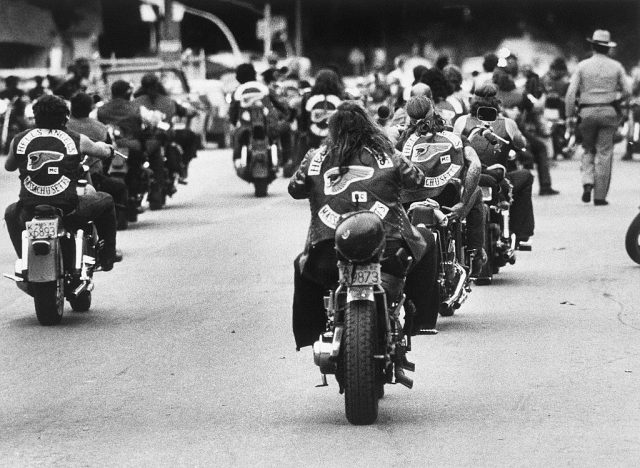 There’s a strict formation to a Hells Angels’ ride out. Good luck to anyone with big ideas who decides to pull out in front. Grunge notes that the “chapter president always rides in the front even if that places him at the most risk for possible collisions.” Talk about taking one for the team.

After that comes the Vice President (President and VP of the Hells Angels sure sound strange to outsiders, we’re thinking), Road Captain, and Sergeant at Arms.

Grunge mentions Ralph “Sonny” Barger, who established a chapter of Hells Angels in Oakland, California – the state where it all started for the organization. He writes that things are less regimented toward the back of the gas-burning posse. And why not? They’re Hells Angels, not synchronized swimmers.

Don’t show up to a club meeting on a Suzuki and expect to be welcomed with open arms. Harley Davidson is seen as the ride par excellence for Hells Angels, though other brand names are accepted. 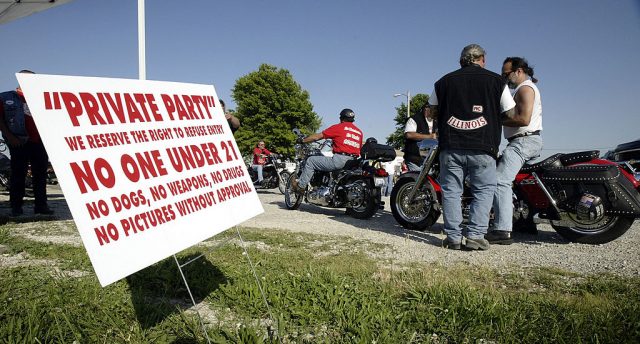 When you’re accepted into the Hells Angels, it’s kind of like Fight Club. You don’t talk about it, not to people outside the grease-happy circle, and certainly not to organizations like the media.

The Hells Angels, or Hells Angels Motorcycle Club, were founded in 1948 by war veteran Otto Friedli. He was responsible for banding several biker gangs together. His own was reportedly called the P***ed Off B******s club, before he left it. The Angels apparently got their name from the famous Flying Tigers squadron, who flew over China during the Second World War.

The notorious bikers have been up and running for over seven decades, and they don’t stay that way by welcoming blabbermouths. Hot Cars details their principles of “Honor, respect, and discipline.” The site goes on to add: “The bikers are brothers and the members become a big, tight family.”

4. They’re a little behind the times

Aside from all the riding around and camaraderie, Hells Angels are known for being mostly white and exclusively male. Not that women aren’t involved in various capacities. Plus, you can’t really join the club unless your significant other is cool with the idea. 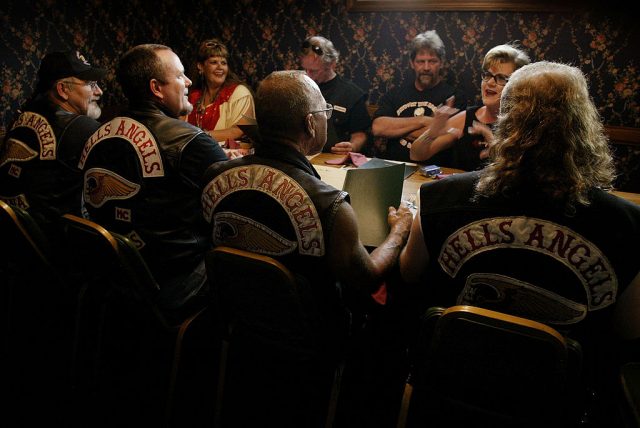 Pedants may want to give Hells Angels a wide birth. They’d want to call them Hell’s Angels but who cares about an apostrophe when you’ve got the wind blowing through your hair on the open road. And if you’re bald, well… that wind feels pretty nice anyway.

Either way, we wouldn’t recommend going up to some Hells Angels and asking them such grammar-related questions.

2. Stay mean and keep it clean

Ride fast, keep behind the boss and stay off the drugs. This last rule may surprise some readers, but the club advocates against illegal substances. 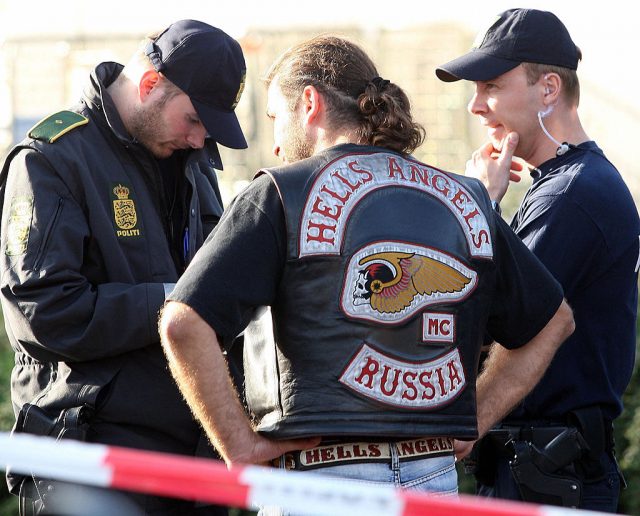 Light-hearted commentary aside, it’s easy to characterize Hells Angels as criminals who scare innocent bystanders with their loud engines and crude behavior.

That’s not a million miles away from the truth perhaps, though the lifestyle and sense of brotherhood must have some appeal also. Post Fun writes the Angels “have been known to engage in criminal activity at times.”

Avoiding interaction with law enforcement is part of the deal. Getting a job as a prison guard? No way. Wearing a badge and swinging a truncheon? Definitely no way!

More from us: The Hells Angels’ Plot to Assassinate Mick Jagger

Speaking to Sonny Barger in 2000, the BBC reports his view that Hells Angels are “no more a criminal organisation than the Branch Davidians.”