Archeologists working in the Ostrogozhsky District of the Voronezh region in Russia have uncovered amazing treasures while excavating a warrior’s grave.

The Don Expedition from the Institute of Archeology at the Russian Academy of Science has been excavating at the Devitsa V necropolis that consists of 19 different burial mounds.

Mound 7 of this necropolis, located in the middle of the cemetery, revealed a wooden tomb dating back from the Fourth Century BCE.

Within this tomb, archeologists discovered the skeleton of a male aged 40-49 years old. Buried with this man were small gold semi-sphere plates, an iron knife, a horse rib, a spearhead, and three javelins. Next to the burial site, the team uncovered horse harnesses, size bronze plates in the shape of wolves, the jaw from a bear cub, a molded cup, and several black-glazed vessels. 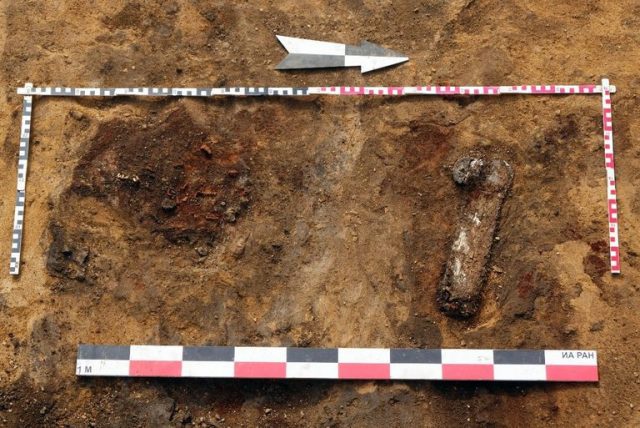 The most significant finding to come out of this warrior’s grave is a silver pate that depicts several deities, including the goddess Artimpasa in the central part of the plate. She wears a crown with horns on her head and is surrounded by winged eagle-headed griffons on each side.

Artimpasa was a goddess typically associated with fertility, power over sovereignty, and the priestly force, as well as being an androgynous goddess of warfare, fecundity, and vegetation.

The left side of the plate is adorned with depictions of syncretic creatures standing in a heraldic pose. Two round buckles are attached to the right side of the plate. Each buckle has an anthropomorphic character with a crown on its head, surrounded by two griffons. 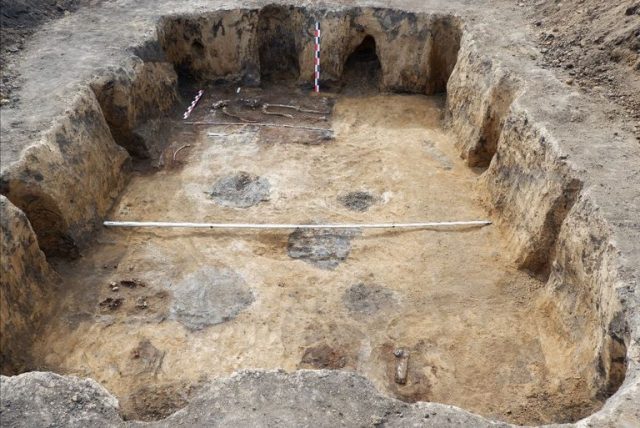 Commenting on the plate, Professor Valeriy Gulyaev from the Don Expedition said, “The finding has made an important contribution to our concepts of Scythian beliefs. Firstly, a particular number of gods are depicted at once on one item. Secondly, it has never happened before that an item with depicted gods has been found so far from the north-east of the main Scythian centers.”

More from us: Ancient Egyptian Necropolis Found Shows the Elite Helped Build their own Tombs

The Scythians were a group of ancient tribes of nomadic warriors who originally lived in what is now southern Siberia. From 900 BCE to 200 BCE, their culture thrived, and they extended their influence all over Central Asia – from China to the northern Black Sea.

« The Answer Behind Who Dug These Mysterious Tunnels In Washington D.C. Is Really Bugging Us
These Photos of Vintage Celebrities Have Us Asking ‘What?!’ »