These Photos of Vintage Celebrities Have Us Asking ‘What?!’

There’s nothing more spectacular than awkward photos. Not only are they a bundle of laughs, but they also make us feel sorry for the individuals forced to suffer through the process of taking them. One group famous for their awkward photoshoots were vintage Hollywood celebrities. Don’t believe us? Take a look at the selection below. 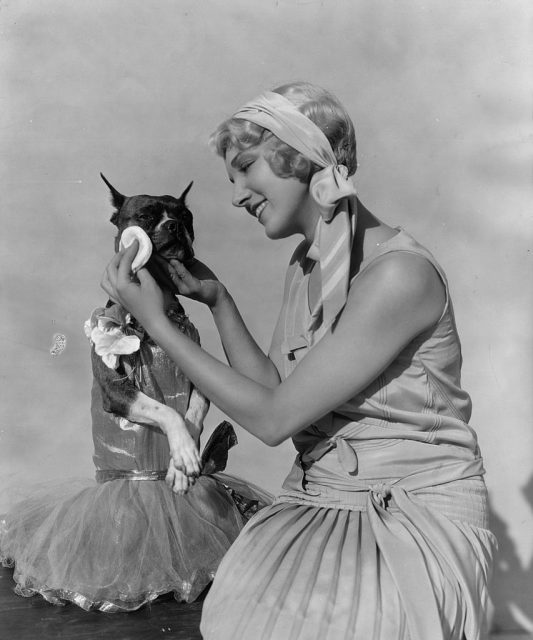 You often don’t think of applying makeup to dogs, as they’re already cute enough as they are. That, unfortunately, didn’t stop actress Leila Hyams from powdering the muzzle of Jiggs, star of the MGM Studios film, Hot Dogs. As if that wasn’t bad enough, the poor mutt was also forced to wear a poofy dress!

This was a very unsafe Christmas photoshoot 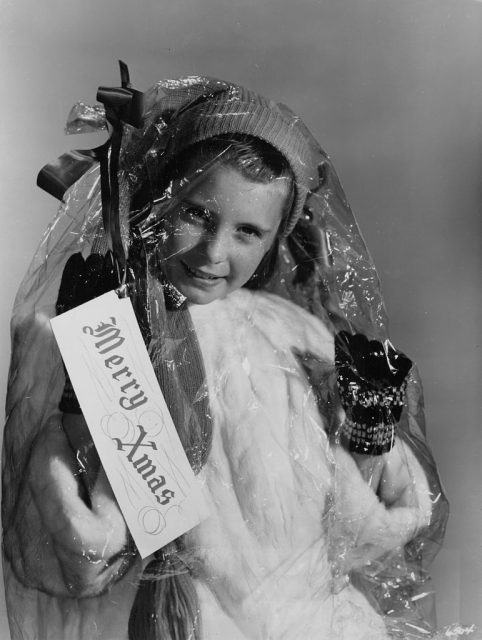 This photo of Margaret O’Brien was taken as part of a promotional shoot for MGM Studios in 1948. While it’s already weird enough that she’s wrapped like a Christmas present, this image is made worse by the fact she’s wrapped in plastic wrap. Talk about all kinds of unsafe! 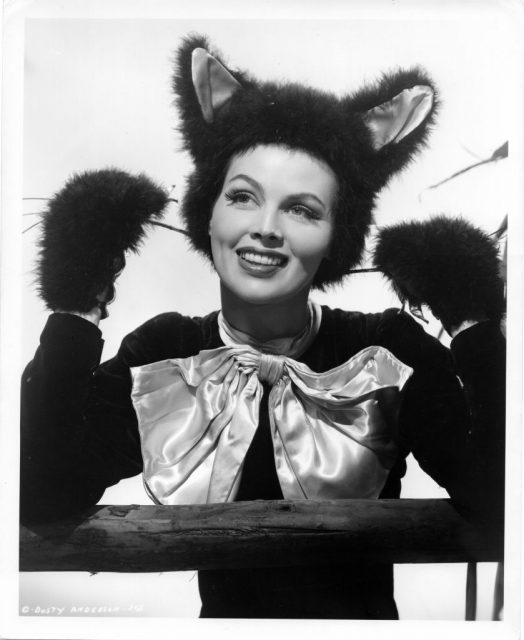 We’re used to seeing models and pinup girls dress in unusual outfits, but this has to be one of the weirdest. For some unknown reason, Dusty Anderson participated in this publicity shoot – the only question is whether it was her idea to dress up as a black cat or the photographers.

Running on the football pitch 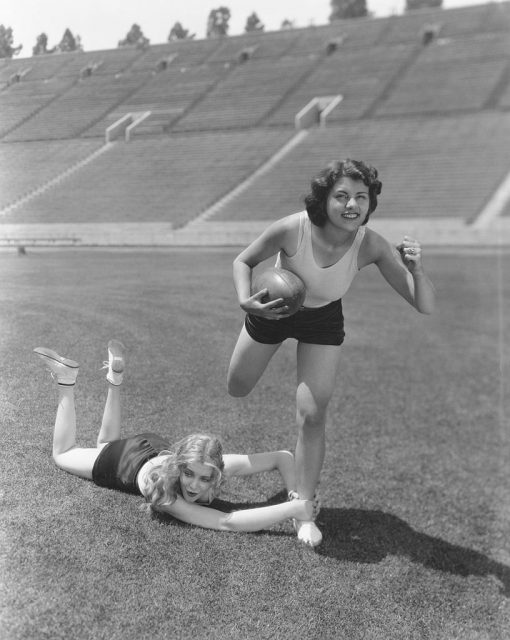 This photo screams all kinds of awkward, especially considering both Virginia Bruce and Lillian Roth look uncomfortable and out of place. Just why would their movie studio put them through such torture?! (And for football of all things!)

Why would you take a photo with a ventriloquist dummy? 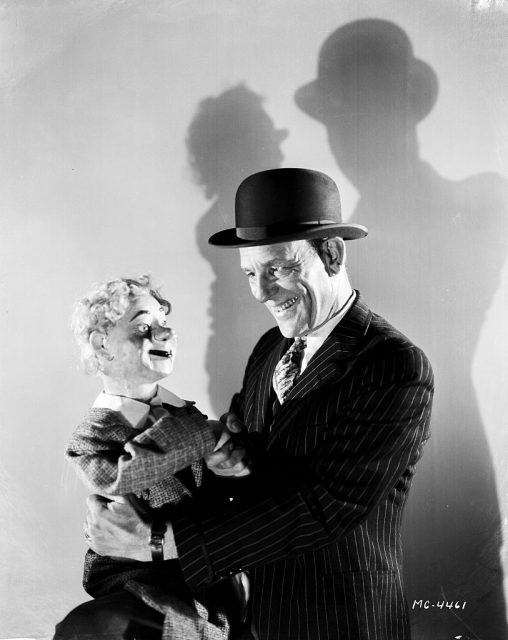 If there’s one thing we hate more than anything, it’s ventriloquist dummies. Not only are they incredibly creepy, but we just don’t understand how anyone could find them entertaining. Judging by the look on Lon Chaney’s face, he seems to agree.

That’s not a mechanical bull 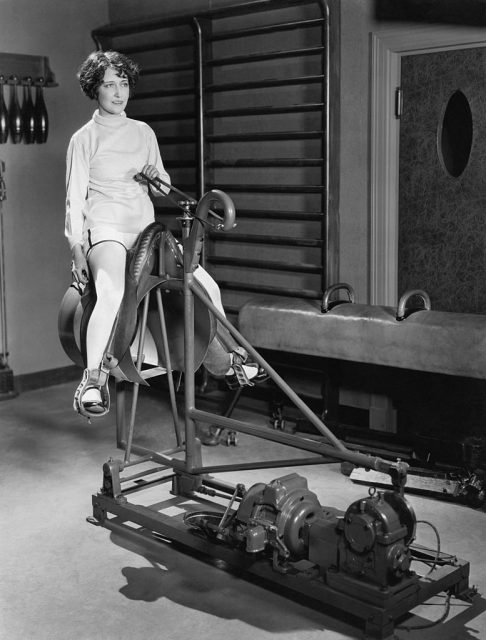 We’ve all heard of riding a mechanical bull, but what about a mechanical horse? For a reason that remains totally lost on us, actress Dorothy Sebastian decided to do a photoshoot while riding one – and a rather uncomfortable looking one, at that.

What’s with vintage Hollywood and cats? 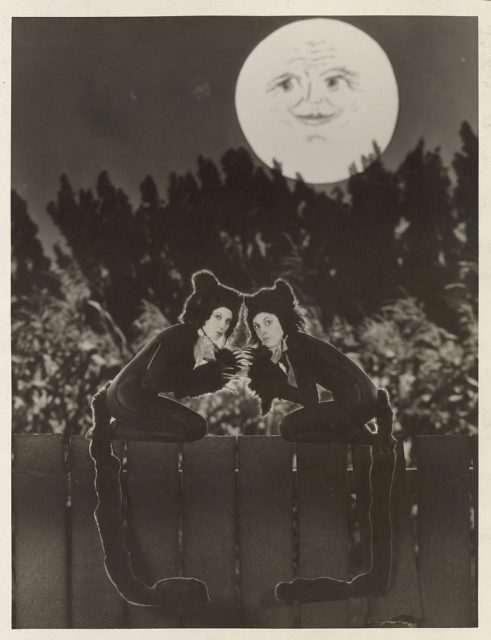 Just what exactly was up with vintage Hollywood’s obsession with having actresses dress up as black cats? Similar to Dusty Anderson, Raquel Torres and Mary Doran were forced to participate in what has to be one of the most awkward photoshoots we’ve ever seen… And the fact that the moon is uber creepy doesn’t help matters!

Why does Santa Claus have a shotgun? 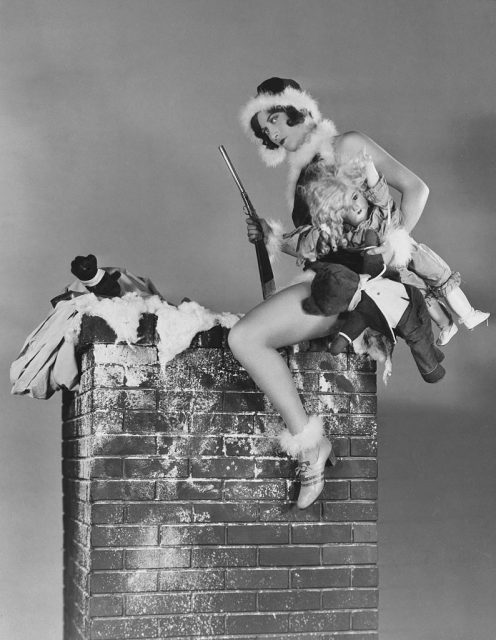 Joan Crawford is a vintage Hollywood legend (emphasis on legend), but that doesn’t mean she was immune to the curse of cringe-y publicity shoots, as shown by this image of her dressed as Santa Claus atop a chimney. While we fully support the fact she’s got lots of toys for girls and boys, we can’t quite figure out why she’s holding a shotgun… Is she expecting a Grinch at the bottom? 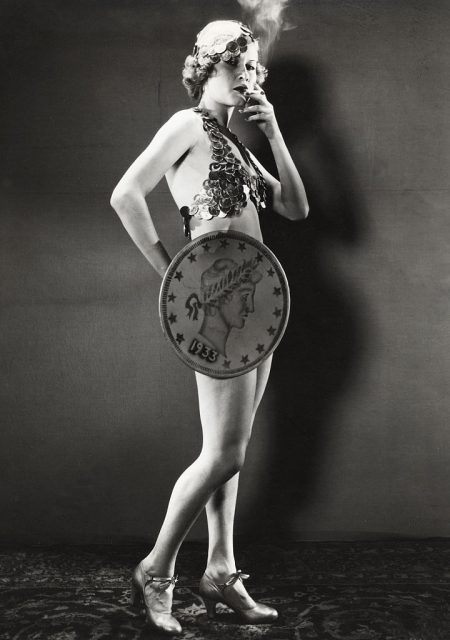 Now here’s an outfit you don’t see nowadays. We’d never think to dress ourselves (or others) in coins, given how heavy such an outfit would be, but that’s exactly what the photographer in charge of this shoot with Ginger Rogers decided to do. While awkward, we’d have to say this is definitely a look! 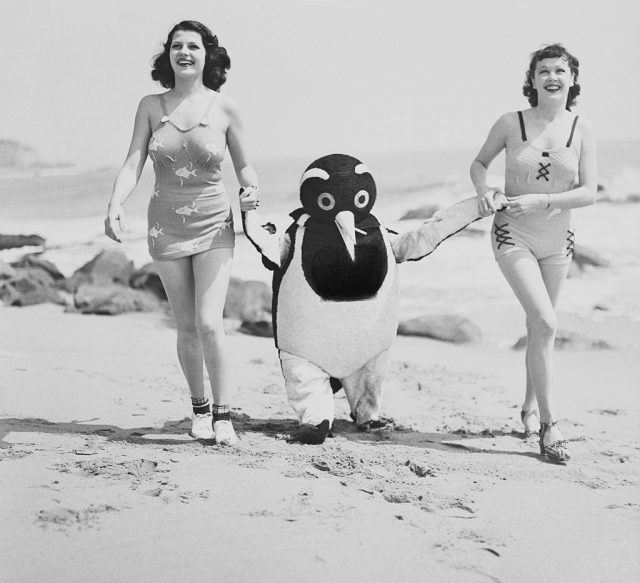 To promote the start of California‘s swimming season, actresses Rita Hayworth and Patricia Farr participated in a photoshoot with a smoking penguin. We have a lot of questions:

A rather creepy-looking Santa Claus 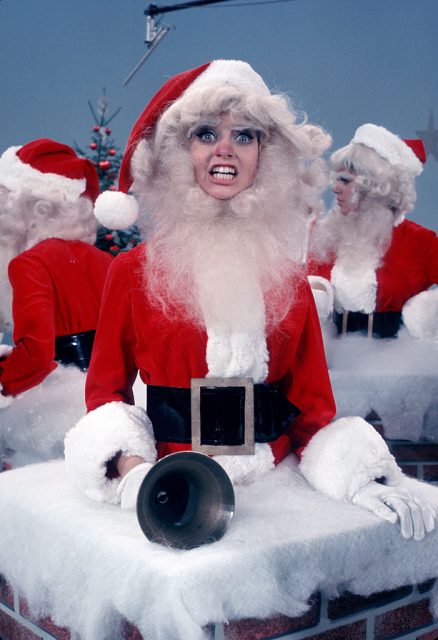 We couldn’t just include one awkward Santa Claus photo on our list, given how many we found! This one features the wonderful Goldie Hawn, who was known for having fun with publicity shoots during the early years of her career. When you have the chance, we highly suggest looking at the other images from this photoshoot – they’re guaranteed to give you a laugh. 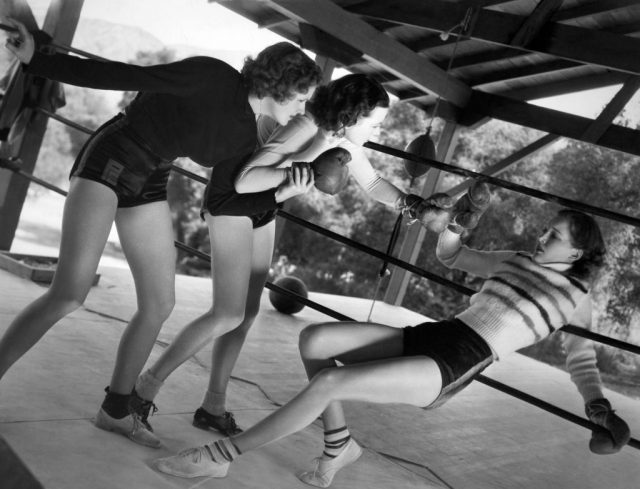 This has to be the strangest promotional shoot for a fashion show we’ve ever seen… And it was, until we found out what it was for. As it turns out, this was taken while models Virginia Carroll, Maxine Jennings and Jane Hamilton preparing to walk the runway during the Roberta Train Boxing fashion parade in New York City.

Just casually hanging from a tree 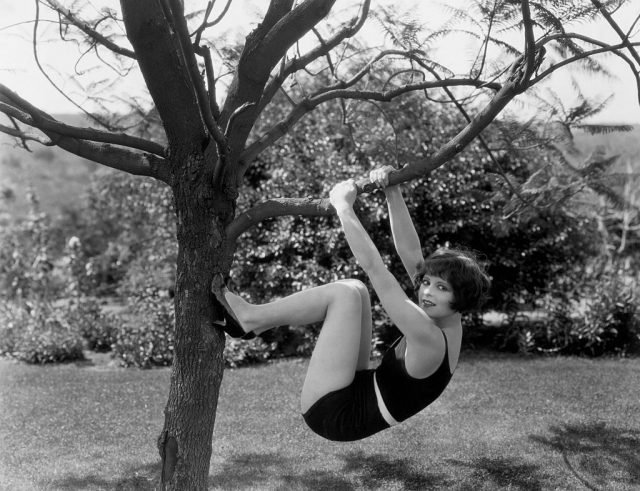 We love Clara Bow and all, but this has got to be one of the most awkward images to exist. Not only does she look ridiculous climbing a tree in high heels, but it doesn’t even look like she’s putting much effort into the endeavor. Come on, Clara, put some strength into it!

Where did they get that wishbone? 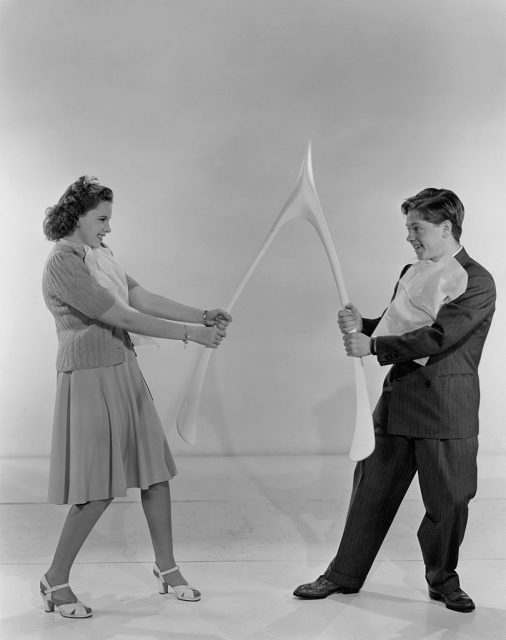 Judy Garland and Mickey Rooney are without a doubt two of the most famous faces of vintage Hollywood, so it’s no surprise they were forced into unusual photoshoots. Here we have them fighting over an unusually large wishbone. We can only assume this was a promotion of Thanksgiving, but, honestly, who knows. 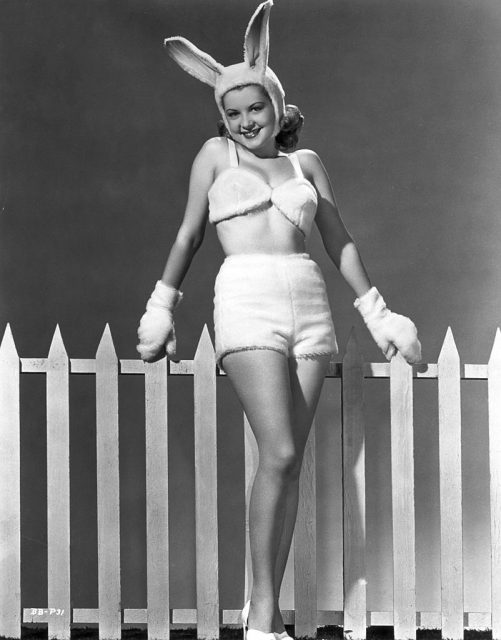 We now take a break from our regularly scheduled programming of black cat costumes to bring you this photo of actress Barbara Bates dressed up as a white rabbit, complete with ears and fur gloves. We guess it’s an… Umm… Look? 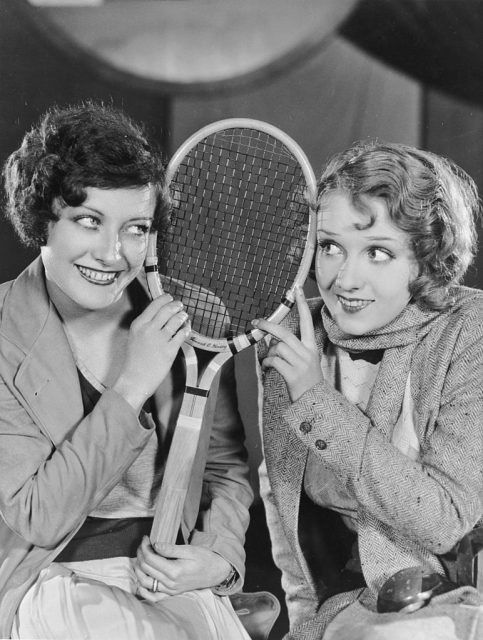 More from us: Awkward Vintage Photos of Classic Hollywood Stars Posing With Turkeys

We’d get using a tennis racket as a prop in photos featuring tennis stars or athletes, but that’s not the case with Joan Crawford and Anita Page. Just why is a racket being used in this photoshoot, and was it planned or something decided upon on a whim?