Wayne’s World the movie is one big onscreen party. But it’s also a story about friendship. Wayne and Garth, played by Mike Myers and Dana Carvey, made a great team.

Were things equally excellent behind the scenes? Sorry man, the answer is… no way!

Bring two brilliant character comedians together and sometimes the sparks fly, creative or otherwise. In fact, Myers and Carvey didn’t resume their collaboration for a couple of decades or so afterward.

Were you aware of that? We were not.

Mike Myers and Dana Carvey weren’t supposed to be a double act… Way!

The chemistry between these guys was undeniable. It all began on the small screen with Saturday Night Live. This is where Wayne Campbell and Garth Elgar first caught the world’s imagination. 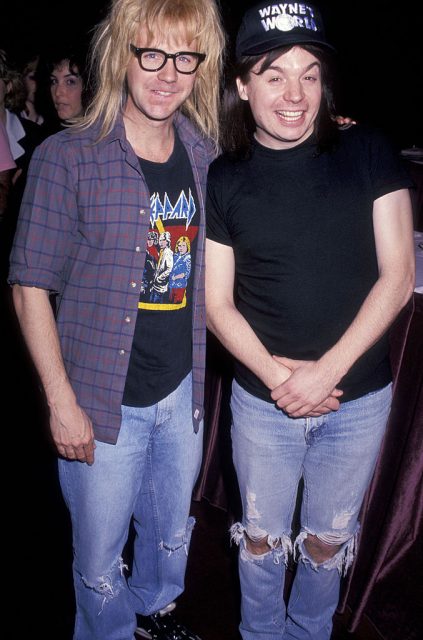 Myers’ made-up cable show called “Wayne’s World” was intended as just that… a series of Wayne-centric chunks to be blown across the audience. Garth was kind of a supporting character.

“Mike just invited me into the [Wayne’s World] sketch” Carvey told Howard Stern in 2017. “I’m really grateful that he did.”

When Wayne’s World made the leap to Hollywood, it seemed Myers and Carvey came as a set. For Myers, this wasn’t what he wanted. Garth was Wayne’s bestie for sure. Yet Carvey’s incredible performance had the potential to distract from his own hilarious title character. 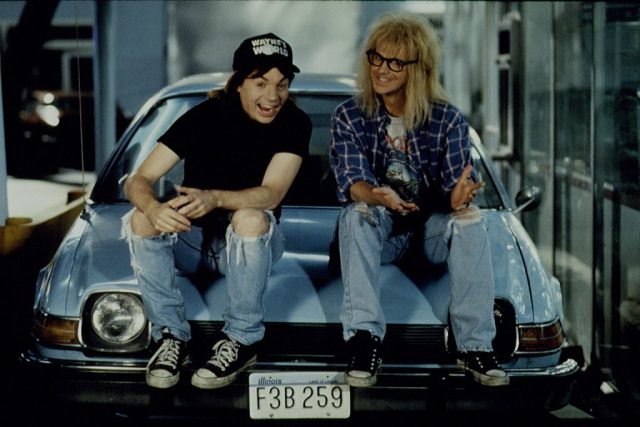 It got to the point where Carvey left temporarily when he realized his input was being ignored. “Throughout the scripting phase for Wayne’s World and Wayne’s World 2, Carvey joked that he’d be pushed out with each subsequent draft,” writes Ranker.

Not that it was all like this. One of the most well-known parts of the film is where Garth cracks up Wayne by talking about Bugs Bunny. This was improvised by Carvey. The laughter from Myers is a separate reaction to his fellow performer’s talents.

Dr. Evil was (allegedly) based on something Dana Carvey did… No way!

An alleged joke thief says “what”? We’re just messing around, though tension did exist between Carvey and Myers over one of the latter’s most memorable creations… Dr. Evil from the Austin Powers franchise. 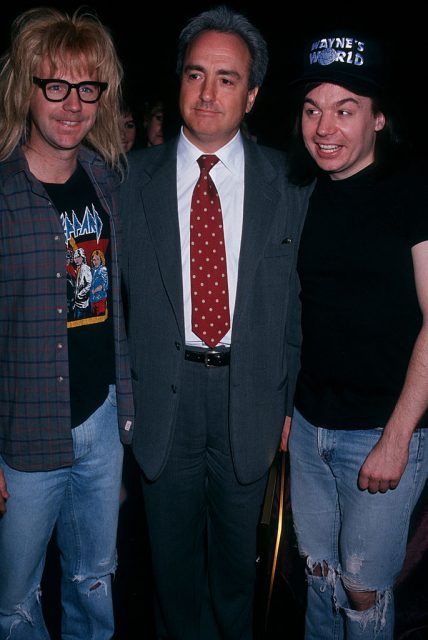 Carvey saw Myers’ performance and recognized something in it. Namely, his own impersonation of SNL‘s legendary producer Lorne Michaels. A sticking point was the way the Belgian criminal mastermind would bring a pinky to his lips. Carvey did this when playing Michaels for comic effect.

This perception that Myers pinky’ed up without asking put Carvey’s nose out of joint. And this is thought to be at the heart of their not speaking. 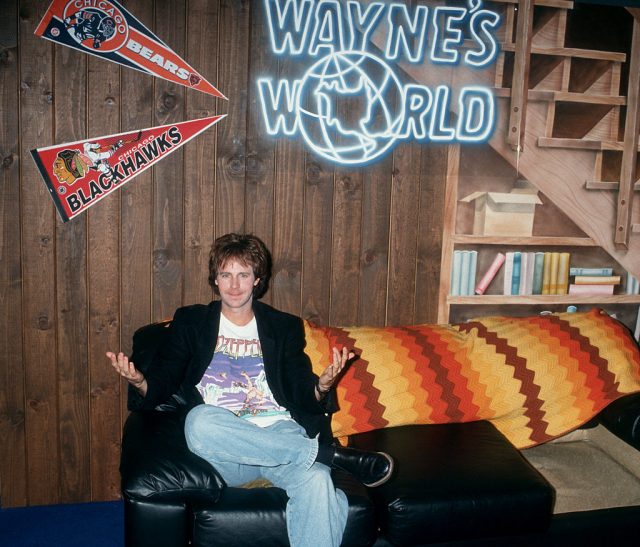 Myers’ take is that yes, there’s a connection between Dr. Evil and the SNL head honcho’s digit. Speaking to The Hollywood Reporter about the similarity, he stated “there are no two ways about it”. But the star is also keen to stress the influence of British actor and classic James Bond villain Donald Pleasence.

The dispute simmered for years before finally appearing to cool off. Carvey told Howard Stern he’d gone into therapy and that he had a “better perspective”.

He and Myers reportedly haven’t talked about the situation face to face. Though it wasn’t the end for Wayne and Garth.

Twenty-two years after Wayne’s World 2, the pair were back together. Myers and Carvey donned their caps and played air guitar to celebrate SNL‘s 40th anniversary in 2015. They later buddied up for the Oscars in 2019, though this time the comedians wore tuxedos. 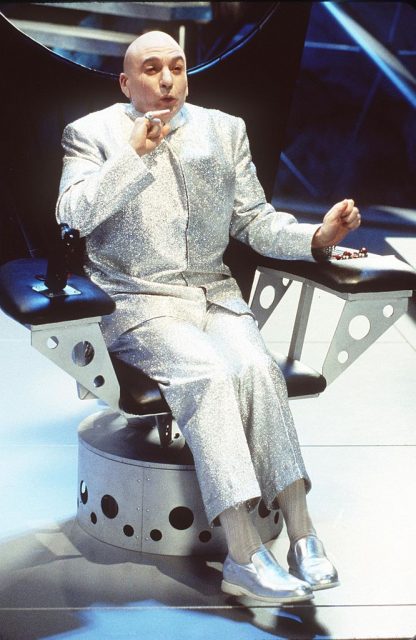 Wayne and Garth then went from a “Bohemian Rhapsody” to a football fest, as Myers and Carvey filmed a spot for the 2021 Superbowl.

Mike Myers and Dana Carvey had a shwinging time

Aside from trying to behave as Austin Powers, Myers provided the voice of Shrek.

These two franchises were joined by one-off performances in movies such as The Love Guru (2008), Quentin Tarantino’s Inglourious Basterds (2009), and oh yes, Bohemian Rhapsody (2018)! 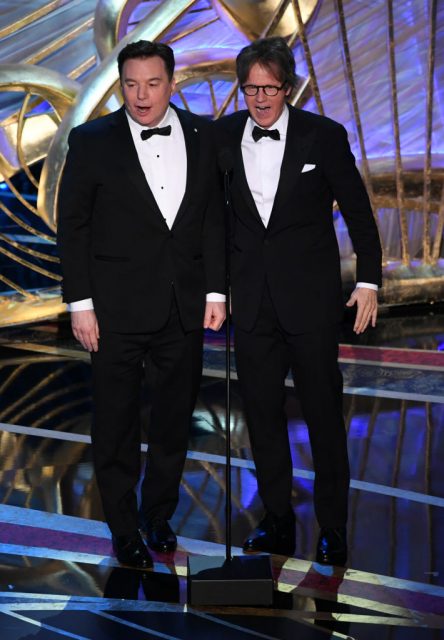 More from us: 10 Reasons why Bill Murray is Like no Other Actor in Hollywood 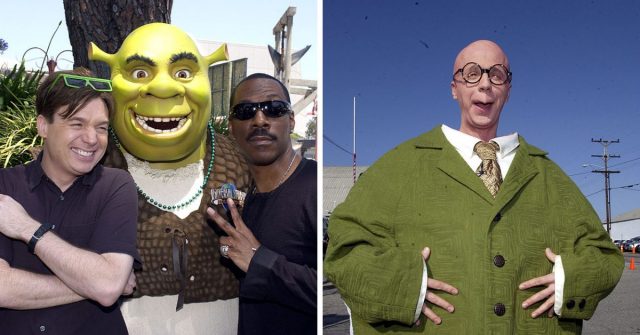 Meanwhile, Carvey continued his career as a renowned comedian and impressionist. He took time away from show business to focus on his family and voices characters for both Hotel Transylvania and The Secret Life of Pets movies.

Notable big-screen roles include acting opposite Sir Anthony Hopkins in Battle Creek Sanitarium comedy The Road to Welville (1994) and comedy vehicle The Master Of Disguise (2002). This notorious movie was critically-panned but made a healthy profit.