Spider-Man: The Unmade Movie That Was So Far From Home It Was on Another Planet

Spider-Man got his first big movie in 2002, starring Tobey Maguire. The web-slinger had taken a long journey to the big screen, following various attempts by some notable names.

One of the Spidey projects that never made it is more interesting than the rest. From a major misunderstanding to an eye-popping cast, here’s what happened when Cannon Films tried to catch a spider.

Before the company got the go-ahead, there was another producer in town with Spider sense. Low-budget maestro Roger Corman could have made a Spider-Man flick in the early 1980s. He even put Marvel’s head honcho Stan Lee on script duty. 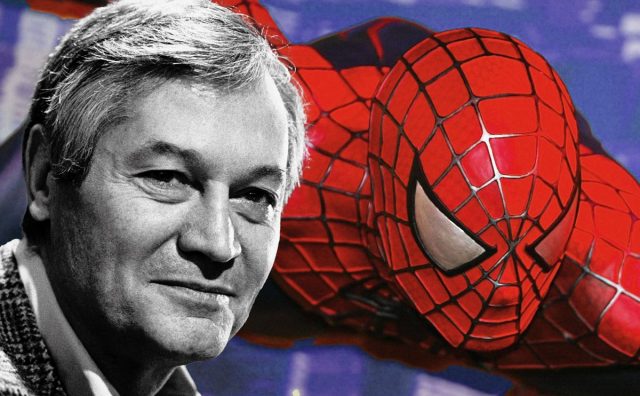 As Film School Rejects writes, the pair had a clash of ideas. Whereas Lee pictured a blockbuster, Corman needed “a comic book movie that could be budgeted with the handful of crumpled bills he had in his pocket.” The arrangement soon went south.

Stan Lee’s vision of a big-budget Spidey adventure arguably wasn’t any safer with Cannon Films. They too made their fair share of B movies, starring the likes of Chuck Norris (Missing In Action) and Michael Dudikoff (American Ninja).

What seemed to swing it was the lack of interest in comic book properties from major players. Empire notes that producers/cousins Menahem Golan and Yoram Globus “felt that the superhero genre still hadn’t been fully exploited”. This ahead-of-the-curve thinking meant they wound up with a deal.

The original screenplay had legs… too many legs

Unfortunately, while Golan and Globus were enthusiastic, they didn’t have strong attention to detail. At least as far as the initial pitch goes. Screen Rant describes the plot as “focused on a mad scientist named Doctor Zork, who deliberately exposed company ID photographer Peter Parker to radiation.”

If that doesn’t sound a lot like Spider-Man then how about the next part? Peter changes into a hybrid with eight legs! Did the creative team actually read a comic before putting the story together? This bizarre monster movie angle was promptly trapped and released out the window.

Who was going to play Spidey?

Stuntman Scott Leva was reportedly in the frame to play Peter Parker/Spider-Man. While he never got his wish, there are some test snaps of him in costume. Not to mention a Marvel Comics cover featuring a photo of him in an action pose. 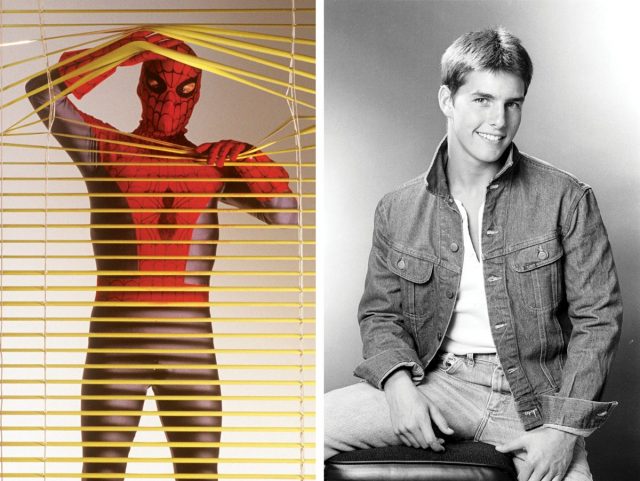 Tom Cruise was a more stellar proposition. Cannon’s Spider-Man was gearing up in 1985, when Cruise appeared in Ridley Scott’s Legend. He’d made Risky Business a couple of years earlier and was on the cusp of becoming “Maverick” in Top Gun. Would he have said yes? We’ll never know.

Stan Lee could have been J. Jonah Jameson

It’s hard to imagine anyone other than J. K. Simmons as Daily Bugle editor J. Jonah Jameson. He took the role in Sam Raimi’s Spider-Man trilogy and has reprised it for the Tom Holland MCU movies. 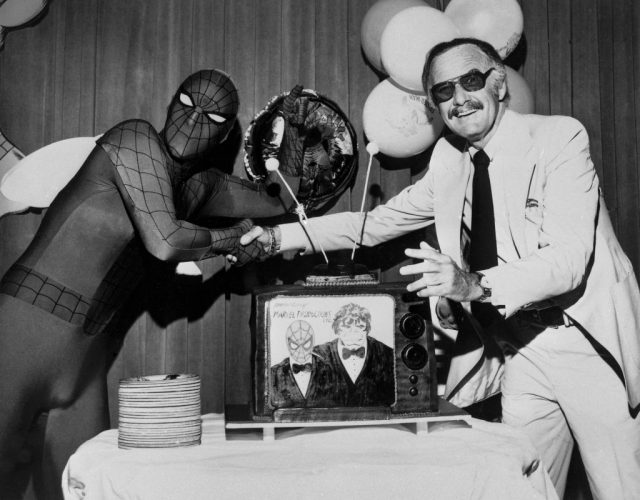 It was a touching moment for both father and son when Marvel comics Group’s publisher Stan Lee and his offspring the Amazing Spiderman got together to celebrate the opening of Marvel Productions Ltd., a new television Group. (Photo Credit: Bettmann Archive/Getty Images)

Before Simmons donned the hairpiece, another star wanted the scoop… Stan Lee. He’d done his share of narration and cameo work, but did Lee have the acting chops for Jameson? For starters, he came across as too nice! Either way, the casting didn’t happen.

Speaking of eye-opening cast members, producers wanted a Golden Age icon for the role of Aunt May… Lauren Bacall! On a less impressive note, Hulk Hogan was supposed to make a brief appearance, reflecting the eighties vibe.

Who were the villains?

Doctor Octopus was the original villain in Cannon’s Spider-Man. With Bob Hoskins reportedly eyed for the part, it would have shown him in the orange and green colors familiar to comic book fans. CBR writes the garish costume was “justified by saying it’s a tracksuit he steals in desperation and never changes out of.” 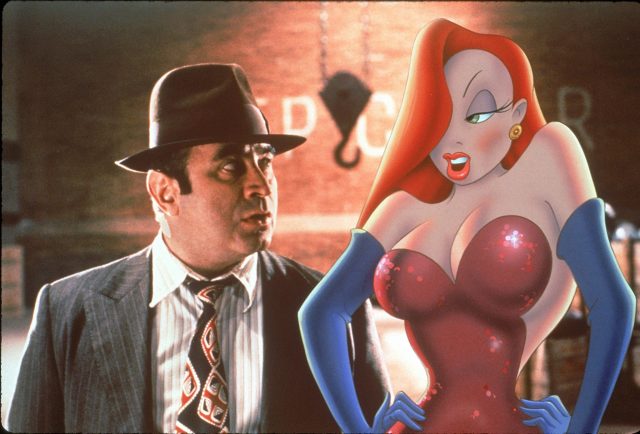 As people came and went, the big bad shifted to a Morbius-style vampire and then Dr. Curt Connors/The Lizard.

The 1985 Spider-Man may sound silly but it appears the tone would have been quite hard-hitting. CBR mentions the urban setting is “littered with pimps, hustlers, and prostitutes.”

Meanwhile, everyone’s friendly neighborhood Spider-Man has “a veneer of sarcasm,” suggesting he’s less of a wisecracker than a party pooper. This downbeat approach predates The Dark Knight trilogy and other, grungier efforts by some years.

A teaser trailer was made

Cannon’s take on Spidey went unmade. However, some evidence of what might have been exists, thanks to a teaser trailer. This is available to watch on YouTube:

Screen Rant refers to a 50-page advert produced by the company, giving people a taste of what they were going to witness. Publicity materials show Spider-Man jumping through space with the Earth below, which is somewhat confusing!

The famous “Muscles from Brussels” eventually set foot on the Spider-Man set. Had he been cast as the world-class web-slinger? No such luck.

In fact, Cannon was using abandoned Spidey sets for a sci-fi action film, Cyborg (1989). Also visible are backdrops made for (the unproduced) Masters Of The Universe 2. Directing Cyborg was Albert Pyun, a potential Spider-Man director who went on to make Captain America in 1990.

Why didn’t Spider-Man scale the heights? Cannon was in financial difficulty after some pricey pictures failed to set the box office alight. One of these was another superhero movie, the notoriously misguided Superman IV: The Quest for Peace (1987). The company was sold and Peter’s web-shooters went into storage. 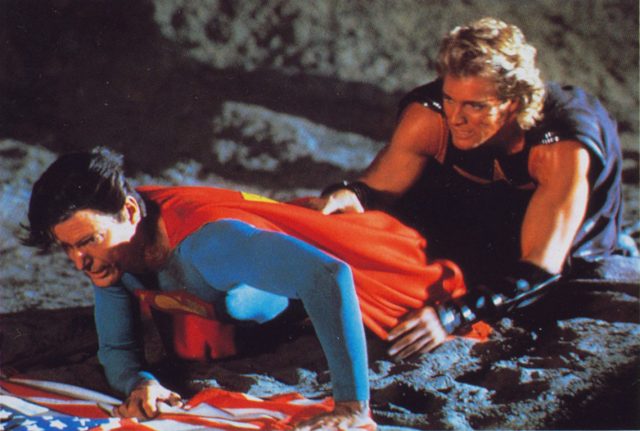 It makes for a juicy story, though would Spider-Man 1985 have been all that bad? Den of Geek notes that, while Cannon releases were “frequently reviled by critics,” it was also responsible for “Oscar- and Golden Globe-nominated movies, too ”“ an unusually mixed output for any American production company.”

Other Spider-Man movies that were slung 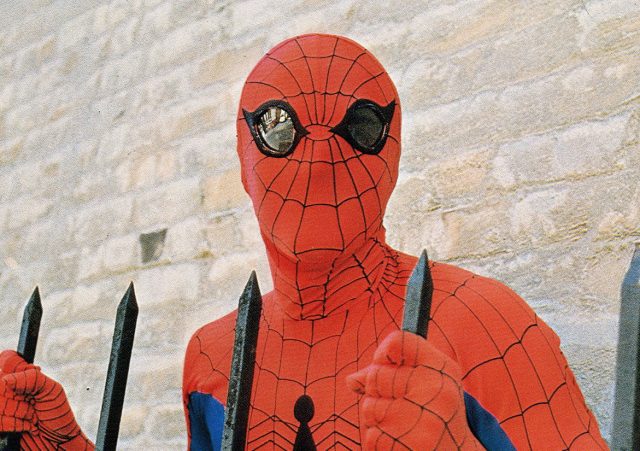 Screen Rant writes about a last-ditch attempt by Cannon’s Menahem Golan to make a Spider-Man film. With the firm absorbed by Pathe Communications, he managed to take the rights for himself.

More from us: Bill Murray As Batman? Eddie Murphy As Robin? David Bowie As The Joker? Hold The (Bat) Phone!

It was then that powerhouse director James Cameron became involved. As expected from the man responsible for The Terminator (1984) and Aliens (1986), Cameron had some bold – and, in some cases, saucy – ideas.

Following arguments between Golan and his new partners, the reinvigorated Spidey hit the skids.