How a Wealthy Socialite Became the First American-Born Saint

When someone talks about “saints,” most people think of someone like Saint Peter, Saint Christopher, or Saint Nicholas.

But there have been some surprising saints over the years, one of them being Elizabeth Ann Seton, the first saint to come from America. A socialite who wasn’t raised as a Roman Catholic, Elizabeth was shunned by her elite friends when she converted. But she worked tirelessly to help the poor, and in September 1974, she was canonized.

Born in New York City in 1774, Elizabeth Ann Bayley was known to friends and family as Betty Bayley. Her father was a respected surgeon, and both her parents were from families that were some of the earliest European settlers in that area. 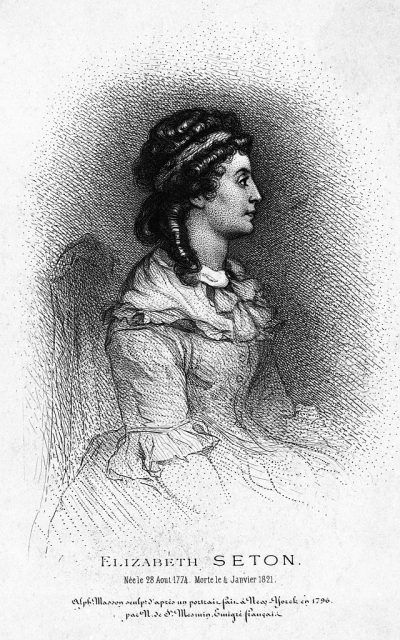 After her mother died in 1777, her father remarried to provide a mother for his daughters. Elizabeth’s stepmother, Charlotte, took Elizabeth with her when she distributed food to the poor. Even though at this point Elizabeth was an Episcopalian, she was already developing a passion for helping those less fortunate than her. She was very grieved when Charlotte abandoned her after separating from Elizabeth’s father.

The wedding of the year that became a short marriage

When Elizabeth got married in 1794, it was the biggest social event of the season. Elizabeth was only 19 and her husband, William, was a wealthy 25-year-old businessman. With her new sister-in-law, Rebecca Seton, Elizabeth would continue to visit the poor in her new neighborhood.

In 1797, she was encouraged by her father to help found the Society for the Relief of Poor Widows with Small Children. Elizabeth also served as its treasurer for seven years.

When William’s father died, the family fortunes were already declining thanks to the unstable economics preceding the War of 1812. Elizabeth and William took in his six younger siblings to live with their own five children. 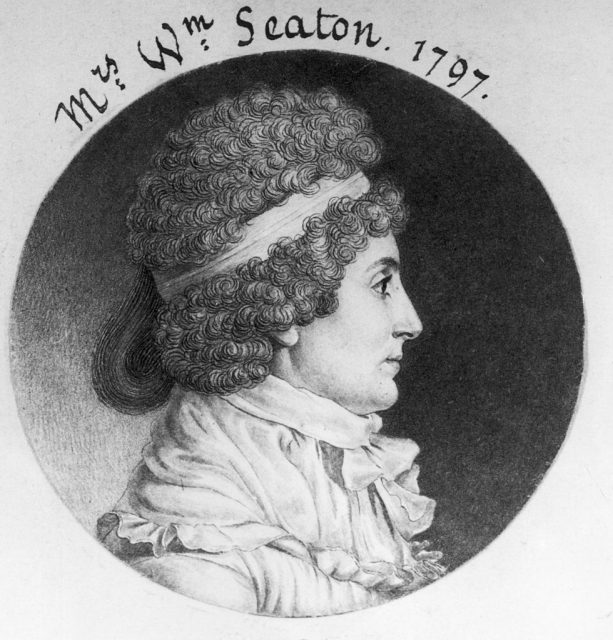 Attacks by the French on American trading ships between 1798 and 1800 saw their fortunes decline further. The stress made William’s lifelong tuberculosis worse. The doctor prescribed fresh Italian air, so William traveled there with his wife and their eldest daughter to Italy.

Unfortunately, William died in Italy and was buried there. His previous business partners, Filippo and Antonio Filcchi, took in Elizabeth and her daughter while they waited for passage back to England. Through her time with them, Elizabeth was introduced to Catholicism.

A new faith loses her friends

When she returned to New York in June 1804, she became part of St. Peter’s Church, the only Catholic church in the city. She was confirmed in 1806.

Finding herself suddenly a widow in New York, Elizabeth set up either an academy for young ladies or a boarding house for boys (reports vary on which it was). What all reports agree on, however, is that when news of her conversion spread, many parents withdrew their children from her care. Anti-Catholic feeling was still strong in those days, with the anti-Catholic laws having been lifted only a few years before. Elizabeth was to suffer the stigma of her peers for several years.

A fresh start in Emmitsburg

In 1809, Elizabeth moved to Emmitsburg, Maryland, where, at the invitation of the president of St. Mary’s College in Baltimore, she set up the Saint Joseph’s Academy and Free School. It was the first Catholic parochial school established in America. 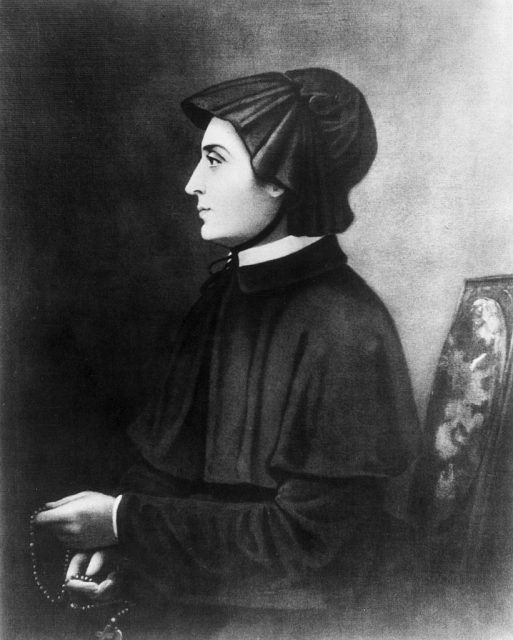 Many other women came to help her, and a religious community built up around the school. In 1809, the women took vows before Archbishop John Carroll and they became the first American-based Catholic sisterhood. They called themselves the Sisters of St. Joseph (later renamed to the Sisters of Charity of St. Joseph), and Elizabeth became “Mother Seton.”

Elizabeth worked tirelessly and selflessly until her death on January 4, 1821, from tuberculosis. She had only been a Catholic for 16 years, but the legacy of all her hard work was substantial. By then, the order had 20 communities, including two orphanages and another school.

Sainthood requires an individual either to be martyred or to be responsible for two miracles. Elizabeth’s miracles came from beyond the grave after people prayed to her.

In the 1930s, Sister Gertrude Korzendofer recovered from pancreatic cancer after praying to Elizabeth. Then four-year-old Ann Theresa O’Neill was cured of leukemia in 1952 after a nun prayed to Elizabeth on her behalf. 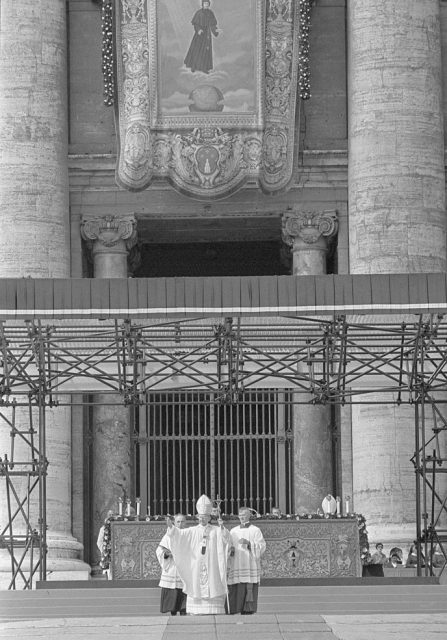 The final miracle involved a construction worker called Carl E. Kalin, who was admitted to hospital in 1963 with meningitis of the brain. In a coma, he was given only hours to live. The New York chapter of the Sisters of Charity visited him, prayed for him, and put a relic (one of Elizabeth’s bones) on him. He woke up a few hours later, with no medical explanation as to how he had recovered.

Elizabeth was beatified on March 17, 1963. As part of the ceremony, Pope John XXIII said this about her: “In a house that was very small, but with ample space for charity, she sowed a seed in America which by Divine Grace grew into a large tree.”

When she was canonized on September 14, 1975, by Pope Paul VI, he added his own words in her honor: “Elizabeth Ann Seton was wholly American! Rejoice for your glorious daughter. Be proud of her.” 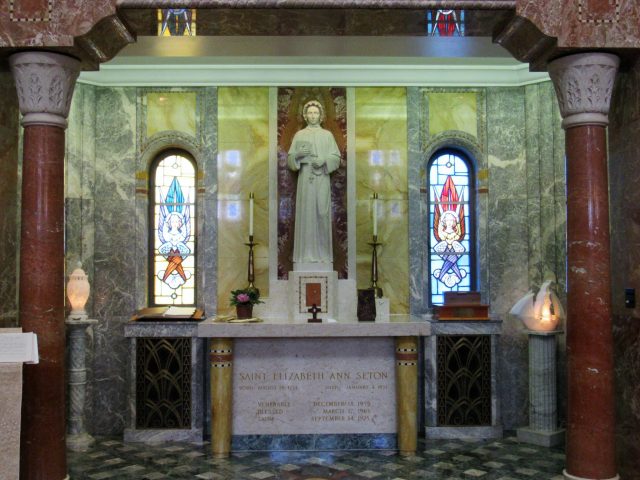 Her feast day is January 4, the anniversary of her death. Her bones are held in the basilica of the National Shrine in Emmitsburg. According to Catholic Online, she is the patron saint “of in-law problems, against the death of children, widows, death of parents, and opposition of Church authorities.”

The first of three

According to Time magazine, in the early 1960s, before Elizabeth was canonized, Italy had 40,000 native-born saints while the US had none at all. But then Elizabeth became the first of three American saints. 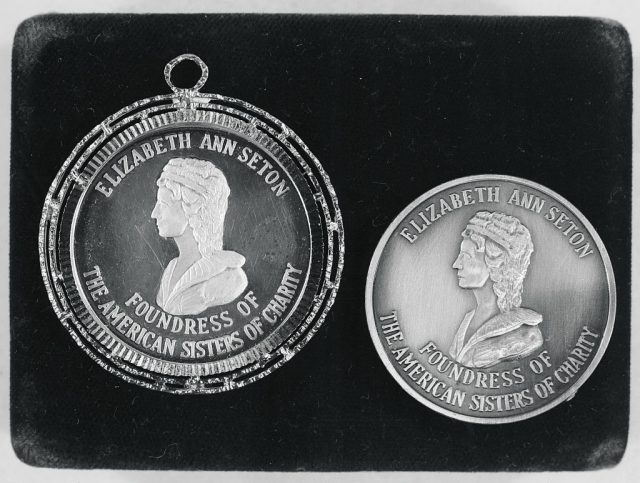 These are commemorative medals issued for the canonization of Mother Elizabeth Seton to take place in St. Peter’s Sept. 14. Mother Seton, founder of Sisters of Charity, will be canonized as first native-born American Roman Catholic saint. (Photo Credit:
Bettmann / Contributor)

More from us: The Saint Behind Santa Claus – Unwrapping the Real St. Nicholas

Katherine Drexel was canonized in 2000 and known as “the millionaire nun,” and she was followed by Kateri Tekakwitha who was canonized in 2012. Kateri lived much earlier, dying in 1680 after many torments from her Mohawk tribe after she converted to Christianity.

« Spider-Man: The Unmade Movie That Was So Far From Home It Was on Another Planet
3500-Year-Old Mummy of King Amenhotep I Has Just Been Digitally Unwrapped »