The Tragic Death of Carole Lombard

After the surprise Japanese attack on Pearl Harbor on December 7, 1941, Americans everywhere did what they could to raise money for the war effort. Hollywood stars were not exempt from doing so – in fact, many big Hollywood names used their star power to help raise funds for American troops. Actress Carole Lombard enthusiastically threw herself into the war effort but tragically died due to her endeavors. Her tragic death made her one of Hollywood’s first casualties of the Second World War. 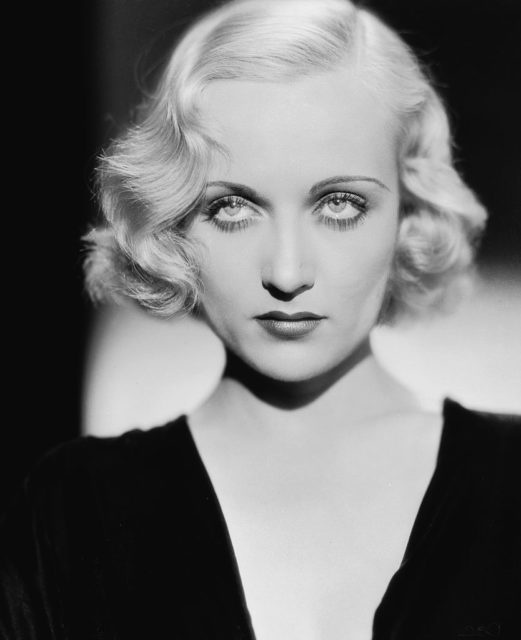 When the United States entered the Second World War in December 1941, Carole Lombard was married to actor Clark Gable, who was the chairman of the actor’s branch of the Hollywood Victory Committee. The duo starred in the 1932 film No Man of Her Own together, but at the time, both were married. Years later, the duo rekindled their friendship which eventually grew into a romance, and they were married in April 1939.

The pair used their collective star power to aid the war effort early on. On December 22, 1941, 15 days after the Pearl Harbor attack, Gable called a meeting of the actor’s branch of the Victory Committee at the Beverly Wilshire Hotel. The event was attended by some of the biggest names in Hollywood at the time, including Bette Davis, Ginger Rogers, Bob Hope, and Cary Grant – just to name a few. This event essentially mobilized Hollywood’s elite, as funds for the war needed to be raised, troops needed entertainment, and wounded soldiers needed to be comforted. 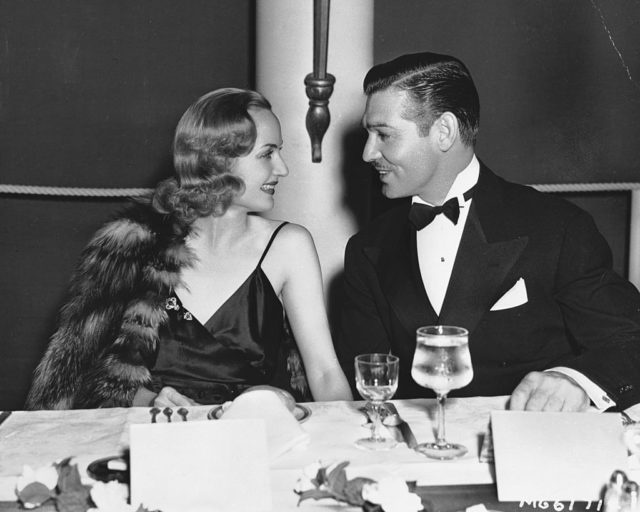 As her husband was the chairman of the actor’s branch of the Hollywood Victory Committee, Lombard was eager to do her part to help American troops. In January 1942, Howard Dietz, the publicity director of the MGM film studio, asked if Lombard would be willing to do a tour in her home state of Indiana to sell war bonds. She agreed and went back to Indiana while Gable stayed home in Los Angeles.

Howard Dietz advised Lombard not to travel by plane, as he feared the reliability and safety of aircraft at the time. Lombard listened to his advice for most of her trip, traveling through Indiana by train. For her tour, the Treasury Department had given her the goal of raising $500,000 – a goal which she smashed. In one evening, Lombard raised $2 million in defense bonds, equivalent to more than $32 million today. 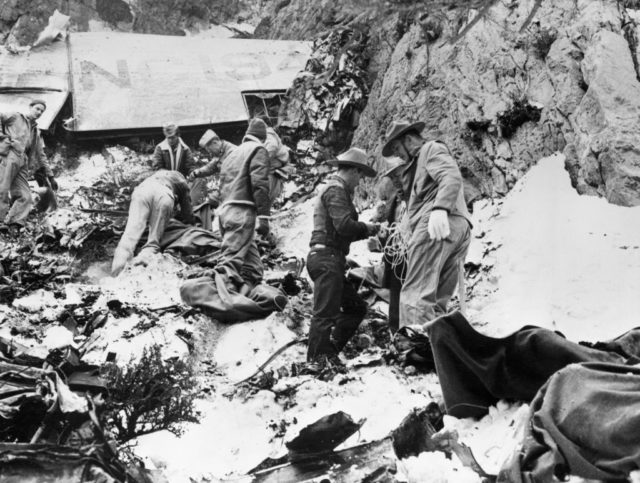 Soldiers prepare to lower the bodies of persons killed in the crash of a TWA airliner, one of which was Carole Lombard. Scattered below the rugged face of the cliff into which it smashed lies the wreckage of the airliner. (Photo Credit: Bettmann / Contributor)

Lombard was due back in Los Angeles by train after her last stop on the tour. However, she didn’t want to spend three days on a train, so Lombard and her mother booked a flight on a commercial airline, on TWA Flight 3, which made a stop in Indianapolis. It is important to remember that commercial flights were in their infancy in the early 1940s. These planes were propeller-driven, didn’t have pressurized cabins, and made frequent stops to refuel.

On the night of January 16, 1942, the TWA DC-3 plane stopped for a refuel in Las Vegas, which at the time was only a small town with a small airport. However, shortly after the plane took off again, it crashed into a small cliff near the top of Potosi Mountain. The crash killed all 22 people on board instantly. 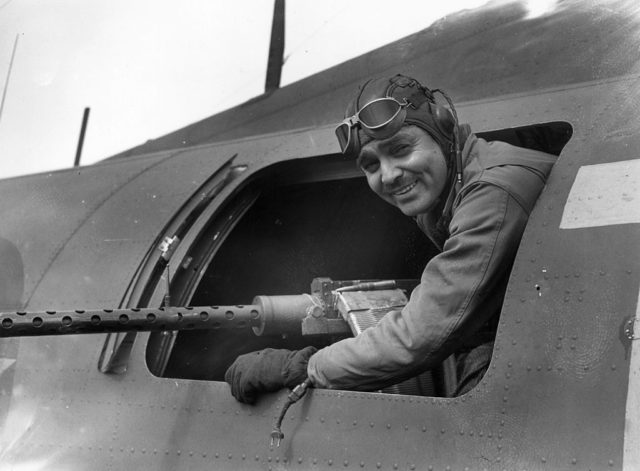 7th June 1943: US film actor Clark Gable, who is serving as a gunnery instructor with the US Army Air Force ‘somewhere in England’, manning a weapon aboard an aircraft. (Photo Credit: Keystone/Getty Images)

Upon hearing news of the crash, MGM’s Louis B. Mayer, Eddie Mannix, and Clark Gable immediately traveled to Las Vegas. Gable, hopeful his wife had survived, stayed at the hotel while Mannix went to the crash site. When Mannix arrived with the rest of the rescue crew, a gruesome scene awaited them. The waist-high snow was sprinkled with blood and personal effects of the passengers. The bodies of the passengers were unidentifiable at first glance. Shortly after arriving at the crash site, Mannix sent Clark Gable a telegram that read, “No survivors. All killed instantly.” Supposedly, all Mannix could find was a strand of blonde hair Gable would always believe came from Carole Lombard.

More from us: 9 Outrageous Rules Actors Had to Follow During Hollywood’s Golden Age

Clark Gable was never the same after his wife’s death. In August 1942, he decided to enlist in the U.S. Army Air Force, and he spent most of the war in the United Kingdom. After he died in 1960, he was buried next to Lombard at Forest Lawn Cemetery in Glendale, California.