John F. Kennedy was the 35th President of the United States. While many aspects of his short life have made news over the years, one thing we didn’t expect to be brought to our attention was his Harvard entrance essay. It resurfaced online some 87 years after it was written and people have a lot of thoughts about it. 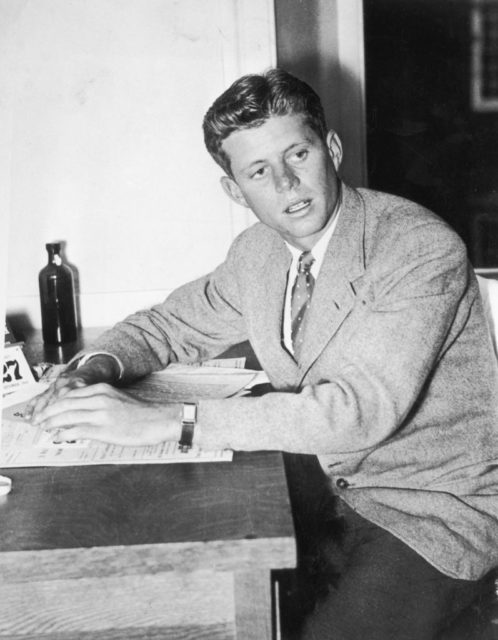 The short essay was posted to Twitter by a user who shared it along with the caption, “YALL IM CRYING PLEASE LOOK AT THIS!!!!” The tweet has since gone on to be retweeted over 5,500 times and has received more than 68,000 “likes.”

The essay was written on April 23, 1935 as part of Kennedy’s college admission package and was prompted by a single question: “Why do you wish to come to Harvard?” As we’re used to hearing his spectacular speeches from his time in politics, the then-17-year-old Kennedy’s response is a little underwhelming.

“The reason that I have for wishing to go to Harvard are several. I feel that Harvard can give me a better background and a better liberal education than any other university.

“I have always wanted to go there, as I have felt that it is not just another college, but is a university with something definite to offer. Then too, I would like to go to the same college as my father. To be a ‘Harvard man’ is an enviable distinction, and one that I sincerely hope I shall attain.”

The essay has received a lot of attention, with many Twitter users sharing their thoughts on the few-sentence piece. One user wrote that they’ll “never cringe or feel ashamed about my mission/research statements,” while another said it was “the worst college essay I’ve ever read.”

There’s also been discussion over how different standards were back then, due to the fact that college essays were largely handwritten and had a low word count, with others bringing up what they feel was Kennedy trying to use his father’s position in society to get accepted into the school.

Some even called the former President out for how similar this essay was to the one he wrote for Princeton.

More from us: How Did JFK Get So Rich? The Story Behind the Kennedy Fortune

Those wishing to view the physical document can do so by visiting the John F. Kennedy Presidential Museum and Library in Boston, Massachusetts.

« The Crown: How Netflix Casts the Controversial Royal Drama
Cold As Rice: How Meals Turned Deadly in 19th Century Japan »