How Did JFK Get So Rich? The Boozy Story and Business Savvy Behind the Kennedy Fortune

John F. Kennedy was a handsome and popular president who made an impact – both with the way he conducted himself and the circumstances surrounding his tragic death.

He also happened to be extremely rich, thanks to the family fortune. JFK wasn’t the first man of inherited means in the White House. And he certainly wouldn’t be the last.

How did the Kennedys boost their bank balance and launch themselves onto the political scene? A potted history is below.

The beginnings of the Kennedy fortune

Patriarch Joseph P. Kennedy was born in 1888. His parents were businessman and politician Patrick Joseph and Mary Augusta Kennedy. They lived in Boston, Massachusetts. 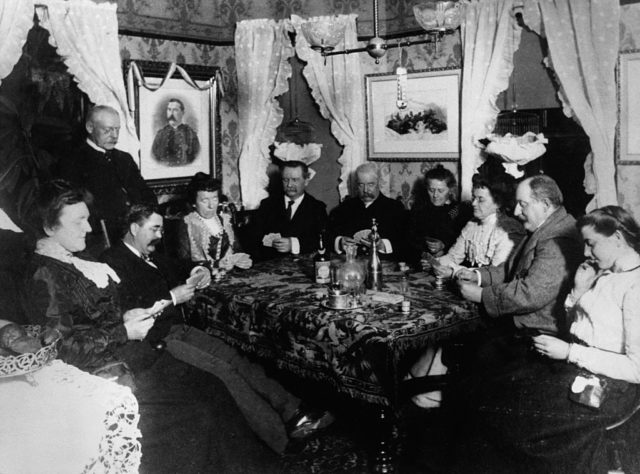 While young Joseph’s upbringing was comfortable, he wouldn’t make serious money until his 20s. The stock and commodities market became a playground of sorts for this up-and-coming figure. He invested and sold wisely. His instincts saved him during the Great Depression (1929 – 33), where he backed away and swerved the downturn.

He’d married Rose Fitzgerald some 15 years earlier. Joseph Jr, future President John, Rosemary, Kathleen, Eunice, Patricia, Robert and Jean had all been born in the intervening years. Edward came into the world during the Depression, bringing the total to nine children.

The family led a good life, as Joseph Kennedy grew an enviable portfolio. Luck was on his side early on and it continued to back him as he expanded into areas such as real estate. 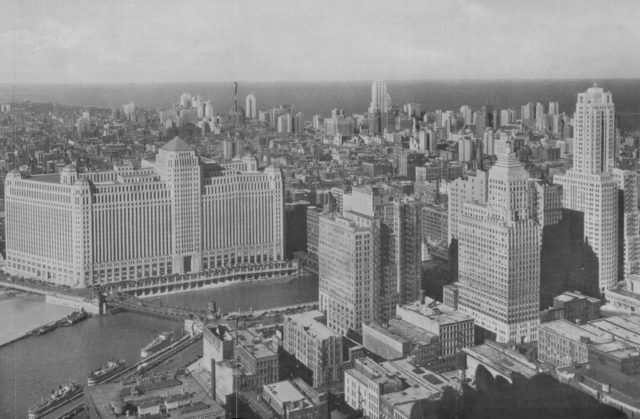 PBS mentions the Merchandise Mart in Chicago. A commercial premises, it also happened to be the largest building on Earth! It may have lost that title but still stands in 2022. theMART, as it’s now known, was just one of Kennedy’s lucrative acquisitions.

Alcohol flowed as the dollars rolled in. And Joe Kennedy wasn’t just quenching his thirst. The post-Prohibition demand for refreshment led to him making even more money.

Kennedy Sr.’s life could be said to follow his father’s. Patrick Joseph, or P.J., ran a business importing whiskey, as written about by History.

P.J. went into politics and it was clear his son would do the same. However, Joseph’s ambitions took him to loftier heights. Soon, he would find himself in the same room as British Prime Minister Winston Churchill.

As described by Time, Kennedy headed to the UK under his own steam. Or rather, by steamship. In a foreshadowing of things to come, he also took part of the White House with him… James Roosevelt, whose father was Commander in Chief Franklin D. Roosevelt. 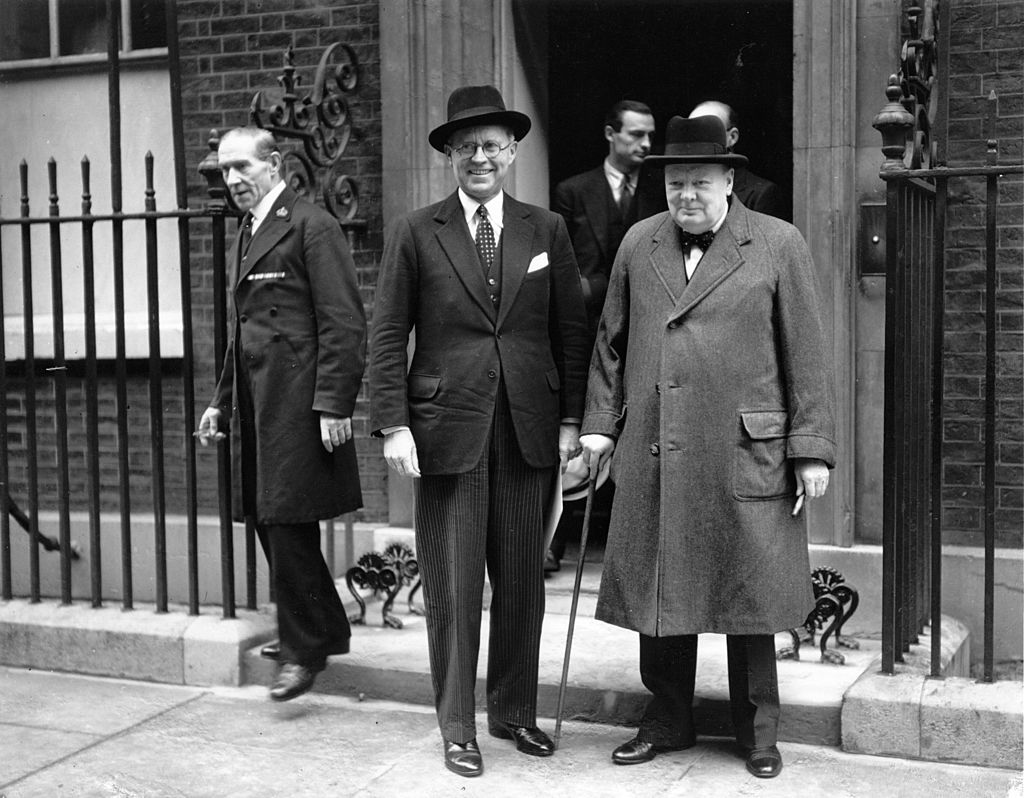 The year was 1933. Prohibition had been gnawing away at the USA for 13 long years. Finally, the end was in sight, and Kennedy wanted to flood his wallet with boozy bucks.

He established the company Somerset Importers, with the aim of bagging import rights for Great British alcohol. An English name for an English mission, perhaps. Time writes that “Somerset became his piggy bank for cashing in on Prohibition’s demise.”

Getting in a room with Winston (a man who enjoyed a tipple himself) meant access to not just Scotch whiskey, but gin and other high-quality clock cleaners. The meeting occurred at Chartwell, Churchill’s former home and now a National Trust property, facilitated by James Roosevelt.

Did golden boy Kennedy get his wish…? What do you think?

It got to the stage where son John F. Kennedy was filthy rich but not paying bills. How? Well, he did pay them. Or rather, Joe did. Just not at the time. PBS mentions the tendency of those around JFK to reach into their pockets, safe in the knowledge that a refund would follow from Kennedy HQ. 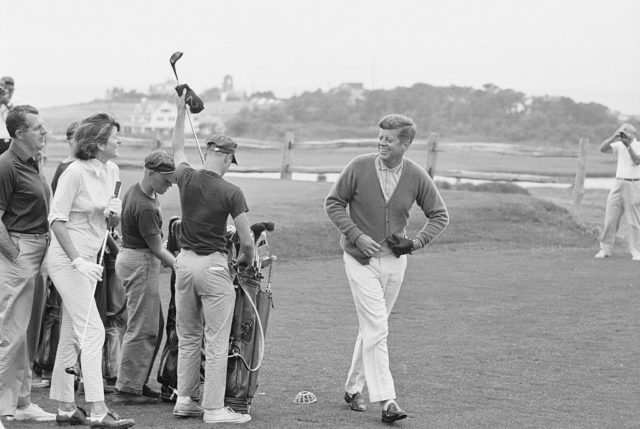 Hyannisport, Ma.: President Kennedy smiles at sister Pat, after driving off the first tee, here today. The President and Pat. Mrs. Peter Lawford, played a short round of golf, after the usual boat ride aboard the Honey Fitz. (Photo Credit: Bettmann / Contributor)

It should be noted that JFK gave money away as well as sat on it. His salary of $100,000 went to good causes. Nevertheless, he ranks among the most loaded occupants of the Oval Office. Booze or no booze, this guy wasn’t short of a few bucks.

The Kennedys became a political dynasty, which was in large part due to Joseph’s influence. He had his own power base, with roles including director of the Maritime Commission and Ambassador to the United Kingdom. 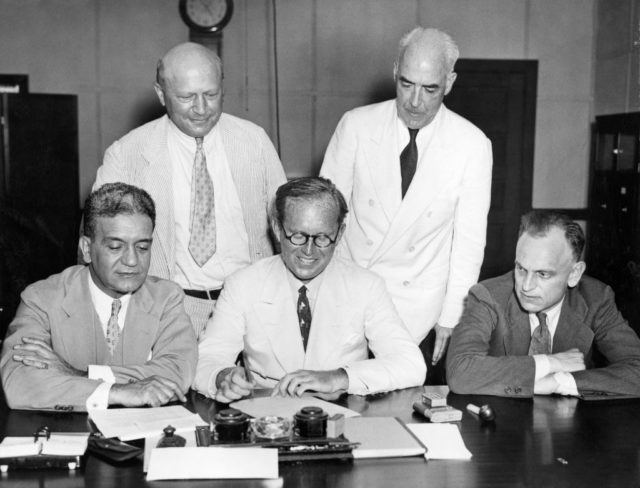 The Stock Exchange Control Commission in their first meeting here today, at which Joseph P. Kennedy, of New York, was named chairman of the body. Kennedy, said to have been President Roosevelt’s choice for the chairmanship, was appointed to the post after a two-hour conference among the Democratic members of the body, Kennedy, Ferdinand Pecora, and J.M. Landis.  (Photo Credit:
Bettmann / Contributor)

As World War II broke out, the shine came off Joseph Kennedy. His reputation was soured by pursuing appeasement with Hitler. He wasn’t a fan of assisting the Brits, both financially and militarily. Accusations of antisemitism surfaced.

One of his biggest blows was self-inflicted. He took himself and his family out of London to avoid German bombs, when many felt he should have stayed and braved the attacks with everyone else. His presidential ambitions went unfulfilled, though future generations achieved that goal for him.

He may have profited from British booze, but did Joseph Kennedy feather his nest with bootlegging proceeds? This is the belief in some quarters. PBS writes that Kennedy “later sold his legitimate liquor importing business to a known mobster named Abner ‘Longy’ Zwillman.” 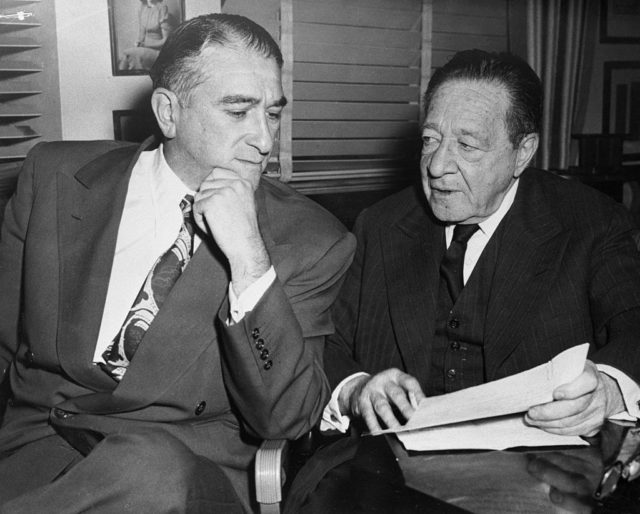 Biographer David Nasaw isn’t convinced. Speaking to History, he reckons Joe “wasn’t going to cross that line.” Why? The answer lies in his immigrant heritage. As his children were “already tarred with the brush of being Irish Catholic,” he wasn’t prepared to jeopardize their futures for the sake of a tidy sum. Nasaw also thinks the intense scrutiny he came under from political rivals, including Richard Nixon, would have resulted in any scandals coming to light.

How the Kennedy coffers fueled a legacy in Washington

Joseph Kennedy passed away in 1969 at the age of 81, leaving behind a fortune worth $500 million, according to reports.

His rise had been meteoric and his time notable, though the misfortunes piled up. For example, he suffered a devastating stroke in 1961, leaving him with the speech-affecting brain condition aphasia. 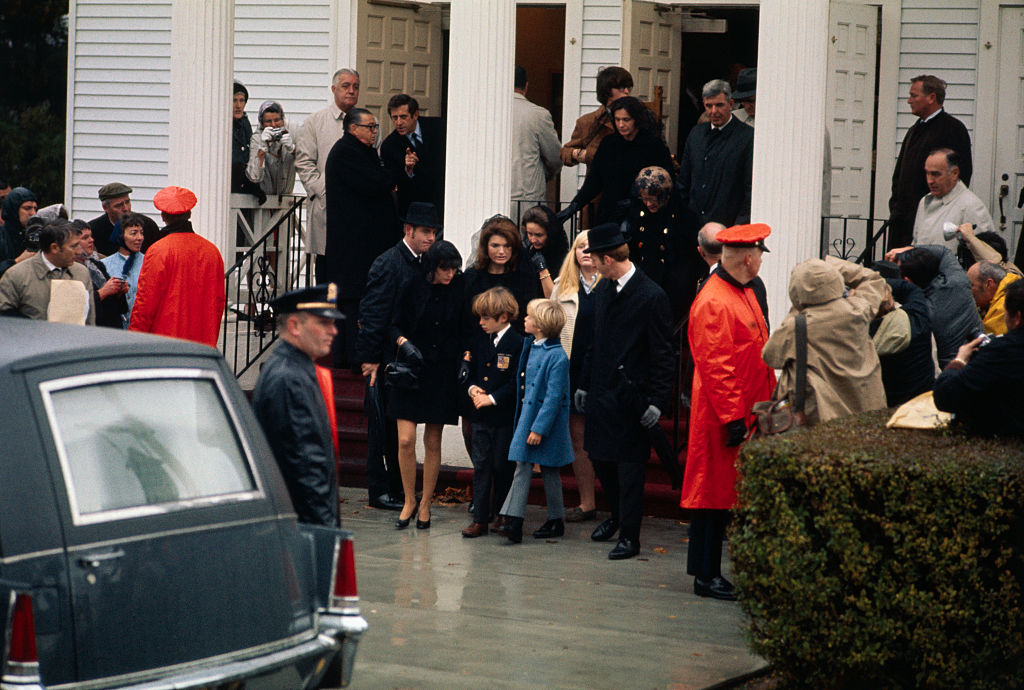 The tragedies that struck his children cut deep. John was assassinated in 1963, with the same fate befalling Senator Robert Kennedy in 1968.

Eldest son Joseph was killed during World War II. The youngest Edward was involved in the death of Mary Jo Kopechne, a campaign strategist, in 1969. He crashed their car into the water at Chappaquiddick Island and didn’t report the accident until later.

More from us: 8 Touching Details From John F. Kennedy’s Funeral

Rosemary Kennedy experienced mental health issues and was lobotomized in 1941. This shocking and highly controversial decision was taken by Joseph