Ricky Nelson: The Sitcom Star and Chart Topper Who Gave Elvis a Run for His Money

Elvis Presley may be the King but Ricky Nelson was also showbiz royalty. Not that he saw himself like that – he appeared unassuming and thoughtful throughout his long career in music and entertainment.

Yet like Presley, Nelson had fans screaming his name in large numbers. In fact, the term “teen idol” apparently didn’t exist before Ricky came along.

How did it all start for him? His origins are squeaky clean. A little too squeaky, you might say.

Beginnings with Ozzie and Harriet 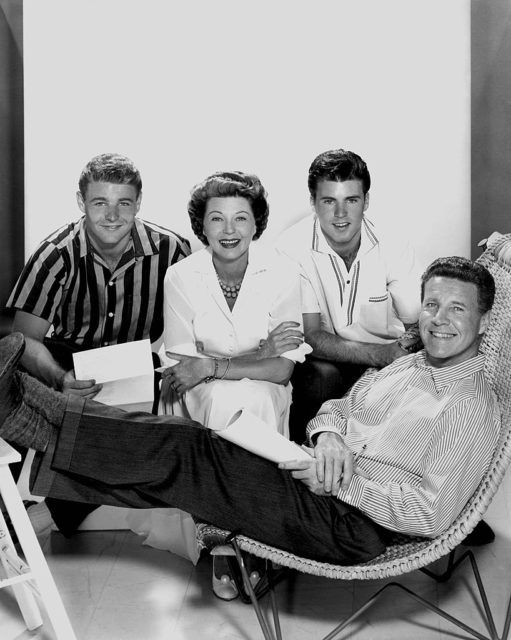 Nelson entered the spotlight through his parents, Ozzie and Harriet. He was born Eric Hilliard Nelson in 1940, with his brother David born a few years earlier.

The clan’s legendary sitcom – The Adventures of Ozzie and Harriet – ran for 14 years. Young Ricky joined the cast at just 8 years old. What was it like growing up on network TV? Fairly tough, according to Nelson’s son Gunnar.

“Ozzie reminded them that 45 people — including their own parents — would be out of work if the boys acted like typical teenaged idiots,” he revealed, quoted by Closer Weekly. That certainly put a dent in any hormone-fuelled high jinks! 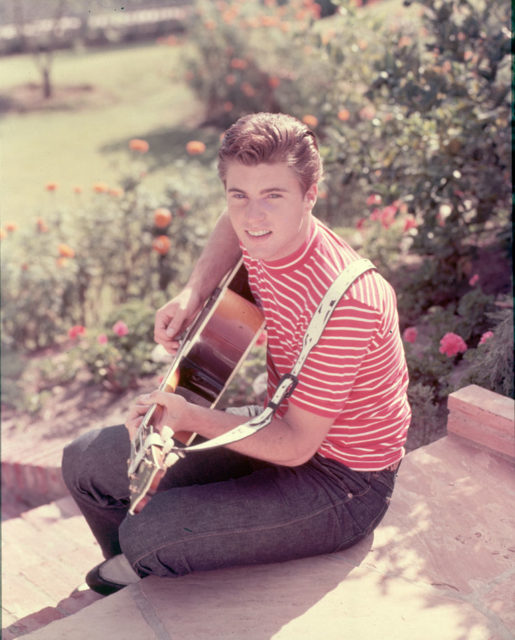 Picture shows teen idol/singer, Ricky Nelson, seated on a step outside playing the guitar. He is looking at the camera and wearing blue jeans and a red, striped t-shirt. Undated photo circa 1950s. (Photo by LGI Stock/Corbis/VCG via Getty Images)

Despite being part of a famous family unit, Nelson established himself as a recording artist. His first single, “A Teenager’s Romance,” written by Theodore Gillum, came out in 1957.

The audience for Ozzie and Harriet realized there was more to this boy than met the eye. Nelson’s debut album hit the top of the charts. He went on to become more identified as a singer and musician, though he wasn’t prepared to remain a clean-cut teen idol. More on that shortly.

He made a major impression on the big screen 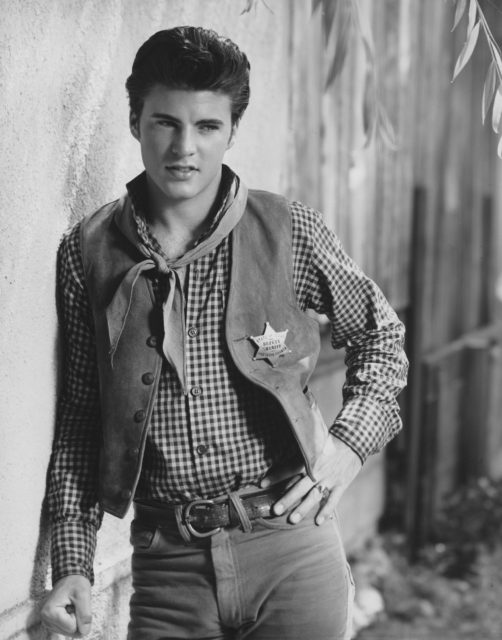 His good looks and charisma made him a shoo-in for Hollywood. There’d been a Nelsons movie in 1952, a feature-length pilot which preceded the show. Little did Ricky suspect that greater things were ahead.

1959’s Rio Bravo is one of the all-time classic Westerns. Nelson found himself alongside John Wayne and Dean Martin, not to mention being directed by Howard Hawks. The fledgling actor’s talents weren’t a flash in the pan. A Golden Globe nomination for “Most Promising Male Newcomer” followed.

Another notable role was in Jack Lemmon comedy The Wackiest Ship in the Army (1960). During the 1970s, Nelson appeared in small screen staples such as McCloud, Petrocelli and The Streets of San Francisco.

From Ricky to Rick: a musical reinvention 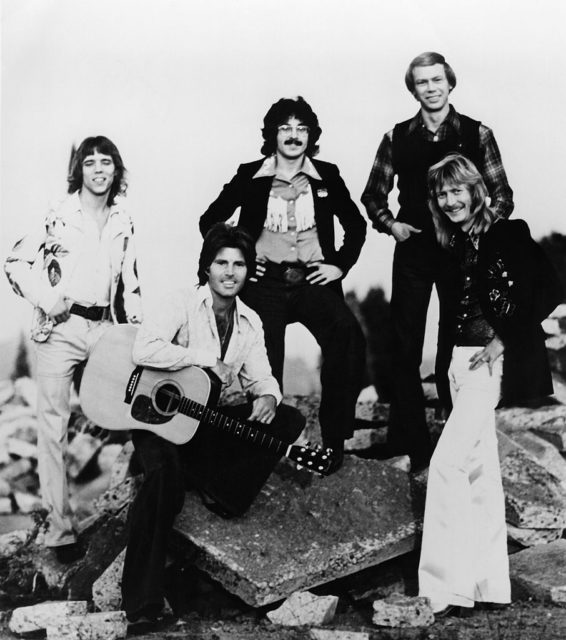 Being part of a long-running sitcom is a challenge for anyone, no matter how talented in their own right. As the 1980s got going, the associations with Ozzie and Harriet were still there. For example, David Letterman quipped during a Tonight Show interview: “I guess you moved out of Mom and Dad’s place?”

For the previous couple of decades, Nelson had performed as “Rick” rather than “Ricky.” Unfortunately, as he got older, he became old hat to young listeners. The Beatles and the Stones changed the musical landscape and the grooviest decade in history didn’t especially rate a guy like Rick. But he wasn’t in the wilderness for long.

New pastures awaited. Country-rock wasn’t much of a thing before Rick got involved. And his input gave rise to the California Sound, resulting in the chart success of The Eagles and many others.

Nelson’s final meeting with the Top 40 came via “Garden Party” (1972), a song and album produced with Nelson’s Stone Canyon Band. The track famously came from a less than happy experience at a 1971 concert in Madison Square Garden.

The crowd reacted badly to his performing a country cover of a Rolling Stones classic. Or was that just his interpretation? Some claim the police had drawn the audience’s anger and Nelson got the wrong idea.

Either way, he wasn’t a man who liked to sit still. “If memories were all I sang, I’d rather drive a truck,” Nelson said at one point. 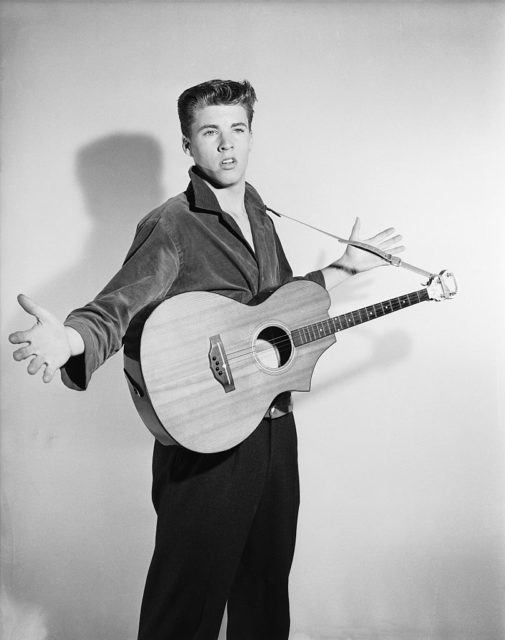 While Rick’s musical star ascended after Elvis burst onto the scene, the pair are still linked. Not just as chart-toppers and trendsetters but in other ways too.

In fact, if it wasn’t for Elvis, Nelson may never have had his first hit. “A Teenager’s Romance” came because he wanted to show his Presley-admiring girlfriend that he could do the same thing. That said, Nelson was already interested in music.

Speaking to David Letterman, he mentioned his friendship with Elvis. The pair socialized and felt comfortable together, having shared similar experiences: “We could relate, no-one had anything to prove to each other.”

One arguably complemented the other in the hearts of American youngsters. “Ricky was an introvert, Elvis was an extrovert,” Rick’s son Matthew tells Clay Today, “so a lot of kids related to him for that.” 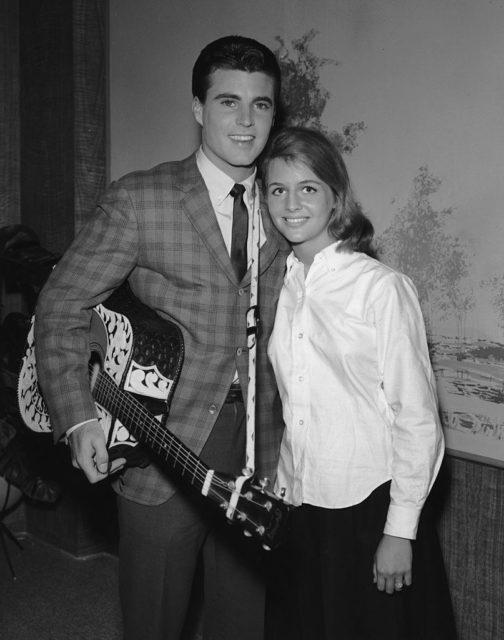 In 1963, Nelson married Kristin Harmon, an actress who went on to appear in The Adventures of Ozzie and Harriet. The marriage ended in 1982, with their marital difficulties much-publicized. Rick and Kristin’s children include Sam Hilliard Nelson and actress Tracy Nelson, who found fame as Sister Steve in The Father Dowling Mysteries (1987-91). 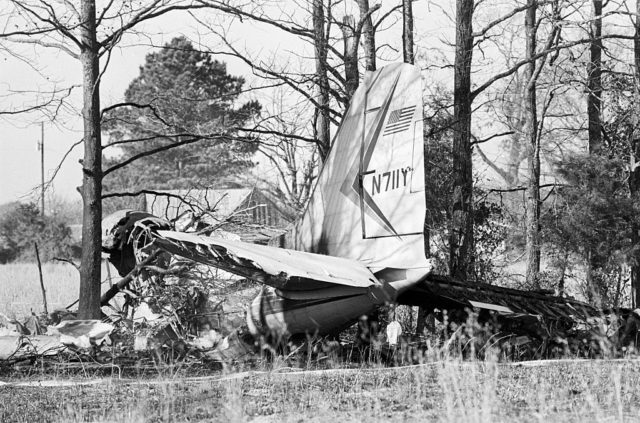 Sadly, Nelson’s life ended abruptly when he, his fiancée Helen Blair and members of the Ricky Nelson Band died in a plane crash. It was a Douglas DC-3 owned by the star.

Reporting in 1987, the Los Angeles Times states the crash “was caused by a fire that started in the cabin but apparently was not ignited by passengers using drugs.” A heater has been identified as the likely source of the flames. The two pilots, who survived the accident, reportedly contradicted each other over the state of the heater.

Speculation intensifies with the news that Nelson was afraid of flying, and that after he bought the plane it suffered a surprising number of mechanical issues. Whatever happened, Nelson’s loss stunned the world. All seven passengers lost their lives. 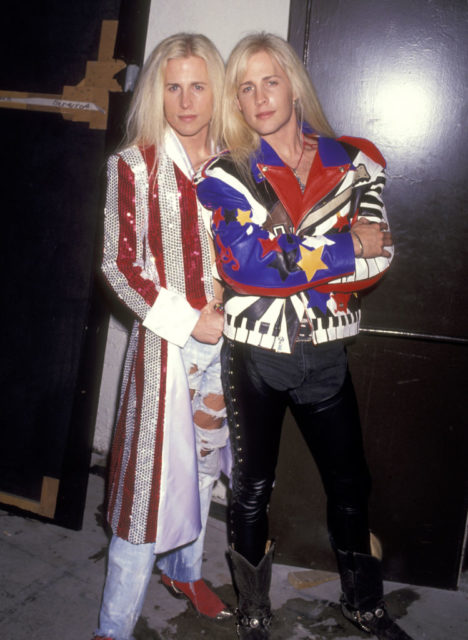 Twin sons Matthew and Gunnar formed the band Nelson/Ricky Nelson Remembered and are currently performing a show that celebrates their father’s music. The Nelsons are in the Guinness Book of Records for entering the charts across three generations. What better tribute to the talent of Ozzie and Harriet’s brilliant boy?