From ‘Batman’ to ‘Sleepless in Seattle,’ What Happened to the Stars of ‘Top Gun’?

Top Gun introduced the world to some famous names. Alongside Tom Cruise as “Maverick,” a fair few actors got a career boost in director Tony Scott’s 1980s classic. You might say they really took off!

The much-anticipated sequel is due in 2022. In the meantime, let’s look back on how the stars fared post-flight…

This cult screen villain took the role of flight instructor Rick Heatherly. He was also known as “Jester,” possibly a surprise to those who’d watched Michael Ironside raise hell in horror movies like Scanners (1981).

Ironside continues to enjoy a long and varied career. In 2021 he appeared in the action movie hit Nobody with Bob Odenkirk. A similar authority role to Top Gun happened back in the 1990s, when he took over from Roy Scheider as Captain of seaQuest DSV. Whether good or bad, you clearly cross Ironside at your peril. 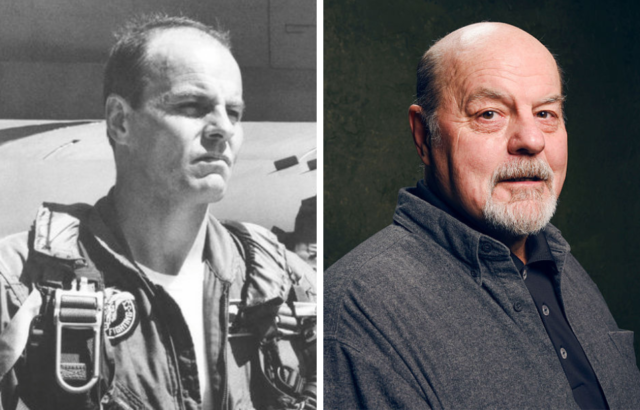 A familiar face from teen comedy Revenge of the Nerds (1984), Anthony Edwards suited up and took to the skies as Lt. Nick Bradshaw… better known as “Goose,” Maverick’s best pal!

Edwards starred in various movies and shows. However, he cemented his status as a household name through ER, playing Dr. Mark Greene between 1994 – 2002. He also works as a producer. In 2022, Edwards portrayed finance fixer Alan Reed in Netflix’s Inventing Anna.

Without giving too much away, Edwards won’t be back for Top Gun 2. However, Miles Teller is filling his shoes as Goose’s son. 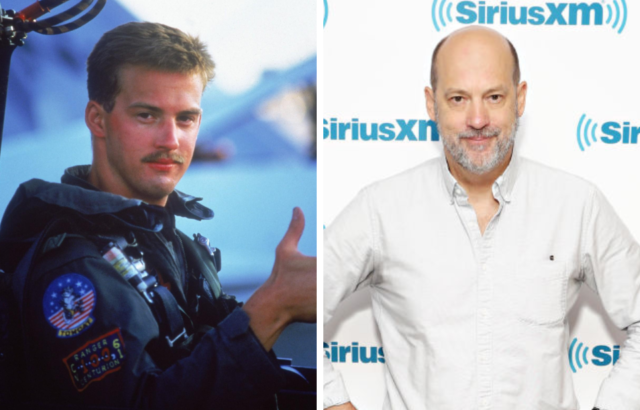 If you don’t know James Tolkan’s name, you probably know his face. He’d already appeared in some 1980s classics in the run-up to Top Gun. WarGames, The River (both 1984), Back to the Future (1985)… Tolkan played a lot of authority figures, be they detectives, school principals or servicemen. He even took on Napoleon, in Woody Allen’s Love and Death (1975).

As Commander Tom Jardian, aka “Stinger,” he was the man who cleared Cruise and Edwards for Top Gun status. Though not without a tongue lashing!

Tolkan went on to take another cult role, that of Detective Lubic in 1988’s Masters of the Universe. 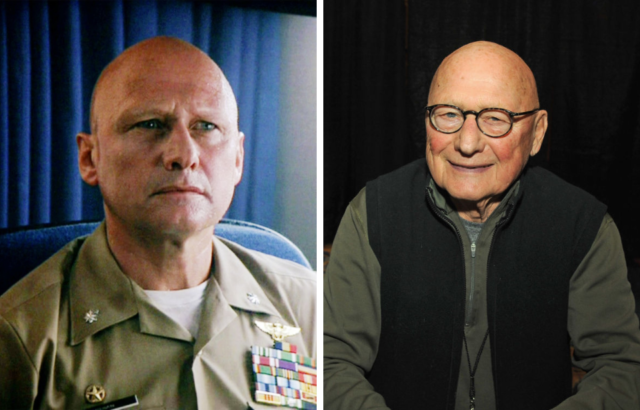 Is there a greater compliment for an actor when a role is created specifically for them? The young Adrian Pasdar joined the cast as Charles “Chipper” Piper. His audition reportedly knocked it out of the park, and led to the character being introduced specially.

After Top Gun, Pasdar starred in vampire classic Near Dark and was noted for playing the title role in the ground-breaking (if short-lived) drama series Profit in 1996. Nathan Petrelli in Heroes (2006-2009) and numerous voice roles for Marvel are just some highlights from his resume. He’s also a director. 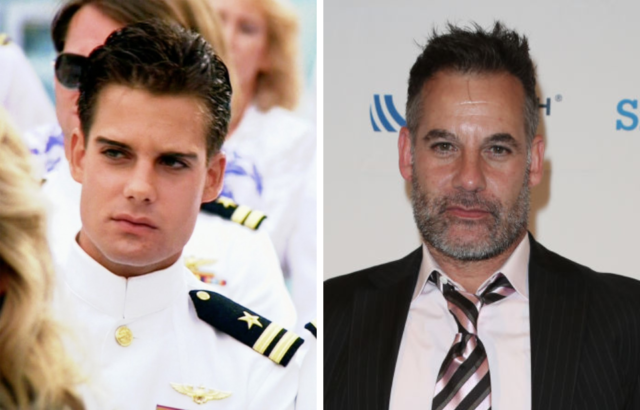 Meg Ryan’s first high-profile big-screen role was arguably in Top Gun, as Goose’s partner Carole. She then became associated with romantic comedies after starring in the iconic When Harry Met Sally… (1989), directed by Rob Reiner and co-starring Billy Crystal.

She worked with Tom Hanks in Joe Versus the Volcano (1990), Sleepless in Seattle (1993), You’ve Got Mail (1998) and Ithaca (2015), which she directed. Ryan also made the thriller In the Cut with director Jane Campion and played a variety of other characters. I.Q. was a 1994 comedy that cast her opposite Tim Robbins, another graduate of Top Gun. 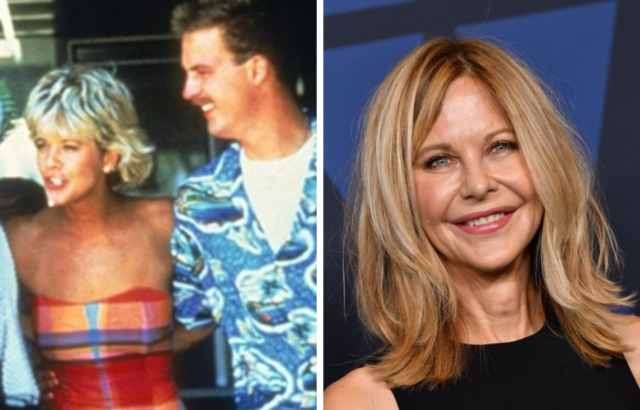 Cruise may have been the hero, but the audience’s breath was also taken away by Val Kilmer. His performance as Tom “Iceman” Kazansky is remembered to this day.

Kilmer made a splash as Jim Morrison in Oliver Stone’s The Doors (1991), Elvis in True Romance (directed by Top Gun’s Tony Scott in 1993) and of course Bruce Wayne in Joel Schumacher’s Batman Forever (1995). This was a one-off stint in the Batcave, though he had another shot at a franchise, care of 1997’s The Saint.

What happened to Iceman in the years following Top Gun? We’ll find out in the sequel, where he’s been promoted to Admiral! 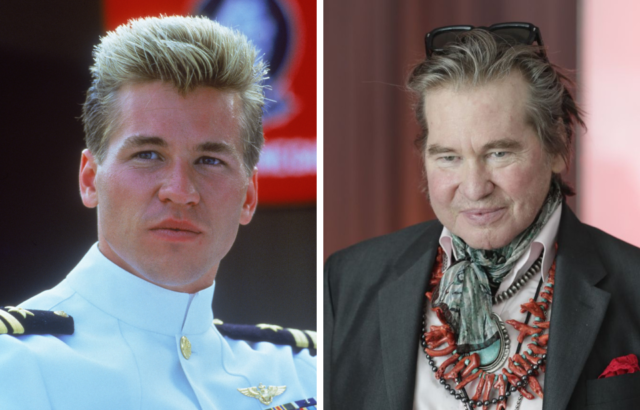 Charlie Blackwood was the flight instructor who wound up riding around on the back of Tom Cruise’s bike. Playing the role was Kelly McGillis, who the previous year has starred with Harrison Ford in director Peter Weir’s acclaimed Amish drama Witness.

She saw out the eighties in some well-received films, notably 1988’s The Accused with Jodie Foster. Recognized as an accomplished stage actress, McGillis continued to act onscreen, appearing in the horror remake We Are What We Are with Julia Garner (2013). A reunion with Val Kilmer happened in 1999 (At First Sight). 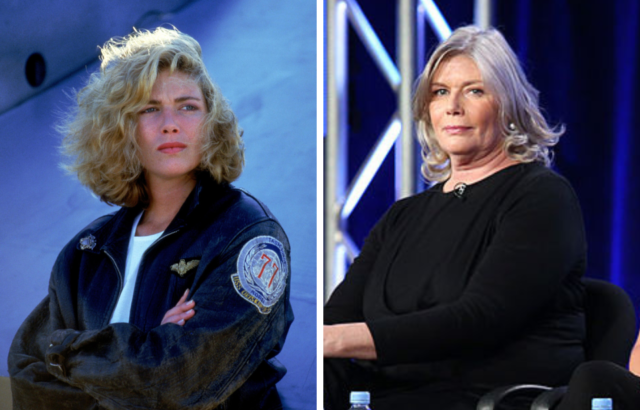 Well, didn’t this guy just disappear off the map? Only kidding. Risky Business (1983) was a high-profile job for Tom Cruise and Top Gun would send him skyward in more ways than one.

A guarantee of box office success, Cruise found time to reteam with director Tony Scott for the racing drama Days of Thunder (1990). He’s worked with some of the best-known helmers in the business, including Martin Scorsese and Steven Spielberg. The latter he made two films with – Minority Report (2002) and War of the Worlds (2005). 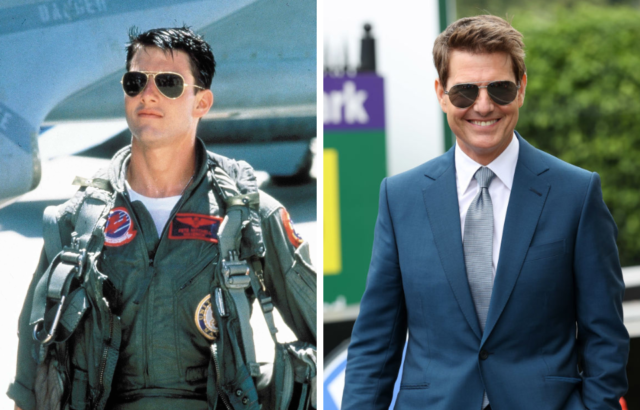 More from us: Maverick Facts About Tom Cruise

In 1996 Cruise starred in a big-screen remake of Mission: Impossible. Decades later, he’s still thrilling audiences as Ethan Hunt, famously performing his own hair-raising stunts. Six movies have been released to date, with another couple in production.