After 25 years of excavating the island of Lesbos in Greece, a professor of geology at the University of Aegean, Nikolas Zouros and his team of 35 archeologists made an unbelievable discovery.

The discovery was made between the cities of Kalloni and Sigri, approximately 20 kilometers apart. With Zoulos’ excavation team having already worked on the area for years with little success, construction crews were preparing to cover the area in a layer of asphalt to build up that part of the highway.

By almost pure luck, one technician spotted a small branch sticking out of the ground and began to dig. As the team continued to work, they realized construction would need to be canceled. It was in this spot that they unearthed a 17 to 20-million-year-old tree, 19.5 meters long, with its branches, roots, and even its leaves still intact.

Tree more than SEVENTEEN MILLION YEARS OLD found on Lesbos in the petrified forest. Theophrastus only invented Botany there about 2,350 years ago. https://t.co/N7Nst4om4D pic.twitter.com/AIsDR0Tzx3

Not the only discovery

Discovering this tree and the shape it was in was incredible enough. But not three weeks following this finding, Zoulos’ team discovered another 150 fossilized logs just a short distance from the original tree. Preserved under a layer of lava and ash dated back to the Miocene period, these fossils are vividly colored and make up a large part of an open-air museum on the island.

The island of Lesbos is a hub for excavating fossils buried under the volcanic eruptions that occurred in the area millions of years ago. On the island, the Natural History Museum of the Lesvos Petrified Forest serves as one of the largest UNESCO global geoparks in the world, spanning nearly 35,000 acres of land. In order to preserve it in its current state, the massive tree has been relocated from its original location and is surrounded by a shelter to protect it from the elements. 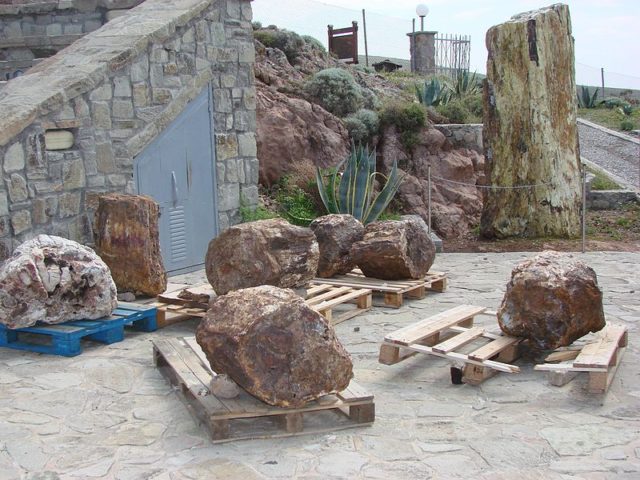 The unearthing of the tree and the surrounding logs has provided scientists with a deeper understanding of the ecosystems that existed in the region millions of years ago. The first forests inhabiting the area of Lesbos were vastly different than the Mediterranean vegetation seen on the island today; they were subtropical.

An intact, petrified, 20 million-year-old tree was found in Lesbos, Greece. The Lesbos' Petrified Forest was formed when a volcano exploded in the island's north, covering the entire area with ash and lava. Click here to read more on @CTV news: https://t.co/X7YAp7qEgK pic.twitter.com/vmbT4Uyehk

More from us: Fossilized Remains of 90-million-year-old Rainforest Found Under Antarctic Ice

Scientists have been able to determine a variety of flora species that once inhabited Lesbos but have since gone extinct. They have concluded that these florae were unable to adapt to the changing climate, information researchers are using to critically analyze the current global climate crisis and its effect on wildlife.

These species “could not survive climate change,” Nikolas Zouros said. “This is important information we can use in order to explain to visitors that climate change has severe consequences to the species living here, to the modern ecosystems.”

« Remembering the Notorious Viper Room as It Closes Its Doors for Good
Are These the Most Important Photographs in History? »