Carmen Miranda brought Brazilian samba to North America. She helped to pave the way for Latin culture to be embraced in the US and got everyone wanting to learn how to shake their hips. Iconically remembered for her one-of-a-kind fruit hats, she rose to stardom and met unexpected controversy among her Brazilian fans before she ultimately met a tragic death.

1. She was born in Portugal 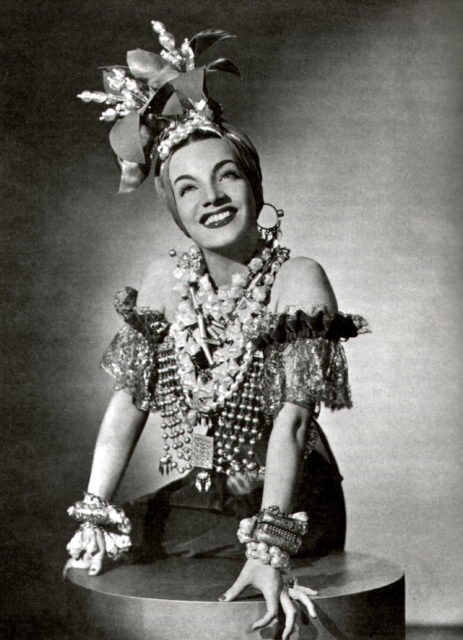 Considering the fact that she became the most popular representation of South American, specifically Brazilian, culture during her lifetime, it might come as a surprise that Carmen Miranda wasn’t even born there. Instead, she was born in Marco de Canavesses, Portugal on February 9, 1909. Her father was a traveling salesman and moved from Portugal to Brazil to open up a barbershop. Her mother followed him with their two daughters, Olinda and Carmen, the following year. Carmen had just turned one, so she pretty much spent her entire childhood growing up in Rio de Janeiro. Surprisingly, she never gave up her Portuguese nationality.

2. She worked at a hat boutique 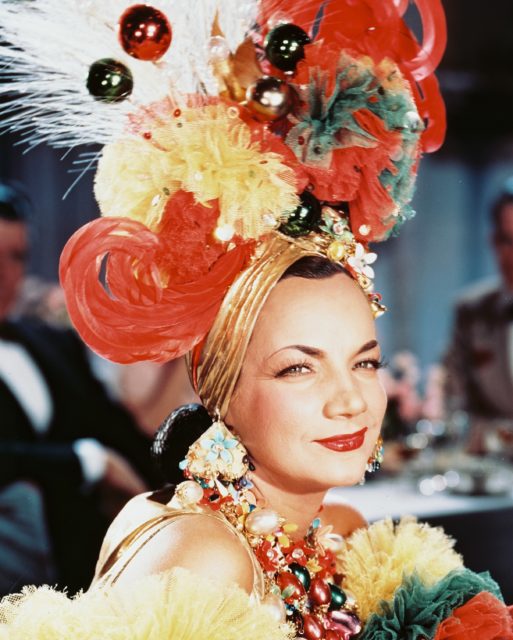 Carmen became eternalized for her over-the-top fruit hats and platform shoes. But despite the fact that her get-up was an exaggeration of the Brazilian culture Hollywood was trying to portray, she actually began working in a hat boutique at the age of 15 – before her start in music. At the boutique, she would come up with new designs, many of which could have inspired the fun, exotic hats that we remember Carmen wearing today. Supposedly, her ionic tutti-frutti hat inspired the United Fruit Company’s Chiquita Banana logo.

3. She began her music career singing on radio shows 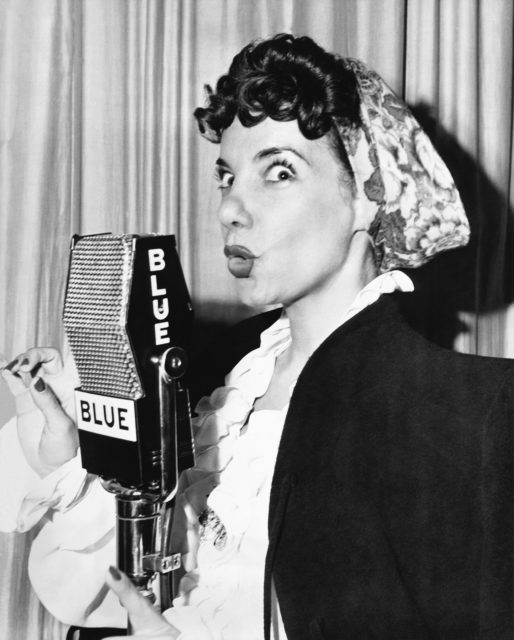 In 1929, Carmen made her start in music when she recorded her first album – which did alright. The following year, she recorded “Prá Você Gostar de Mim,” written by Joubert Carvalho, which shot her to Brazilian stardom. The record sold like hot cakes and she became the embodiment of Brazilian samba. That was the push she needed to truly pursue her music career, and she recorded more and more music, eventually traveling around the country to perform at various radio stations.

4. She was discovered at a casino 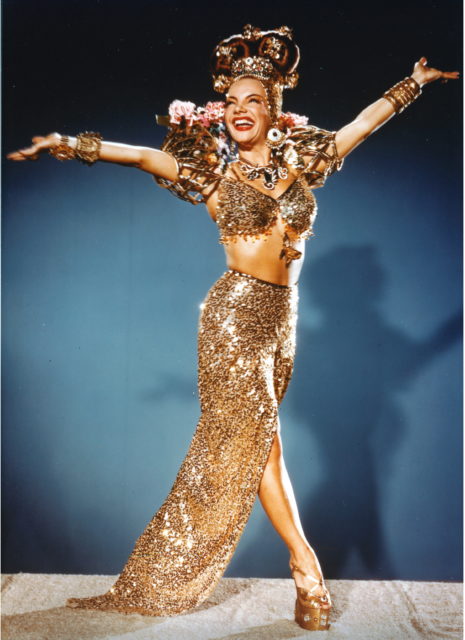 Her music career really took off in Brazil. One night, while performing a stage show at one of Rio’s most famous casinos, Casino Urqua, she had no idea that there was a New York Broadway producer in the audience. He was Lee Shubert, and he was so entertained and enamored with her performance that when she finished her show, he invited her to America to perform in the Broadway review of The Streets of Paris on an eight-week contract. She happily accepted.

5. She landed a contract with 20th Century Fox 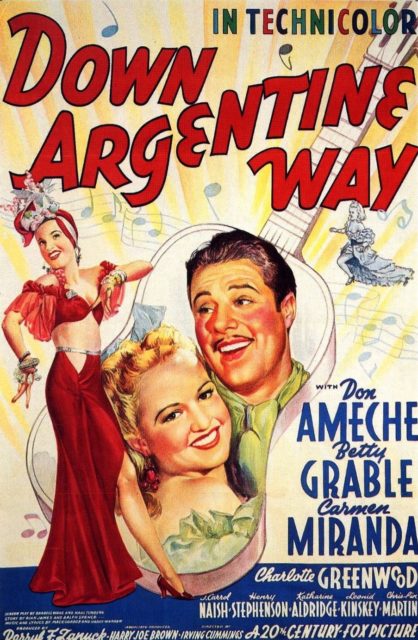 Carmen was a Broadway sensation. She was brought to New York with her backup band, “Bando da Lua,” and critics from all around the US praised her showmanship. That kind of praise did not go unnoticed, and her growing popularity in America quickly earned her a film contract with 20th Century Fox. Her first major movie role would come in the form of a stereotypical, volatile Latina, which would plague the rest of her career. Unable to shake the typecast, Carmen would only be put onscreen as that character. But as much as she was not able to expand her onscreen image, her movies were smash hits, with her most famous being the 1940 technicolor musical, Down Argentine Way.

6. She was the highest-paid actress at her peak 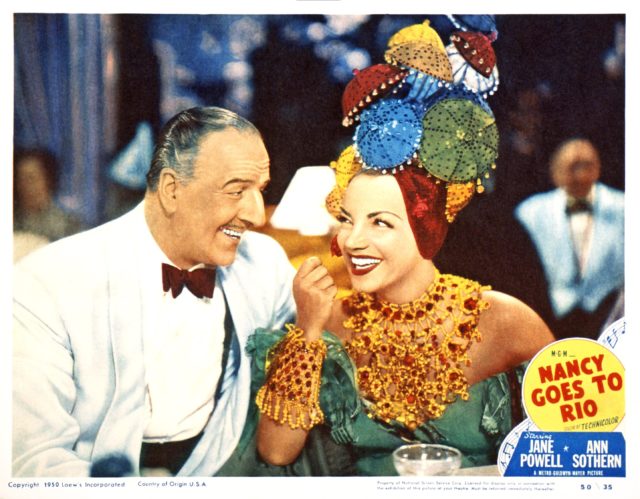 Not surprisingly, all of the success and praise she received in America quickly made her the highest-paid actress in Hollywood. At her peak in 1945, it is estimated that she had earned over $2oo,ooo that year alone, which is approximately $3.2 million by today’s standards. Her catchy songs and swinging hips hypnotized the American population, and people could not get enough of the “Brazilian Bombshell.”

7. She was booed off stage in Brazil 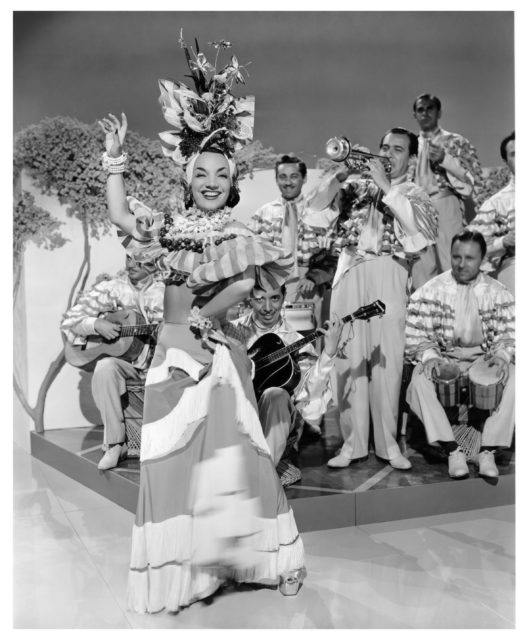 Portuguese-Born Brazilian Actress and Singer Carmen Miranda in her trademark clothes consisting of a fruit hat and skirt as ‘Rosita Rivas’ in a scene from the movie ‘Week-End in Havana’, 1941. (Photo Credit: 20th Century Fox / De Carvalho Collection / Getty Images)

For all of the praise she was receiving in North America, she was not given the same back home in South America. In fact, her number one film, Down Argentine Way, was actually banned in Argentina as people saw it as an insulting and inauthentic portrayal of the country. A large part of Brazil shared these negative feelings toward Carmen, viewing her as an inappropriate, Americanized image of what Brazilian culture really was. On one return trip home, she was booed off stage at a charity event that she had organized. After that, she put herself into exile and did not return to the country for almost 14 years.

8. She was a real estate mogul 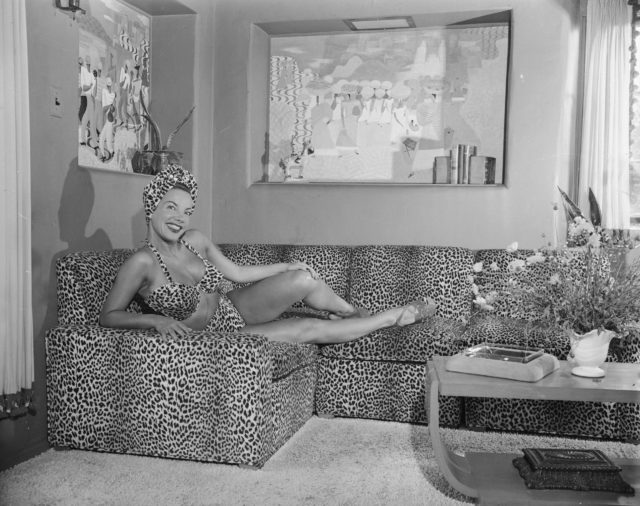 Beyond her music career, Carmen was actually a successful and sound minded businesswoman. She took the money she was earning in Hollywood and invested it so that she was covered should her career start to taper off (the way that it did following the war). She had purchased homes in Beverly Hills, Palm Springs, and Rio de Janeiro, and just in case, also purchased an apartment home in Rio as well. Her investment in real estate, alongside her entertainment earnings, kept her extremely wealthy. 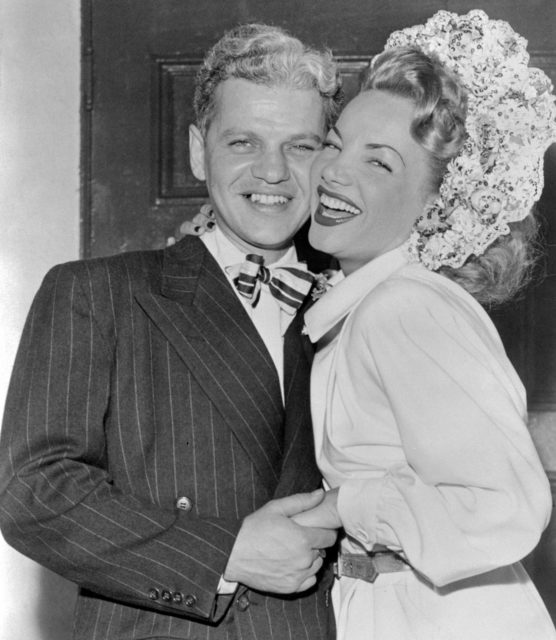 Carmen Miranda and David Alfred Sebastian, film producer, were married at the Church of the Good Shepherd, circa 1947. (Photo Credit: Bettmann / Getty Images)

Carmen liked to party. For years she had suffered from depression and substance abuse, and the constant partying did not help, but up until this point she had been described as being in good health. After taping a show for NBC, she invited some staff and friends back to her home for a night of fun. She danced and performed and enjoyed herself. She did not head to bed until after three in the morning. After completing her nightly beauty routine in the bathroom, she made her way back toward her bed, stopped in the hallway, and collapsed. She had quietly suffered a heart attack. Her husband did not share the same bedroom as her, and he did not discover her until 10:30 am the next morning. She was pronounced dead on August 5, 1955. She was only 46 years old.

10. Her last project almost got scrapped after her death 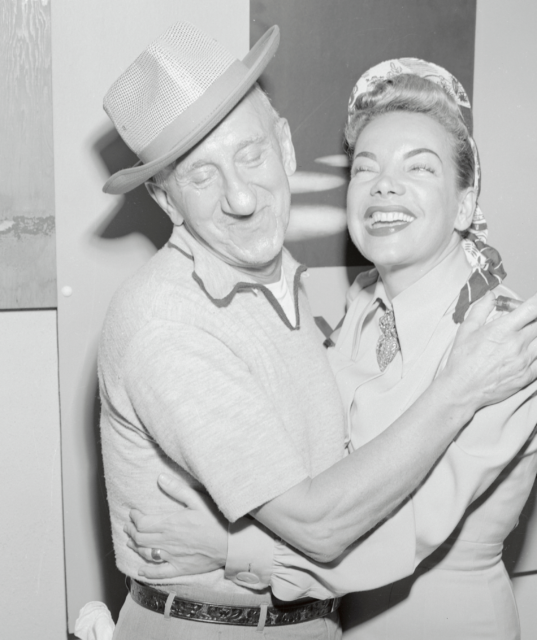 Just one day after she was photographed making merry with comic Jimmy Durante, Brazilian actress Carmen Miranda was dead of a heart attack in Hollywood. The pair are shown August 4th at the filming of a TV show. (Photo Credit: Bettmann / Contributor)

Carmen Miranda’s death was unexpected. She had just finished a TV film with Jimmy Durante for NBC, and the company’s officials were unsure whether they should scrap the episode, considering her surprise heart attack, or if they should let it run anyway. The segment had cost $35,000 to make (roughly $380,000 by today’s standards), so it was a tricky decision to make. Ultimately, they decided to air it, as they believed that was what Carmen would have wanted.

« A Gilded Age Gamble: The Tragic Story of the ‘Dollar Princesses’ That Changed British Society Forever
Elizabeth of York, Beloved Queen of England »