Comfort on the Western Front: The Prostitutes of World War I

Throughout the First World War, industries like weapons manufacturing and agriculture became an essential part of the war effort. But another industry that boomed during the war has been long forgotten by history books: sex work.

The women who provided their services for soldiers on the front lines have a contested history. They often comforted homesick soldiers, distracted from the horrors of war, and even granted many dying wishes. Although they served a major role in the war, the sex workers of World War I have been long forgotten – until now.

In 1916, one in five of all hospital admissions for British troops stationed in France and Belgium were for sexually transmitted infections. While we usually think of time spent on the Western Front as dreary and lonely, visits to the local brothel were a common pastime for many servicemen. 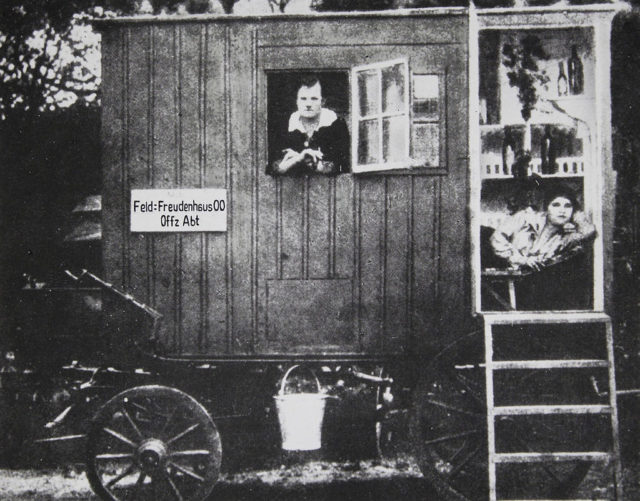 A German mobile brothel for troops close to the front, circa 1916. (Photo Credit: Austrian Archives/Imagno/Getty Images)

Prostitution also changed overnight thanks to the war. Northern France had a network of legalized brothels housing sex workers, who were regularly tested for disease and allowed soldiers on the front or on leave to use their services. As the success of these brothels skyrocketed, other women realized a chance to cash in on the growing market.

Young women afflicted with what was referred to as “khaki fever” began to illegally solicit soldiers for illicit sex, usually out of hotels, bars, or even on the streets. Most military officers turned a blind eye to soldiers seeking these services, and high rates of venereal disease began to force officials to close brothels. Many soldiers actually went to brothels just to contract a sexually transmitted disease in hopes of being sent home! 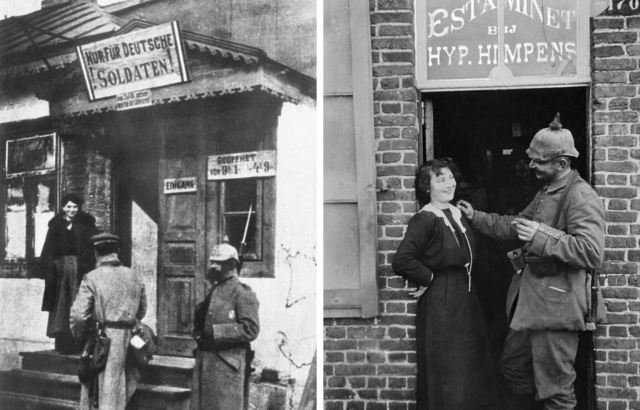 Meanwhile, the French and Germans opened brothels all along the Western Front. Private homes and even castles were seized by the military to house the brothels, which soldiers could use while on duty and on leave. These brothels were segregated by military rank. Officers even had access to more expensive sex workers.

Although the British military encouraged abstinence, the US military actually mandated it – but that didn’t stop them from visiting the brothels. Unfortunately, this meant that American soldiers received less education and treatment for venereal diseases.

Treating venereal diseases also took a toll on field hospitals and medical care. In fact, while most people think of “trench foot” as the leading ailment for soldiers during World War 1, only 74,711 cases of trench foot were treated during the entire war. Meanwhile, the British Army saw 416,891 hospital admissions for venereal disease.

Some soldiers even paid sex workers more to be intentionally infected! Treatment for diseases like syphilis usually took 30 days in a hospital – a welcome vacation for men looking to escape the horrors of life on the frontlines. 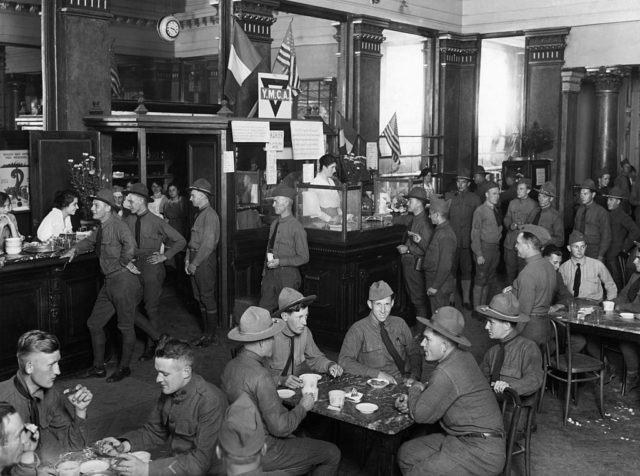 Girls serving refreshments to soldiers inside of the casino now used by the YMCA, showing the old bar in LaSalle de Bacchus, France circa 1918. (Photo Credit: Bettmann/Getty Images)

Sex workers were also a source of great comfort for overwhelmed soldiers. Fighting in the trenches was traumatic, bleak, and isolating, often severely affecting the mental well-being of servicemen. Even a brief visit to the brothel was a positive distraction and to some provided a glimpse of normalcy in a completely foreign world.

Brothels were also a place where soldiers confronted their own mortality. There was usually a spike in customers before each major battle as young men hoped to lose their virginity before their death. Poet Hollie McNish, who studied the prostitutes of World War I as part of an artistic project, was shocked to learn that before the Battle of Loos, “where 80% of men were expected to die, 300 men were lined up outside this one brothel.” 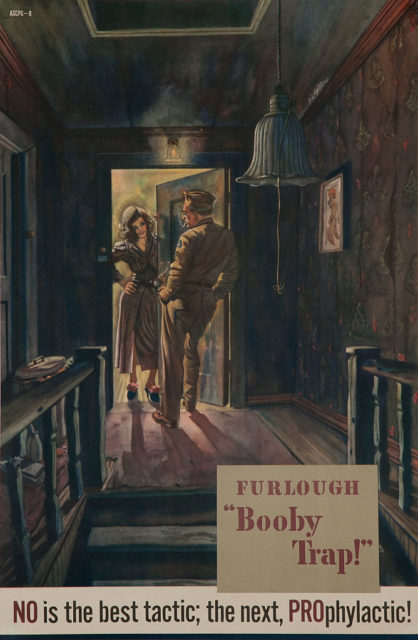 One brothel supposedly offered an early version of Viagra to customers. Recounting his time in the war, Private Fred Dixon of the 10th Battalion, Royal West Surrey Regiment, remembered: “In one estaminet a very kind old French lady was dispensing coffee from a jug and two girls in their late teens were dispensing pills which they assured us would give us additional power in our amorous exploits.”

While many countries seemed to embrace prostitution during the war, after 1918 many countries began to crack down on sex work in an effort to control women’s sexual behavior. Following the February Revolution, Russia abolished prostitution in July 1917. Austria, Czechoslovakia, and Germany abolished government regulation of brothels while Belgium, France, and Italy continued to turn a blind eye to prostitution. 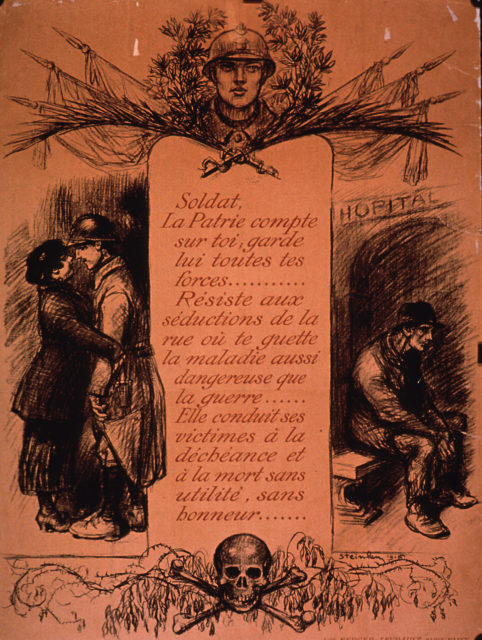 A 1916 French venereal disease poster reads: “Soldier, the country is counting on you, keep all your strength… Resist the seductions of the streets or a disease as dangerous as war awaits you… It leads its victims to decay and death without utility, without honor…” (Photo Credit: U.S. National Library of Medicine/Public Domain)

As for the sex workers who aided the war effort, their stories are all but gone from history. Many of the women in the wartime brothels ended up there because of a series of misfortunes, and the majority of them were illiterate so they left no first-hand accounts behind. Any accounts that were created throughout the war could have been destroyed by military and government officials looking to erase a “disgraceful” part of history that challenges the usual narrative of valiant and righteous war heroes.

More from us: Ballroom Blitz: Meet the Burlesque Dancers Who Boosted British Morale During WWII

While the women working in brothels had a positive impact on the men who sought their services, the women were not treated with the same kindness they showed their customers. Low pay, horrific working conditions, disease, and abuse all were “normal” for prostitutes to experience at the time, and many of the rights of sex workers today haven’t changed much since the war.